If you're not keeping up with AMD Ryzen codenames, the three upcoming chips to watch are Raphael, Dragon Range, and Phoenix. Raphael is the codename for desktop processors sporting Zen 4 cores, DDR5 memory support, and PCIe 5.0 connectivity, and these chips will be in the "65W+" category. Notably for AMD desktop CPUs, these chips will include a small GPU to provide basic display support without a discrete graphics card.


Dragon Range is basically a mobile version of Raphael intended for high-end gaming laptops, while the real laptop Zen 4 processors will be codenamed Phoenix. Much like Rembrandt—the codename for the extant Ryzen 6000-series mobile processors—they will include fewer CPU cores than Raphael, but also a sizable GPU. If rumors are to be belived, that GPU will be from the RDNA 2 lineage.

RDNA 2 is extremely efficient when it isn't being clocked to the sky, yet we were still skeptical when frequent leaker Greymon55 tweeted that Phoenix's GPU could approximate the performance of a 60-watt GeForce RTX 3060 mobile chip. Sure, that's a much weaker GPU than the desktop part bearing the same name, but it's still a capable discrete GPU with its own local GDDR6 memory and everything.

Well as it happens, Phoenix may have some special sauce on the top-end that's allowing it to reach such performance heights: 3D V-cache. According to the latest leak from Greymon55, the rumors of extremely high integrated graphics performance from AMD's upcoming Phoenix processors are down to a model or models equipped with 3D V-cache.


See, powerful integrated GPUs have been a thing for a long time; at least as far back as AMD's Trinity there have been built-in graphics that could play the latest 3D games. The problem has always been one of memory bandwidth—both because system memory has less bandwidth available than typical GPU memory buses, but also because that memory bus is shared with the CPU.
You can solve the bandwidth problem in a few ways. One way is to improve the way your GPU uses its memory bandwidth, and AMD was at the forefront of these efforts with its technologies like Hyper-Z going all the way back to the original Radeon. Another way is to increase the available memory bandwidth, and hot-clocked DDR5 or LPDDR5 will help with this considerably.


The least common way, because it is the most expensive and difficult, is to bolt a fast local cache onto your processor. We last saw this done in the consumer x86 space with Intel's Broadwell processors and their Crystal Well eDRAM die. Those processors, such as the Core i7-5775C, had a 128 MB "L4 cache" on a separate die, and it could be used by either CPU or GPU. It drastically improved graphics performance—as long as your framebuffer could fit in that cache, of course. 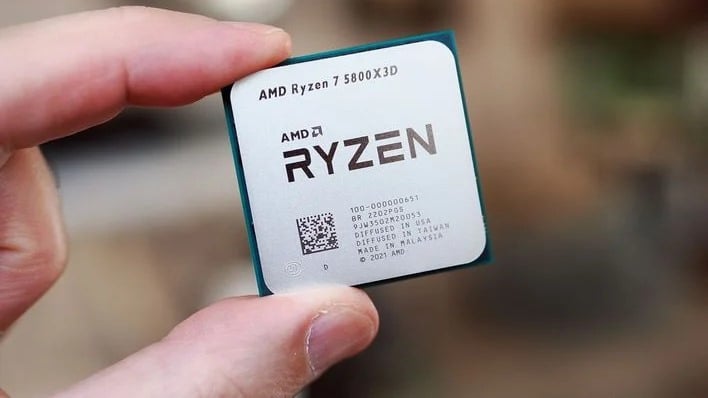 So, AMD's 3D V-cache could present a novel way to solve this problem. We've already seen that tacking on an extra 64MB of cache can do wonderful things for a CPU's gaming performance, but it should be even more notable as an upgrade for gaming on integrated graphics. A CPU with a sizable RDNA 2 GPU attached, fitted with a 3D V-cache die, could certainly present a credible competitor to low-power discrete graphics cards.
Performance on the order of a 60W mobile RTX 3060 would put this purported Phoenix at approximately the same performance level of a desktop Radeon RX 5600 XT, or a GeForce RTX 2060. That would be incredibly impressive speed for a chip with integrated graphics, so we're eager to find out if Greymon55's rumor plays out as true. The leaker himself acknowledges that it isn't confirmed, so we'll just have to wait and see.