It may seem premature to start discussing AMD's next-generation Radeon DNA (RDNA 3) graphics architecture when RDNA 2 parts have barely penetrated the market. Be that as it may, the web is tangled with rumors, leaked information, and juicy nuggets of information. Of particular interest is the supposed makeup of Navi 31.
There is plenty that will manifest between now and when Navi 31 arrives, of course. For example, there is chatter of AMD's unannounced (but very likely forthcoming) Radeon RX 6700 XT will pack a mid-range punch that is on par with and perhaps even faster than NVIDIA's GeForce RTX 3060 Ti. We will have to wait and see.
AMD will undoubtedly flesh out its Radeon RX 6000 series with more offerings as the year goes on as well. But eventually RDNA 3 will arrive, and according to recent chatter, Navi 31 could end up being a chiplet-based GPU, materializing with a multi-chip module (MCM) design. 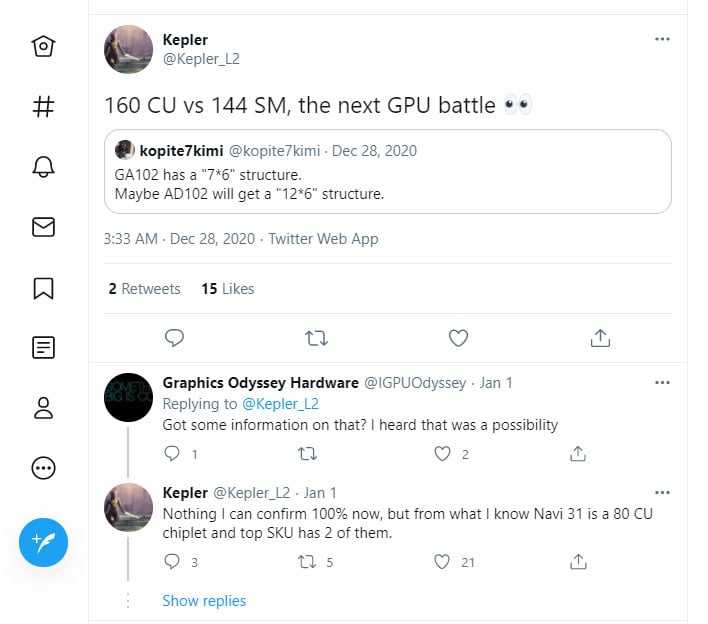 That tidbit comes from a leaker who goes by Kepler (@Kepler_L2) on Twitter. Take it with a dosage of salt (we recommend a pinch or three), but according to the leaker, Navi 31 will utilize an MCM design, with the flagship version sporting two chiplets each with 80 compute units. So 160 CUs in total.
If AMD keeps the ratio between CUs and streaming processors (SPs) the same, that configuration would result in 10,240 stream processors. Or put another way, the CUs and SPs would be double that AMD's current flagship graphics card, the Radeon RX 6900 XT. It's powered by a Navi 21 XTX GPU with 80 CUs and 5,120 SPs.
That alone would result in a monster performance bump, but as we know, it is not just about the raw specifications. The architectural jump from RDNA 2 to RDNA 3 should also deliver some enticing gains in a variety of ways.
A leaker who is more established (@_rogame) offered up some speculation on what this could translate to. By their estimation, Navi 31 in halo form could offer a 2.5x performance uplift over Navi 21. Not only will the specifications get boosted from an MCM design, but we should also be looking at gains from using a bigger Infinity Cache and higher IPC (instructions per clock), compared to Navi 21.
Outside of the potential performance bumps, an MCM approach could offer up other benefits as well. Such as lower manufacturing costs (which hopefully would be passed on to the consumer), improved binning, and the ability to spread out heat, to potentially achieve higher clocks.
It's all pretty much guesswork right now, though, because nothing has been even remotely confirmed. Nevertheless, RDNA 3 has the potential to be a major upgrade.