Imaging is clearly one of the Xperia 1 II’s pillars. But unlike the competition, which is leaning heavily on high-resolution (48MP+) sensors, pixel binning (combining 4 pixels into a larger one for better low-light performance), and sub-pixel interpolation (for better noise reduction and zoom detail), Sony is sticking with 12-megapixel sensors for all three rear shooters on this handset. The reason is simple: speed. Sensors with high pixel counts -- besides having smaller pixels -- generate more data, resulting in slower capture and processing times. 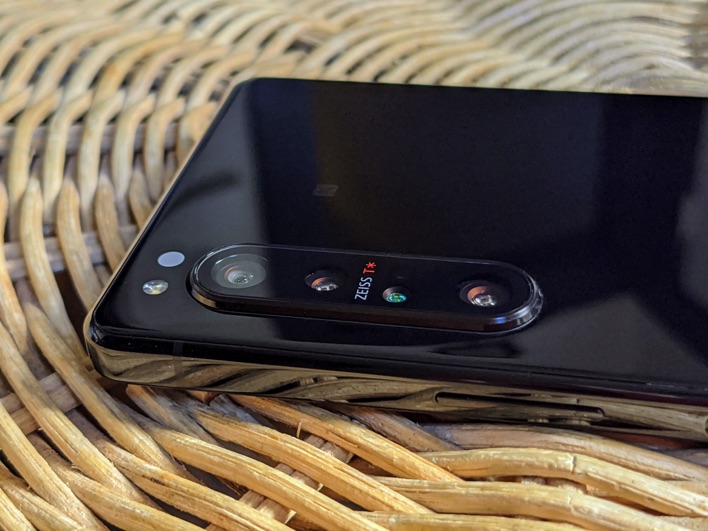 One of Sony’s goals with the Xperia 1 II was to offer 20fps burst photography with perfect face- and eye-tracking (autofocus and exposure) for each frame -- just like with its standalone cameras. That’s no small feat. By keeping the pixel count low, the company was able to achieve this goal and -- as a bonus -- minimize the rolling shutter effect. The entire 12MP main sensor can be read in just 10ms (vs. about 30ms+ for a typical 48MP+ sensor), with AF and AE calculations being performed 60 times per second. That's fantastic for a smartphone.

Shooting modes include bokeh, portrait selfie, panorama, creative (filters), and slow motion. Unfortunately, slow motion video recording maxes out at 720p 120fps, unlike previous Xperia phones, which handled 1080p 960fps just fine. There’s no pro/manual mode in the camera app, but Sony includes two separate apps for this purpose: Cinema Pro and Photo Pro (more on this later). While the camera app mostly functions as you’d expect, the user experience is a mixed bag. There are some annoying quirks which are hard to gloss over.

For example, there’s no manual way to enable night mode or macro mode. Both modes exist, but you’re basically at the mercy of Sony’s AI -- you’ll know which mode is selected thanks to little messages and icons on the viewfinder. Also, unlike every other modern handset, pinching to zoom doesn’t automatically switch between shooters for a seamless 0.7x to 9x zoom. You can only adjust the relative zoom up to 3x for each camera individually. So for 9x absolute zoom, you first have to select the telephoto, then pinch to zoom to 3x.

Autofocus is impressive, at least on paper. The main shooter uses 247 AF points, covering about 70% of the image, and the ToF (time of flight) sensor projects 43200 points to assist with autofocus. All three rear cameras can track faces and eyes (on both humans and animals). We tested face and eye AF on family members and it worked quite well, but they didn’t want their photos published. Sadly, this author has no pets, and the pandemic isn’t conducive to taking pictures of random strangers’ pets in the park.


The Cinema Pro and Photo Pro apps are very Sony, and in a good way. If you’re familiar with the company’s CineAlta and Alpha cameras, you’ll feel right at home -- these apps do a nice job at replicating their user experience. Photo Pro features most of the standalone Sony camera controls (other than aperture, obviously) with 4 main shooting modes -- auto, program, shutter priority, and manual. There’s even realistic haptic feedback for the EV and shutter-speed dials. You also get an HDR toggle, something that’s missing from the regular camera app.

Cinema Pro is geared towards professional 21:9 HDR video recording. It supports up to 4K 60fps stabilized capture with manual control over shutter speed, ISO, focus pull, audio levels, and more. Best of all, it includes a bunch of excellent color modes, including Sony’s awesome Venice CS (color science). Ultimately, while we’ve enjoyed using these pro apps, we’re also very well aware of how niche they are. Then again, not everyone wants to bring their Alpha or CineAlta cameras everywhere they go.


So. what are the resulting photos and videos like? Hit and miss, honestly. The Xperia 1 II’s camera system is pretty decent overall, but it doesn’t stand out among today’s flagships. In auto mode, it sometimes manages to match what Apple or Samsung have to offer, but Sony isn’t in the same league as what we’ve come to expect from Google’s Pixel or Huawei’s P-series handsets. And while the Photo Pro app offers great manual controls and creative options, it doesn’t produce images that are better than the competition.

This isn’t to say that the Xperia 1 II isn’t fun to shoot with or that the 20fps burst mode with face and eye AF tracking isn’t impressive. We were just expecting more considering Sony’s Alpha chops. The only real disappointment is the front shooter, which produces soft pictures no matter what. As for the Cinema Pro app and video recording in general, we have no complaints, and the color science is on point. But once again, other modern flagships perform just as well.

[Some of our sample photos were taken while traveling. While this isn’t ideal right now, it was unavoidable. Know that we always take precautions like wearing masks and doing social distancing when testing phones - Ed.]