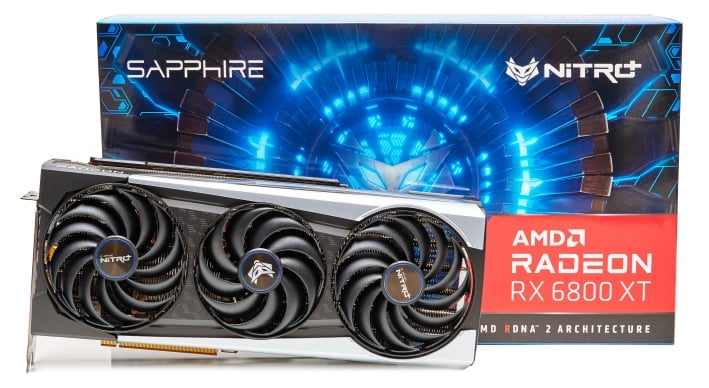 Although the situation is improving, it is still extremely difficult to score some of the latest graphics cards at prices even approaching their MSRPs. With that in mind, we’ve held off on covering some of the hottest GPUs to come through the lab for a while, because the coverage was inevitably (and understandably) met with groans and frustration by some of you. We get it, but the beat goes on, and GPUs are some of our favorite things to cover around here, especially models like the Sapphire Nitro+ Radeon RX 6800 XT we’ll be showing you today.

We’re going to go ahead and spoil this review right out of the gate and say the Sapphire Nitro+ Radeon RX 6800 XT is one of the best “Big Navi” cards out there. This custom Radeon RX 6800 XT takes all of the good things about AMD’s latest high-end GPUs and builds upon them with beefier cooling, distinctive aesthetics, additional features, and ultimately higher performance.

Take a look at the Sapphire Nitro+ Radeon RX 6800 XT’s main features and specifications below and then we’ll dig in a little deeper, and see how she performs and overlocks on the pages ahead... 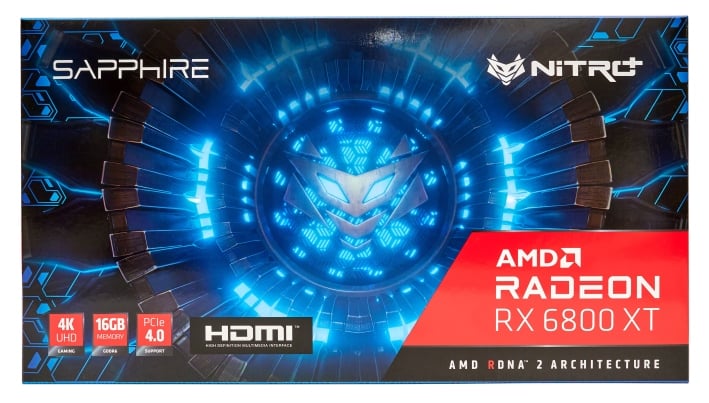 Underneath all of that hardware lies a Radeon RX 6800 XT GPU, with identical core counts and a 16GB GDDR6 memory complement that’s right in-line with AMD’s own reference design. Sapphire, however, has bumped up the expected base and boost clocks, which the card is running in its performance mode. Whereas an AMD Radeon RX 6800 XT has GPU base boost clocks of 2,015MHz and 2,250MHz, respectively, the Sapphire Nitro+ Radeon RX 6800 XT comes in at 2,110MHz (base) and 2,360MHz (boost) and its beefier cooler should allow it to maintain higher clocks, over longer durations as well.

Sapphire’s done quite a bit of work optimizing the cooler on this card as well. The 2.7-slot wide Nitro+ cooler offers similar performance to the ones used on previous-gen Vega-based cards in terms of thermal dissipation, with the GPUs running at similar power levels, but this new model does so at roughly half the weight. Sapphire achieves this in a number of ways. First, the cooler is outfitted with three hybrid fans, which mostly looks like traditional axial-type fans, bit with some aspects similar to blower-style fans – if you look close, you’ll notice the notched ring around the fan blades. These hybrid fans can move much more air than Sapphire’s older axial fan designs.

The wavy design of the heatsink’s fins (dubbed wave fin) also reduces wind resistance and maximizes surface area, to further improve the cooler’s performance. And a ‘V’ shaped fin stack directly over the center of the GPU helps direct air-flow exactly where it’s needed to best cool the chip.

Sapphire also incorporates a discrete set of heatsinks and heat-pipes dedicated to the memory, VRM and chokes on the card. And on that heatsink assembly, Sapphire employs thermal pads on the memory / VRM that reportedly have a higher thermal conductivity than previous-gen offerings. All of that culminates in a higher performing, quieter, lighter-weight cooler. 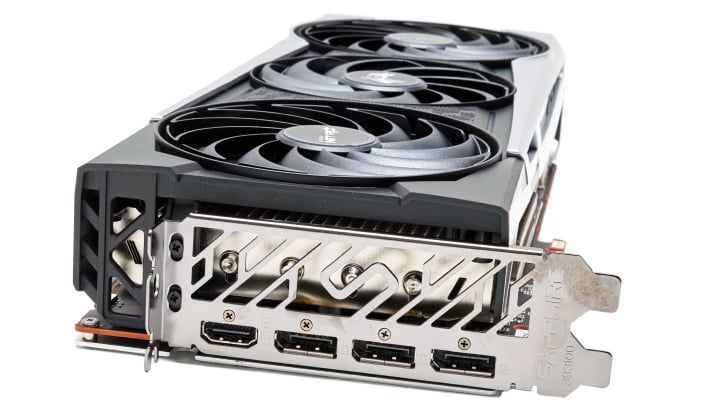 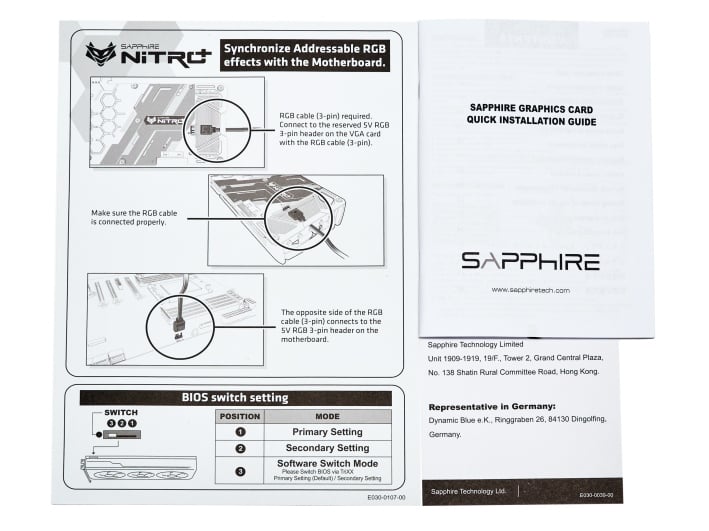 Outputs on the Sapphire Nitro+ Radeon RX 6800 XT include triple, full-sized DisplayPorts and a single HDMI output – all four of which can be used simultaneously. As for power, the card features a pair of standard 8-pin PCI Express connectors and Sapphire recommend a minimum of an 850w PSU. The Sapphire Nitro+ Radeon RX 6800 XT actually has a 350W TDP, which is 50W higher than reference designs. That additional power headroom should help performance and / or overclocking as well.

Now that we’ve got all of those particulars out of the way, it’s time to fire the Sapphire Nitro+ Radeon RX 6800 XT and see how she performs...
NEXT PAGE