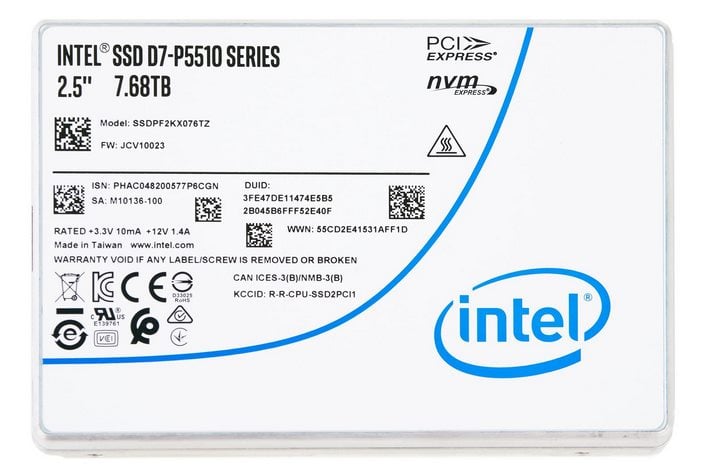 Intel has been making noise in virtually all segments of the storage market as of late. A few weeks back, we took a look at the Optane Memory H20, which combines 3DXpoint media with traditional NAND on hybrid M.2 device to accelerate the storage subsystem in mainstream notebooks and PCs. More recently, we evaluated the blazing-fast, ultra-pricey Optane SSD P5800X for high-performance workstations, and we can't forget about the budget friendly SSD 670p that arrived in early March. Today, we’ll shift our focus to the enterprise space and inspect Intel’s recently-announced PCIe Gen 4 SSD D7-P5510 series, which targets data center applications with high-capacities, and enhanced throughput and latency characteristics versus previous-gen drives.

The Intel SSD D7-P5510 series is significant step forward versus the older SSD DC P4600s. These new drives feature updated, native PCIe Gen 4 controllers and the latest 144-later TLC NAND, along with highly-optimized and re-tooled firmware to boost performance across the board. Take a look at the Intel SSD D7-P5510 series’ high-level features and specification below and then we’ll dive in a little deeper, see what makes these drives tick, and evaluate performance in a variety of benchmarks... 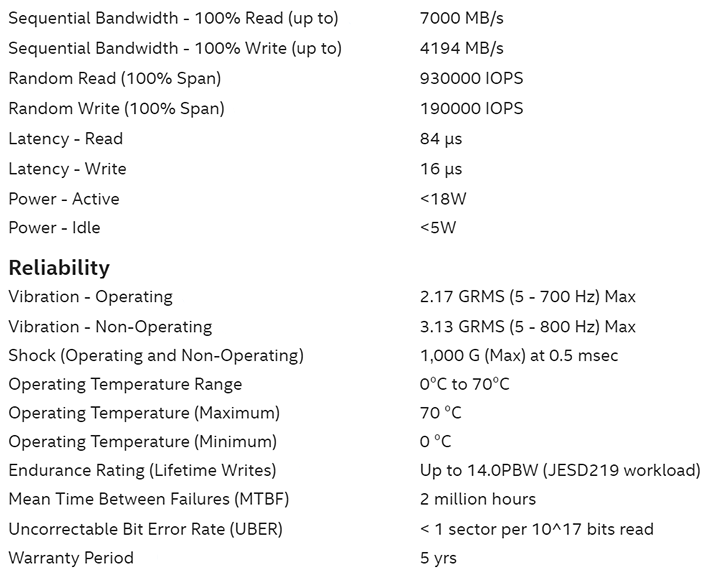 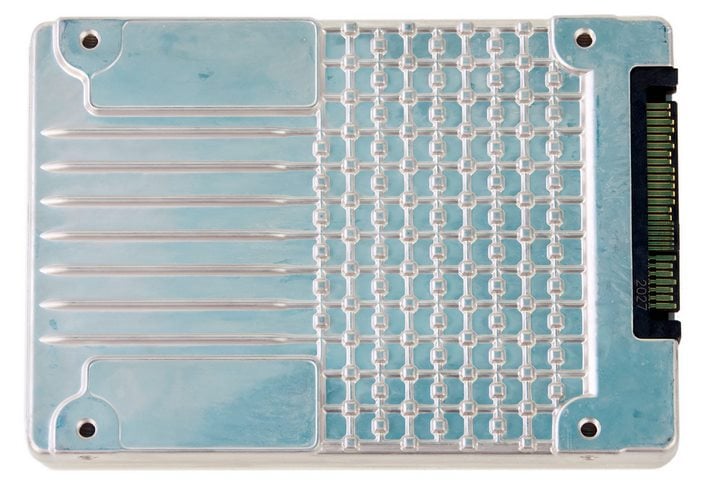 At the core of these drives is Intel’s own EAX-34144 native, PCIe Gen 4 NVMe controller paired to 144-layer TLC 3D NAND and freshly-tuned and optimized firmware to provide improved latency and throughput, with more consistent QoS as well. Moving to the newer 144-layer 3D TLC NAND flash memory on these drives not only allows Intel to provide high capacities and improve the maximum storage density per server, but it also minimizes power consumption; peak power under load is <18 watts with these drives and they idle below 5 watts.

Inside the aluminum chassis, which also act as effective heatsinks that’s to their integrated fins, in addition to the controller and NAND, these drives feature some DRAM (8GB in the case of the 7.68GB model) and capacitors that enable full power-loss protection. Like Intel’s other data-center targeted SSDs, D7-P5510 drives offer end-to-end protection from silent data corruption and include 5-year warranties, with an endurance rating of 1 full drive write per day (up to 14 PBW). We should also mention that the drives offer support for dynamic multiple namespaces, enhanced LBA, scatter gather list as well. 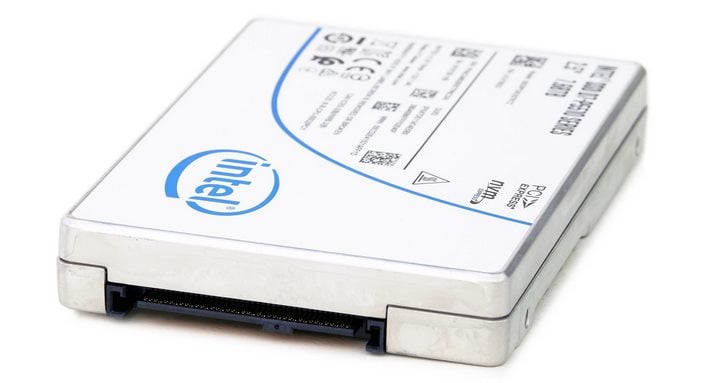 In terms of throughput, the highest capacity 7.68TB SSD D7-P5510 is rated for 7GB/s reads with 4.2GB/s writes. As you’ll see in just a bit, the drive is absolutely capable of hitting these speeds…

Under each test condition, the SSDs tested here were installed as secondary volumes in our testbed, with a separate drive used for the OS and benchmark installations. Our testbed's motherboard was updated with the latest BIOS available at the time of publication and drives were left blank without partitions for some tests, while others required them to be partitioned and formatted. Windows firewall, automatic updates, and screen savers were all disabled before testing and Windows 10 Quiet Hours / Focus Assist was enabled to prevent any potential interruptions. 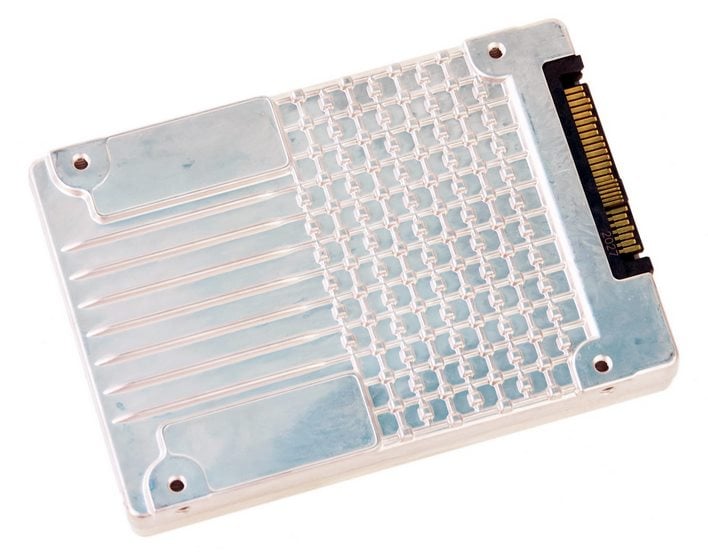 In all test runs, we rebooted the system, ensured all temp and prefetch data was purged, waited several minutes for drive activity to settle and for the system to reach an idle state before invoking a test. All of the drives featured here were tested with their own NVMe drivers installed where possible / available, but the default Windows 10 NVMe driver was used when a proprietary driver was unavailable. Also note, this is the first PCIe Gen 4 data center SSD we've gotten our hands on, so the bandwidth available to the Intel SSD D7-P5510 is effectively double that of the PCIe Gen 3 drives we used for reference comparisons. 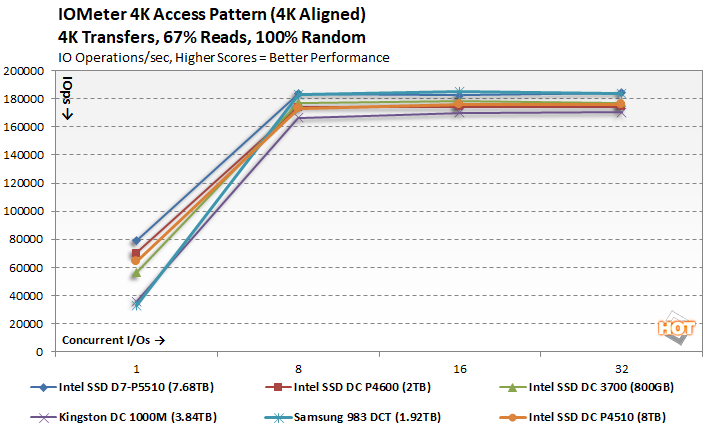 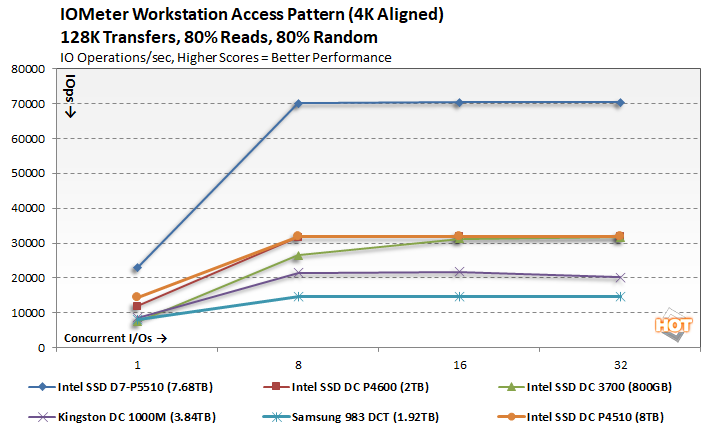 As you can see the Intel SSD D7-P5510 led the pack across the board with the 128K/80/80 access pattern and was class-leading or highly-competitive with 4K fully random transfers as well. 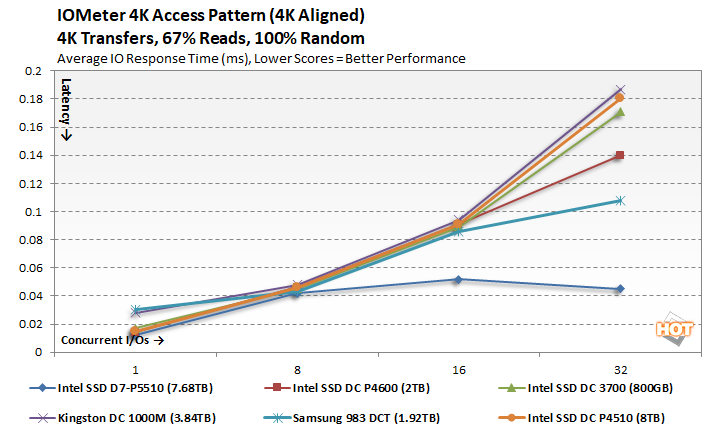 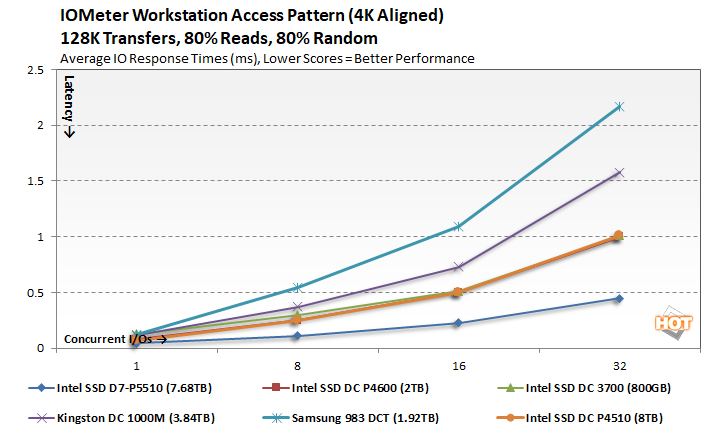 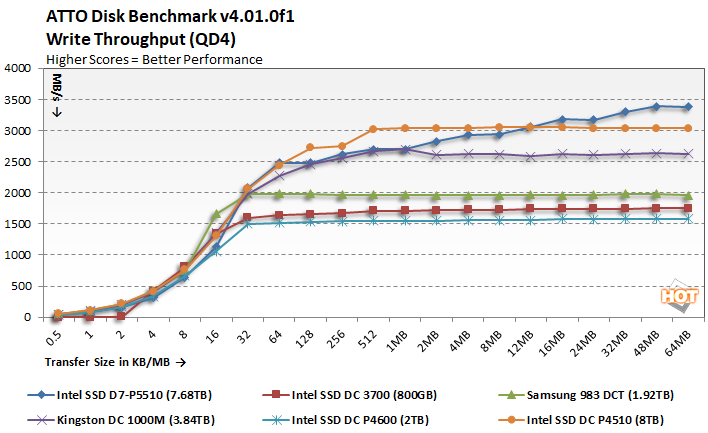 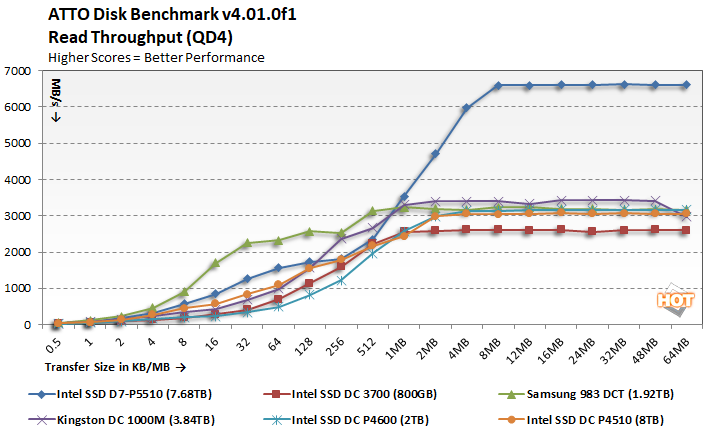 The Intel SSD D7-P5510's write throughput was in-line with some of the faster drives here, until it hit the larger transfer sizes and pull away a bit. In the read test though, the Intel SSD D7-P5510 obviously crushed the PCIe Gen 3 drives and approached it's 7GB/s rating. 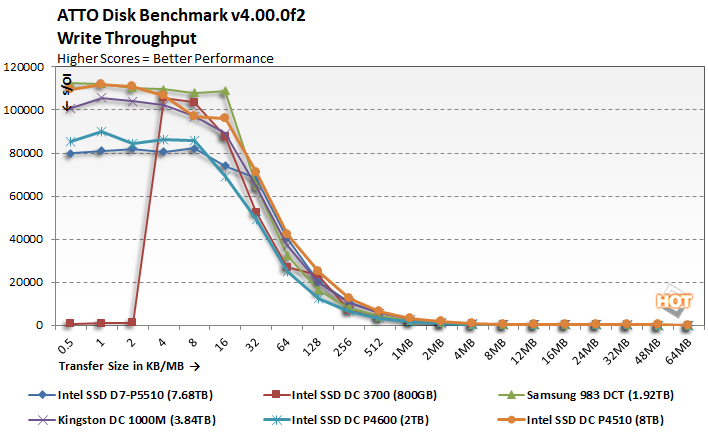 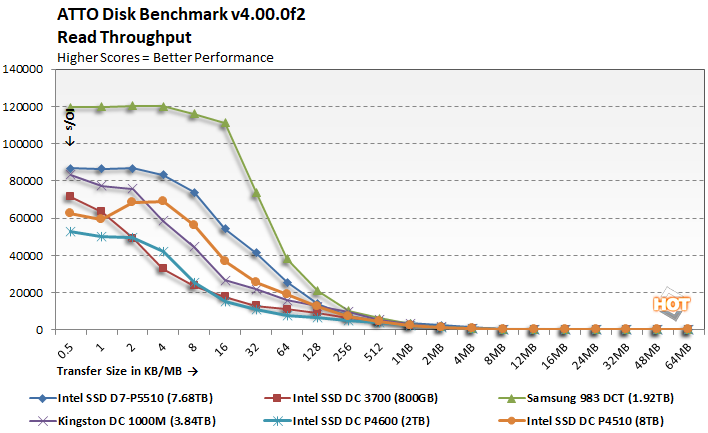 Peak IOs trailed most of the other drives according to ATTO's read test, but it's only the Samsung drive that offered higher IOs in the write test. 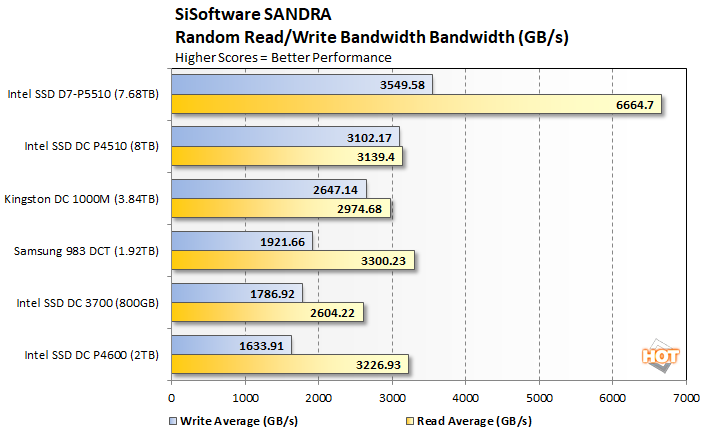 Once again, we see the Intel SSD D7-P5510 offered the highest random read and write performance of the group. As we saw with ATTO, writes were only marginally higher than the competing drives, but reads were more than twice as high. 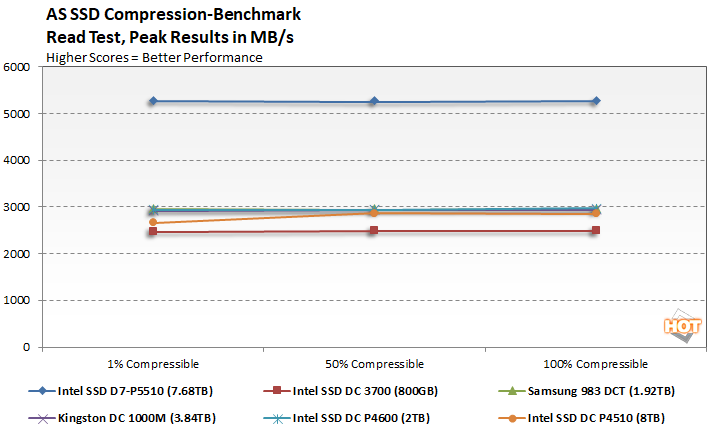 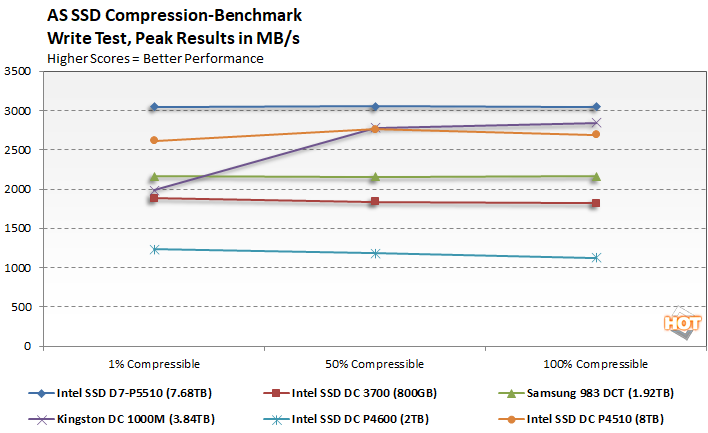 The compressibility of the data being transferred across the drives has little impact on performance. In both the read and write tests, the Intel SSD D7-P5510 lead the pack.
NEXT PAGE