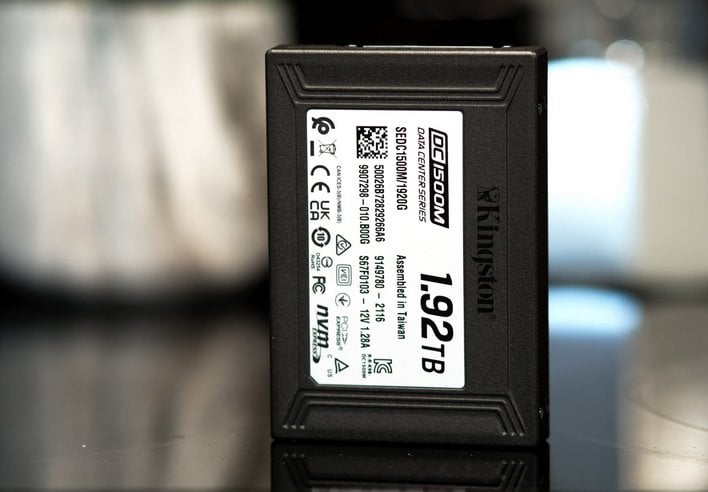 This morning Kingston announced that its latest DC1500M series of enterprise-class solid state drives have begun shipping. Like many of its predecessors in Kingston’s enterprise SSD line-up, the new DC1500M series leverages a hot-pluggable U.2 (2.5”, 15mm) form factor, that’s compatible with common U.2 backplanes. The drives are tuned for mixed-use case, data-intensive workloads, including cloud computing, web hosting, high-performance computing (HPC), virtual infrastructures, and AI and deep learning applications.

There are four drives in the initial Kingston DC1500M SSD line-up, starting with a 960GB model and maxing out with a beefy 7.68TB behemoth. We’ve got a 1.92TB model on hand for testing, which we’ll be showing you here. If you check out the drives’ main features and specifications below, you’ll notice that not much separates the various drive models in the DC1500M series, save for differing write speeds and IO performance, depending on the capacity. Take a look for yourself and then we’ll dig in a little deeper and see how the Kingston DC1500M performs in comparison to a handful of its peers... 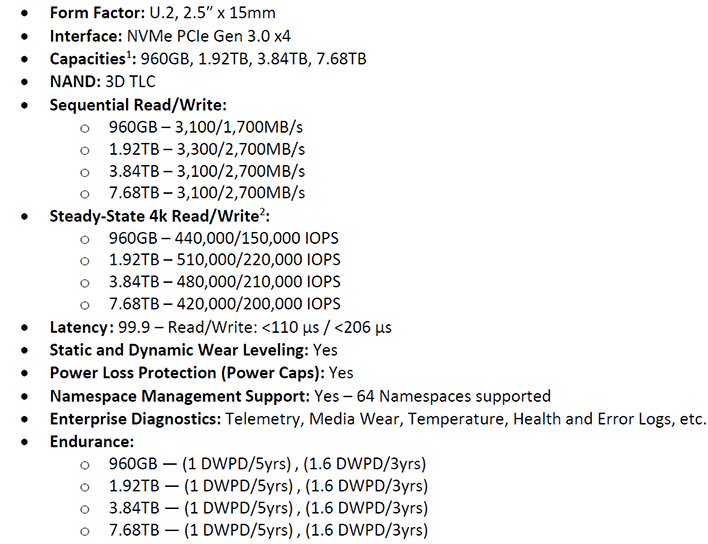 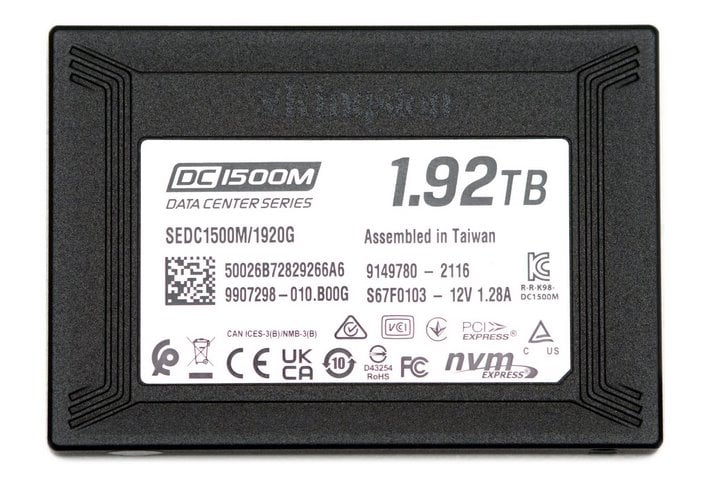 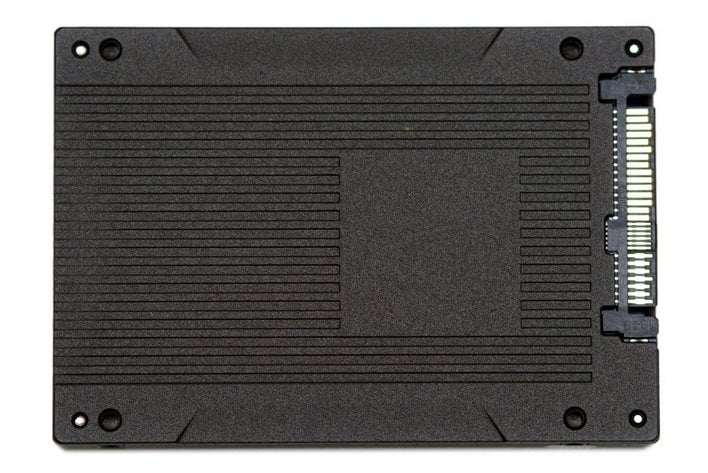 Endurance is rated for 1 DWPD (Drive Write Per Day) for 5 years or 1.6 DWPD over 3 years. As you would expect from modern SSD, the drives offer reliability and usage statistics tracking, SMART monitoring, static and dynamic wear leveling, and temperature sensors, which are important to data center use cases. They also offer end-to-end data path protection, multiple namespace management, power loss protection (PLP), and telemetry monitoring. The support for multiple namespaces is one of the key features that help set the DC1500M apart from its predecessors. Through its updated firmware, the drives support up to 64 namespaces.

Power consumption varies depending on the capacity, but ranges from the 6.3W to 7W range while idle, and 6.21W – 7.3W for average reads. Average writes fall in the 11.4W – 17.14W range and maximum writes top out at 12.24W – 20.88W. All of the drives carry a limited 5-year warranty, with free technical support, which is somewhat standard for this class of product.

Under each test condition, the SSDs tested here were installed as secondary volumes in our testbed, with a separate drive used for the OS and benchmark installations. Our testbed's motherboard was updated with the latest BIOS available at the time of publication and Windows firewall, automatic updates, and screen savers were all disabled before testing. Windows 10 Quiet Hours / Focus Assist was also enabled to prevent any potential interruptions. 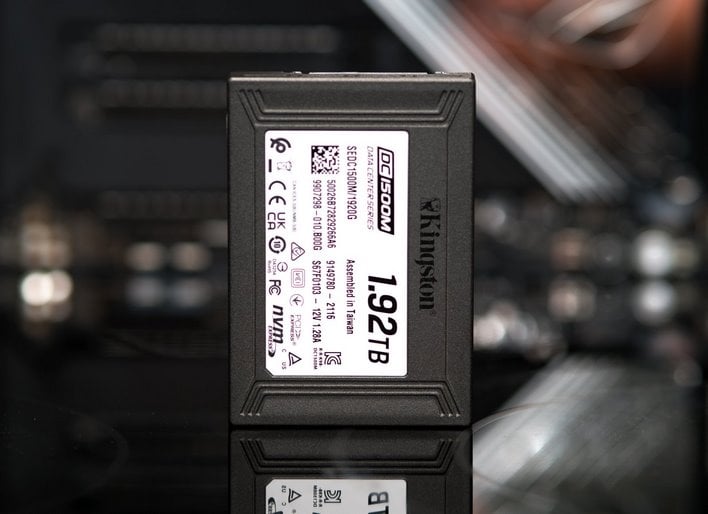 In all test runs, we rebooted the system, ensured all temp and prefetch data was purged, waited several minutes for drive activity to settle and for the system to reach an idle state before invoking a test. All of the drives featured here were tested with their own NVMe drivers installed where possible / available, but the default Windows 10 NVMe driver was used when a proprietary driver was unavailable.

In the following tables, we're showing two sets of access patterns; a custom Workstation pattern, with an 128K transfer size, consisting of 80% reads (20% writes) and 80% random (20% sequential) access and a 4K access pattern with a 4K transfer size, comprised of 67% reads (33% writes) and 100% random access. Queue depths from 1 to 32 were tested... 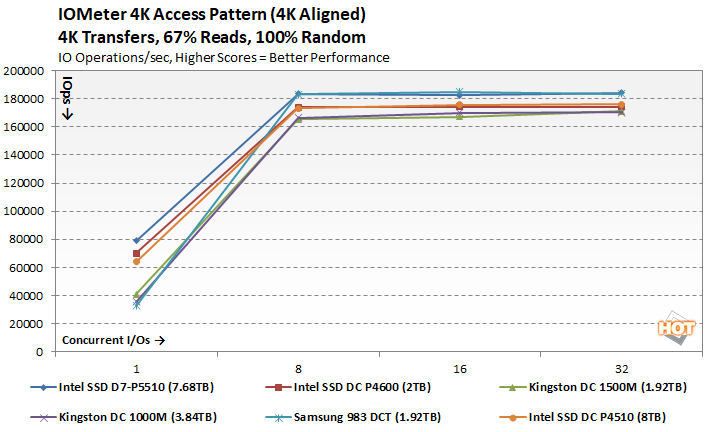 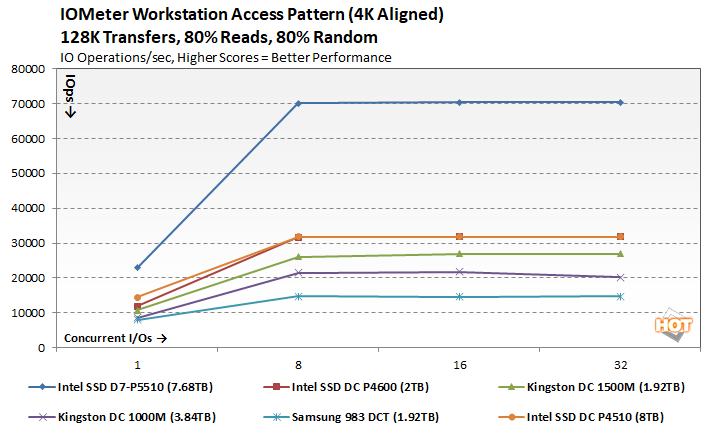 The new Kingston DC1500M finished about in the middle of the pack with both of the access patterns, versus the other PCIe Gen 3 drives we tested (the Gen 4 Intel SSD D7-P5510 finished well ahead of the Gen 3 drives).

The actual bandwidth numbers averages across the various queue depths we tested show the Kingston DC1500M just barely edging out the DC1000M in the fully random 4K test, but once we move onto the larger transfers and work in some sequentials, the Kingston DC1500M jumps well out in front of its predecessor and inches closer to the much pricier Intel SSD DC P4600. 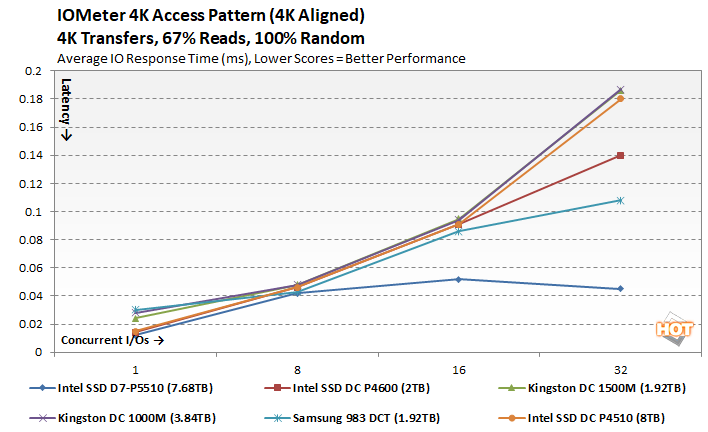 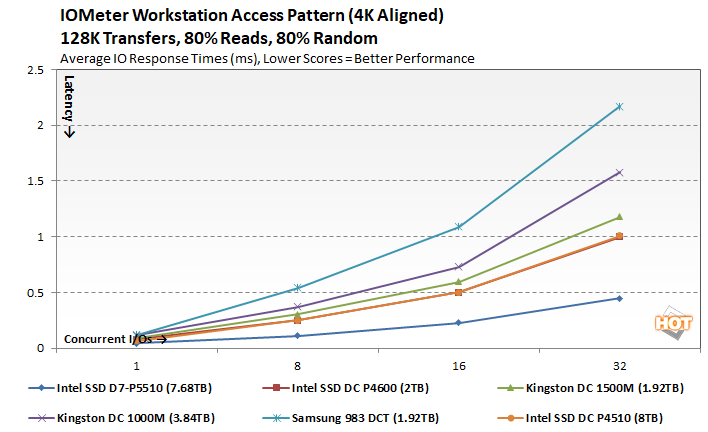 Latency characteristics for all of the drives were fairly close at QD1, but the spread is much wider as the queue depth is increased. The Kingston DC1500M had somewhat higher latency then the competition overall, but it remains in the same ballpark with the other PCIe Gen 3 drives.

ATTO is straightforward disk benchmark that measures transfer speeds across a specific volume length. It measures raw transfer rates for both reads and writes and graphs them out in an easily interpreted chart. We chose .5KB through 64MB transfer sizes and a queue depth of 4 over a total max volume length of 256MB. ATTO's workloads are sequential in nature and measure bandwidth and IOs, rather than response times, access latency, etc. 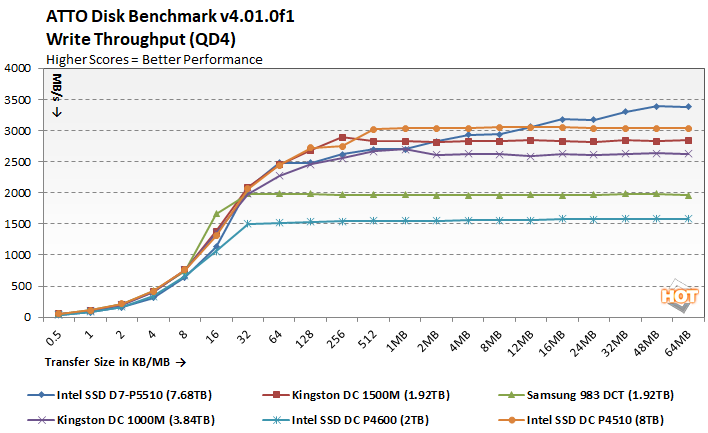 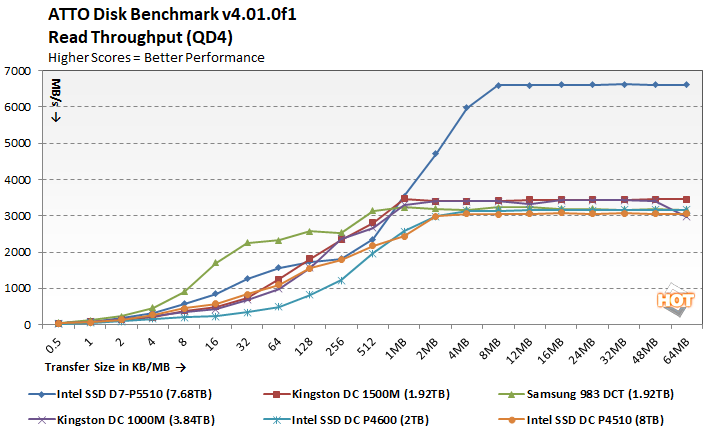 The Kingston DC1500M offered competitive read and write bandwidth across the board, in comparison to the other PCIe Gen 3 drives at least. The PCIe Gen 4 Intel drive ran away from the competition in the read test, however. 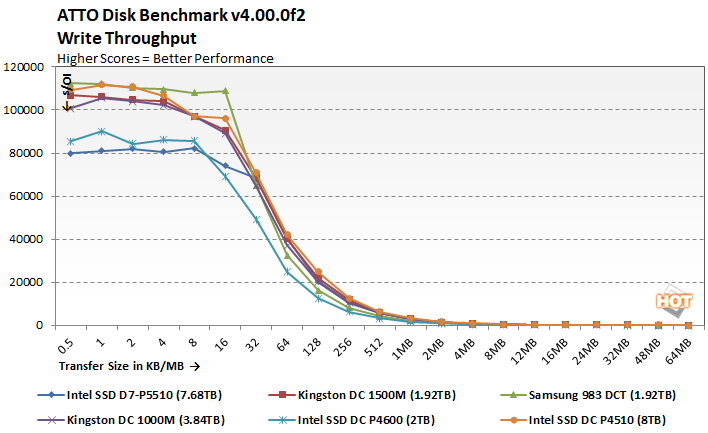 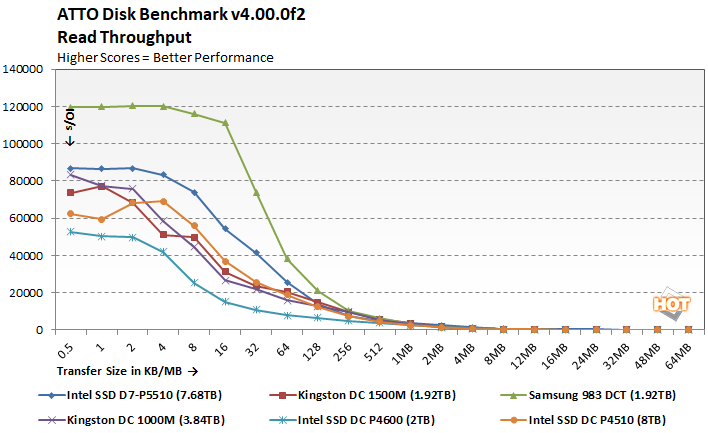 Peak IOs were also competitive for the Kingston DC1500M, and hovered around the middle of the pack in both the read and write tests. 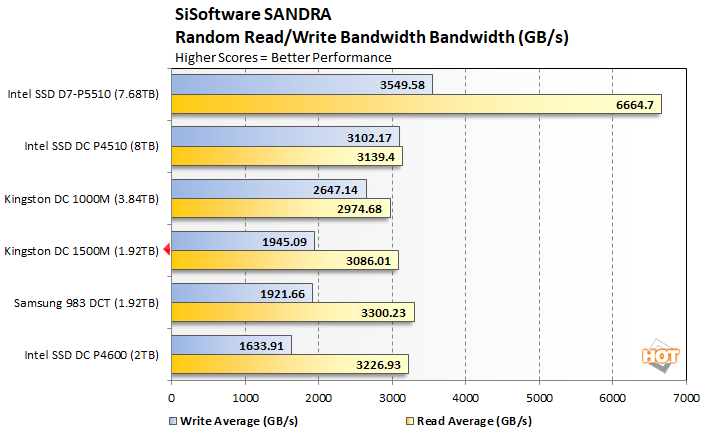 The the 1.92TB Kingston DC1500M we tested offered lower random write performance than its 3.84TB predecessor, but the newer drive put up slightly better random reads. And, as you can see, it remained competitive with the other Gen 3 drives throughout. 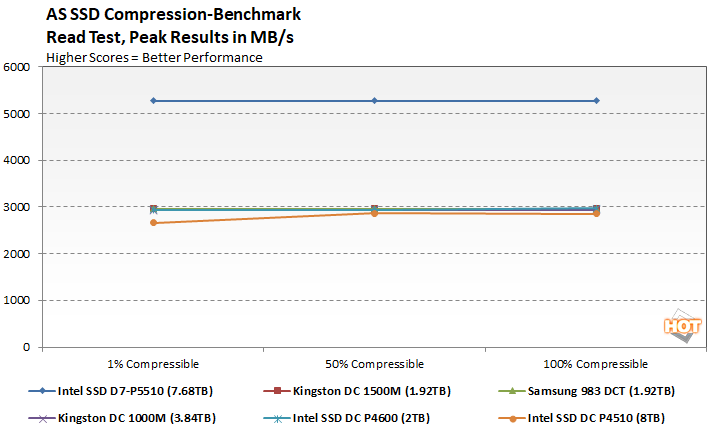 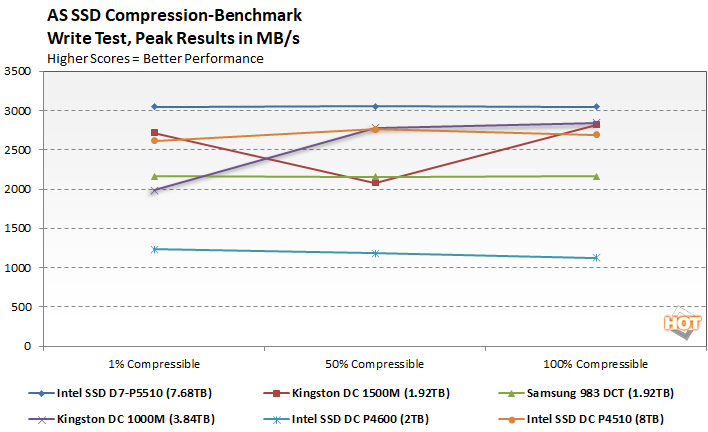 The compressibility of the data being transferred across the Kingston DC1500M had minimal impact on performance, though the drive did exhibit somewhat of a saw-tooth pattern with AS-SSD's workloads that resulted in larger than expected swings in performance throughout the test.
NEXT PAGE