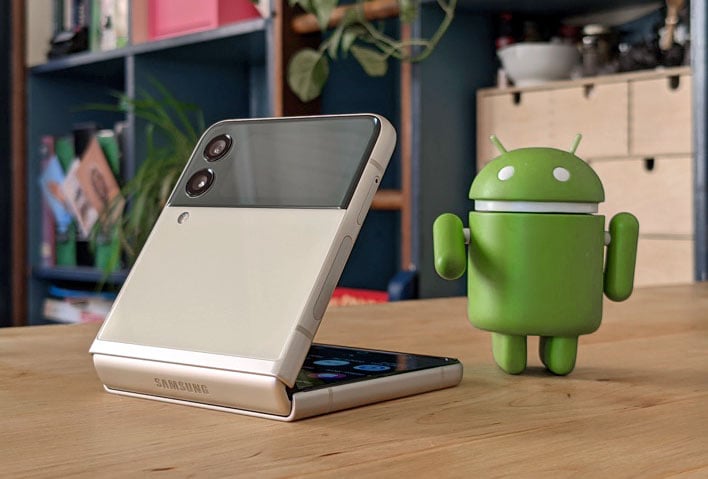 Two years ago, Samsung ushered the era of folding phones with the daring (but ultimately flawed) Galaxy Fold. In 2020, the company followed suit with three much improved foldables -- the stylish Galaxy Z Flip, Z Flip 5G, and the powerful Galaxy Z Fold2. With most of the kinks worked out (pun intended), these excellent handsets were finally worth recommending, though cost and durability were still obstacles for many.

But things are different today. Samsung’s new water-resistant $1800 GalaxyZ Fold3 and $1000 Galaxy Z Flip3 are more affordable and life-proof than ever. While the Fold series transform from a phone into a small tablet, the Flip models are basically standard handsets that just happen to fold in half -- think productivity vs. style. And while the Z Fold3 is more powerful than ever, the Z Flip3 is more fashionable than ever -- like those sweet flip phones of old.

We’ve just spent a week with the Galaxy Z Flip3 and frankly, we’re smitten. Not only is this folding phone much better (and cheaper) than its predecessors, but it’s both usable and fun. So what’s changed? What compromises remain, if any? Is this the handset that will bring foldables mainstream? Find out right here in our full review. But first, check out Marco's quick hands-on video...

When open, the Galaxy Z Flip3 looks and feels like any other glass and aluminum flagship with a 6.7-inch AMOLED display and twin rear shooters. The party trick here is that this phone folds in half like a makeup compact, thanks to a flexible ultra-thin glass screen and a special hinge. Once closed, the Z Flip3 reveals a second, 1.9-inch AMOLED cover display next to the aforementioned dual camera system in what is now the front of the handset.

This glass panel is split horizontally, with the top 3/8 or so (which protects the second screen and incorporates the two shooters) being black, and the rest (which houses the LED flash) matching the color of the remaining glass. Our Cream review unit came with a gold aluminum frame and hinge (sporting an etched Samsung logo) -- the other hues are Phantom Black, Green, Lavender, White, Pink, and Gray. 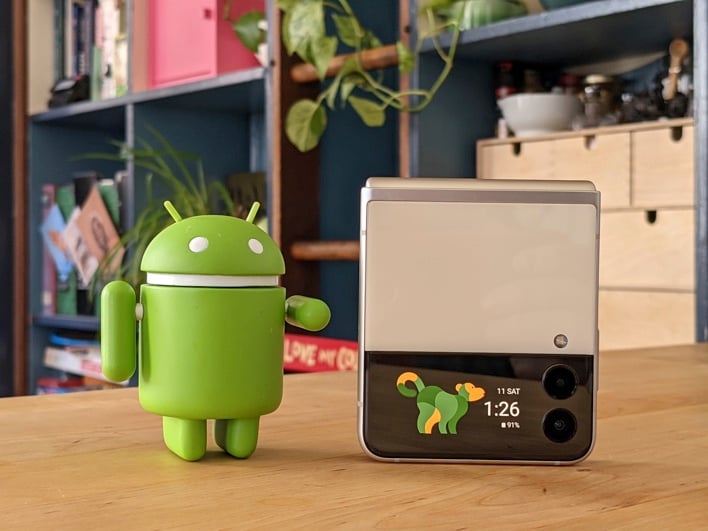 As a whole, the Z Flip3’s design is extremely refined. The only imperfection -- if we’re being picky -- is the necessary small gap by the hinge between the two halves of the phone when it’s shut. Open the phone again and you’ll see a punch hole for the selfie camera in the top center of the main display. Unlike the rounded edges on last year’s Z Flip and Z Flip 5G, the Z Flip3’s sides are flatter -- think iPhone 11 vs. iPhone12.

Speaking of edges, with this handset open, there’s a volume rocker and power / lock key with an integrated capacitive fingerprint reader on the right side, plus the SIM tray and a mmWave 5G antenna on the left. You’ll find one of the speakers, USB Type-C port, and a pair of microphones on the bottom edge, plus another mic on top. When the Z Flip3 is closed, the volume rocker and power / lock key are on the right side of the top half. 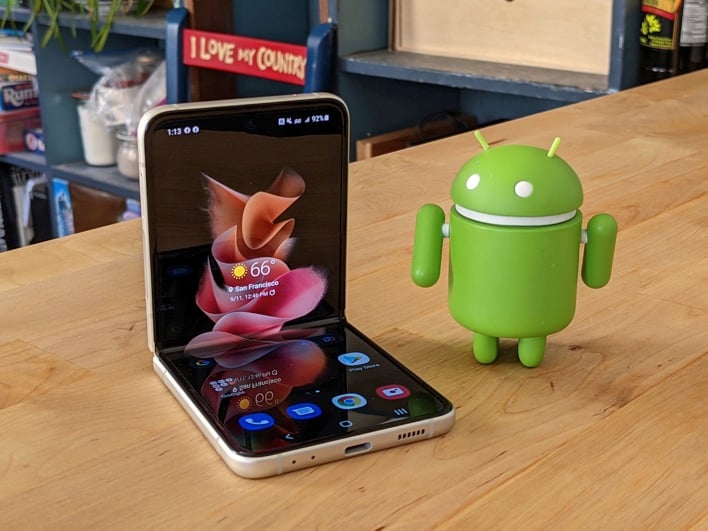 In addition to boasting a much sleeker design and slightly bigger cover display than last year’s Z Flip and Z Flip 5G (1.9 vs 1.1in), the Z Flip3 is also water resistant, with an IPX8 rating, which is an amazing feat for a folding phone. Note the X, though, which means the Z Flip3 is not dust resistant. So keep that in mind when you're hanging out at the beach. Overall, we love what Samsung’s done here design-wise -- this hardware is incredibly hot. Check out the specs below.

While this is a gorgeous display, there are a couple minor drawbacks. First, there’s a visible (and tangible) crease where the screen folds in half. You get used to it, but it’s there. In addition, this flexible panel is covered in a plastic screen protector, so you’re not actually touching glass. And while it can be removed, Samsung advises against it. This means there’s a small gap between the screen protector and the bezels that likes to catch dust. 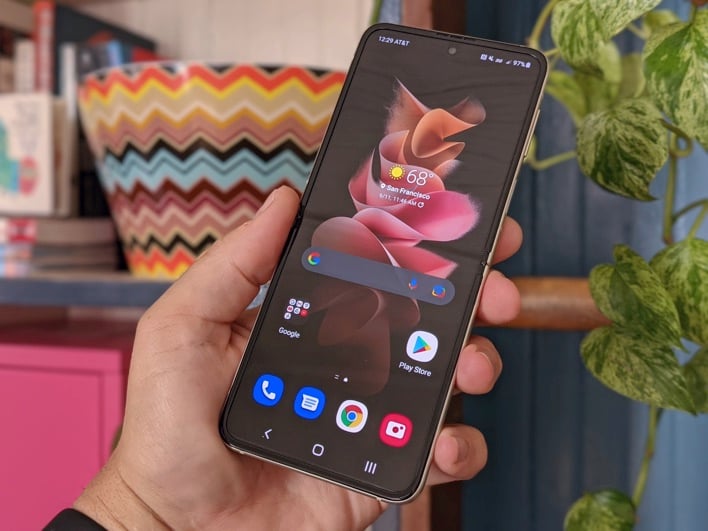 Second, the bezels -- while thin -- aren’t flush with the display. There’s a tiny lip all around the screen that makes edge swipes and other gestures more difficult. As for the cover display, it’s a 1.9-inch (512 x 260 pixels, 302ppi) AMOLED panel with a 18:9 aspect ratio located outside, on the top half of the phone (when it’s closed). It’s a nice display as well, but it’s harder to read in the California sun.

When it comes to imaging, the Galaxy Z Flip3 inherits the Z Flip and Z Flip 5G’s three shooters. These consist of a 12MP f/1.8 1.4-micron main sensor with dual-pixel PDAF and OIS, a 12MP f/2.2 1.12-micron 123-degree ultrawide lens, and a 10MP f/2.4 1.22-micron selfie camera. While Samsung’s basically recycling parts here -- the main shooter dates back to the Galaxy S8 -- this is a proven camera system that delivers excellent results. 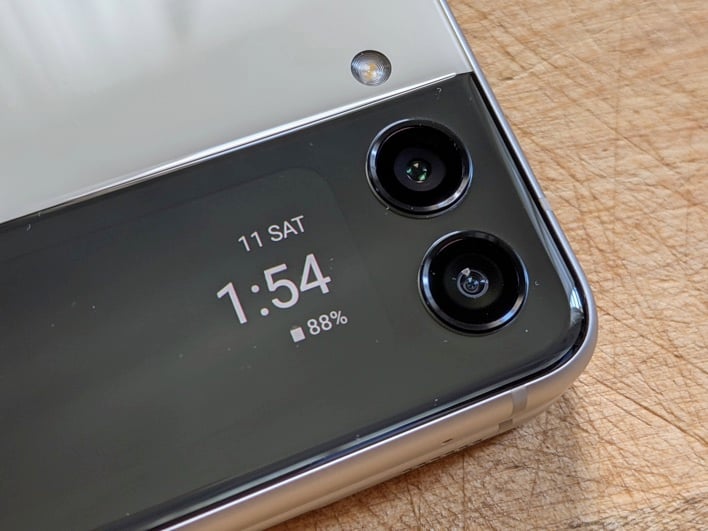 But wait, there’s more. Additional modes include AR doodle (which lets you create AR drawings over your scene before taking a photo), director’s view (which records video with the front and rear shooters at the same time), and Single Take (which captures a bunch photos and videos in variety of styles, angles, and formats for up to 10 seconds while you move the phone around). While none of this is new, the Z Flip3 also brings some unique features.

First, the camera supports landscape video recording (16:9, up to 1080p 60fps) when holding the Z Flip3 vertically, which is very cool. We’d love to see this on other handsets. Combine this with Flex Mode and the (half open) phone becomes its own tripod -- more on Flex Mode later. Second, you can mirror the viewfinder on the cover display so others can see what you’re shooting -- or for selfies -- which is pretty smart.
Better yet, you can use the cameras when the Z Flip3 is closed. Just double-press the power / lock key and the viewfinder appears on the cover screen. Swipe left or right to switch between photo and video modes, and swipe up or down to switch between the main and ultrawide shooters. Tap the display (2-second timer) or press the volume rocker (no timer) to take a photo or video. It’s simple and intuitive.

The only drawback when using the cameras with the phone closed is that everything is captured in a square (1:1) format, and there’s no way to change this in the settings. Still, the main and ultrawide shooters are significantly better than the selfie camera, so keep that in mind. And if you want to change the aspect ratio, simply open the Z Flip3 and mirror the viewfinder to the cover screen to get the best of both worlds.
So, how do the Z Flip3 shooters perform? The resulting photos and videos are quite lovely. While the hardware is somewhat dated, Samsung keeps improving its software, and the Snapdragon 888 lends plenty of muscle for image processing. Pictures are detailed, with accurate color balance and exposure. Dynamic range is decent, and low-light performance is solid, thanks to night mode and OIS (on the main lens).

Samsung still cranks the saturation and sharpness up a little too much for our liking -- at least in some images, but it’s less prevalent than it used to be. With only a 12MP main sensor to play with, zooming isn’t the Z Flip3’s forte, but we managed to get usable shots up to 2-3x magnification. Video quality is top notch here, and we’re happy to see 4K 30fps and 1080p 60fps support (with stereo audio) for all three shooters.