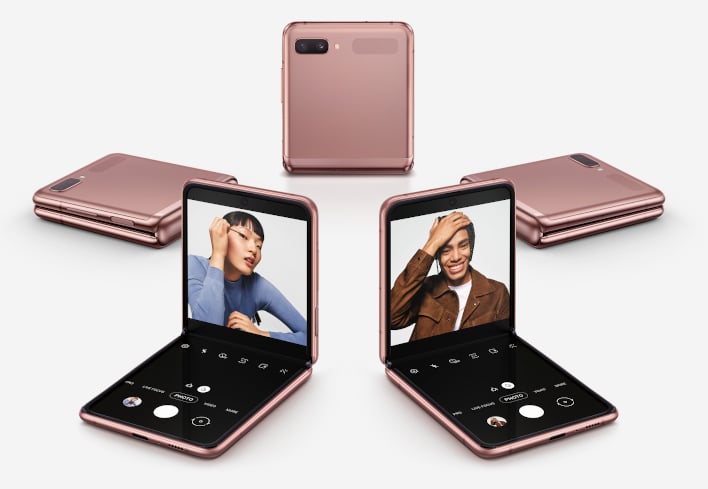 Samsung threw us a curveball this morning by officially announcing its oft-leaked Galaxy Z Flip 5G a few weeks early. We were expecting the smartphone to be announced on August 5th at Galaxy Unpacked, but here we are without the usual fanfare.

The Galaxy Z Flip 5G doesn't change the formula too much compared to the original, but it does ditch last year’s Qualcomm Snapdragon 855+ SoC in favor or the new flagship Snapdragon 865+ Mobile Platform. As its updated naming suggests, that means that the smartphone now includes standard 5G wireless connectivity courtesy of the Snapdragon X55 modem.

Samsung also revealed that the Galaxy Z Flip 5G will be available in two new colors: Mystic Gray and that gorgeous Mystic Bronze that we've seen in leaked images. Other than the new colors and switch to the Snapdragon 865+, Samsung doesn't appear to have made any other significant [physical] changes to the smartphone.

However, one other big change that comes with the Galaxy Z Flip 5G is with regards to pricing. While the original smartphone debuted at $1,380, the Galaxy Z Flip 5G is priced $70 higher at $1,450. That's quite a lot of money to lay down for a 5G smartphone, but the folding display definitely comes with a pricing premium compared to more traditional smartphones with fixed glass displays.

The Galaxy Z Flip 5G will be available starting on August 7th from AT&T and T-Mobile, where you can take advantage of carrier financing offers. Or, if you'd rather get buy the device outright, you can get it direct from Samsung.com, Best Buy or Amazon.com. Purchases from Samsung.com will also be eligible for up to a $650 trade-in credit.