We tested the Galaxy S22 Ultra and S22+ primarily on T-Mobile’s sub-6GHz 5G network and Verizon’s mmWave 5G network in and around San Francisco, and didn’t have any problems. Calls sounded loud and clear, and data speeds exceeded our expectations, with downloads reaching 3.5Gbps on Verizon’s mmWave 5G network. For comparison, the Galaxy S21 Ultra only manages 2.6Gbps in the same location.

Clearly, Qualcomm’s new integrated Snapdragon X65 5G modem is a major upgrade. Unlike most Android competitors, these handsets support every flavor of 5G currently available in North America, including C-band, and are certified for all three major US carriers. Our review units, which came unlocked, also worked fine on AT&T’s 5G network.
On the audio front, all three S22 models feature AKG-tuned stereo speakers with Dolby Atmos. Sound quality from both the S22 Ultra and the S22+ is solid, matching the outgoing S21 Ultra and other flagships like the Pixel 6 Pro. The S22 series also includes aptX HD and LDAC for high-quality wireless audio over Bluetooth, but only supports digital USB Type-C devices, so you’ll need an external DAC for wired audio.

All three Galaxy S22 models use 4nm processors – either Qualcomm’s flagship Snapdragon 8 Gen 1 in markets like North America, or Samsung’s in-house Exynos 2200 in other regions. As you’d expect, our US review units came with the Snapdragon 8 Gen 1. Memory and storage options also vary, with 8 or 12GB RAM plus up to 1TB of storage for the S22 Ultra, and 8GB RAM plus 128 or 256GB of storage for the S22/S22+.

Interestingly, the base configuration for the S22 Ultra only packs 8GB RAM, unlike its predecessor, which offered 12GB on the entry model. On the flip side, storage options now include a new 1TB tier in addition to the usual 128, 256, and 512GB configurations. But regardless of which S22 model you pick, you’ll enjoy fast LPDDR5 RAM and UFS 3.1 storage. Just don’t expect micro SD support.

Performance-wise these phones feel ultra smooth and super quick. We didn’t notice any differences between the S22 Ultra (12GB of RAM) and the S22+ (8GB of RAM). Both handled our usual collection of day-to-day apps – from productivity to communication to entertainment to gaming – without breaking a sweat. We also didn’t experience any glitches or slowdowns, even when switching between dozens of apps.

Our benchmarks confirmed the Snapdragon 8 Gen 1’s best-in class performance, with GPU workloads in particular benefiting from a major boost in speed over last year’s Snapdragon 888. Throttling is more of an issue than what we recorded with last year’s Galaxy S21. Both the S22 Ultra and S22+ exhibit a major drop in performance (up to 50%) within the first 20 minutes when running sustained workloads (see details below). 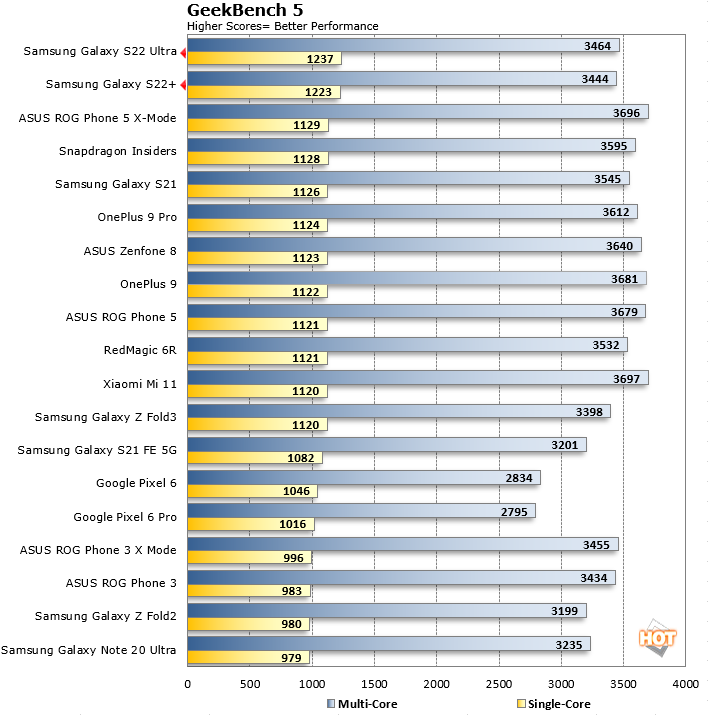 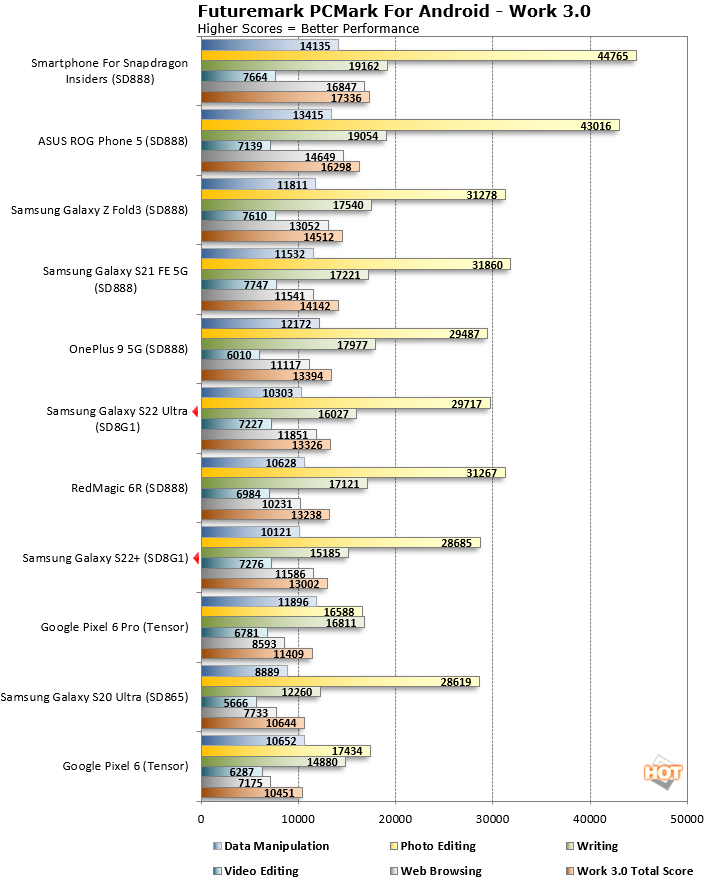 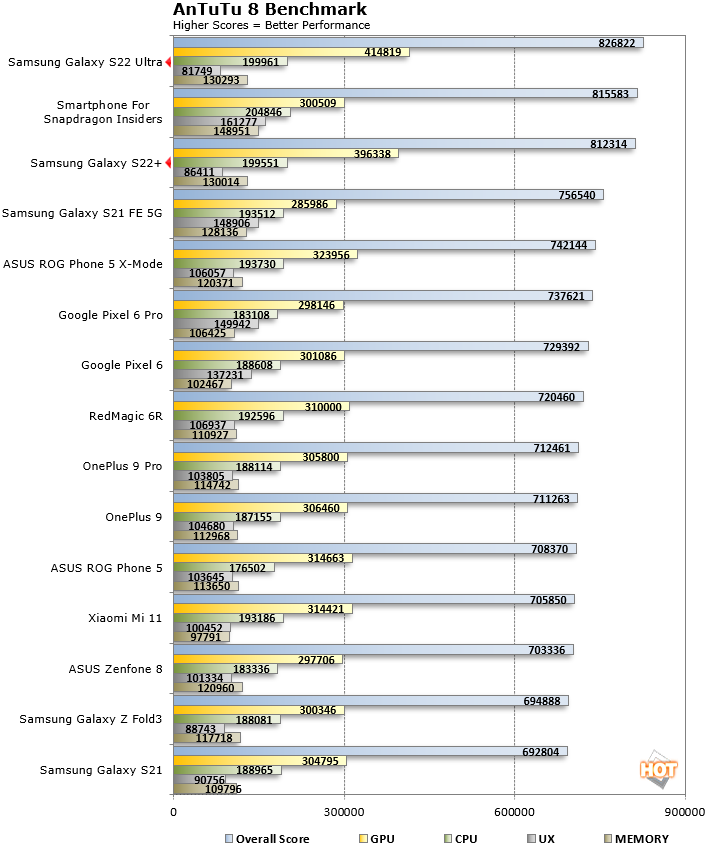 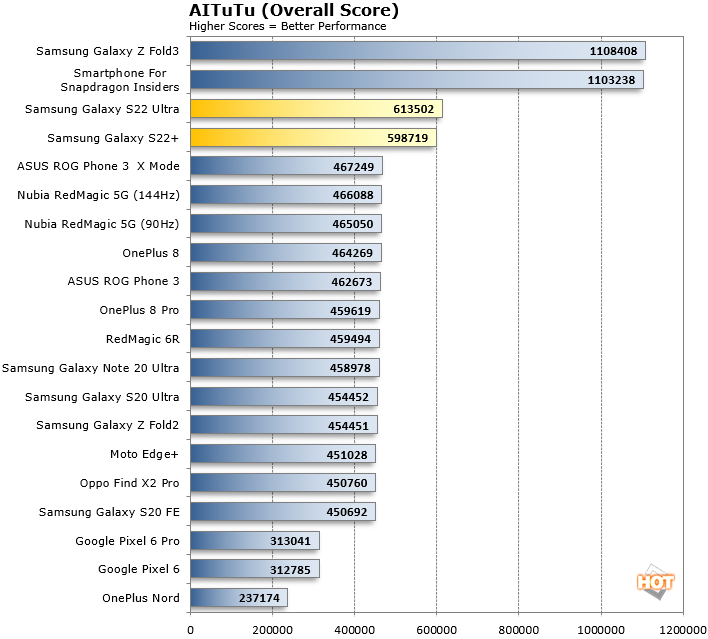 According to AnTuTu, The Galaxy S22 Ultra and S22+ offer a substantial increase in performance vs. previous generation Android handsets, with the S22 Ultra even beating Qualcomm's Smartphone For Snapdragon Insiders in overall score.

However, in AITuTu, which is specifically an image recognition and classification benchmark for AI and machine learning workloads, we see a different picture. Here there are big gains for the Snapdragon 8 Gen 1 powered Galaxy S22 Series devices, but they don't catch two scores in our database from Snapdragon 888-powered devices. We've found this to be the case where some phones might not have the latest neural network models installed in the phones firmware packages, so an update here from Samsung could easily change this picture. 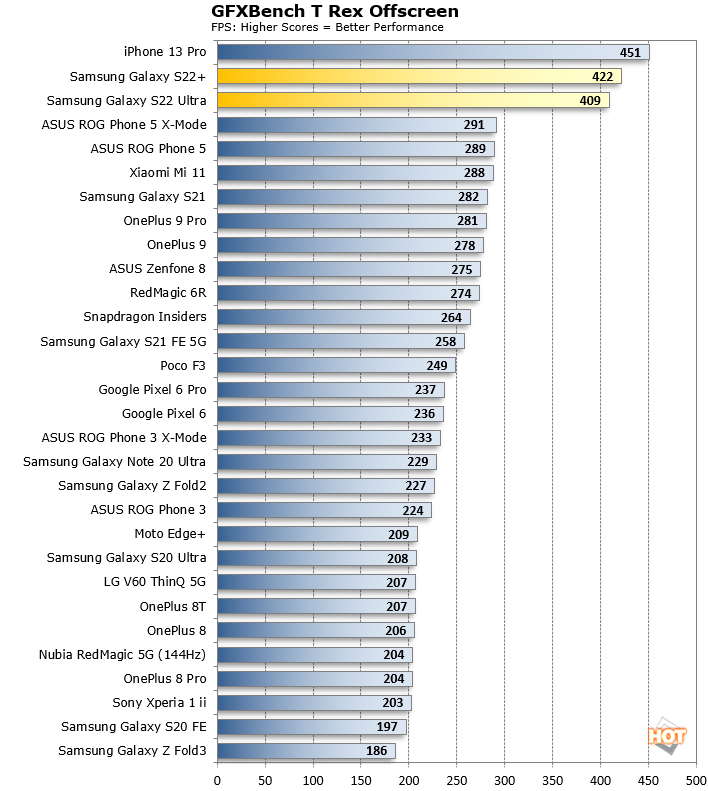 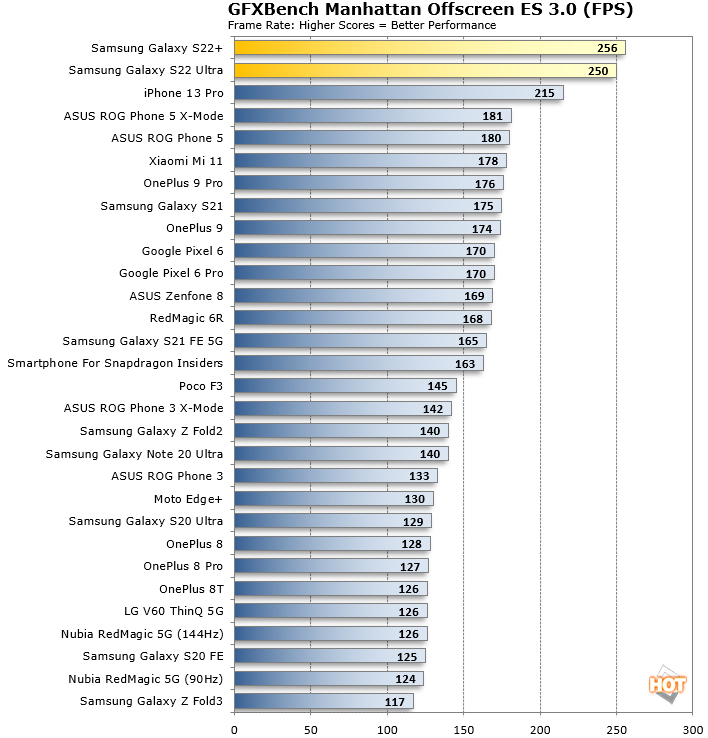 Now we're seeing the kind of performance improvement we expected from the Snapdragon 8 Gen 1-equipped Galaxy S22 series. These new phones clearly beat Snapdragon 888-powered devices, and come out way ahead of ASUS' ROG Phone 5 in X-Mode. They even best Apple's latest iPhone 13 Pro in the more modern Manhattan test, which is a major coup. 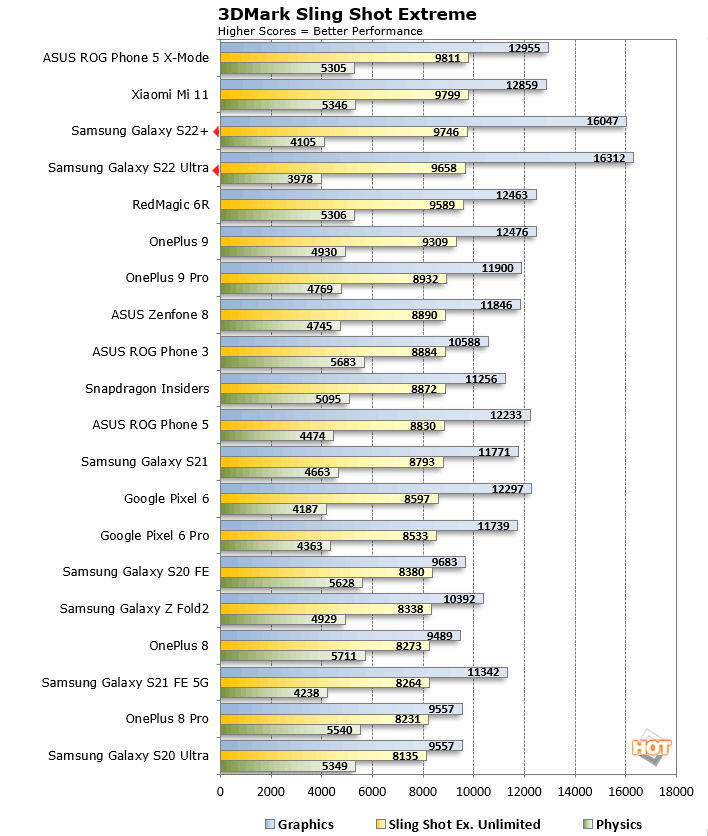 Here we see no significant improvement to the overall score over Snapdragon 888-equipped flagships. Still, the Galaxy S22 Ultra and S22+ perform extremely well in this test, beating every other Android flagship in the graphics score by a wide margin. 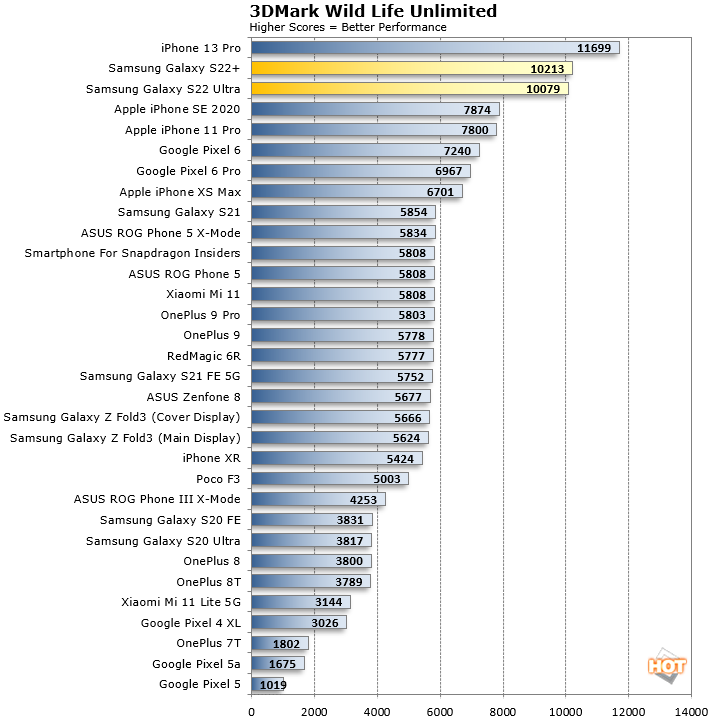 3DMark Wild Life is a significantly more taxing graphics benchmark that employs cutting-edge mobile game engine technologies to deliver impressive visuals -- as you can see in the screen shot above. Here the Snapdragon 8 Gen 1-powered Galaxy S22 series delivers a massive improvement in performance versus some of the fastest Snapdragon 888-equipped devices, and even comes within striking distance of the iPhone 13 Pro, which is running on its Metal API in this test. 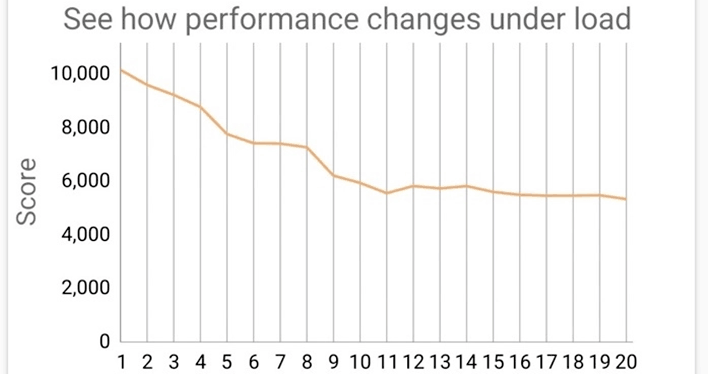 Unfortunately, the Galaxy S22+ and S22 Ultra do exhibit similar throttling to what we experienced with the Galaxy S21, managing a stability score of just 49.8% and 52.5%, respectively in the Wild Life Stress test. This isn't too surprising, as most Android phones we test, as well as iPhones throttle pretty hard under load. Gaming phones like the ASUS ROG series and a few others are notable exceptions here with respect to throttling, however.

Rounding things up, the S22 Ultra and S22+ feature superior haptics thanks to a quality linear vibration motor, plus an ultrasonic in-display fingerprint sensor that’s quick and reliable. Face unlock is also available, and works well. Both handsets support 45W wired charging (USB PD 3.0) and 15W Qi wireless charging, plus 4.5W reverse wireless charging, but the S22 tops out at 25W. Like last year, there’s no charger supplied in the box. 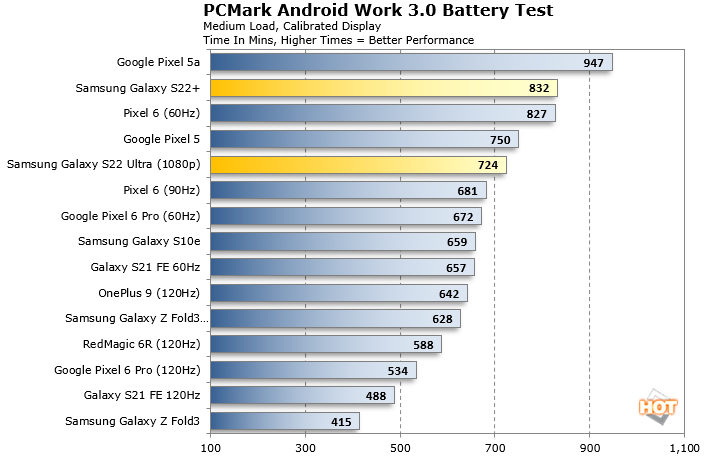 
Next up: the software, pricing, and the review verdict...
PREV PAGE NEXT PAGE