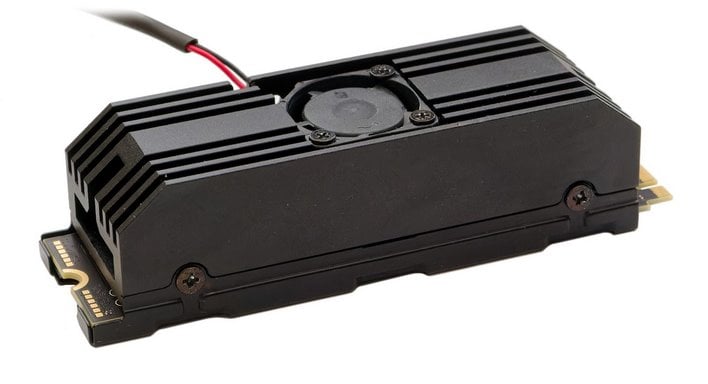 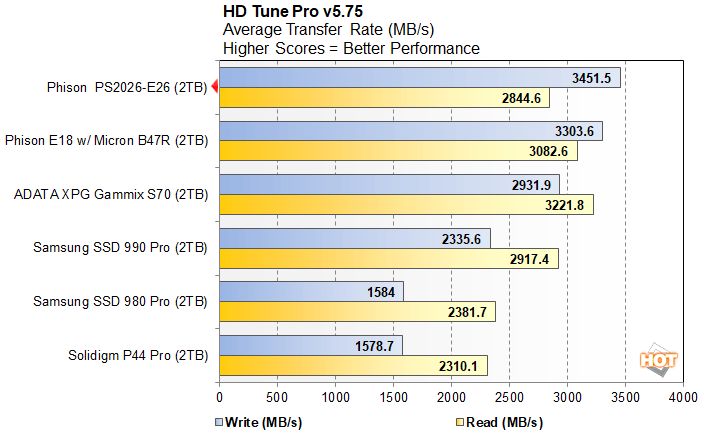 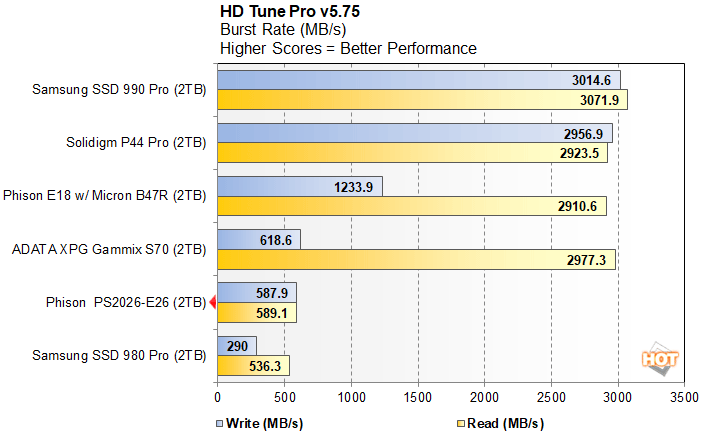 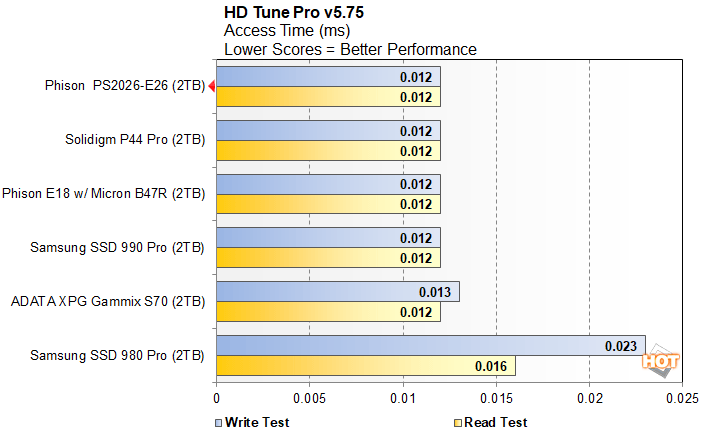 As expected, the new Phison drive and its fresh E26 controller offer very impressive average transfer rates in HD Tune, although the read performance actually lags behind some of the other drives in our tests. That's despite the PS2026-E26 having the lowest access time we've measured on this platform; we suspect all of these drives are hitting a sort of system bottleneck of sorts in that metric.
Surprisingly, the PS2026-E26 actually puts in a relatively poor result in HD Tune Pro's burst transfer rate test. We're loathe to speculate on the reasons for this, but if we were to hazard a guess, we'd assume that the IO+ Technology firmware is so heavily tuned for sustained transfers that the burst rate suffers slightly. 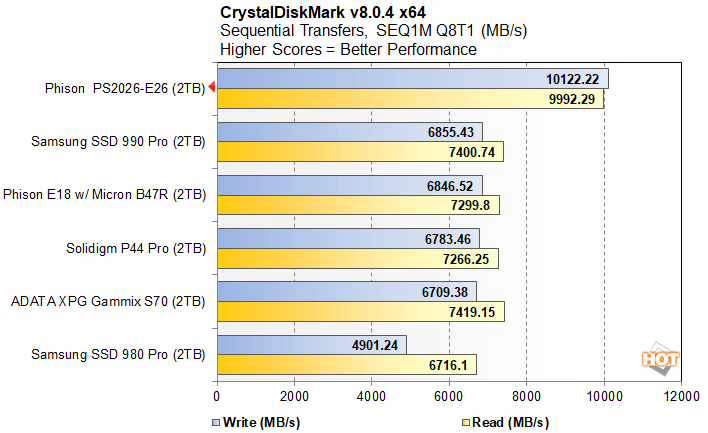 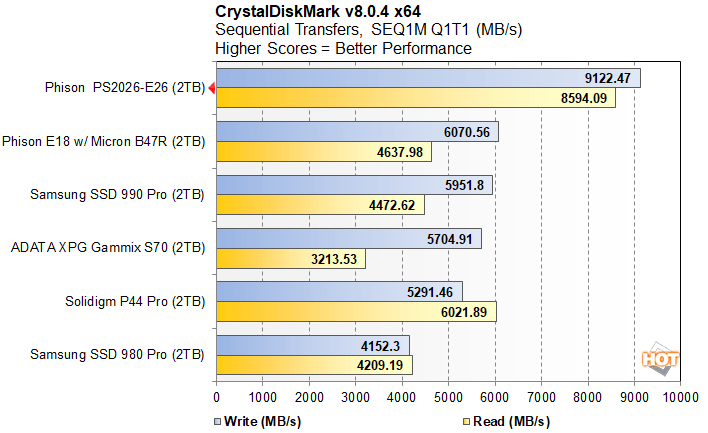 We are once again unsurprised that the Phison drive and its white-hot PCIe 5.0 interface absolutely destroy all comers in these sequential benchmarks. We feel like the Q8T1 results represent what is most likely the absolute maximum real-world performance of this drive, at least on the AMD platform we tested it with. Performance on Intel's 13th Gen platform is actually somewhat higher, but all of our reference data was captured on a socket AM5 system. 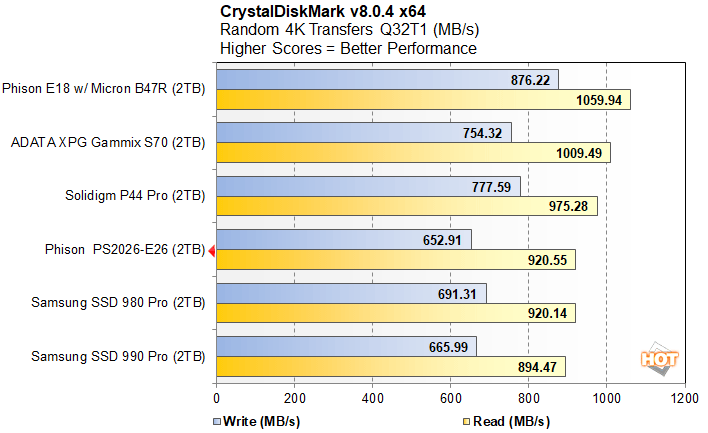 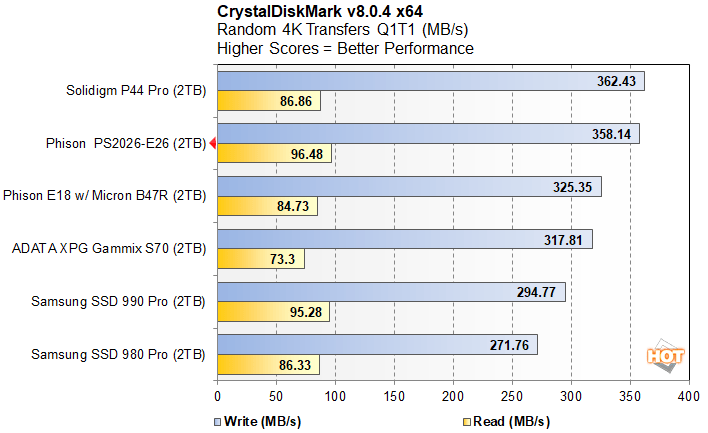 The random access results in CrystalDiskMark aren't as stunning at a glance as the sequential results, but note that this drive is the fastest of the bunch in single-threaded random 4K reads with a queue depth of 1, even beating out the Samsung SSD 990 Pro. The Q32T1 results are good but unremarkable among the other drives; as we've noted already, this SSD is very clearly optimized for a desktop workload that is very unlikely to see such extreme I/O queue depths.

We honestly expected the new drive to best all comers in this test, which is largely a benchmark of how fast your SSD can chuck data into RAM. The Solidigm drive has exceptionally low access latency as well as a much better burst transfer rate than the Phison drive, so that's likely what allowed it to creep ahead. The difference in the two drives is a whopping 110 milliseconds, so it's essentially margin-of-error anyway; both are ludicrously fast.

UL recently added a gaming-centric storage benchmark to 3DMark, that leverages trace-based tests of actual PC games and gaming-related activities (like streaming with OBS) to measure real-world gaming performance in a variety of scenarios. The tests include things like loading Battlefield V, Call of Duty: Black Ops 4, and Overwatch from the initial launch to the main menu, recording a 1080p gameplay video at 60 FPS with OBS while playing Overwatch, installing The Outer Worlds and saving game progress, then finally, copying the Steam folder for Counter-Strike: Global Offensive from one drive to another. 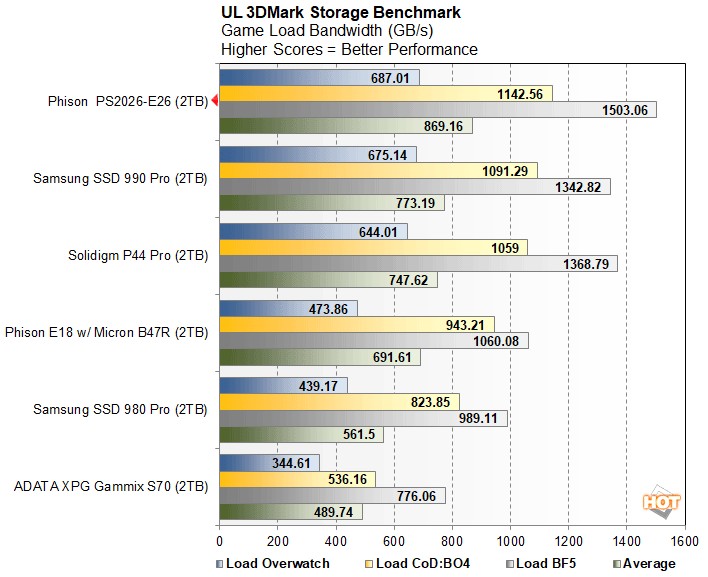 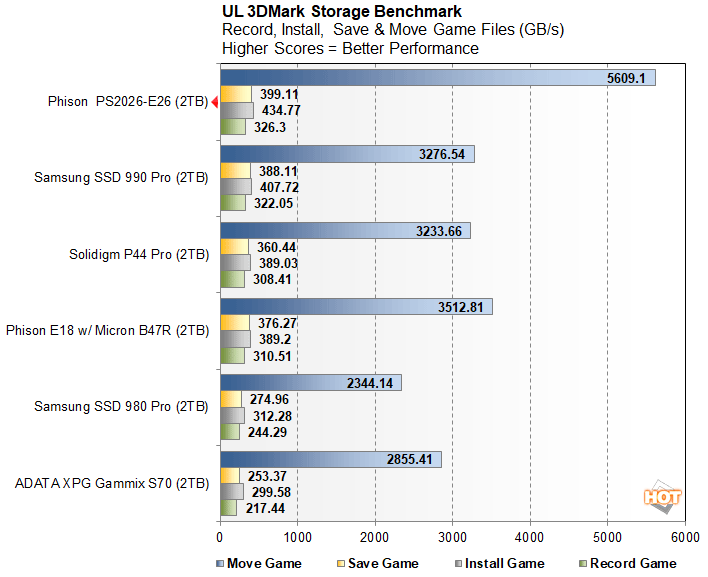 The Battlefield V test and the "Move Game" test both strongly favor the new PCIe 5.0 SSD, but it comes out at least slightly ahead of the other drives in just about every test in this benchmark. 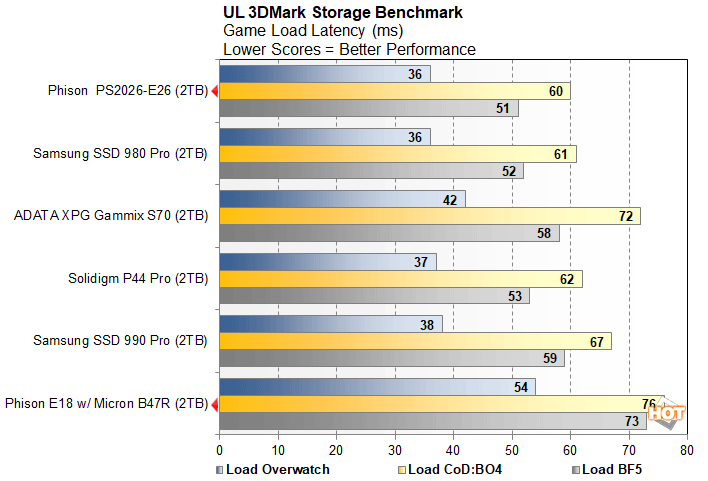 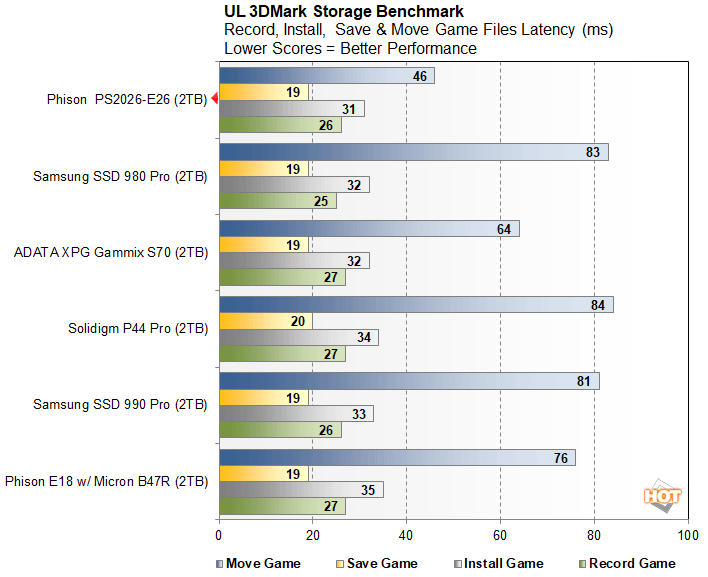 That pattern continues in these sets of tests that measure I/O latency instead of throughput. As we discussed before, higher throughput can also mean lower latency when it allows you to keep things flowing instead of filling up buffers, and that could well be why the Phison PS2060-E26 reference platform comes out on top or ties the fastest SSDs in virtually every test.

Naturally, given its performance in the individual benchmarks, the overall score for the new drive is a solid win over the other SSDs. Going all the way back to 3DMark '99, the storied benchmark utility has always favored the latest hardware, and that holds true for the new storage benchmark, too.

In the trace-based PCMark tests, which are comprised of a broad mix of consumer workloads, the E26-based drive takes the top spot in every metric, and by a conclusive margin, too. Aside from the Final Fantasy XIV test, these are probably the most "real-world" tests that we perform, and Phison's new SSD reference platform performs with panache, dispatching even the mighty Samsung SSD 990 Pro.

Overall, in the synthetic benchmarks the Phison drive blew away the competition in sequential tests but didn't always lead in random accesses. Don't get it twisted, though: we're testing it against some of the fastest PCIe 4.0 SSDs around, and even at this early stage it keeps up with the pack.
Where we were much more impressed was with the drive's practical and real-world performance. It blew away the competition in both the 3DMark storage test as well as the PCMark productivity tests. That's surely thanks in part to its PCIe 5.0 interface, but there's no way that's the whole story here. Phison's hard work with the firmware likely plays a role, and the large 4GB LPDDR4 cache surely helps as well. 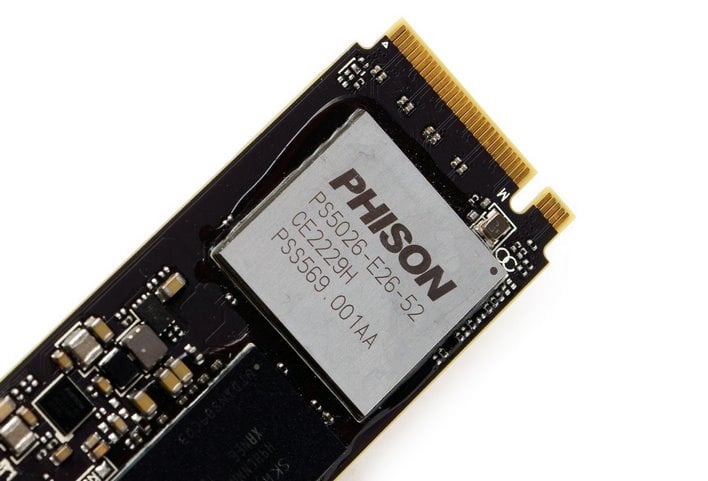 
Despite DirectStorage being "released" on Windows 11, there's currently no commercial software at all beyond a few test applications that actually uses it. In the synthetic bulk workload DirectStorage test we experimented with, we're given a glimpse of that the drive is capable of.

This SSD is specifically tuned for DirectStorage-like workloads, so it would have been interesting to see how it holds up against other SSDs that haven't received such tuning when actual games using the technology arrive. We'll just have to wait until actual DirectStorage-enabled games hit the market, the first of which should be Square-Enix's Forspoken, releasing on January 24th.

This reference platform isn't a retail SSD. You won't be able to buy this drive in this exact form, because Phison, unlike, say, NVIDIA, doesn't sell its own branded SSDs. Instead, you'll be buying drives with these controllers from the likes of Kingston, Seagate, Sabrent, ADATA, and Aorus, among many others. Phison doesn't speak for its partners, but the company did tell us that this hardware has been released to manufacturers and that "production has started," so we expect these SSDs will be showing up sooner than later.