AMD and Intel are both readying next-generation platforms, Zen 4 (Ryzen 7000 series) and Raptor Lake (13th Gen Core), respectively. In anticipation of what those platforms will bring, Adata is showing off a handful of products that users will be able to pair with Zen 4 and Raptor Lake, including a couple of high-speed DDR5 memory lines and a blazing-fast PCIe 5.0 solid state drive.
This isn't the first time Adata has teased these products. Back in December (just ahead of the Consumer Electronics Show in January), Adata offered a sneak peek at its Project Nighthawk and Project Blackbird SSD models, showcasing both with their heatsinks removed. It also shared some speed claims.
Fast forward to now and Adata has put together a product poster showcasing renders of one of those drives in presumably finished form, along with its Caster RGB and Slayer RGB DDR5 memory modules.
The poster doesn't introduce a ton of new information, though we do get a glimpse of the heatsink on the SSD. According to ITHome, it employs Adata's exclusively designed fin cooling system. It appears a bit on the chunky side (from what we can see in the render), and it's not clear if it will fit inside the PlayStation 5. It's a waste to inject a PCIe 5.0 SSD in the PS5 anyway. 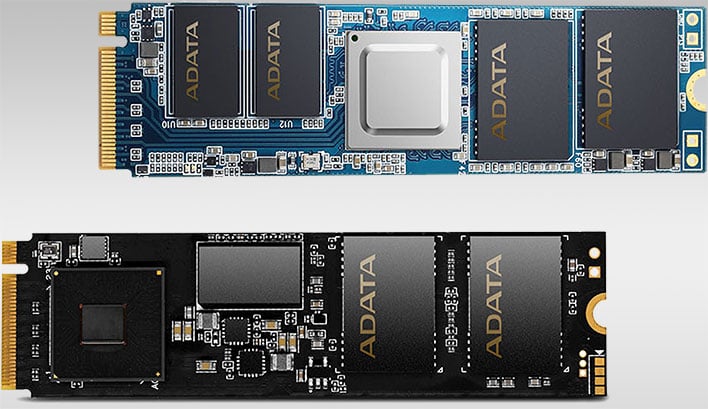 It was previously revealed that the Nighthawk drive will leverage Silicon Motion's SM2508 controller while the Blackbird drive will take flight with InnoGrit's IG5666 controller. Both are rated to deliver up to 14GB/s of sequential write performance. For writes, Adata previously said the Nighthawk is rated to hit 14GB/s, while the Blackbird drive will go to 10GB/s. Adata will offer the drives in capacities up to 8TB.

The theoretical maximum throughput for a PCIe 5 SSD with an NVMe interface is around 16GB/s, which is twice the bandwidth of PCIe 4.0. Real-world benefits will go largely unnoticed for the typical user. Game developers are only now starting to optimize code for faster SSDs thanks to the storage scheme on the PS5 and Xbox Series X|S, and Microsoft's DirectStorage API in Windows. At least in the early going, the wider bandwidth that PCIe 5.0 affords will really only benefit large file transfers.

As for the memory modules, it's said the XPG Slayer RGB DDR5 will be offered at speeds of up to 7,000MT/s. For reference, the fastest DDR5 memory that you can actually buy right now is a 32GB G.Skill Trident Z5 RGB DDR5-6600 kit for $437.99. So Adata's upcoming kits will at least among the fastest when they arrive, presumably later this year.