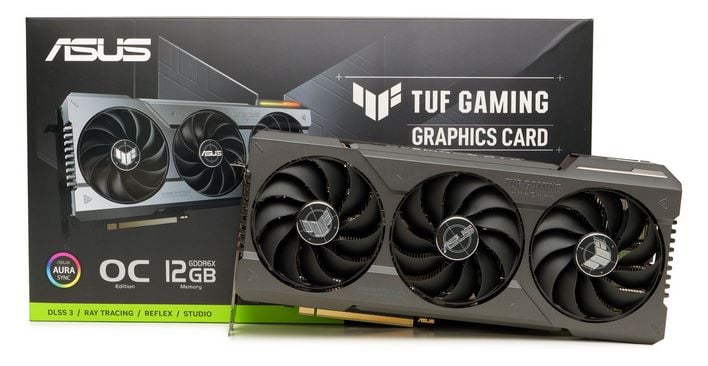 A new member of the initial GeForce RTX 40 family officially launches today, known as NVIDIA's GeForce RTX 4070 Ti. If you’ve been on top of all of NVIDIA’s announcements, you’ll probably be aware that this card was originally announced as the GeForce RTX 4080 12GB, but the company quickly “unlaunched” it due in large part to community feedback, only to re-tool the branding.

We’re not going to rehash the unlaunch saga again here, because today is all about performance. NVIDIA already revealed pricing during its special CES address, with pics and specs for a myriad of partner boards have already hit the web. It’s important to note that there will be no GeForce RTX 4070 Ti Founders Edition, as NVIDIA is leaving the designs up to their board partners this time around, and some of them have opted for maximum bling.

We have the ASUS TUF GeForce RTX 4070 Ti OC Edition on hand for testing and evaluation. ASUS actually has four RTX 4070 Ti card coming down the pipe; the model we’ll be showing you here is second up the ladder in ASUS’ lineup. The company has a lower-clocked model arriving at NVIDIA’s suggested MSRP and two pricier models in the ROG STRIX line-up with higher-clocks and a few additional features. 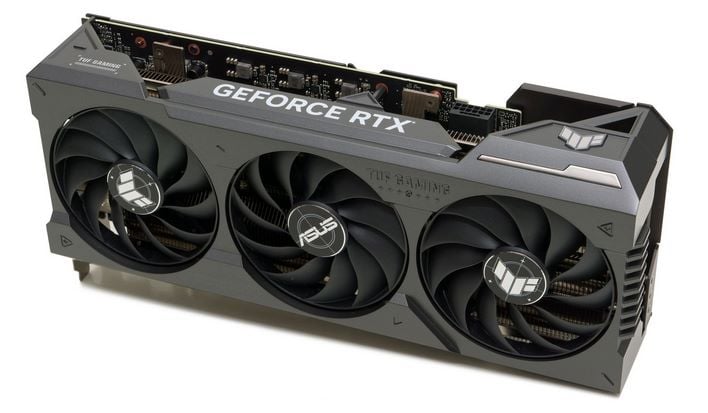 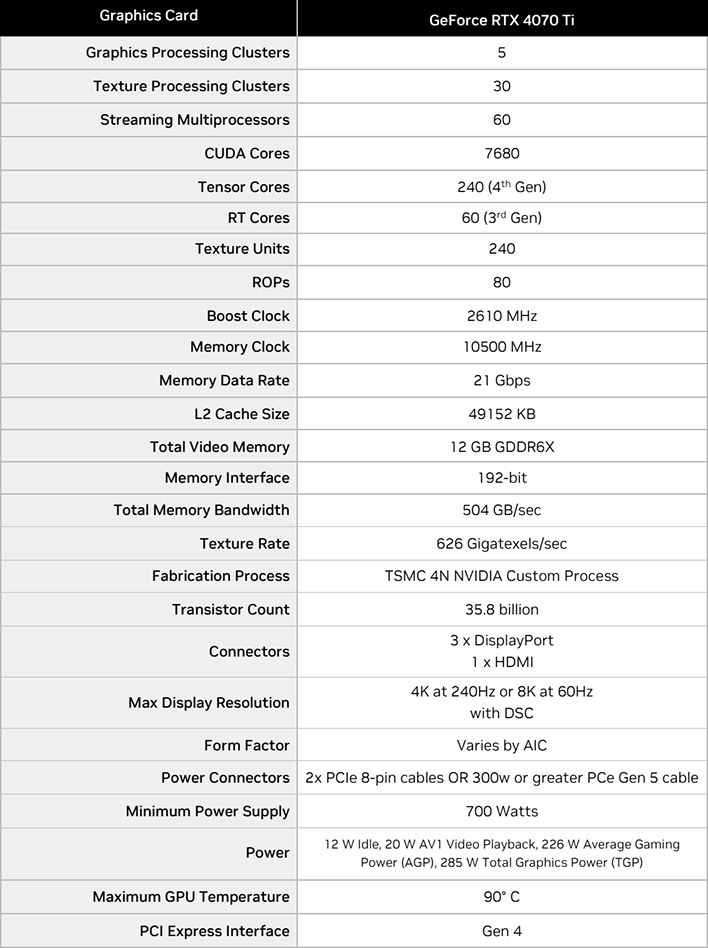 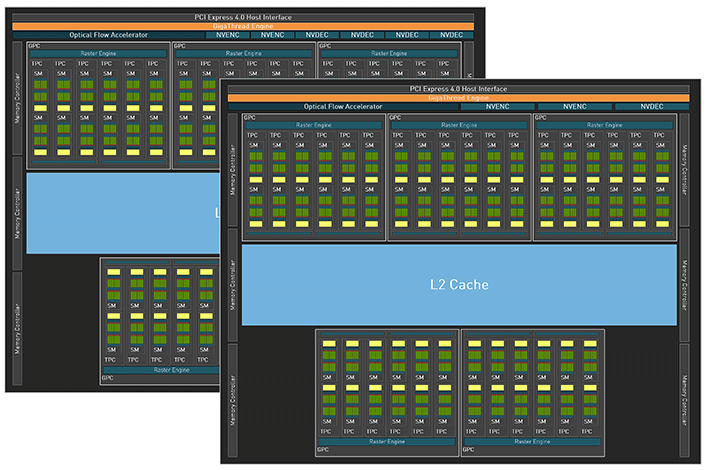 In terms of feature support, the AD104 is identical to the larger AD102 and AD103. All of the GPUs offer the entirety of features inherent to the Ada Lovelace architecture, like DLSS 3, in addition to other NVIDIA technologies like NVIDIA Reflex latency reduction, NVIDIA Broadcast, Ansel, G-SYNC, Omniverse, optional Studio drivers, and GeForce Experience, to name just a few. For a more detailed explanation of Ada Lovelace, we suggest reading the linked article and checking out our launch coverage of the GeForce RTX 4090 while you’re here.

Versus its bigger brothers, the AD104 on the RTX 4070 Ti is scaled down in a few key ways.

The AD104 on the GeForce RTX 4070 Ti is also scaled down slightly from the full configuration of the chip, but not in terms of cores. Half of the AD104's NVENC / NVDEC blocks are disabled (visible at the top edge of the block diagram above).

Versus the previous-gen GA104-based GeForce RTX 3070 Ti, the AD104 powering the GeForce RTX 4070 Ti also appears to be slightly scaled back in a couple of ways. The newer AD104 has more cores and operates and higher-clocks, but it has fewer ROPs and a narrower memory interface (192-bit vs. 256-bit). These apparently deficiencies will be mitigated, however, due to architectural enhancements in the more advanced Ada Lovelace architecture, much larger caches, and its higher-clocks.

Like all of the air-cooled GeForce RTX 40 series cards we’ve seen up to this point, the ASUS TUF GeForce RTX 4070 Ti OC Edition is a rather beefy graphics card.

The ASUS TUF GeForce RTX 4070 Ti OC Edition is over a foot long, over 5 inches higher, and 2.7 slots wide. The cooler features triple axial fan, situated atop an array of heatsinks, linked together via heat-pipes. As you’ll see in some of the images below, though the heatsinks are ultimately wider than the entire PCB, there are some gaps in the assembly and they don’t completely cover the front side of the board.

In terms of specifications, ASUS sticks to the 12GB complement of GDDR6X RAM clocked at an effective data rate of 10.5Gbps set forth by NVIDIA’s reference specs. As the “OC Edition” in the card’s branding reveals, however, this ASUS TUF card has goosed up boost clocks. NVIDIA’s specs call for a 2,610MHz GPU boost clock, but we routinely saw this card boosting over 2,800MHz in its stock configuration. And, of course, higher-clocks are possible with overclocking. 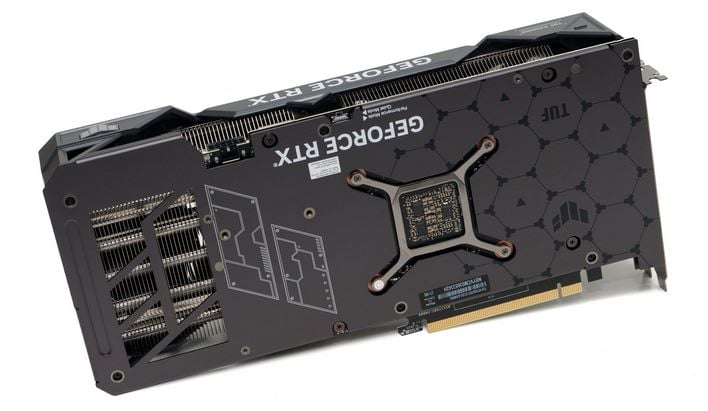 There is a dual-BIOS switch on the ASUS TUF GeForce RTX 4070 Ti OC Edition, which gives users the ability to switch between normal / performance mode and a quiet fan mode. This card is effectively silent at idle, however, because its fans spin down completely when the GPU isn’t being stressed. And under full load, even when overclocked, GPU temps only fell in the 70°C range, and fans speeds only ramped up to about 40 – 43%, which didn’t produce much noise at all.

There is a metal heat-plate on the backside of the card, with cut-outs to allow for pass-through cooling, along with an array of graphics and branding. The front fan shroud has numerous angles and cut-outs as well. The card also features RGB lighting, which can be managed with ASUS GPU Tweak III utility. 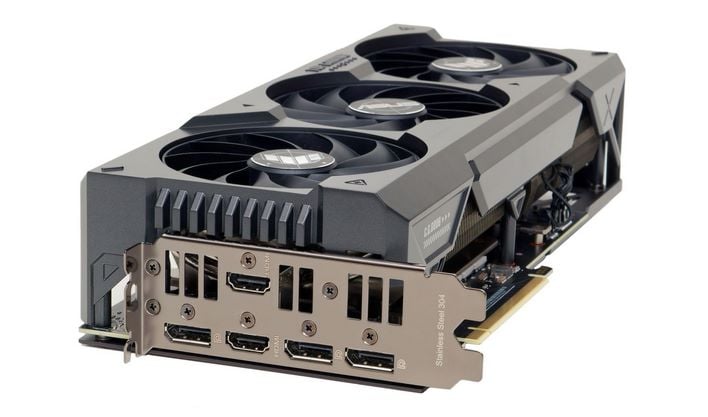 There’s no mistaking the ASUS TUF GeForce RTX 4070 Ti OC Edition for anything but a gaming GPU. And now it’s time to find out how it performs...
NEXT PAGE