Samsung is getting ready to launch a premium Chromebook. Called the Galaxy Chromebook, it wields a 13.3-inch 4K (3840x2160) AMOLED touchscreen display powered by an 10th generation Intel 'Comet Lake-U' processor, and commands $999. It will be available to purchase starting April 6, 2020, for those who are looking for a high-end Chromebook.
That is a steep price to pay for a 2-in-1 device that runs Chrome OS instead of Windows 10. To be fair, though, it is also one of the lesser expensive laptops—regardless of the operating system—to feature an OLED screen. And in this case, it is a touchcreen panel with a 4K resolution to boot, packed into a frame that measures a scan 9.9mm and weights just under 2.3 pounds. 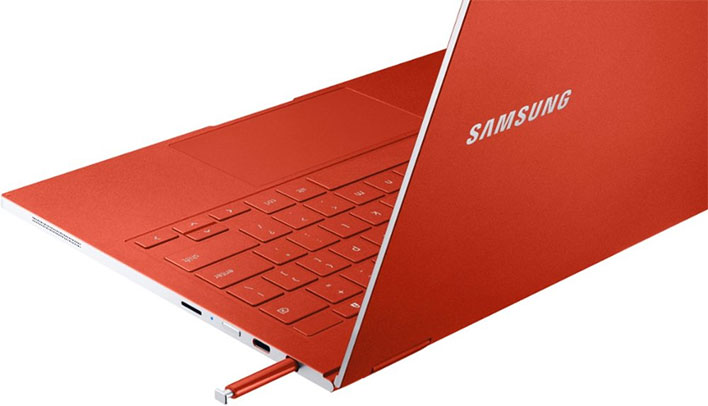 Here is a rundown of the pertinent specifications...
The CPU is based on Intel's Comet Lake architecture. It sports 4 cores and 8 threads with a 1.6GHz base clock and 4.2GHz boost clock, along with 6MB of L3 cache. On the graphics side, the Intel UHD Graphics sport 24 execution units and buzzes along at 300MHz (base) to 1.1GHz (boost). The default TPD is 15W, though it is configurable from 10W to 25W. 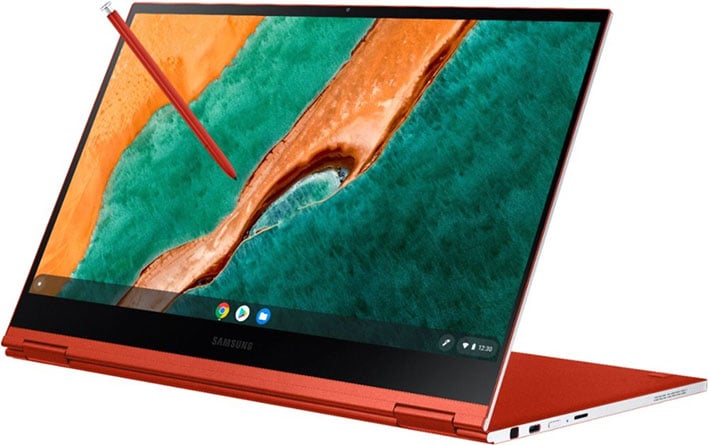 Back at the Consumer Electronics Show in January, Samsung suggested it would also offer the Galaxy Chromebook with 16GB of RAM and a 1TB SSD at some point. It is not clear when that configuration will arrive or how much it will cost.
As for this configuration, it is definitely on the higher-end in the Chromebook space. In addition to the specifications listed above, there is an 8-megapixel camera embedded in the keyboard to use as a rear camera (when flipping the display), a 1-megapixel webcam, a fingerprint sensor, dual speakers, and a backlit keyboard.
There is already a product listing at Best Buy. Users will be able to purchase the Galaxy Chromebook in Fiesta Red or Mercury Gray.