3DMark is a synthetic GPU benchmark for assessing graphics (GPU) and physics (CPU) performance. 3DMark supports both DX11 and DX12, depending on the particular test being run, which makes it handy for testing GPUs of various performance levels. We used the FireStrike test's Extreme preset and the standard TimeSpy benchmark to push the Maingear Turbo. FireStrike's Extreme preset runs the test at 2560x1440. We're reporting overall scores and physics subtest scores to see how the Turbo performs. 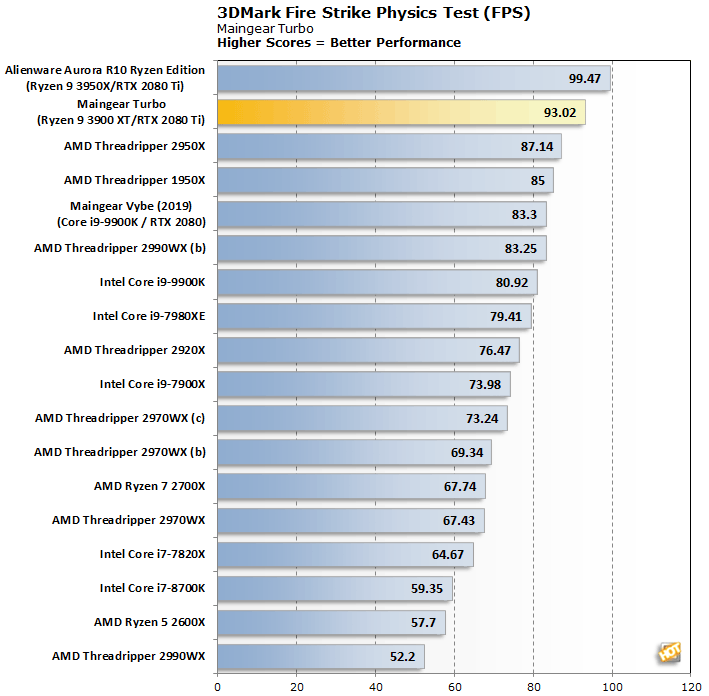 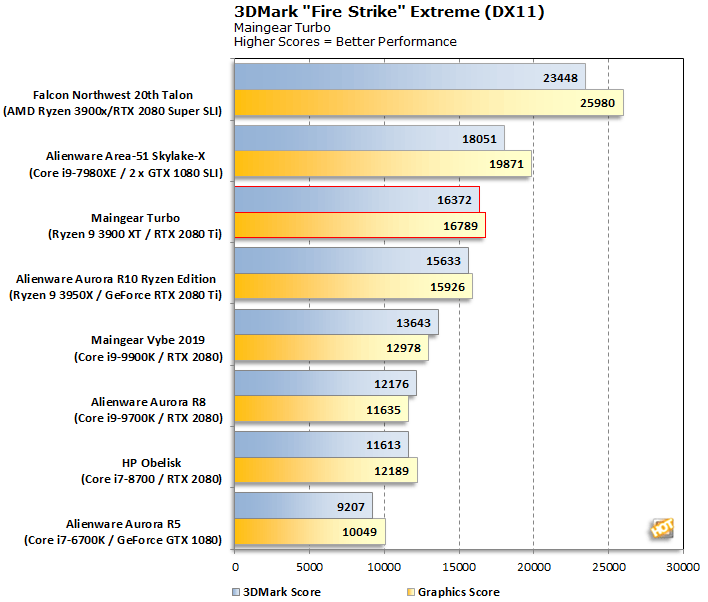 If we shift focus away from the physics test and onto the GPU, the scales tip in favor of the Maingear Turbo, versus the Alienware system. The Turbo's liquid-cooled GeForce RTX 2080 Ti manages to outpace the Aurora's by a few percentage points, which actually makes the Maingear Turbo the leader of the single-GPU configurations here. 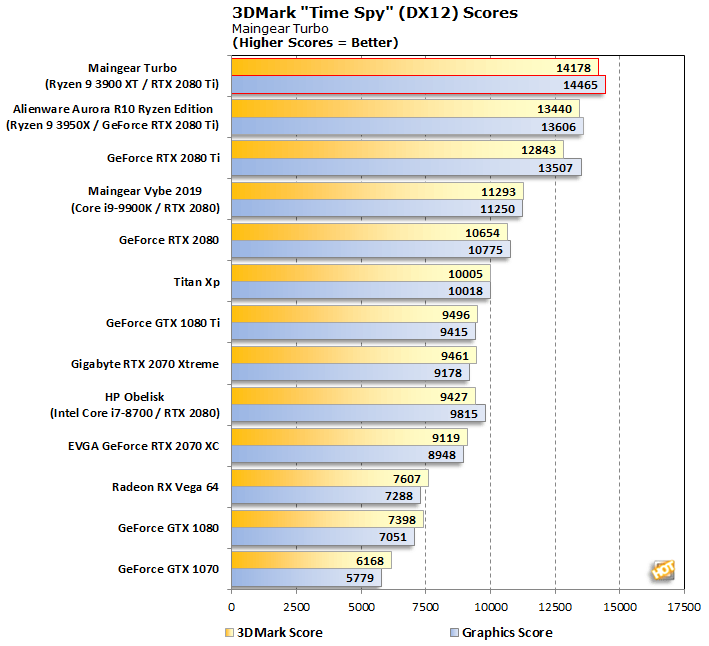 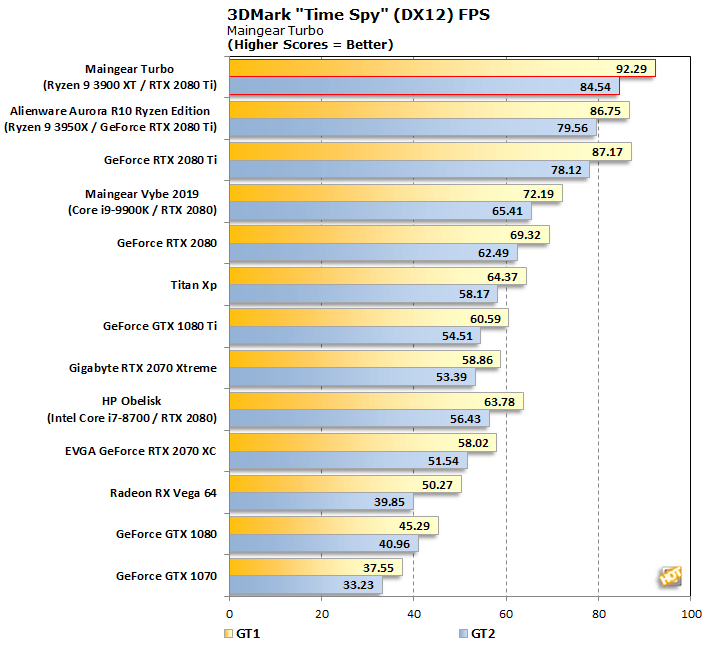 That liquid-cooled GeForce RTX 2080 Ti flexes its muscles once again and pushes the Maingear Turbo to the top of the charts in the 3DMark Time Spy benchmark.

Now it's time to move on to our gaming tests. Playing the latest AAA games at high resolutions and detail settings is the reason you'd look to buy this desktop in the first place.


Middle Earth: Shadow of War is a fun and and beautiful title set in Tolkien's Lord of the Rings universe. To test the game's performance relative to other systems, we set the resolution to 2560x1440 and turned the visuals up to the High preset. 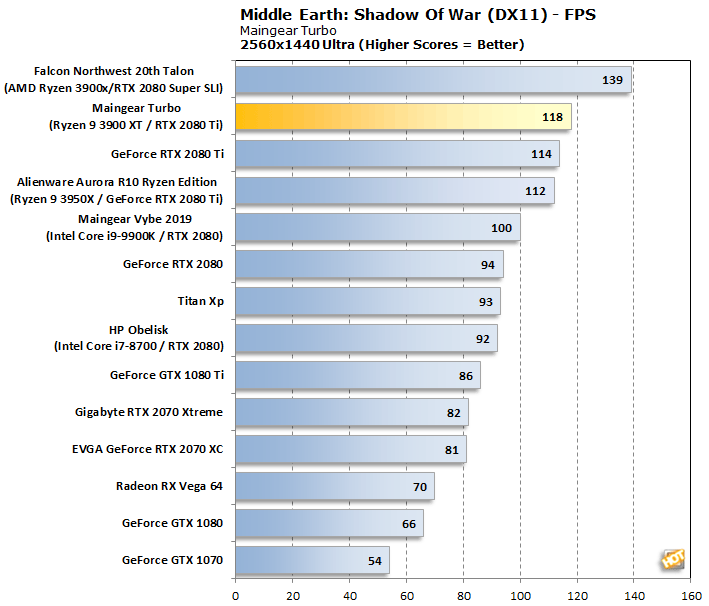 With a GeForce RTX 2080 Ti unconstrained by the limitations of its stock air-cooler, the Maingear Turbo we tested offers excellent graphics performance. In Shadow Of War, we see the Turbo leading the single-GPU configurations yet again. 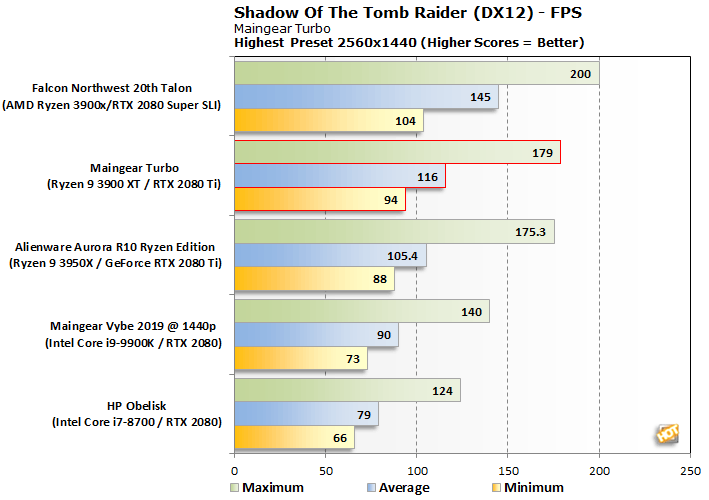 Shadow Of The Tomb Raider tells essentially the same story as Shadow Of War. The liquid-cooling a GeForce RTX 2080 Ti and backing it up with one of AMD's premiere desktop processors is a perfect recipe for high-performance gaming.


Gears 5 is the other fall blockbuster we had a chance to dig deeply into, and this game proves you don't need ray tracing effects to make a gorgeous game. As with Control, Gears 5 is super-new, so our charts are a little sparse. We tested at 1440p and 2160p again with the Ultra and High presets. 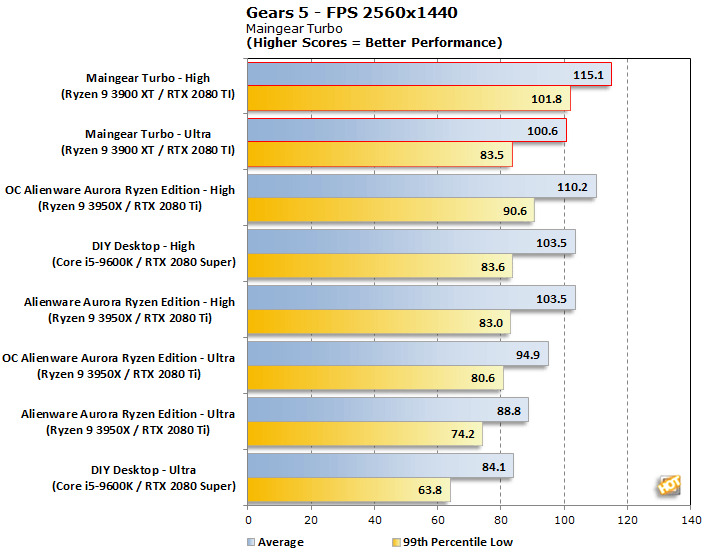 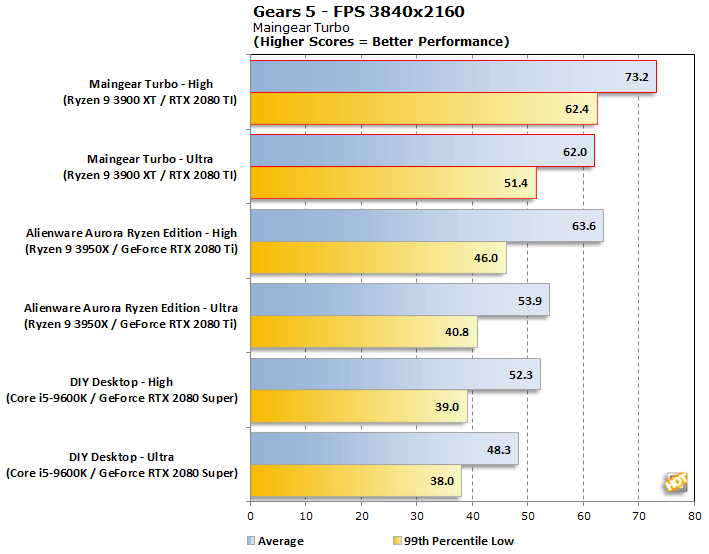 There are two sets of numbers here for all of the configurations, one set with the game configured for 'High' image quality settings and another with the game set to its 'Ultra' mode. In Gears 5, we see the Maingear Turbo performing exceptionally well relative to the other GeForce RTX 2080 Ti powered system, though the deltas are most likely due to a combination of better GPU cooling in the Maingear Turbo, along with perhaps newer drivers.
PREV PAGE NEXT PAGE