Before we get to the performance of the Maingear Turbo configuration we're testing here, let's look at the capabilities of its Apex Liquid Cooling solution, as well as power consumption. After all, there's a lot of acrylic and hardline tubing going on, and it will also be interesting to see how much the system might tax that tiny but powerful 750 Watt PSU.

To measure idle power consumption, we let the Mg Turbo boot to the Windows desktop and settle for a few minutes. Once the value on the Kill-A-Watt stabilized, we recorded that value as the idle consumption. The loaded figure represents perhaps a slightly unrealistic scenario in which the Turbo was tasked with running both Prime95's Blend test and a 2560x1440 Furmark stress test simultaneously. This desktop PC was plugged directly into our Kill-A-Watt for all measurements, so only its power draw is being measured here. 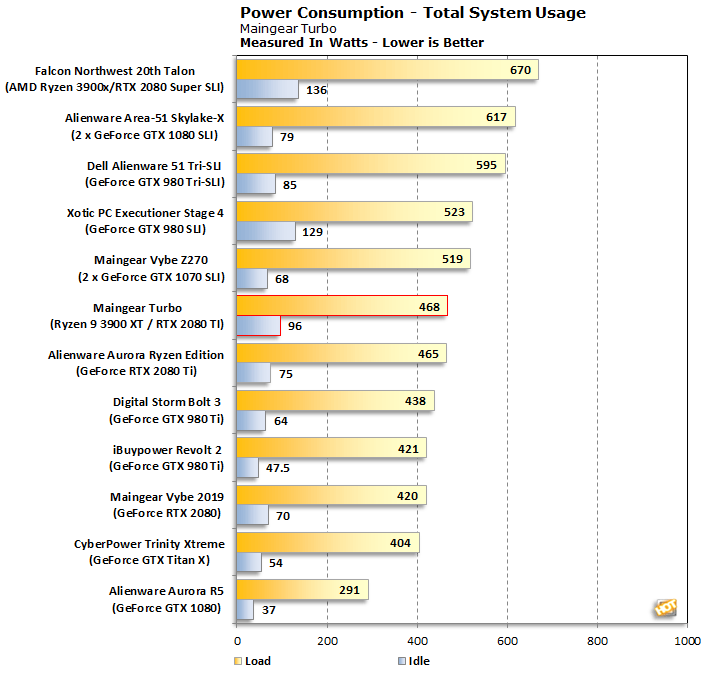 Interestingly, the Maingear Turbo pulled a fair amount of juice both at idle and full load, and it even slightly surpassed our Alienware Aurora Ryzen Edition numbers at idle, which is based on a Ryzen 9 3950X 16-core CPU. One thing is certain, looks can be deceiving and there's nothing low power about our pint-sized Turbo configuration. It's fairly power-efficient for what it offers in terms of performance (as you'll see on the pages ahead) but that's speaking relative to its middle of the pack result here among very high performance gaming desktops.

The above power consumption sanity check was pulled from the system as it was configured and stock from the factory. However, we couldn't resist putting a beating on this petite but potent little fella. Here are our results from a little Ryzen Master-driven CPU overclocking and also what a simultaneous full, 100% load on both the CPU and GPU looks like from a thermal perspective.


The first screen shot you see here is what Maingear's Turbo looks like, at its default configuration from the factory with its AMD Ryzen 9 3900 XT CPU under full load with Prime95, as well as its NVIDIA GeForce RTX 2080 Ti GPU pegged by Furmark. As you'll see the Turbo's Apex Liquid Cooling system is handling this flat-out load with ease and keeping the Ryzen 9 3900XT at a tepid 78ºC or so.

Then we wanted to see what we could do with just the 12-core Ryzen 9 3900 XT, in terms of overclocking, so we hit Ryzen Master Creator Mode and set some higher all-core clock speeds. We didn't really need extra voltage per se (multiple runs at stock yielded similar results), but at a small bump to 1.4v we topped out at 4.35GHz on the CPU. Pushing to 4.4GHz or higher resulted in system resets, but the Turbo seemed perfectly stable with several consecutive Cinebench 20 runs at 4.35GHz and a tame 79.54ºC CPU temp. Frankly, we'd just leave a Turbo configuration like this at stock speeds but if you want to push things a bit, it's certainly available to you.

In addition, Maingear's custom Apex Liquid Cooling system on board offers more than enough thermal capacity to handle even the heaviest of workloads on our 12-core Ryzen chip, and likely just as easily with its top-end available Ryzen 9 3950X 16-core configuration as well. But you're probably wondering how this elaborate cooling system sounds under heavy load? Let's take a look...

This was an area of performance with the Maingear Turbo that frankly caught us by surprise. We fully expected this foot tall by barely a foot deep-sized machine to put out a bit of a racket when stressed. However, as you can see above, even with both its CPU and GPU pegged 100 percent (factory stock speeds), it barely crested 50db on our sound meter. We did see one or two peaks at 52, but on average, only inches away from the system, 50db was generally what we measured. Now, relatively speaking, the ambient noise floor for the room we tested in is about 32db, so the Turbo lifted that to be sure and it was audible. However, at 50 db, acoustics are still plenty easy on the ears. Once you get up around 55db things start to get annoying, not so here with the Turbo. This is not only a powerful, feisty little machine, but it's also surprisingly well-behaved acoustically.
PREV PAGE NEXT PAGE