XPS 13 Plus - Dell's Beautiful, Breakout Laptop Is In Need Of Some Refinement 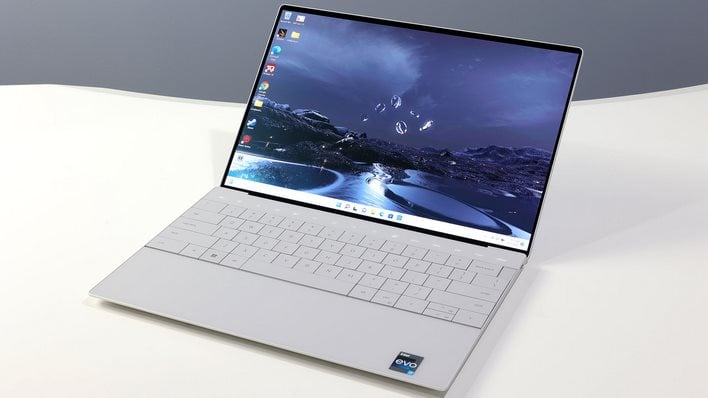 Dell's XPS 13 line of ultralight laptops has been wildly popular for several generations now, so it's no wonder its physical design hasn't undergone many major changes along the way. However, the new Dell XPS 13 Plus (model 9320) is a very different little beastie, from its oversized key caps and platinum glass palm rest in its typing deck, to what Dell is calling its "seamless glass, haptic force pad" and its capacitive touch function key row. Without question, the XPS 13 Plus' force pad haptics and seamless touchpad (or lack there of) are a fairly radical departure from most traditional laptop designs. Though cutting to the quick on that topic, we don't think this design change is something that will require much end user learning curve, as it's generally well-executed. In fact, we could see this being be a design innovation Dell builds upon for future products as well. Yes, we personally like the way it looks and performs that much, though admittedly some may find Dell's bold industrial design departure jarring.

Indeed, beauty is in the eye of the beholder, as the saying goes. So, whether the XPS 13 Plus' understated design and super-clean lines are for you, is a question you'll have to answer for yourself. That said, though looks are only part of the equation, this is indeed one gorgeous 13-inch clamshell laptop. Take a gander for yourself in our hands-on preview video tour with Randall from Dell...

Dell XPS 13 Plus Features And Specs

Find The Dell XPS 13 Plus At Dell.com


Like many of the recent crop of ultralight laptops we've reviewed, Dell's new XPS 13 Plus has also been revamped under its hood as well, with Intel's 12th Gen Core Series processors, aka Alder Lake. The rest of this machine's config is pretty standard fare with a few notable highlights. On board our unit is 16GB of 5200MHz LPDDR5 memory (soldered) and a 512GB PCIe Gen 4 NVMe SSD. It is nice to see Dell go the distance here, unlike Samsung's Galaxy Book2 Pro that we recently looked at, that's only strapped with a PCIe Gen 3 SSD. The good news is, that SSD is also socketed in a standard M.2 slot, so future upgrades are technically possible, and unlike Apple's M1 and M2 MacBooks, a failing SSD will not brick your machine.

For connectivity, we're treated to Intel's Killer Wi-Fi 6 (AX211) Wi-Fi NIC with packet prioritization as well as Bluetooth 5.2, and a pair of USB Type-C Thunderbolt 4 ports. Unfortunately, that's where the connectivity ends, as Dell has removed both the microSD card reader and the headphone jack from this laptop. Since most folks are rocking wireless buds these days, the latter isn't as much of a concern (especially since Dell does include a 3.5mm USB-C dongle) but the former is a bummer for anyone that likes to work regularly with digital cameras, like our team here at HotHardware.

Other accoutrements include a 720p limited webcam that's Windows Hello capable at least, along with an ambient light sensor that should improve your picture somewhat. Although, in this day and age of work-from-home, we were hoping for 1080p resolution to up that all-important video conference game. Finally, a modest 55 Whr battery (more on this later) is on board and a bundled 60 Watt AC USB Type-C power adapter with Express Charge allows you to replenish the machine from zero to 80% in less than an hour. That's not as fast as some competitive machines but top offs are still reasonably quick.

From the top of its machined aluminum clamshell, the new Dell XPS 13 Plus doesn't look all that much different than the previous generation, with a slightly sloped stance and a wafer-thin 15.28mm Z-height.

However, pop the top and you realize this isn't the Dell XPS 13 of yesterday but something very different with still unmistakable XPS genetics. Our machine as tested here weighs in at just 2.7 pounds, but it feels very premium and solid in the hand, with a dense, rigid construction. And that's where the similarities end.


Say hello to Dell's seamless glass touchpad with force pad haptics. Dell notes the piezo technology on board "utilizes a series of small, actuated motors for precise, responsive feedback." We would tend to agree with that claim, as after just a short learning curve, we were navigating around with this invisible touchpad without issue. We should also note that the touchpad area is located underneath the space bar, right where it should be. And though the responsive area itself is only about the size of an average, large standard touchpad, it's accurate and smooth with an all-glass construction. The haptic feedback on clicks is an interesting trick too that feels a lot like what you may be used to with a standard clicky touch pad. In short, for us, Dell's radical touchpad departure works quite well and we like the clean aesthetic it the affords this notebook very much.

The XPS 13 Plus' keyboard has only a faint hint of flex but again it feels very premium, with much larger key caps as part of Dell's zero-lattice keyboard design. There is almost no spacing between the keys and this is a very comfortable typing experience, with reasonably deep key travel and no mush. Typing on this machine is a total pleasure, especially if you're an occasionally inaccurate masher like me, and the learning curve to achieve your personal best typing speed will likely not be very steep.

The XPS 13 Plus' capacitive function button row, on the other hand, may be a bit polarizing for some that regularly use these keys. This strip above the keyboard is basically a backlit patterned area that has capacitive touch points behind each icon. Users can switch between function or media keys, just by hitting the function button on the keyboard and the escape key. However, it's the lack of a key stroke feedback that may take some getting used to. Personally, we didn't think this was a big drawback at all, and again we simply like the clean design aesthetic this feature affords. However, these keys also stay continuously backlit, which also likely takes a small toll on battery life as well. 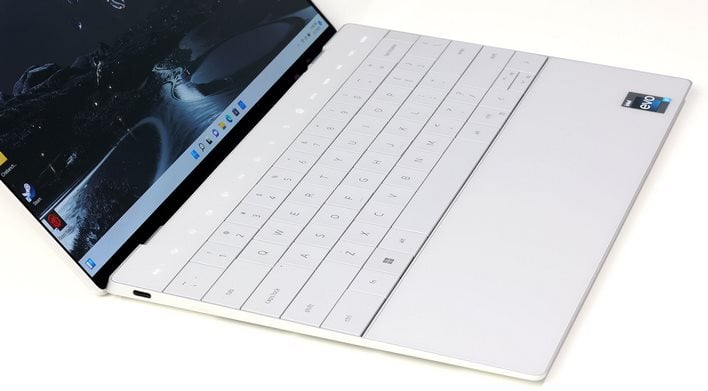 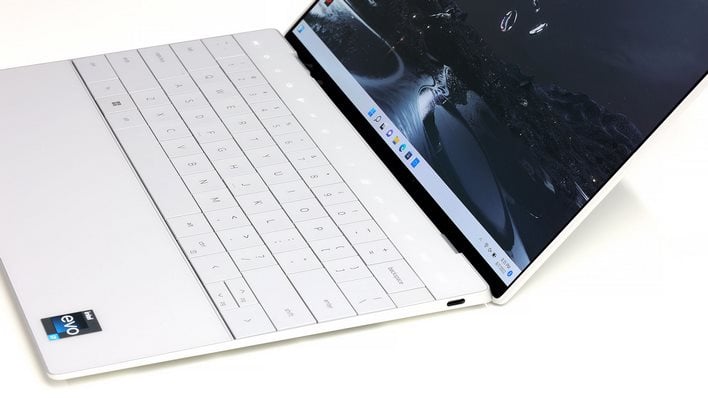 And the minimalist design of the Dell XPS 13 Plus continues, unfortunately for some, on its side edges as well. The machine has just two Thunderbolt 4 USB-C ports. While these ports do offer a copious 40Gbps of bandwidth, and Dell includes a USB-C to USB-A dongle, if you're charging the machine, this leaves only one spare USB-C port. And again, Dell also removed the microSD card slot here as well, so that spare port will have to support a card reader should you need one. Regardless, in this day and age of wireless peripherals and the like, it's less of a concern and more of something to keep in mind if IO expansion is high on your priority list.

Then again, oh my OLED, that is one gorgeous Dell InfinityEdge display...


The new Dell XPS 13 Plus is offered with 4 display configurations, ranging from FHD+ (1920X1200) non touch and touch options, to 3.5K and 4K OLED touch displays. Our machine was equipped with Dell's 3.5K (3456X2160) OLED touch display option and it delivers 400-nits of HDR 500 inky saturation and pop with great viewing angles. It also offers 100% DCI-P3 color gamut coverage, a 100,000 to 1 contrast ratio, anti-reflective coating, and it's encased in Corning Gorilla Glass 7. In a word, this is one stunner of a display. From its super thin bezels to its accuracy, good uniformity, and deep true blacks, this is one of the best 13-inch displays we've laid eyes on in a while.

Pulling in all of these industrial design innovations, excellent build quality, materials and workmanship, the Dell XPS 13 Plus is one beautiful thin and light laptop. But that's only part of the story, so let's fire this beauty up for some performance testing, next...
NEXT PAGE