Google Pixel 7 And Pixel 7 Pro Review: Refined In Every Way 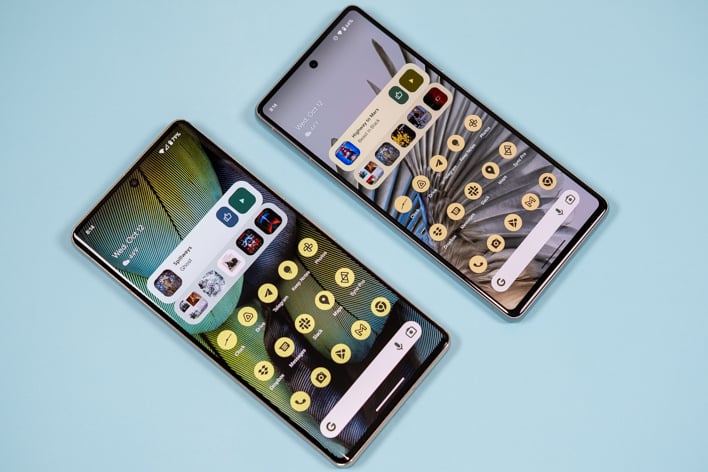 Google has released its own smartphones almost every year of Android's existence, going all the way back to the Nexus One in 2010. There were seven generations of Nexus phones, none of which were hugely successful, which led Google to shelve the Nexus brand in favor of Pixel. And here we are today at the seventh-generation in Google's Pixel lineup. There have been some rough patches along the way, like the Pixel 4's radar sensor that never took hold, but Google might really be onto something with the new Pixel 7 and 7 Pro.

These phones are an evolution of the Pixel 6 and 6 Pro, and that's exactly what Google needed them to be. Google has improved the build quality, upped the display brightness, upgraded the Tensor chip, and refined its Android software. In the case of the Pixel 7 Pro, Google also gave it an even better telephoto camera, and the camera experience collectively continues to be best-in-class.

Finally, if you need a phone that's good at being a phone, the Pixel 7 and 7 Pro are in a class of their own. But let's dig into the specifics and see what makes these new Pixels tick so well...


Google's latest Pixel phones are instantly identifiable as Pixels, which is a new trend for Google. The front of both phones is dominated by large OLED displays with a hole-punch selfie camera, and around back is the trademark Pixel camera bar. The styling of the bar and camera lenses is a bit different and cleaner, but these are Pixels through and through, and that's a good thing. 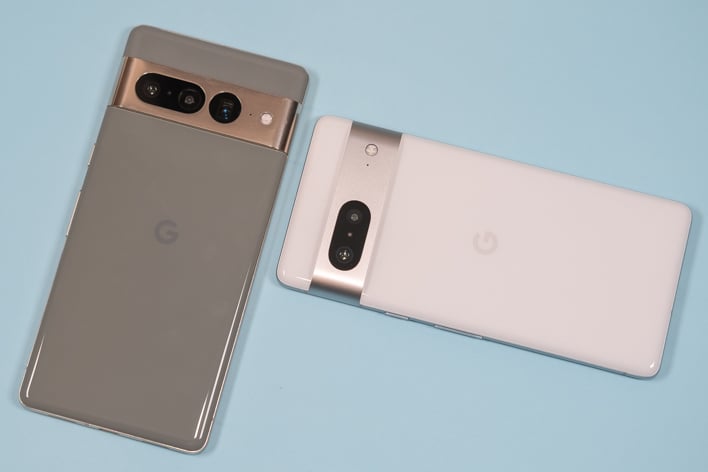 Google's occasional lack of focus has hampered its smartphone efforts over the years. In the past, Google started from scratch for the design of every generation of Pixel phones. Rather than learning from and addressing missteps, Google would seemingly just reinvent the wheel. The Pixel 6 and 6 Pro were better than past devices, with no glaring faults but definitely a few shortcomings, and Google has thankfully improved upon those devices this time around, instead of going back to the drawing board.

The Pixel 7 and 7 Pro sport an aluminum frame that wraps around the back, merging seamlessly into the camera bar. This is a more mature design compared to last year's phones, which had plastic inserts connecting the glass visor to the aluminum frame. The Pro models have a glossy metal finish, which does look flashy and more "premium," but the matte aluminum on the Pixel 7 is less slippery or prone to show fingerprints. Both phones have Gorilla Glass Victus on the back (an upgrade from Gorilla Glass 5 on the 2021 Pixels), and all the colors are glossy, so there will be plenty of fingerprints and smudges there. We prefer Samsung's silky matte glass in this respect. 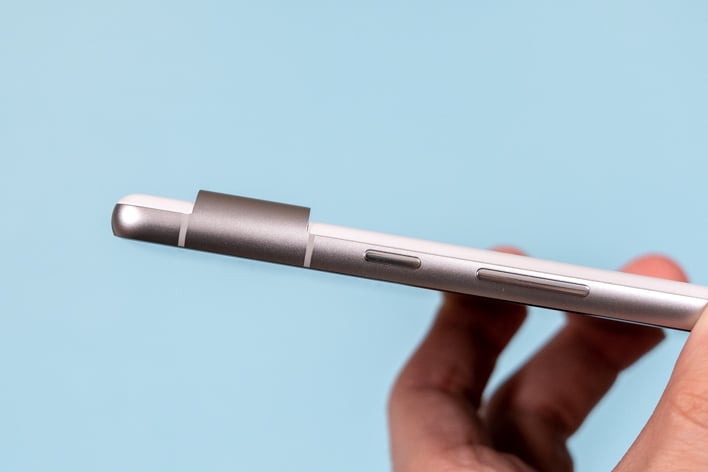 The screens are also protected with Gorilla Glass Victus. The Pixel 7 has a 6.3-inch OLED panel at 1080 x 2400 with a 90Hz refresh rate. The display is one of the primary upgrades for the 7 Pro with its 6.7-inch OLED at 1440 x 3120 and 120Hz. This is also an LTPO panel, which allows for dynamic refresh rate adjustments that can save battery. The 7 Pro's screen is sharper than the Pixel 7, but it's a minor difference you won't notice unless you have them side-by-side for comparison. The higher refresh rate on the 7 Pro is more important than the resolution bump, but the Pixel 7 is an appealing size. The 7 Pro is an enormous phone. The Pro's screen is slightly curved at the edges to make it easier to hold, but the curve is less aggressive than other big phones like the S22 Ultra or last year's Pixel 6 Pro. 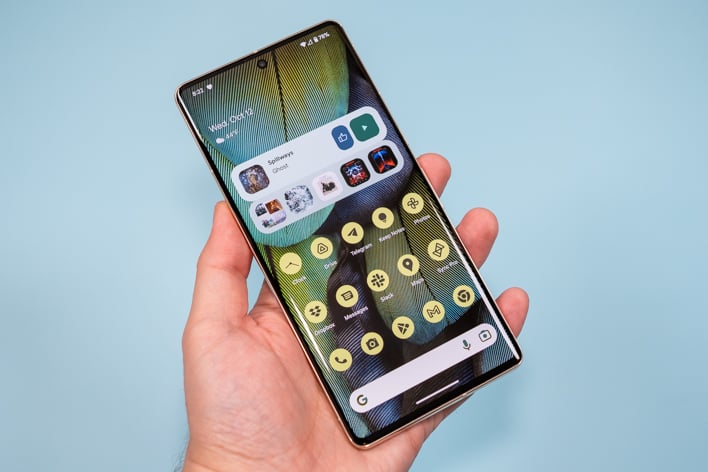 The Pixel 7 and 7 Pro support 1400 and 1500 nits of brightness, respectively. That's a sizable increase over last year, making the screens easier to read in direct sunlight. They're still a bit short of the peak brightness on Samsung and Apple, but they're more than good enough. An optical fingerprint scanner sits under the display, and it's faster than last year's. Though, it's not as quick as Samsung's latest ultrasonic sensors. One thing we don't love about optical fingerprint sensors is how bright they are when reading—they can light up a dark room. Ultrasonic sensors don't do that.


The Pixel 7 Pro is an enormous phone at 162mm tall, which is within a millimeter of the Galaxy S22 Ultra. Thankfully, Google made a smart design tweak this year. Both phones have the power and volume buttons on the right edge about a quarter of an inch lower than the 6 and 6 Pro, making them easier to press without shifting your grip. They're also much more sturdy and tactile than the Pixel 6's mushy buttons. We'd also give Google props for improving the antenna window. The Pixel 6 Pro had a huge plastic insert covering most of the top edge for the millimeter wave (mmWave) antenna, but the 7 Pro has a much smaller color-matched window on the top, similar to the design Samsung and Apple use on their phones.

Google's latest phones are the only ones shipping with Android 13 out of the box. The changes from one Android version to the next aren't as profound as they once were, so it's not the end if you're still languishing on Android 12, but getting Google's Pixel build of Android is a primary selling point for these phones. 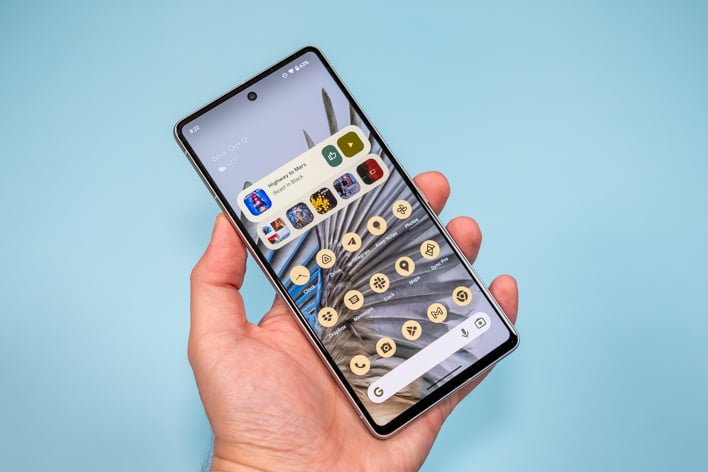 Google no longer makes phones with "stock" Android since pivoting from Nexus to Pixel, but it doesn't give its Android skin a name. Regardless, Android 13 on the Pixel 7 and 7 Pro looks better than it ever has before. Google is opening up the Material You visual features it debuted last year to third-party developers. That means apps are finally beginning to plug into the icon, widget, and app UI themes. The animations, menus, and themes make for a genuinely beautiful, clean user experience.

That said, there are a smattering of bugs in the version of Android 13 we've been testing, including some minor cellular connectivity issues and app crashes. The current software is pre-release, so some of this could be fixed before most people get their hands on the phone. On the other hand, Google did have trouble squashing Pixel 6 bugs last year, possibly thanks the new custom silicon—fingers crossed we don't see a repeat this time.

These phones both run on the second-gen Tensor system-on-a-chip, which has several minor improvements. The GPU is more powerful, two of the eight CPU cores have been upgraded to new designs, and the Tensor Processing Unit (TPU) is more capable. The custom silicon in Tensor has allowed Google to implement AI features exclusive to Pixel phones, like live translation, voice typing, and magic eraser. 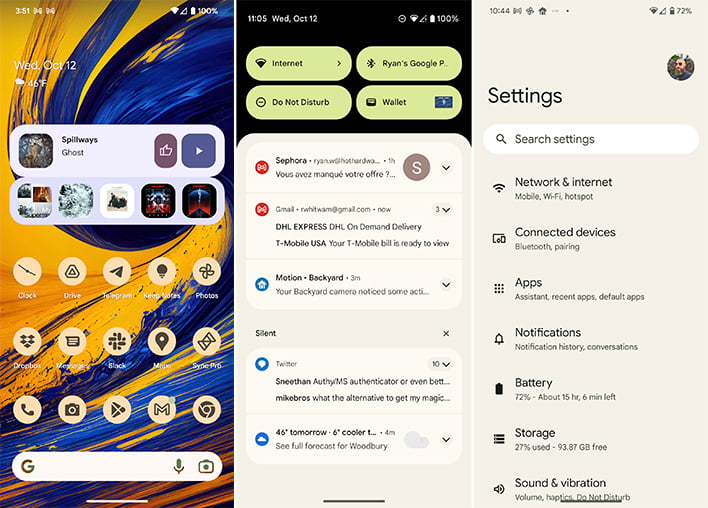 There aren't as many new software features this time around, but what there is will impress. For example, the latest Pixels add AI features like Guided Frame to help those with low-vision take selfies and Clear Calling to enhance voice calls (coming in an update later this year). One of the coolest new features is Photo Unblur. Pixels already had the ability to use AI to unblur faces in photos when you take them, and now you can do that with an entire shot. It doesn't even matter if you took the image on the Pixel. We dug up some photos taken on lesser phones almost a decade ago that came out blurry, and the Pixel 7 was able to make them presentable. 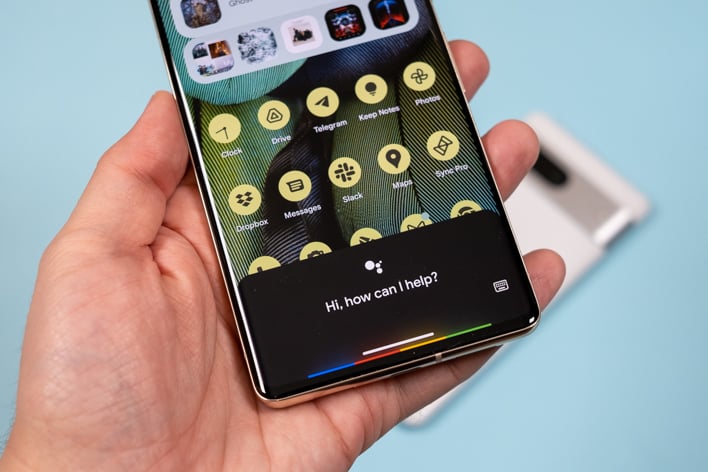 It's easy to forget that smartphones are still phones, and most device OEMs don't focus on improving the calling experience. Google has supported Call Screen for the last few years, which uses a bot and voice transcription to find out who's calling before you pick up. It can even recognize and automatically reject spam calls. Again, there's not much new here, but this continues to be one of the best features on any smartphone.

Direct My Call debuted last year, turning automated phone tree options into an easier-to-use list of options. With the Pixel 7, Google has further enhanced this feature by showing the options even before the phone robot has finished reading them off. It does this with data from its Duplex service, which has already called a lot of these businesses. These new Pixels make us hate phone calls less, and that's a win.

Finally, Google's guarantee of security patches for at least five years is excellent, matching Samsung for the best update pledge among flagship Android phones. However, Google only promises three years of OS updates. That's a year less than Samsung, but Google does release new versions of the OS quickly. While the Pixel 6 and 6 Pro have been on Android 13 for weeks, Samsung is still testing its updates for the S22 family. Still, Google should strive to update these phones even longer, now that it's designing its own chips. 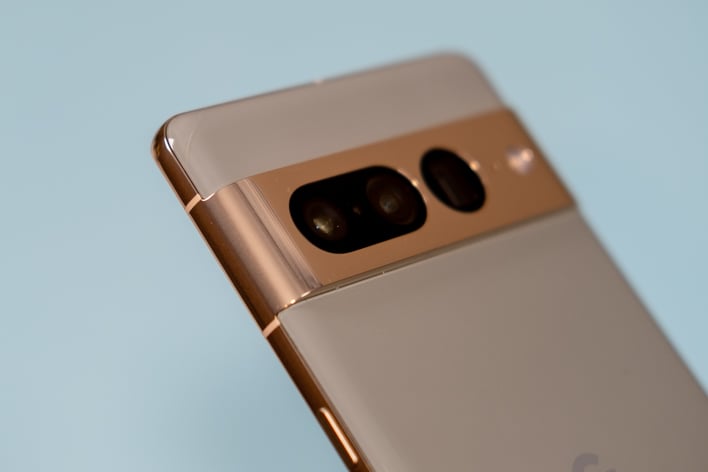 The camera setup of both phones is helmed by the 50MP wide-angle sensor. Although, you can't even take photos in the full 50MP mode. Images are binned to 12MP, leveraging Tensor's AI power to deliver crisp, bright photos. Most phones let you switch to full resolution, and we're a little irked Google doesn't, but the results from the camera are so good that it's hard to complain. The way the Pixel can track subjects, balances light, and render skin tones accurately shows how far computational photography has come. Again, it comes back to Tensor. It may not be the fastest chip in generic performance tests, but it powers a lot of the Pixel's unique features.


Both phones also share a 12MP ultrawide camera sensor capable of taking landscape shots with impressive detail given the low-ish resolution. Google's borderline magical HDR processing ensures that even frames with highly varied lighting come out looking like you remember. The Pixel 7 Pro improves upon the Pixel 7's ultrawide in one important way: autofocus. That means the 7 Pro can switch automatically to macro mode with the ultrawide sensor when you get close to your subject. The results are vastly brighter and sharper than what you get from any of those crummy dedicated macro sensors on OnePlus and Motorola phones.

The last element of the camera visor is only for the Pixel 7 Pro: a 48MP 5x periscope zoom, which has slightly more reach than the 4x on last year's phone. The aperture is narrow at f/3.5, so it's not ideal for low-light, but the phone will automatically switch to cropping the main sensor in that case. Plus, Google still has its AI-assisted Super Res Zoom on board, which now goes up to 30x. This feature uses AI algorithms to sharpen digitally zoomed photos. It won't work miracles—30x shots are rarely going to be worth sharing, but results at 10x (double the maximum optical zoom) are surprisingly sharp.


Even in extreme low-light, the Pixel 7 can take usable photos with Night Sight. This feature has been improved on the latest Pixels, with captures roughly twice as fast as the Pixel 6, according to Google. With shots in middling light, that appears to be true—it's sometimes barely any slower than a regular photo capture. You will still have to wait a few seconds in very dark conditions, though.


Google's latest Pixel phones offer the best camera experience for most people, but that's not to say they're the most powerful. Something like the Galaxy S22 Ultra, with its raft of pro mode settings and more focal lengths, is better perhaps if you want to tinker with your photo composition.