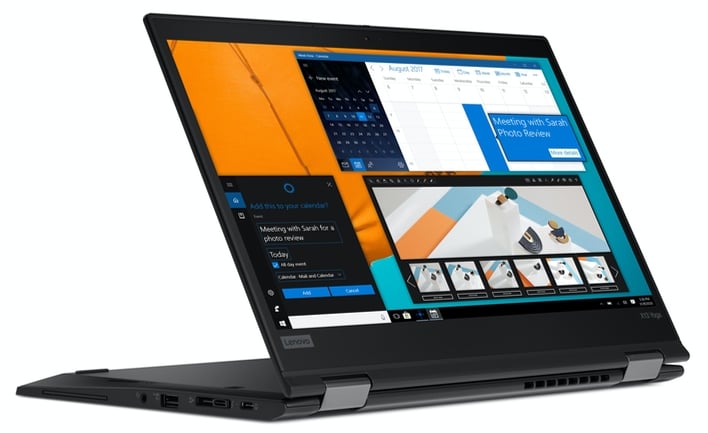 Lenovo is back again for another round of notebook/convertible refreshes including its popular T-Series and X-Series families. All of the systems are either powered by Intel Comet Lake processors or in some instances, the latest mobile APUs from AMD.

In the case of the ThinkPad X13 and X13 Yoga, Lenovo has trimmed the fat from the laptop and convertible respectively, making them smaller and lighter than their predecessors. Lenovo has also upgraded the available processors with 10th generation Core i5 and Core i7 configurations (up to 6-core/12-thread) with or without vPro.

Interestingly, Lenovo is also making the ThinkPad X13 available with AMD's new 7nm Zen 2-based Ryzen 4000 mobile processors. However, the company didn't give any more specifics on what exact SKUs will be available.

Other specs between the two machines are very similar including a 2.85-pound weight, 48WHr battery (50WHr for the ThinkPad X13 Yoga), Thunderbolt 3 support, Wi-Fi 6, and optional LTE connectivity.

Moving on to the beefier T-Series, Lenovo has announced revamped ThinkPad T14, T14s and T15 notebooks. Like the ThinkPad X13/X13 Yoga, Lenovo is powering these machines with 10th generation Core processors (up to Core i7 vPro).

The T14s is the most compact of the trio, cramming its 14-inch display (4K UHD resolution available) into a chassis that weighs as little as 2.98 pounds. It is available with up to 32GB of RAM, and up to a 2TB SSD. Graphics are limited to an integrated Intel GPU due to its slim frame.

The T14 (14-inch) and T15 (15-inch) are also available with optional 4K UHD resolution displays, but also offer NVIDIA GeForce MX330 discrete graphics. They also bump maximum memory capacity to 48GB, while retaining the 2TB maximum for the PCIe SSD. Other odds and ends include Thunderbolt 3 support, Wi-Fi 6, LTE connectivity and up to a 57WHr battery.