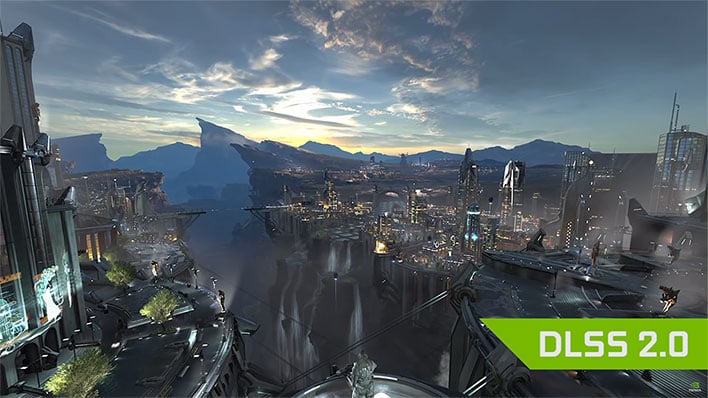 NVIDIA made some big promises when it first outed its Deep Learning Super Sampling (DLSS) technology. Through the wonders of artificial intelligence and machine learning, DLSS aimed to make games look better at higher resolutions, and boost framerates without overburdening the GPU. Results were mixed, though, and certain limitations held the technology back. Now with the introduction of DLSS 2.0, NVIDIA is promising even bigger and better things.
DLSS 2.0 delivers a "big leap in AI rendering" and breaks free of several existing constraints. The biggest one is game support—DLSS 2.0 has the potential to be more broadly supported in games because, unlike before, it does not require training for each new game. DLSS 2.0 is trained using non-game specific content on a generalized network that works across games.

NVIDIA also says its neural network is twice as fast because DLSS 2.0 utilizes Tensor cores, specialized hardware found in GeForce RTX cards, more efficiently than before. This means that every GeForce RTX card stands to benefit, including the the GeForce RTX 2060, which is the least powerful in the GeForce RTX series.
"A new AI network more efficiently uses Tensor Cores to execute 2X faster than the original. This improves frame rates and eliminates previous limitations on which GPUs, settings, and resolutions could be enabled," NVIDIA says. 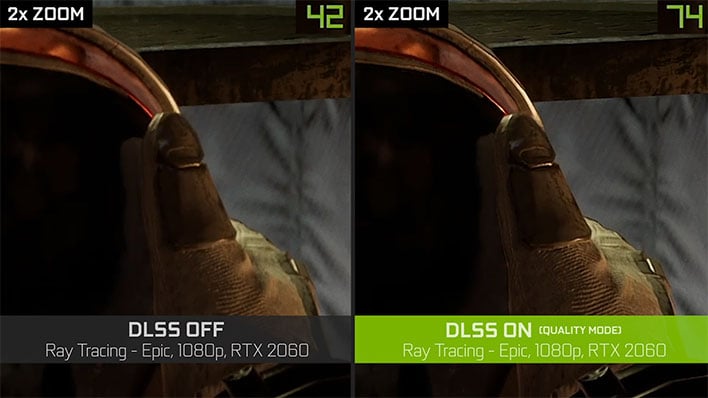 Therein lies the other major benefit—DLSS 2.0 can be enabled at any resolution. Users now have three quality options to choose from, including Quality, Balanced, and Performance. If running a game at 4K, selecting the Quality setting would render at 66 percent the resolution, or 1440p. Likewise, selecting Balance would render at around 58 percent the resolution (1250P), and Performance would render at 1080p, all of which would upscale images to 4K.
"DLSS 2.0 offers image quality comparable to native resolution while rendering only one quarter to one half of the pixels. It employs new temporal feedback techniques for sharper image details and improved stability from frame to frame," NVIDIA explains. 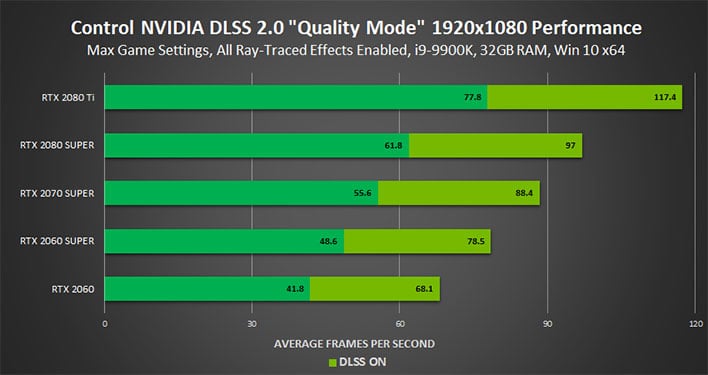 We are eager to test things out on our own, and in the meantime, NVIDIA is making some lofty performance claims. As it pertains to Control, the performance chart above shows DLSS 2.0's Quality setting at 1920x1080 and 2560x1440. Framerates see up to a 76 percent boost in NVIDIA's own testing. At 4K, NVIDiA says Performance mode delivers gains of 2-3X, "enabling even GeForce RTX 2060 gamers to run at max settings at a playable framerate."
NVIDIA saw similar improvements when testing Deliver Us The Moon. Just as importantly, NVIDIA claims "DLSS 2.0 delivers image quality on par with native resolution gameplay" by leveraging the game's built-in temporal anti-aliasing technique. NVIDIA even claims subtle improvements with DLSS 2.0 enabled make the game even look better.

Here's a look at how it runs in MechWarrior 5: Mercenaries...

This is a welcome update, particularly if it works as advertised (we'll perform our own testing to find out). it also follows the recent announcement of DirectX 12 Ultimate, which is supported by all GeForce RTX graphics cards as well.
In short, this is shaping up to be a fantastic year for PC gaming. You can read more about DLSS 2.0 in NVIDIA's blog post (hit the link in the Via field below).