We used the Pixel 5 mostly on AT&T and T-Mobile’s low-band 5G networks in San Francisco (bands n5/n71 850MHz/600MHz) and didn’t have any issues with call quality or data speeds. This phone also supports mid-band 5G (n41, 2.5GHz) on T-Mobile, plus mmWave 5G on both AT&T and Verizon, but these networks aren’t deployed in our area. Note that the Pixel 5 Google sells abroad only supports sub-6GHz 5G. 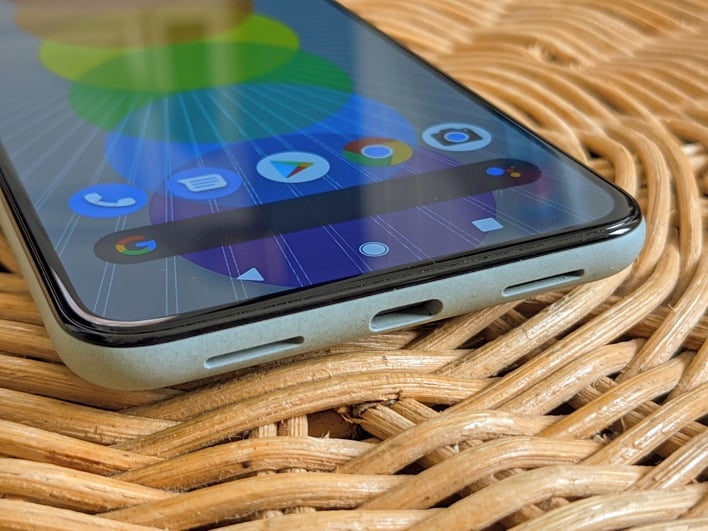 On the audio front, the Pixel 5 has stereo speakers, but it’s not what you think. The bottom edge-firing driver handles one channel, but there’s no earpiece for the other channel. Instead, the surface of the display is used as a speaker. This works fine for calls, but sounds tinny with music. While there’s no headphone jack, the Pixel 5 supports both analog and digital audio devices over USB Type-C plus aptX HD and LDAC over Bluetooth.

We’ve now reviewed quite a few Snapdragon 765G-equipped handsets here at HotHardware, and our takeaway is mostly the same each time. For day-to-day apps, this chip performs well enough to provide a smooth and fluid user experience. It’s only when doing graphically-demanding tasks -- like hardcore gaming -- that you notice a difference. Combine this with the power efficiency of a built-in 5G modem (X52), and this SoC is a winner for most users.

This begs the question: does a phone still need a flagship processor to be called a flagship in 2020? Overall, the Snapdragon 765G -- combined with a 90Hz screen, 8GB of LPDDR4X RAM, 128GB of UFS 2.1 storage, and a clean build of Android 11 -- makes the Pixel 5 sing. It’s not OnePlus Nord snappy, but it’s still pleasantly quick, and -- despite Android 11’s apparent performance degradation -- it juggled our normal set of apps with aplomb. 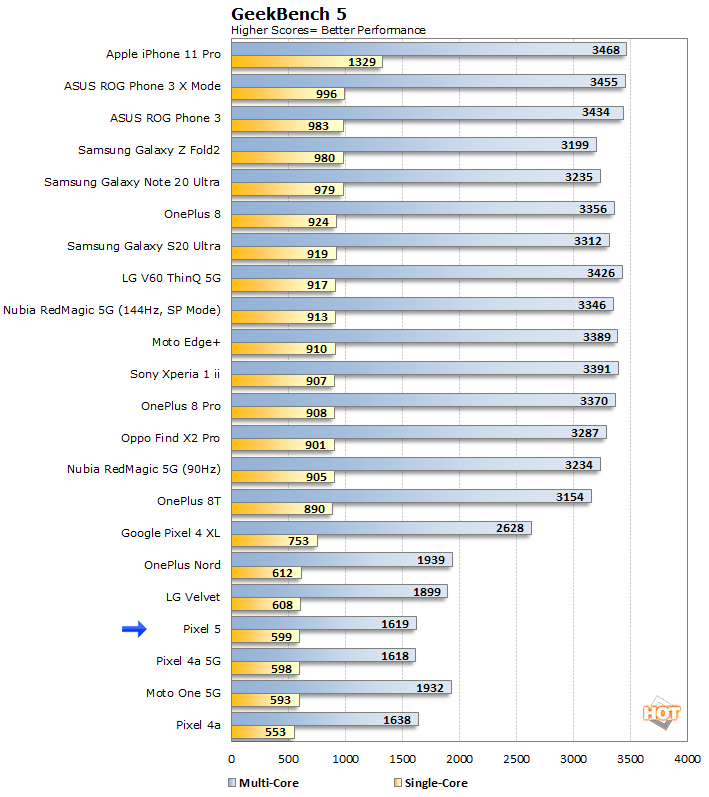 In these Geekbench 5 tests, the Pixel 5 finishes in the bottom of the pack. The iPhone 11 Pro still has the strongest single-core performance overall, but the Pixel 5 lags behind other Snapdragon 765G-equipped Android 10 devices. You can get a good feel for the Android 11 performance drop by comparing the Pixel 5 results with the Pixel 4a scores. 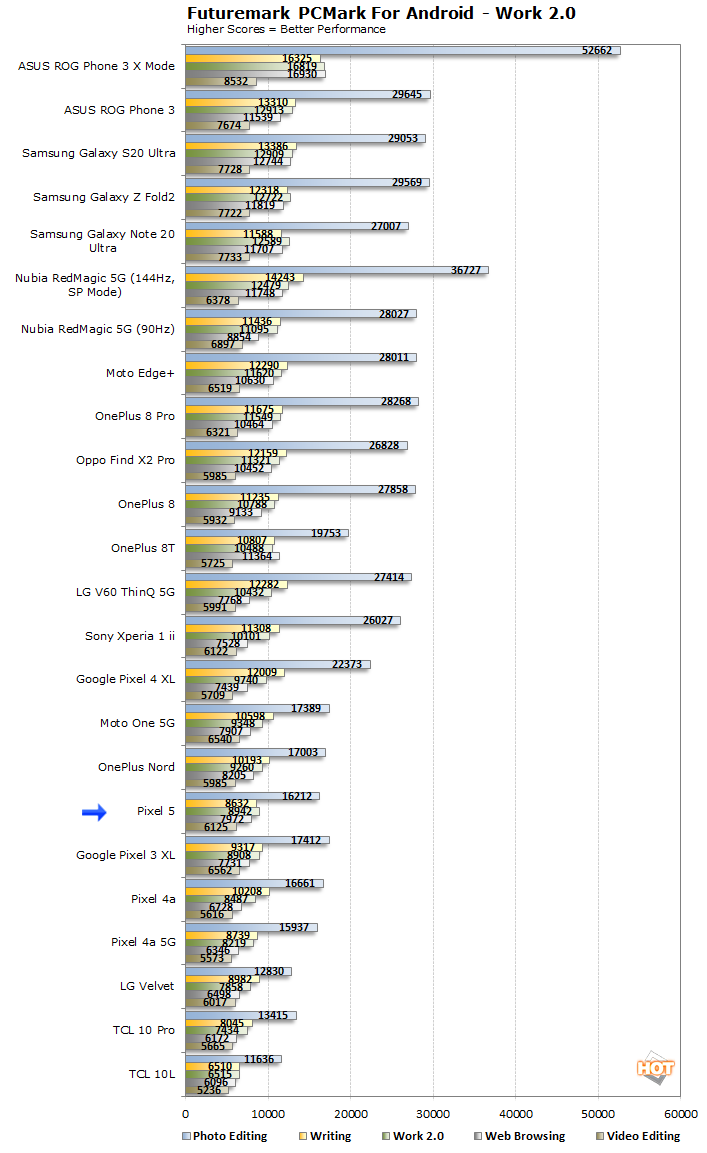 In PCMark, the Pixel 5 just beats Google's Snapdragon 845-equipped Pixel 3 XL flagship from 2018. While the Snapdragon 765G powering the Pixel 5 clearly doesn't match the performance of current flagships for the workloads used in PCMark for Android, these results are still respectable. 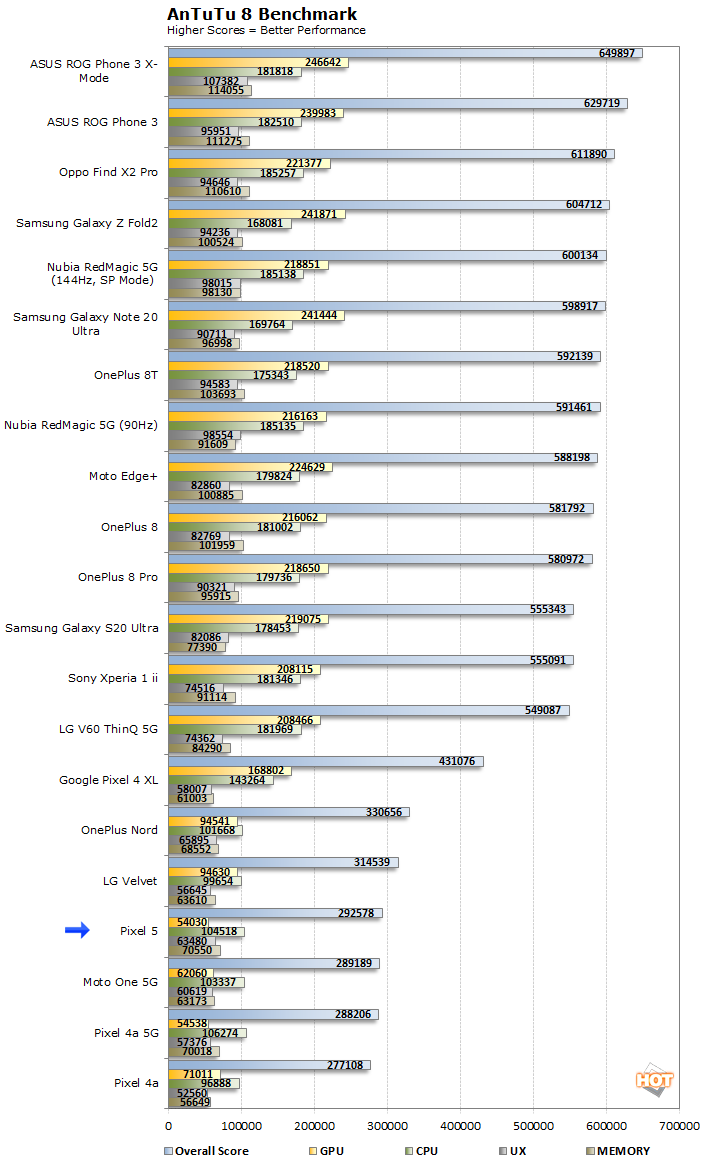 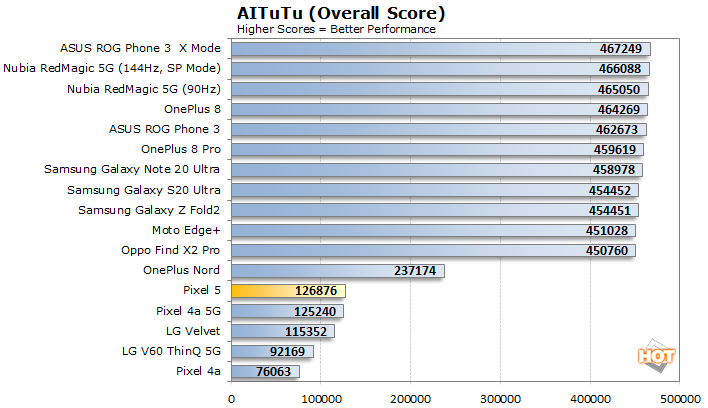 Next we're checking how the Google Pixel 5 compares in GFXBench, which has been one of the standard mobile graphics/gaming performance benchmarks for years. To ensure that display refresh (v-sync) and resolution aren't limiting factors, we're comparing off-screen test results here. GFXBench tests OpenGL ES graphics workloads and we're specifically testing OpenGL ES 3.0 and 2.0... 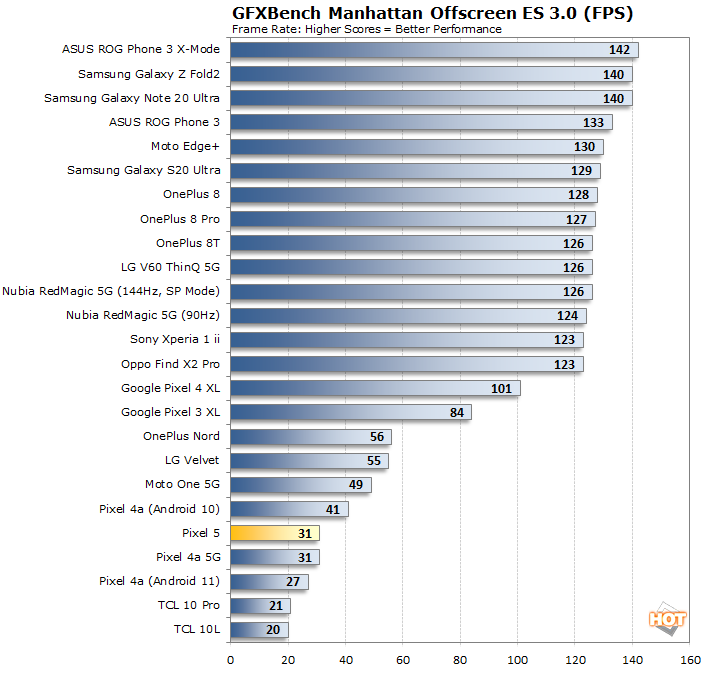 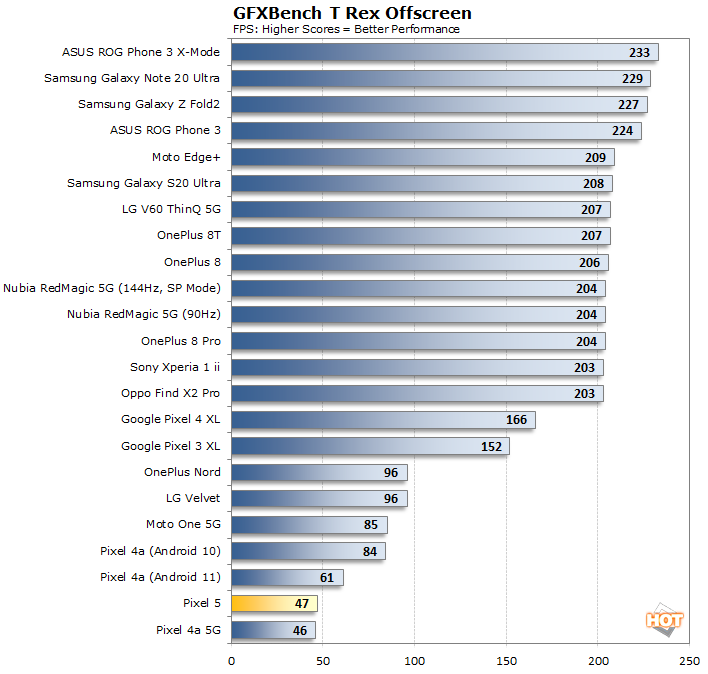 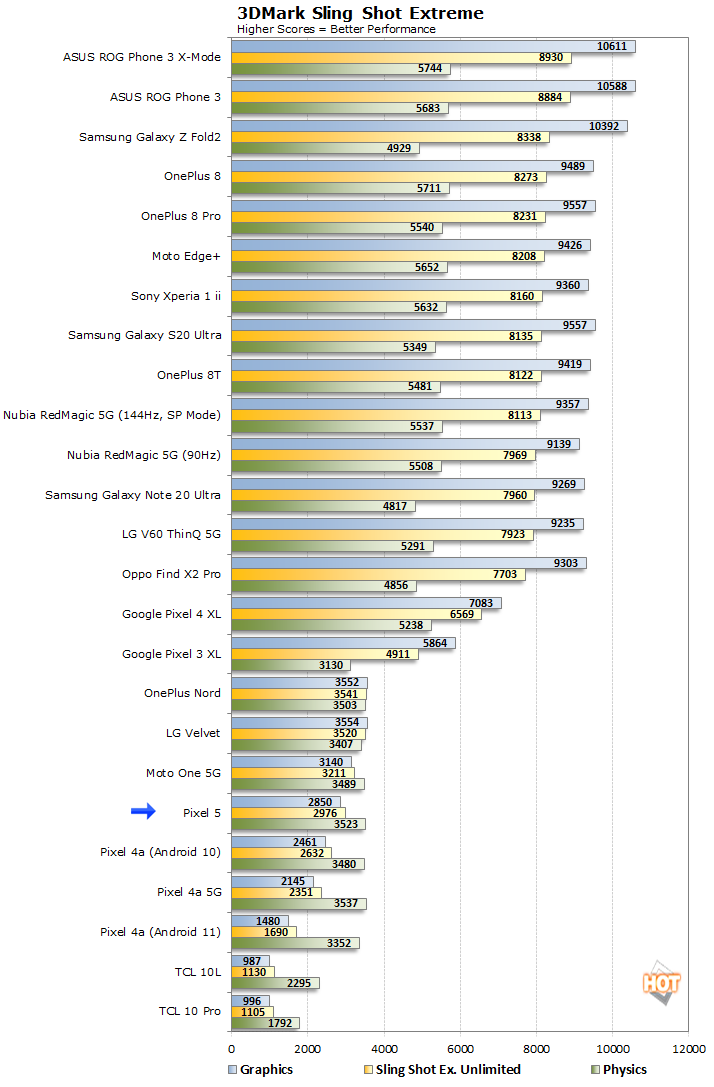 The Google Pixel 5 also performed worse than current flagships in these 3DMark tests. It scored about 3/4 of what the Snapdragon 765G-equipped OnePlus Nord scored, but still almost 3x better than the Snapdragon 665- and 675-equipped TCL 10-series.

The capacitive fingerprint sensor is fast and reliable, but its placement in the back feels a bit dated. We’d have preferred a scanner embedded in the power/lock key, for a cleaner, more modern look. Unlike many competing phones, there’s also no face unlock of any kind -- not even a basic 2D implementation without support for mobile payments. Haptics live up to Google’s usual high standards, though. 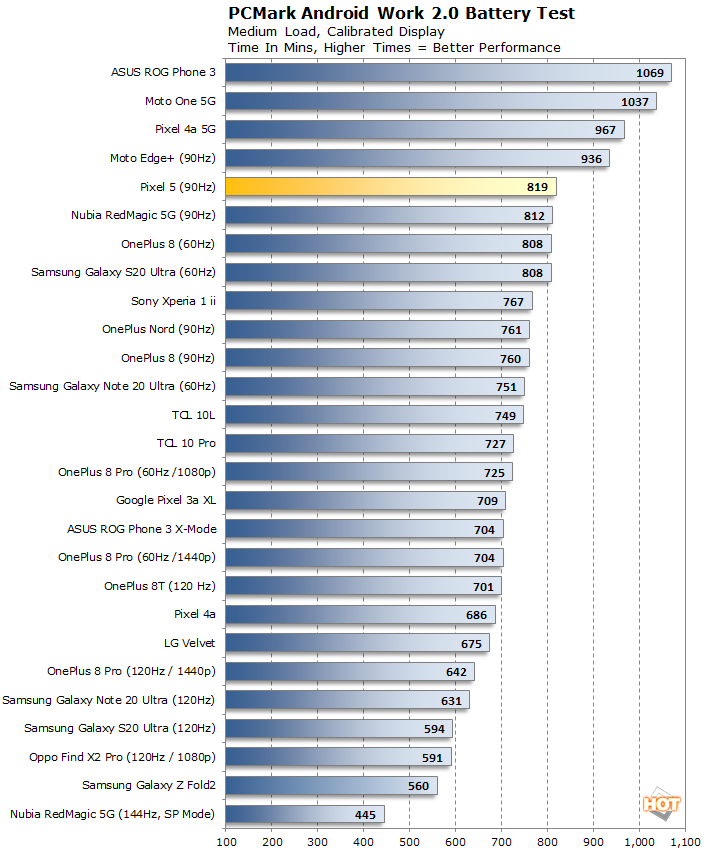 Battery life is surprisingly decent. The 4080mAh battery kept the Pixel 5 ticking for 13 hours and 39 minutes in our PCMark test -- at 90Hz no less. As such, you can expect the battery to last a busy day on a charge. Topping off is reasonably quick thanks to 18W wired fast charging (USB PD), and there’s an 18W charger supplied in the box. Alternatively, there’s also Qi-compatible wireless charging, plus reverse wireless charging.