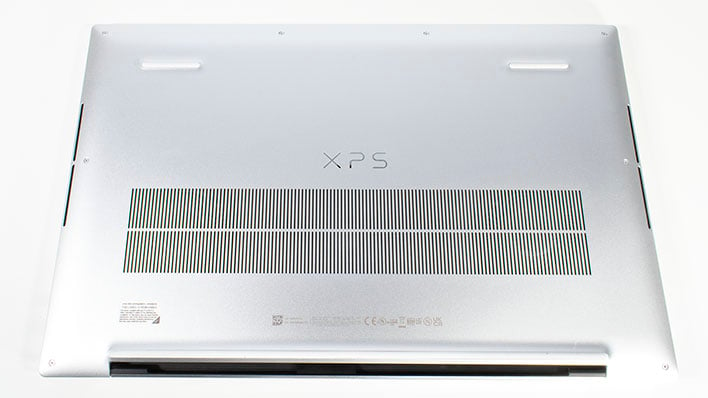 The 2021 version of the Dell XPS 17 9710 has an all-aluminum body, and that includes the bottom panel. Right where the two cooling fans are, Dell added some generously proportioned vents that pull cool air in. A pair of feet on the front (top of the photo) and a bar along the backside (bottom) keep the system up off a desk or table to make room for air to flow through.

Getting into the XPS 17 was a bit of a harrowing experience. First we backed out the eight Torx T6 screws from the body and set them aside, and then nothing happened. We ruined a couple of thin guitar picks trying to separate the aluminum and carbon fiber keyboard deck at different points on the enclosure. We just couldn't get the bottom off. After consulting Dell's service manual, posted on its website, and watching a couple of YouTube videos, we confirmed that yes, these were the only screws to remove, and started one last time with a third guitar pick.

At that point the aluminum shell started to separate from the top and we could peel it off, without bending anything irreparably. The clips inside the XPS 17 are just quite strong, and they were not prepared to let go of the bottom. That's not a bad thing, of course; the system is built securely and we like that aspect of it. However, buyers who want to upgrade down the road will want to make sure they have everything they need to install for a single pass, rather than doing it piecemeal because getting under the hood can be a bit difficult. 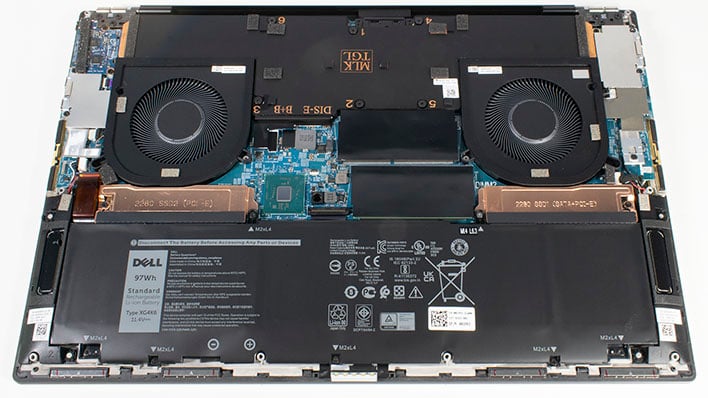 Once we were in, we can see two beefy blower-style cooling fans and a plastic insulation that separates the cooler from the body. As you can see, the internal layout of the machine is also quite clean. Behind each fan sits a decent-sized cooling fin array that then allows the fans to push heat out the rear vents that sit behind the bottom half and the hinge. When the system is under full load, we can feel heat waft up from the rear vents and out of the system. This big cooler covers both the GeForce RTX 3060 GPU and the Intel Core i7-11800H processor.

Below the enormous cooler sits a pair of DDR4 SO-DIMM slots and a pair of M.2 2280 slots for solid-state NVMe storage. The SO-DIMM slots were both pre-populated with 16 GB of DDR4-3200 memory, so those who buy less early on can upgrade down the road. The left M.2 slot had our primary SSD installed under a copper heat spreader, and the right slot was empty and waiting for a second drive.

Towards the front edge we can see the huge 97 Wh battery Dell includes in the XPS 17 9710, and it's fully user-replaceable with the removal of just a few screws. On either side sit the pair of dedicated woofers that make up the low end of the system's quad-speaker sound system.

Reassembling the system is much easier than getting it apart, as the bottom cover snapped right back into place and the eight Torx screws went right back in where they belonged. Now it's time to see how the XPS 17 can handle the heat.

At idle, the XPS 17 was basically silent. We couldn't detect the fans spinning at all, and when doing some light web browsing, they only spun up to a barely-audible level. To get the system all worked up, we used the Middle Earth: Shadow of War benchmark on repeat until the system hit its high point both thermally and acoustically. At that point we used our trusty sound meter and thermal gun to capture noise and surface temps. 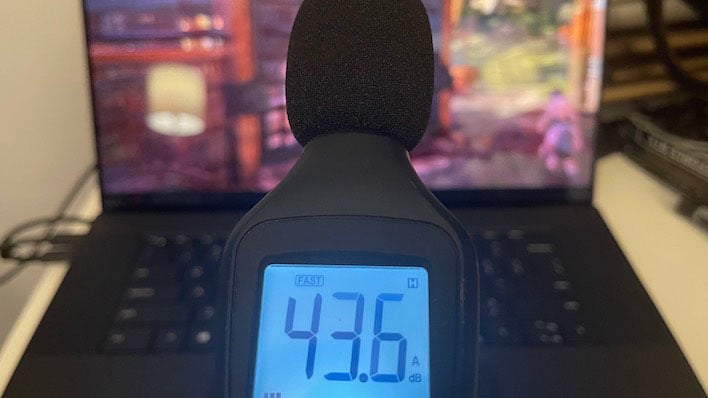 At 24 inches from the display, we only measured 43 to 44 dBA. That's a very tame measurement, as it wasn't loud at all and the fan pitch is not distracting or annoying. Those two blower fans are pretty large, all things considered, so they didn't have to run all-out as loud as possible to push enough air to keep the XPS 17 comfortable. There's no whine or high-pitched tonality coming out of the system, just the sound of air flying over the fins and through the vents, into the room. 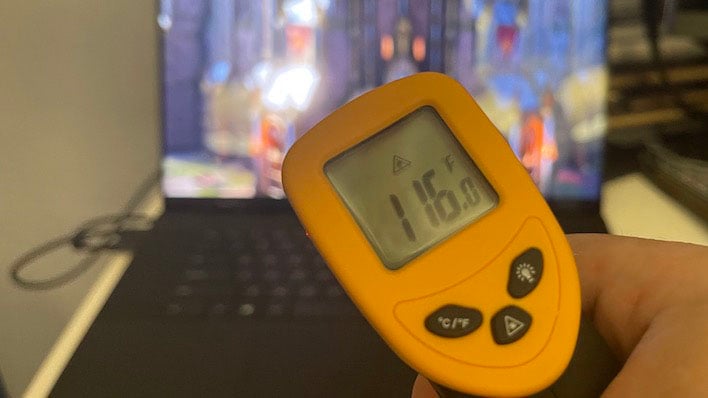 We had to fish around for the hottest point on the surface of the notebook, because the area right above the vents wasn't all that hot. We did finally find it between the vents and right in front of the hinge, about half an inch above the keyboard. Even then, it only measured around 116 degrees F (46.67 C), and the temps cooled quickly as we wandered from the hot spot. The number row was warm to the touch, for sure, and measured 108 F, but by the time we got to the keyboard's home row, the hottest we measured was 92 F. These thermal and acoustics are fine for gaming, for sure, and are even more subdued when the system isn't running all-out.  The 2021 Dell XPS 17 is a really well-behaved and well-engineered machine. 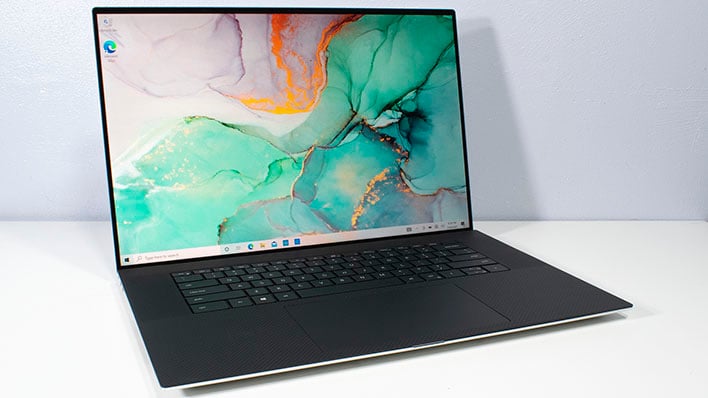 Overall, the Dell XPS 17 9710 is a larger format but elegantly designed laptop. It certainly lives up to its XPS name with premium materials, solid construction, excellent performance, and a very good thermal showing. While it's a 17-inch class machine, it's actually a few square inches smaller than the Alienware m15 R5 Ryzen Edition or the m17 R4 with Intel 10th-gen Core CPUs that we've reviewed this year. Buyers who might covet a larger display shouldn't be concerned with the XPS 17's size just because of the "17" in the name. It's bigger than an XPS 15, sure, but with its InfinityEdge display and svelte chassis, the XPS 17 9710 offers a very space-efficient layout.

The external features of the XPS 17 9710 really make this notebook shine. Dell's XPS systems always have a very good keyboard experience, the Precision Touchpad is big and responsive, and the display is wonderfully bright, vibrant and accurate. Maybe it's just the software developer in me, but I really like 16:10 displays that can show just a few more lines of code. It can also play standard 16:9 videos without controls overlaying the content, which is always nice too. The display's 500 nit maximum brightness is plenty bright for SDR content, and the UHD+ 3,840x2,400 option we tested is sharp as a tack, thanks to a density of 266 pixels per inch.

As we discovered on the previous page, the 2021 XPS 17's performance was extremely good. Intel's Tiger Lake-H Core i7-11800H is a very capable CPU, and buyers who want a little more oomph can opt for the quicker Core i9-11900H instead. The new Dell XPS 17 scored at the top of our CPU-focused charts in productivity and rendering (although that's not really a task we might do with a laptop very often). Gaming performance is also solid, but it's a little less standout, thanks to the lower thermal budget the XPS 17 affords. That reduced power paid off in acoustic and thermal performance, though performance was a little lower than comparable GPUs in gaming-focused notebooks, which was to be expected. The new XPS 17 is still plenty fast for playing just about any of today's biggest game titles, though. 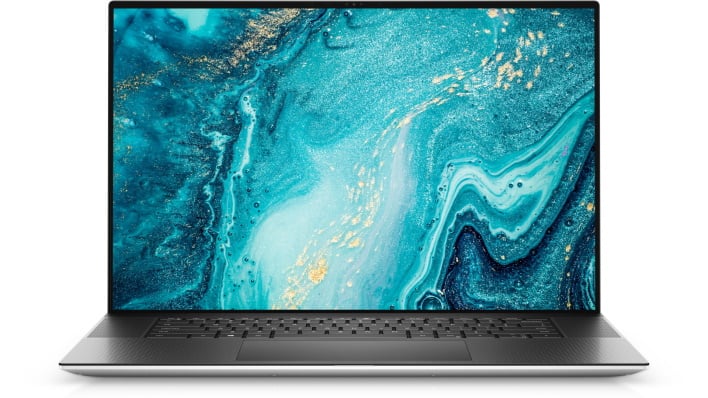 
The one gripe we did have is related to the My Dell app. People who buy premium notebooks and spend thousands of dollars do not expect or want a system app to dedicate a full third of the screen to ads. Fortunately, they don't appear if you don't use the app, but it just feels odd. We're asking Dell to reconsider this decision and pull ads for third party services. It detracts from the premium aesthetic at which Dell aims the XPS 17.

Speaking of premium, the Dell XPS 17 9710 starts at $1,549 for a Core i5-11400H, GeForce RTX 3050 graphics, 8 GB of RAM, a 512 GB SSD, and a nice 1200p display. Those are significant steps down from our review unit in every way, but remember that the system allows user upgrades in RAM and SSD so it's always possible to bump specs up later on. Stepping up to the Intel Core i7-11800H, GeForce RTX 3060, 32 GB of RAM, and a 1 TB SSD with that scrumptious 2400p 4K touch display more than doubles the price, all the way up to $3,149 from Dell. The company's configurator allows for every conceivable step along the way though, so hitting a specified budget should be pretty simple. Regardless of what you pick, the machine's four Thunderbolt 4 ports and SD card reader are always present, which is a healthy appointment of IO options.

Overall, the 2021 Dell XPS 17 is the notebook for folks who want the most portability possible while still retaining a large, bright, and sharp display. Its footprint is much closer to that of some 15" notebooks, but with a big, beautiful 17-inch 16:10 panel to work with. The XPS 17's productivity performance is excellent while its gaming capabilities are very solid as well. The XPS 17's battery life up-time was also very good, especially considering that 17-inch 4K panel. The Dell XPS 17 model we tested delivers the total package, and it should for the high-end price tag our machine commands. Regardless, laptop consumers in the market for a machine with a premium, high-end display and a top-notch PC platform to drive it would do well to start with the new Dell XPS 17.