Intel's Supercharged Thunderbolt 4 Delivers Gobs Of Bandwidth, Aims To Replace All Your Cables 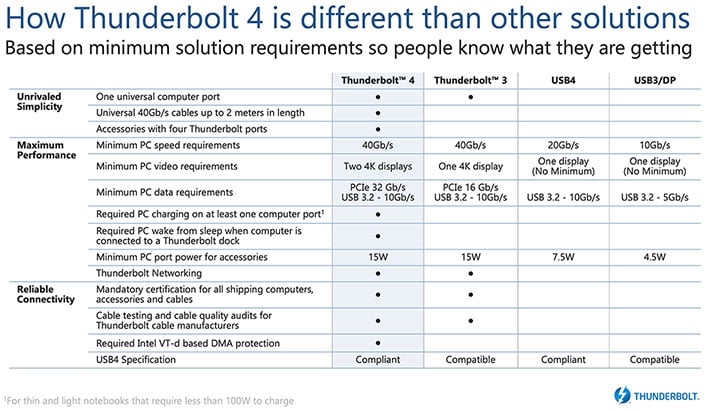 Thunderbolt 4 is a more flexible specification. In addition to requiring 40Gb/s data speeds, Thunderbolt 4 PCs will be able to charge on at least one Thunderbolt port, for thin and light systems that require less than 100 watts.
"Thunderbolt provides consumers with a leading connectivity standard across a range of devices, helping to advance computing experiences and delivering on the promise of USB-C with simplicity, performance and reliability. The arrival of Thunderbolt 4 underscores how Intel is advancing the PC ecosystem toward truly universal connectivity solutions," said Jason Ziller, Intel general manager of the Client Connectivity Division. 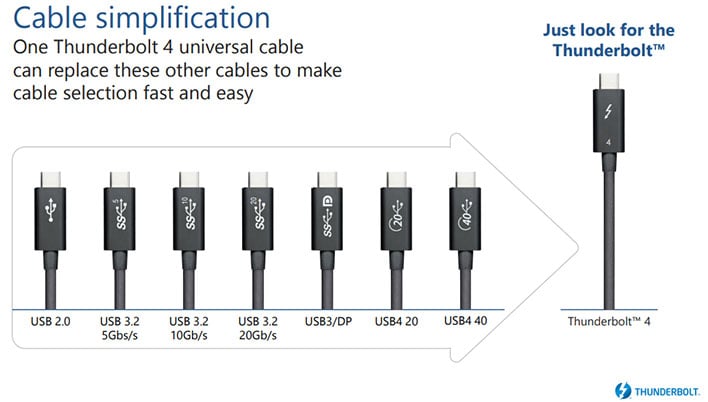 Intel is also touting a broad set of industry standard specifications. Thunderbolt 4 ups the ante with required support for USB4, along with DisplayPort and PCI Express (32Gb/s for storage speeds up to 3,000MB/s). It is also fully compatible with previous generation Thunderbolt and USB products. Notably, Intel points out that Thunderbolt 4 and USB4 will use the same underlying protocol specification to improve compatibility of USB-C based products. 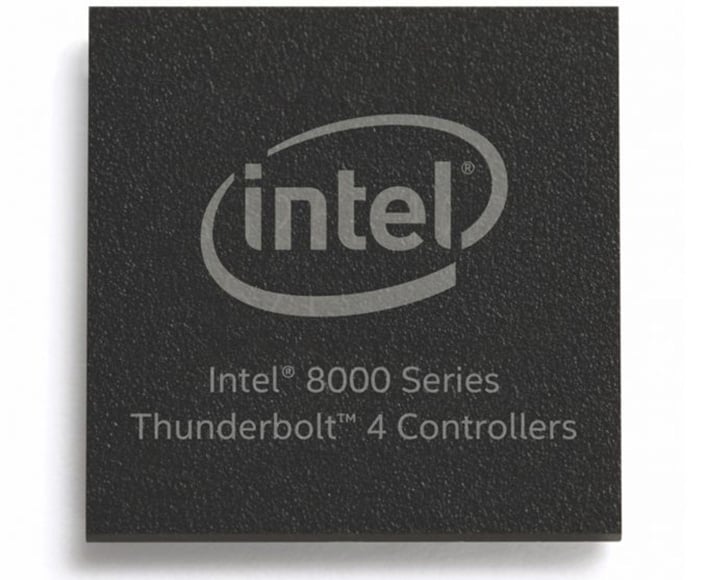 As an added benefit, Thunderbolt 4 will for the first time ever will offer docks with up to four Thunderbolt ports and universal cables up to 2 meters in length.
To go along with the updated specification, Intel is rolling out 8000 series Thunderbolt 4 controllers, including JHL8540 and JHL8340 for computer makers, and a JHL8440 device controller for accessory makers. It has also made developer kits and certification testing available for developers, to ensure a smooth roll out later this year.
Interestingly, one of the requirements for Thunderbolt 4 is support for Intel VT-d based direct memory access (DMA). This seemingly leaves AMD on the sidelines, in regards to implementing Thunderbolt 4. However, Ziller told PCWorld that this does not necessarily mean Thunderbolt 4 is Intel only.
"If there was an equivalent technology [at AMD] that supports DMA protection, that supports prevention against physical attacks, then that would be the requirement," Ziller said.
AMD also provided a comment on the matter, saying "there's no technical reason preventing from supporting Thunderbolt," but that it doesn't see much demand from OEMs to implement it. So, we'll have to see how that plays out.