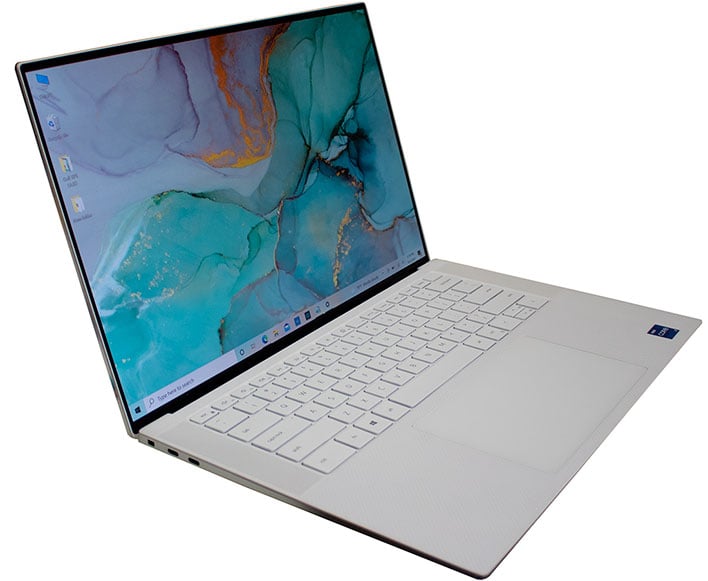 The latest version of Dell's XPS 15 (9510) is not a drastic departure from last year's model (9500). In terms of the physical design it is actually no different at all, which is not a bad thing. Last year saw Dell tweak the XPS 15's composition with a handful of subtle refinements, like slimming down the bezels on the InfinityEdge display and endowing it with a much bigger touchpad. The culmination of those and other small changes was a polished laptop inside and out, and the same can be said for this year's revision -- except it's faster.
That is to say, Dell retained everything we liked about last year's model and injected it with upgraded hardware for this year's refresh. It also added a gorgeous OLED display option, so while the shell may not look any different, the part of the laptop you will spend most of your timing looking at—the screen—is more vibrant, if you opt for the OLED upgrade at least. That is what we have in for review with us today... 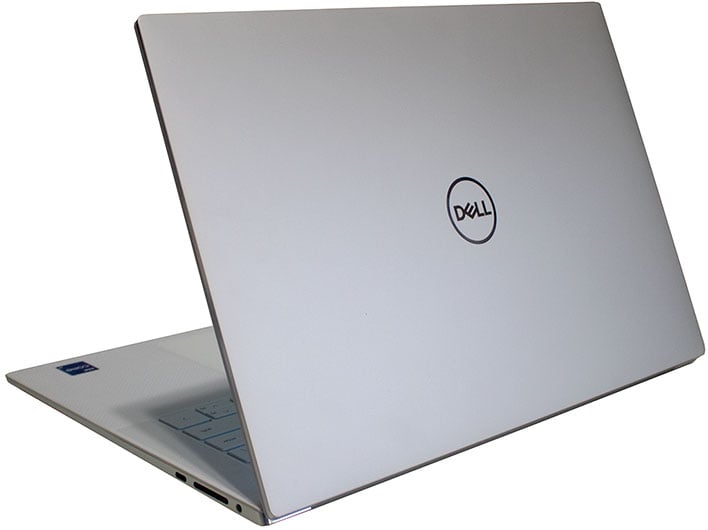 The configuration we received is kitted out with high-end amenities, and priced accordingly at just north of $2,400. There are cheaper configurations available, however, starting at around $1,274. And of course Dell is notorious for frequently dropping promo codes and discounts, so you can sometimes bag yourself a bargain. As of this writing, however, those are the starting and as-configured price points.
This year's model sees the XPS 15 make a splash into Tiger Lake-H waters, Intel's most recent mobile architecture (until Alder Lake wades into mobile sometime next year). There are three processor options: Core i5-11400H, Core i7-11800H, and Core i9-11900H. Our sample came with the middle SKU, a spunky 8-core/16-thread workhorse clocked at 2.3GHz to 4.6GHz, bolstered by 24MB of L3 cache.
For RAM and storage, our unit arrived with 16GB of dual-channel DDR4-3200 memory and a 512GB NVMe solid state drive, representative of a well-rounded configuration. As we were going to press, Dell informed us it added a beefy 8TB storage option, twice the amount as the original max (4TB), served up by way of two 4TB SSDs. It's an expensive upgrade—going from 512GB to 8TB pushed the price to $4,311.99—but it's there for creators and enthusiasts who might need or want oodles of fast storage.
Our unit also shipped with a mobile NVIDIA GeForce RTX 3050 Ti mobile GPU. This is the best discrete GPU option Dell has to offer on the XPS 15 lineup, the other two being a regular (read: non-Ti) GeForce RTX 3050, and integrated graphics.
NVIDIA allows OEMs to configure its mobile GPUs within a certain power envelope (35W to 80W) and boost clocks (1,035MHz to 1,695MHz). In this case, Dell went with a 45W configuration, with a 1,223MHz boost clock. It's also leveraging Dynamic Boost, to provide a little more wattage (55W) and speed (we saw the GPU peak at around 1,370MHz), when headroom is available. 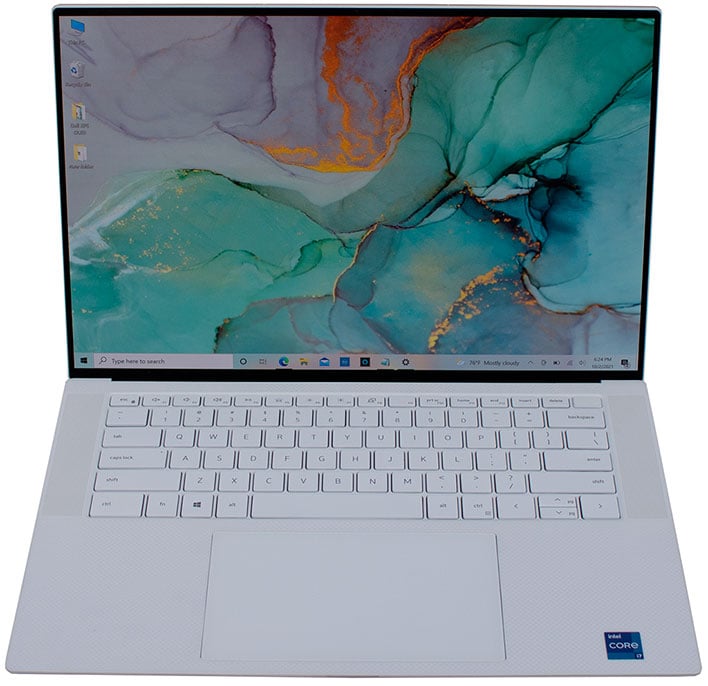 Beyond the internal hardware, the most noticeable upgrade is on the outside, that being the OLED display option. It has a 3.5K (3465x2160) resolution, touch support, and 400 nits of brightness. There's also an LCD with a UHD+ (3840x2400) resolution, also with touch support and a bit more brightness, at 500 nits. We received the former. Alternatively, the baseline option is an LCD touchscreen with a 1920x1200 resolution.
We received the 3.5K OLED screen and measured brightness at between 550-585 lux with our light meter. It is punchy and vibrant, as you would expect from an OLED display, and delivers the kind of inky blacks that are just not matched on an LCD. That's the nature of OLED, where the self-emissive pixels can turn themselves off rather than rely on backlight adjustments. Touch support is icing on the cake, though this is not a 2-in-1 system, so it may go unused by some. 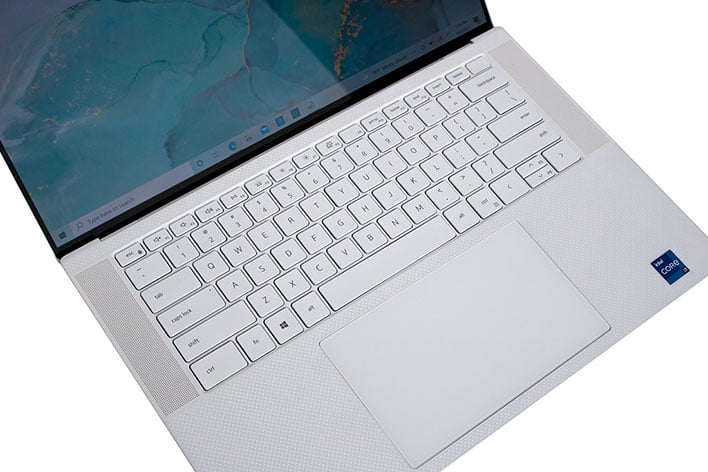 The XPS 15 interior color option we received has an 'Arctic White' interior. Beauty is obviously in the eye of the beholder, but to our eyes, the clean white appearance is a great pairing with the OLED screen, it just may require more frequent wipe downs to prevent dust and other debris from mucking up its pristine appearance (probably save that bag of Cheetos for when you're done using this laptop).
Typing on the keyboard is as we remember it from last year's model. It's a full-size deck with good spacing overall, and a white LED backlight to illuminate the keys if needed. While LEDs on white keys has a tendency to blend together and that is the case here, though it's still serviceable for typing in low light conditions.
There's 1.4mm of key travel, and the keys are snappy enough for a low profile keyboard. It's just not as comfortable as typing on an external plank, or the rare few laptop models that incorporate mechanical key switches into the design. Maybe we'll see that as an option on next year's variant.
The trackpad is a different story. It is delightfully ginormous, and as we commented on last year's model, once you get used to a large trackpad like this, you won't want to settle for anything smaller. The glass Precision design is a definite cut above the typical trackpad, and we had no issues getting taps, button presses (from the integrated buttons), and gestures to consistently register our desired input. 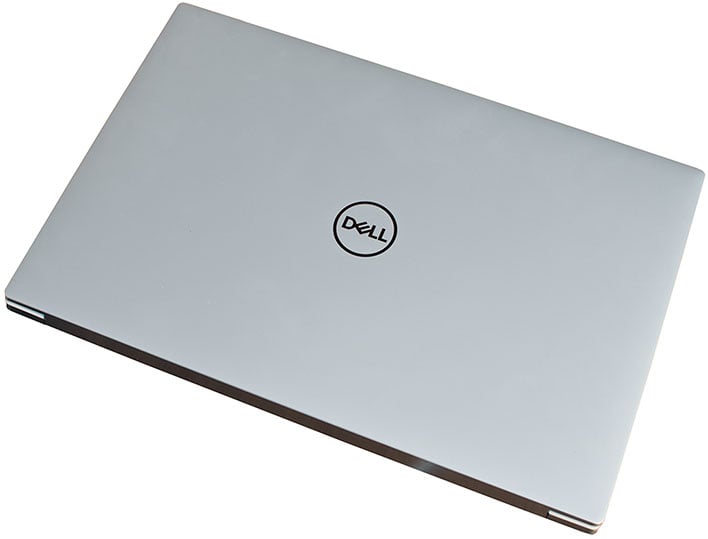 Dell calls this color option on the exterior 'Frost', which as it sounds is a little more frosty than the 'Platinum Silver' alternative. It's the same chassis, which is still precision crafted from CNC machined aluminum. And it is still thin and light, measuring 13.57 by 9.06. x 0.71 inches, and weighing around 3.99 pounds.
It also retains the twin-coil press-fit hinge design from last year's model, which Dell says makes it easier to open and reduces the cut-out at the bottom of the palm rest. We never found the XPS 15 to be particularly difficult to open, but hey, it still feels sturdy so we'll take it.

What is slightly different this time around, however, is the inclusion of Thunderbolt 4. There are two Thunderbolt 4 (USB Type-C) ports on the left, both with power delivery, and also a wedge-shaped lock slot. Over on the right, there's a USB 3.2 Gen 2 Type-C port (DisplayPort + power delivery), a full-size SD card reader (v6.0), and a 3.5mm headphone/microphone jack.
Where's the USB Type-A connectivity? Not here, at least not natively. However, Dell does thoughtfully include a USB Type-C to USB Type-A dongle in the box, which also has an HDMI port. Some companies that shall remain Apple would seize on the opportunity to make this a pricey accessory that must be purchased separately, so hat tip to Dell for bundling it. 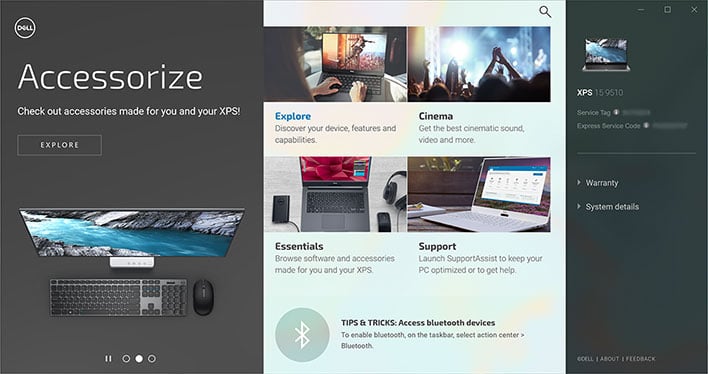 There are a few software bits included with the XPS 15 OLED. The most convenient is My Dell (once you get passed the annoying ads), which is basically a support dashboard with information about your laptop's details and warranty, and links to various other installed utilities. One of them is SupportAssist, a multi-purpose utility that fetches drivers and downloads specific to your laptop configuration, scans the hardware to look for issues, cleans up files, and so forth. 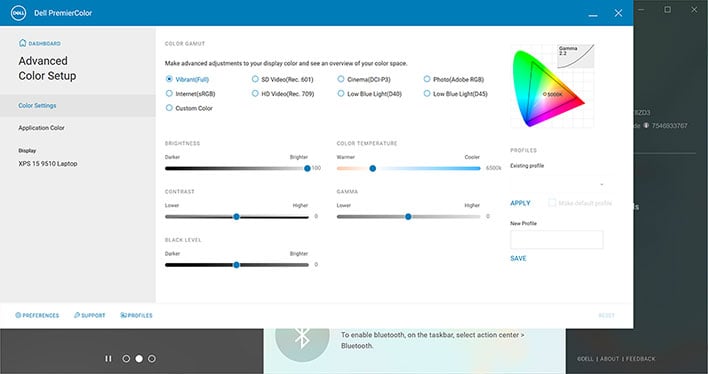 The other handy utility is Dell PremierColor, especially for photo and video editors. This allows you to tune and calibrate the display with adjustments not just to brightness, but also contrast, black level, color temperature, and gamma. And if you own a compatible colorimeter (Portrait Display C6 or X-Rite i1DisplayPro), there's a calibration wizard you can run through. 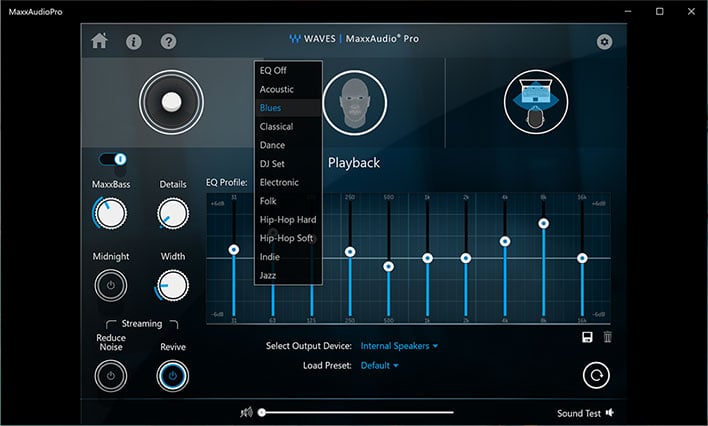 There is audio tuning software included too, which allows you to select from various EQ presets. Or you can manually tweak the sound to your liking. A pair of 1.5W tweeters and a 2.5W woofer combine to deliver audio that is certainly loud enough to fill a room. It's not quite full bodied, in that like almost all laptops, the profile trends on the tinny side. There is a bass adjustment, though. We found it sounded best when turning the dial about halfway to 50ish.
The built-in speakers are never going to pound your chest, but with some fiddling around, the sound quality is better than average (serviceable, at least), and plenty loud.