In early January, Intel officially announced its Tiger Lake-H mobile platform. For those that missed it, Tiger Lake-H is the foundation of the 11th Gen H-Series mobile processors. Like mainstream 11th Gen mobile processors, Tiger Lake-H is based on the 10nm Tiger Lake architecture, but Intel upped the ante with the H-series in terms of performance and features, and also pushed the form factor envelope. In addition to traditional gaming notebook form factors, Intel boasted that the new 11th Gen Core H-Series Tiger Lake-H processors would appear in high-performance gaming laptops as thin as 16.4mm, alongside the latest discrete GeForce RTX 30-series graphics solutions from NVIDIA. 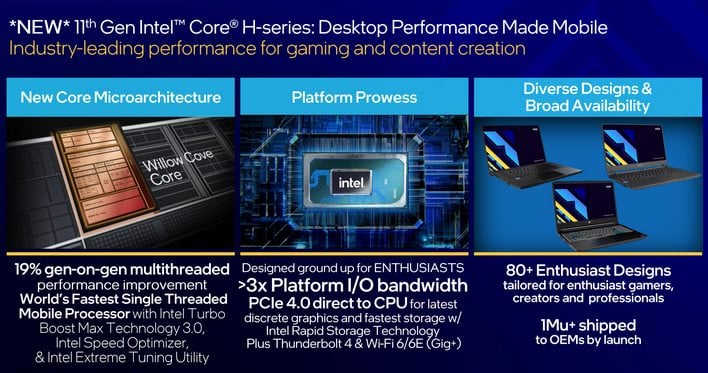 The early Tiger Lake-H announcement was comprised of H35 processors, spearheaded by the Intel Core i7-11375H Special Edition. The Core i7-11375H SE is a 35W quad-core processor (8-threads), with turbo clocks of up to 5GHz and support for PCI Express 4.0. That chip is specifically targeted for ultraportable gaming notebooks. Today, however, Intel is refreshing the lineup with higher-power and higher-performance Tiger Lake-H45 processors, with up to 8 physical cores (16 threads).

Versus its 10th Gen H-series processors, which are widely used in many of today’s top-end gaming notebooks, Tiger Lake-H offers significant single-threaded performance improvements and an approximate 19% improvement in multi-threaded workloads, despite having a similar number of cores. Tiger Lake-H processors also support DDR4 speeds up to 3200MHz and feature higher-performing Xe-graphics engines, but most of the notebooks featuring the Tiger Lake-H45s will be paired to discrete graphics solutions.

The platform also features all of the latest IO and connectivity technologies, like Killer Wi-Fi 6 / 6E, Thunderbolt 4, and support for Resizable BAR as well, thanks to Intel’s collaboration with NVIDIA. In addition to the aforementioned platform benefits, Tiger Lake-H processors also feature 20 reconfigurable PCI Express 4.0 lanes attached directly to the processor. Those lanes can be configured in a number of ways, e.g. x16 / x4 or x8 / x4 / x4 / x4. The latter configuration is interesting because it offers plenty of bandwidth for a discrete GPU, while also enabling PCIe 4.0 NVMe RAID, which is a first for any mobile platform. Up to 24 additional Gen 3 PCI Express lanes will also be available through the PCH. 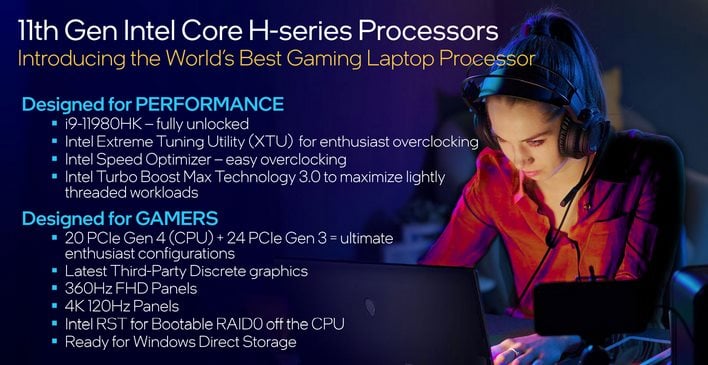 There are an array of consumer and commercial Tiger Lake-H based 11th Gen Intel Core H-series processors coming down the pipeline. The top-end consumer SKU is the Core i9-11980HK. The Core i9-11980HK is an 8-core / 16-thread processor, with a base clock of 2.6GHz and maximum turbo clock of 5GHz on one or two cores. What also makes this particular processor interesting is that it is fully unlocked and overclockable via Intel’s XTU utility.

The rest of the Intel 11th Gen Core H-series lineup is outlined in the tables above. The lowest end of the processors – the Core i5-11260H -- features 6-cores / 12-threads and as you work your way up the stack, core/thread counts increase, along with base and turbo boost clocks, culminating in the top-end Core i9-11980HK.

The core counts in the Tiger Lake-H-based commercial CPU lineup are similar, with similar clocks for the highest-end models as well. Some of these processors, however, carry Xeon branding, and they’ll target professional mobile workstations. In addition to the branding differences, the commercial CPU line-up features support for Intel SIPP (Stable IT Platform Program) and Intel vPRO and Intel TXT (Trusted Execution Technology) technologies. 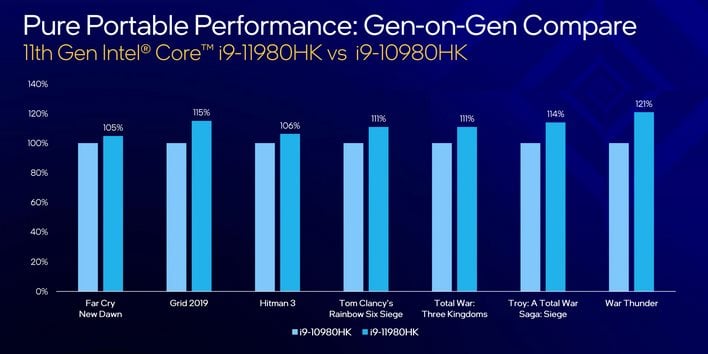 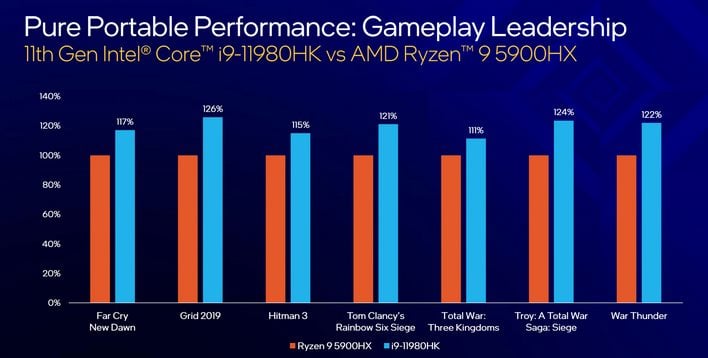 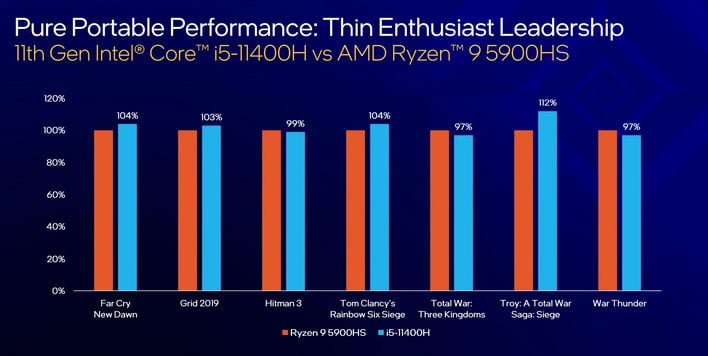 In terms of performance, Intel has released a handful of comparisons, versus older 10th Gen Core processors and AMD’s latest 5000-series mobile processors. Versus equivalent 10th Gen Core H processors, the new 11th Gen Core H series offers significant improvements across an array of games. Using the same titles in a similar comparison to the Ryzen 9 5900HX shows even larger leads for the new 11th Gen Core H series. Intel is even claiming that superior single-thread performance, in conjunction with all of the platform enhancements, allows the Core i5-11400H to outrun an AMD Ryzen 9 5900HS in many games as well.

We hope to have our hands on an 11th Gen Core i9-11980HK-powered notebook soon, to conduct some testing of our own. In the meantime, the updated platform, with class-leading IO, and the latest CPU core technology from Intel, seems to be a compelling upgrade over the previous-gen, that not only offers improved performance, but an array of new features as well.