On GeForce RTX graphics cards, Death Stranding supports NVIDIA's DLSS 2.0 AI-assisted temporal anti-aliasing method. To get a feel for how it looks, we'll examine two scenes with high-contrast colors up close, since this is where aliasing is most apparent without anti-aliasing enabled. 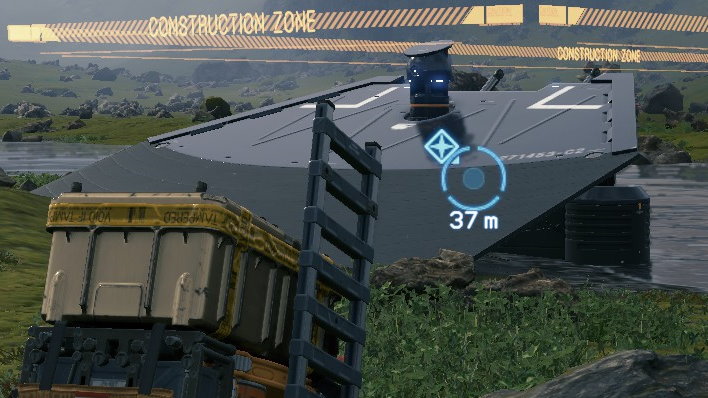 No anti-aliasing, just the raw image at our display's native 1440p resolution

This is a 100% crop of the image, so we're looking at exactly what the game produces. Without anti-aliasing, the edges of this construction site are pretty jagged, even at 2560x1440. The containers mounted on Sam's back also have a fair amount of jagged details. Overall, the output looks about like you'd expect at a high resolution without any anti-aliasing. Where a GeForce GTX or Radeon graphics card doesn't support DLSS 2.0, TXAA and FXAA can clean it up somewhat, but let's see what NVIDIA's deep learning tech can do.


With DLSS in Performance mode, all the jagged features are cleaned up, but the overall image is a bit soft. Remember, DLSS 2.0's Performance setting produces an image at just 1280x720 when we're playing at 1440p, so some of the detail can be lost. However, if you want to play at 4K and the only graphics card available is a GeForce RTX 2060, this might be your only option. Look at the "CONSTRUCTION ZONE" label above the site, and how soft that text is. Overall, there are trade offs, and this is more a matter of taste and how much the performance improves, which we'll examine soon. Now let's turn up the DLSS quality.


In Quality mode, DLSS is significantly more sharp than the Performance setting, while also completely eliminating the jagged edges. In Quality mode, DLSS 2.0 uses half the game's output resolution, which means 1706x960 is upscaled to 2560x1440. Without knowing that (and doing the math ourselves), we think you could easily be fooled into believing this is just native output with anti-aliasing enabled. Most of the sharpness of the native image returns without any of the jagged lines. We can also crank the image up to 4K and do the same thing, however, so let's do  that in another scene.


Here's another high-contrast image cropped at 100% to get a look at how this Bridges waystation looks without anti-aliasing. Again, the edge of the wall is just jagged, even at 4K. On our big 55" TCL TV it's awfully hard to see these jaggies from 12 feet, but if you've got a larger display or sit much closer, these may start to become apparent. Also, at a native 4K resolution, performance takes a big hit—the game is playable on our GeForce RTX 2060 SUPER, but it couldn't lock in at 60 fps.


At 4K UHD, the resolution drops down to 2560x1440, which is half the pixels of a 3840x2160 display, and then the AI-infused juice upscales that image back to 2160p and applies anti-aliasing. Just like before, all the jaggedness is gone and the sharpness is mostly retained. DLSS 2.0 in the Quality setting was by far our preferred method for playing Death Stranding, just because we prefer the anti-aliasing and don't mind a slight loss of sharpness. By the way, that slight reduction of sharpness is inherent in any anti-aliasing method—the whole point of AA is taking some of the sharp jagged edges out of the image to make it more pleasing to the eye, after all.

Now that we've seen how DLSS 2.0 looks, let's see how the game performs. Our test machine has a Ryzen 7 3700X processor with 32 GB of DDR4-3200 memory and one of three different graphics cards: GeForce RTX 2060 SUPER, GeForce RTX 2080 SUPER, and Radeon RX 5700 XT. Windows 10 with the 2004 update and Death Stranding were both installed to the same Sabrent Rocket 4.0 NVMe SSD. The match-up to watch in these performance charts is the 5700 XT against the 2060 SUPER, since they tend to be priced in roughly the same $400 price bracket. 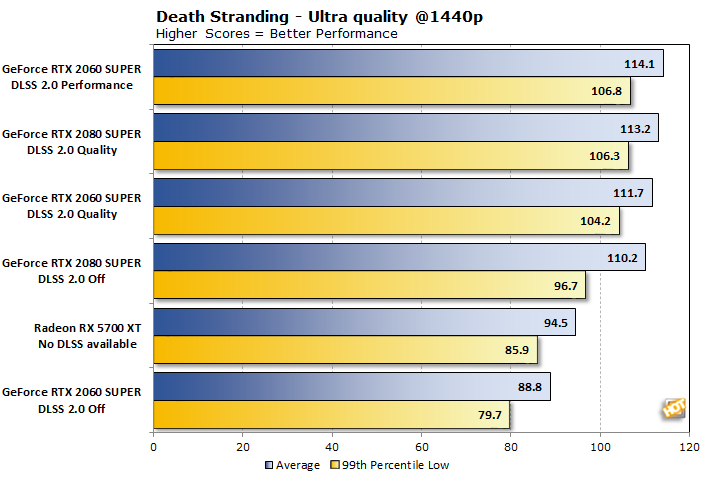 At 1440p, we seem to have hit a CPU wall at around 110 to 115 frames per second. That was more than enough to saturate the 95 Hz frame rate of our Pixio 275h gaming monitor, but wouldn't quite be enough to drive 144 Hz displays at full speed. At any rate, the 99th percentile indicates that the game is pretty darn smooth on any of these cards, as none of them dipped below right around 80 fps across the board, without any DLSS.

Without DLSS 2.0 to aid the RTX 2060 SUPER, the biggest current Navi card, the Radeon RX 5700 XT, is around 8% faster than the slower GeForce. We don't really get a good feeling for the ceiling on the GeForce RTX 2080 SUPER, however, since we seem to be going as fast as our Ryzen CPU's legs will carry us. Even DLSS 2.0 in Performance mode running at 1280x720 isn't able to separate itself from the higher Quality mode. Let's turn the screws a bit and punish our cards with the higher 4K resolution. 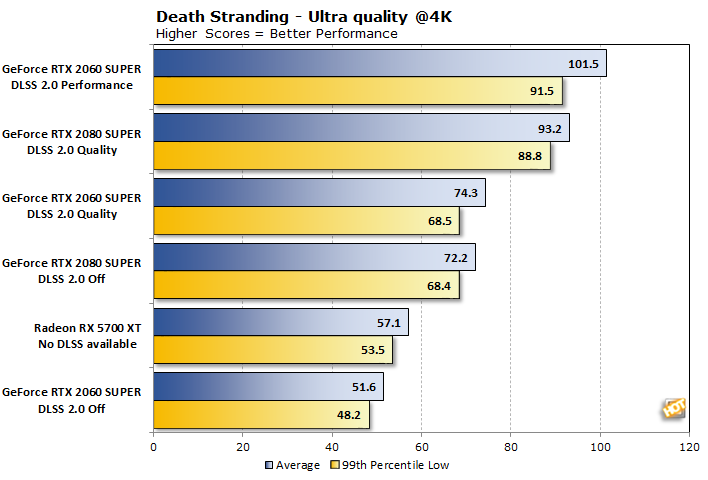 At 3840x2160, there's clear separation between our graphics cards. The Radeon RX 5700 XT was able to extend its lead over the GeForce RTX 2060 SUPER to just over 10%, and the 99th percentile frame rates are still pretty close to their averages. However, once DLSS 2.0 comes into play, the GeForce RTX 2060 SUPER can edge out even the mighty GeForce RTX 2080 SUPER's native performance. We only tested the DLSS 2.0 Performance setting on the weaker Turing card, and it was able to drive 2160p at nearly twice the frame rate of native, and came surprisingly close to the 100+ frame rate limit we bumped against at the lower resolution.

But wait, there's more! We already know from review after review that high average frame rates are important, but of equal (or even greater, I'd argue) importance is the latency from frame to frame. For that, we have our customary frame time graphs. As usual, the most important thing to watch for is a big spike on the chart. Low frame times equate to high frame rates and a relative instantaneous feel to every control movement, so if a frame takes a while to load, we'll feel it.

For these charts, we kept Death Stranding at its maximum settings, and selected a resolution of 2560x1440, since that was the resolution where every card was at least capable of driving 60+ frames per second for the best experience. We also kept the same scale across charts for exactly 90 seconds of gameplay, so it's easy to compare how each card did. The more frames the card renders, the higher the frame rate is. 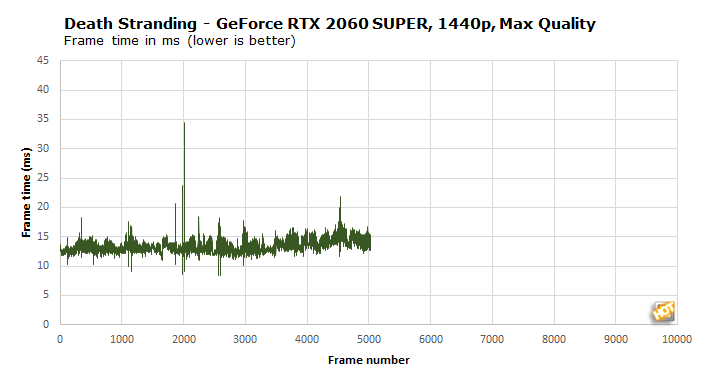 We started with the GeForce RTX 2060 SUPER. At 1440p it could drive nearly 90 fps across our entire three minute run, and when we examine the first 90 seconds, we can see that frame times are pretty consistent between 10 and 15 milliseconds. There are a couple of frames that take longer than 20 milliseconds to render, but even the worst offender at 34.5 milliseconds is still right near an instantaneous frame rate of 30 fps. We never felt that hiccup, and we don't think most folks would, either. Note that this is the same resolution Death Stranding runs at when DLSS 2.0 is enabled at the Quality setting with a resolution of 3840x2160, so it's also representative of how the game runs at 4K when DLSS is enabled. 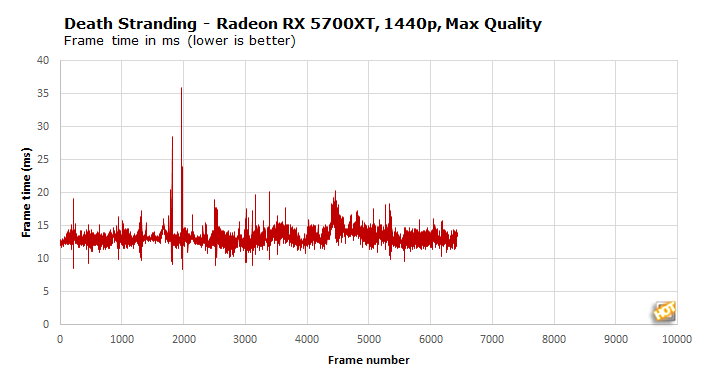 Overall, the Radeon RX 5700 XT posted somewhat higher frame rates for slightly lower frame times. Once again, there are just a couple of slightly higher frames, but these are relatively low peaks. The instantaneous fps only once dipped below 30 fps and almost always maintaining a very smooth 60 fps across the board. Again, we characterize this performance as excellent overall, and eminently playable. The only letdown is that we couldn't get this kind of performance via DLSS 2.0 anti-aliasing, since Radeon GPUs don't support it. It does, however, get an overall faster average frame rate for the same $400 price point as the GeForce RTX 2060 SUPER. 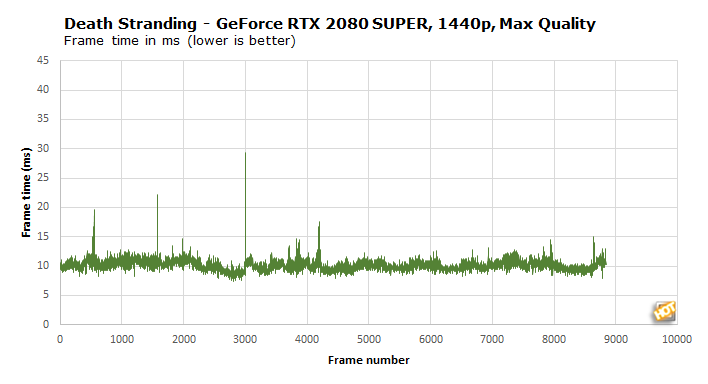 The GeForce RTX 2080 SUPER left the two more affordable options in the dust—as well it should, considering its $700 price tag. Frame times hardly even approached 16 milliseconds throughout, and only 12 total frames over the course of 90 seconds eclipsed that mark. That means that only 0.12% of all frames rendered slower than 60 fps. That's buttery smooth across the board. Just like the RTX 2060 SUPER, this is representative of how the game plays at 4K with DLSS 2.0 enabled, too.

While our time with Death Stranding has been limited so far, the game has its hooks in us. Death Stranding was originally supposed to be a Silent Hill sequel, but when Hideo Kojima parted ways with Konami, it took on a life of its own. The famed designer's previous games have always been a touch mysterious, but this game is off the charts with all the wild ideas and unexplained events. Fortunately, we could just put all of that in context, even if questions remain, by playing through the game's story. And there's a lot of story and exposition to experience—perhaps a bit too much.

The game play is a little uneven, and how Sam became a "legend" among couriers when he falls over like a drunk uncle ruining a wedding reception is a little beyond me. Fortunately, once we build up his stats, he's more stable while carrying a heavy load. The controls fall down quite a bit if you play with a keyboard and a mouse. Some of the button commands are awkward to hit while moving, especially combat controls. I was so used to attacking with mouse buttons that MULE's would punch me and I'd just grab the straps of my backpack harder, because that's where those functions are mapped. You can sidestep all this nonsense by using an Xbox controller.

While the execution of Death Stranding's altruistic and unifying game play isn't perfect, we can really see a game as art, that tries to extend past the medium and affect the way we think in the real world. For that, Kojima Productions should be lauded. This is an instance where a game attempts to—and mostly succeeds at—transcending the medium and becoming a work of art. As with any artful medium, beauty is in the eye of the beholder, but we were emotionally invested throughout our time with the game.

PC fans can rejoice, however, at just how well Death Stranding runs on our platform of choice. The system requirements for resolutions up to 1080p are low enough that just about any $550 entry-level gaming PC today can hit it. Systems with more oomph can soar even higher, all the way up to 4K native resolution with the fastest graphics cards and sufficient CPU resources. Those high frame rates aren't just for show, either; the consistent smooth performance we experienced across the board made playing the game and escaping into a post-apocalyptic wasteland a pleasure. It also takes advantage of any GPU platform. NVIDIA's DLSS 2.0 puts on a nice show, and 505 even put AMD's FidelityFX CAS sharpening tech to work.

Overall, the Death Stranding PC port gets high marks. The story is engaging, the technology is solid, and the game runs well on just about everything. If you missed it on the PS4, or even if you didn't and just want to revisit, experiencing it on PC is a fun and gorgeous way to play.