Get ready to add another 3DMark benchmark test to your arsenal. UL Benchmarks, the developer behind the popular 3DMark suite (as well as PCMark and others), announced it is bringing a new Speed Way benchmark to the 3DMark track so you can redline and test the lap time of your turbocharged DirectX 12 Ultimate gaming PC.
UL Benchmarks shared a couple of unfinished screenshots, including the one shown above. The "Legion" branding you see is not random or by coincidence. The developer partnered with Lenovo to exclusively feature its Legion gaming brand through with strategic product placements and detailed models in various parts of the benchmark scene.
Similar arrangements exist with Galaxy (Time Spy) and MSI (Fire Strike), so the branding play is not new by any stretch. That stuff aside, the Speed Way benchmark will stress your GPU's ray tracing and real-time global illumination capabilities with realistic lighting and reflections. While not mentioned, this means you'll need a graphics card with dedicated hardware for ray tracing to perform well in this test. 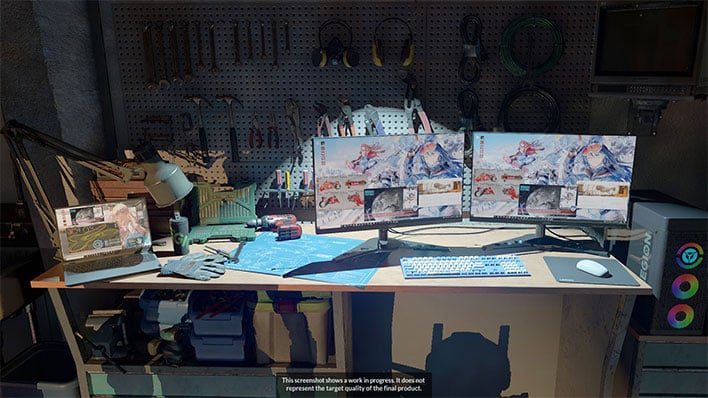 It also taps into a set of DirectX 12 Ultimate features, including mesh shaders and variable rate shading. Beyond those tidbits, we'll have to wait for the benchmark to release for more details. It will arrive sometime later this year and be available on Steam. It's not yet clear if owners of paid versions of 3DMark (like 3DMark Advanced) will get free access to the upcoming Speed Way test or if it will come with a small surcharge.
3DMark Advanced runs $29.99 on Steam, though it's not unusual to see it deeply discounted—we've see it go for less than $5. Ponying up for the Advanced versions unlocks a host of perks over the free version, such as finer grain control over benchmark settings, several additional tests (like a PCI Express feature test), and the ability to save results offline.