3DMark is a synthetic GPU benchmark for assessing graphics (GPU) and physics (CPU) performance. 3DMark supports both DX11 and DX12, depending on the particular test being run, which makes it handy for testing GPUs of various performance levels. We used the Time Spy benchmark, 3DMark's DirectX 12 test, to push the Alienware Aurora R11. This test has multiple presets, but the standard Time Spy test is fairly taxing and we have a plethora of reference data, so that's what we stuck with. 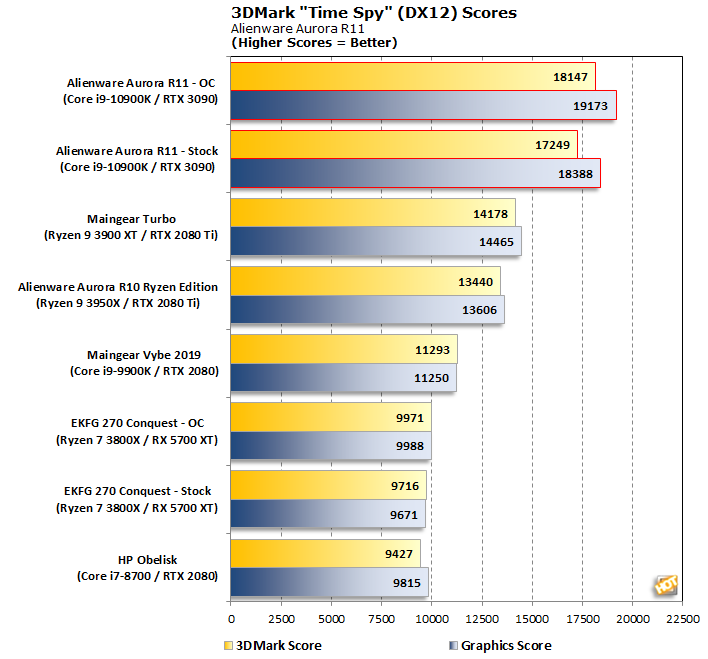 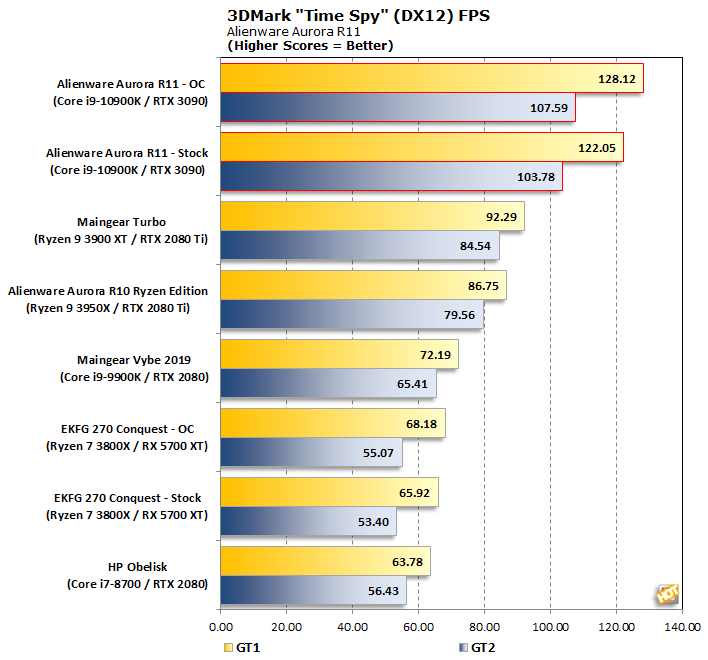 The Alienware Aurora R11 absolutely obliterates the other system's we've tested in Time Spy. While this is a synthetic benchmark, it shows the supremacy of Nvidia's GeForce RTX 3090 over every other card they have produced to date. This is also the first system to keep its head above the 100 FPS mark in both graphics subtests, even exceeding 120 FPS in GT1.

Now it's time to move on to our gaming tests. Playing the latest AAA games at high resolutions and detail settings is the main reason you'd look to buy this desktop in the first place. 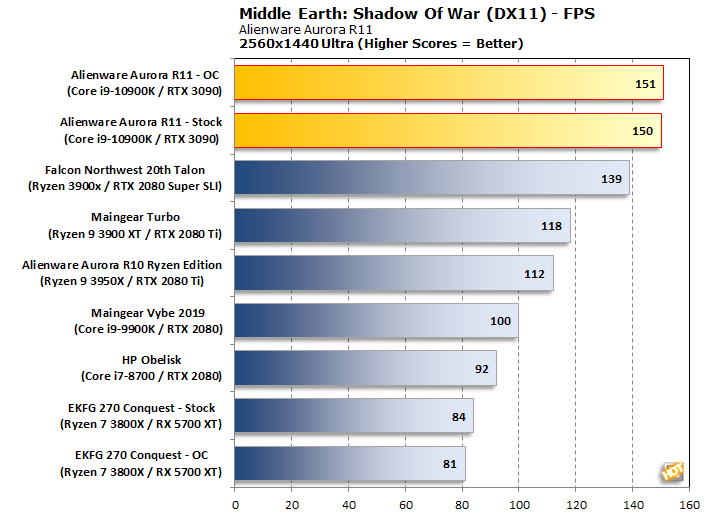 Even SLI'd GeForce RTX 2080s in the Falcon Northwest Talon are unable to compete with the monstrous RTX 3090 wielding Aurora R11. At 1440p, this system will make the most of a 144Hz display for a super fluid gaming experience.

We were not content to only run 1440p, however, so here's a sample of 4K numbers with the EKFG 270 Conquest for a reference point...

Even at 4K Ultra, the Aurora R11 is capable of churning out over 100 FPS in Shadow of War at Ultra settings. The RTX 3090 preserves about two-thirds of its framerate in the shift from 1440p to 4K while the RX 5700 XT in EK's system drops to just over half of its 1440p framerate. 4K has more than double the number of pixels as 1440p so typically we would expect to see closer to half the performance rather than two-thirds at 4K. This difference indicates the Aurora R11 has some level of CPU bottlenecking at 1440p which is opened up at 4K. 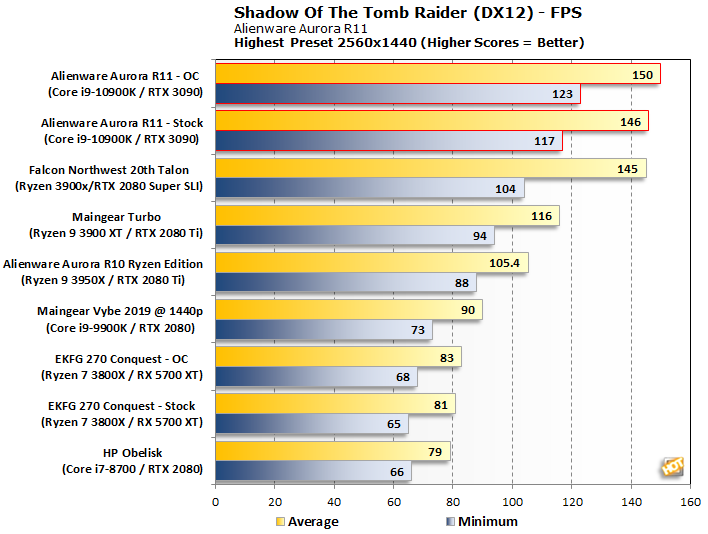 Shadow of the Tomb Raider's framerates are very similar to Shadow of War at 1440p. The SLI'd RTX 2080 Supers are closer to reaching the Aurora R11's GeForce RTX 3090 here, but the latter's minimum framerates are much stronger. So much stronger, in fact, that they exceed even the RTX 2080 Ti's average framerates. Once again, the Aurora R11 is delivering blistering and smooth 1440p numbers.

Since this is another title we only have comparison 1440p numbers for, we also took a sampling at 4K...

Shadow of the Tomb Raider places more load on the graphics pipeline at 4K than Shadow of War, though it is more in line with our expectations. This title does not appear to be CPU-bound at either resolution tested, which makes this a truer comparison of relative GPU muscle. Once again, the Alienware Aurora R11 is way out in front due to its much more powerful GPU. 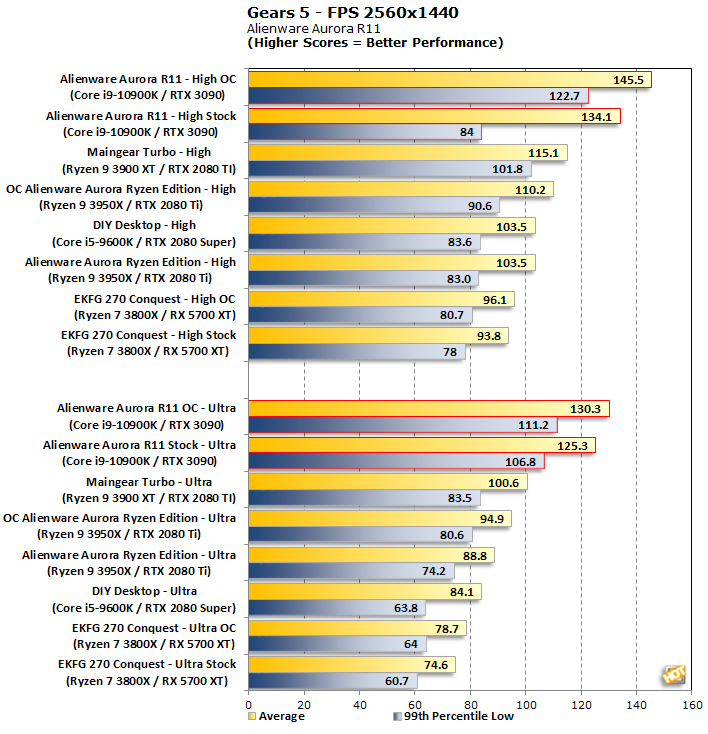 There are two sets of numbers here for all of the configurations, one set with the game configured for 'High' image quality settings and another with the game set to its 'Ultra' mode. Gears 5 is a little more demanding than the other titles at its highest visual fidelity, but that does little to slow down the mighty GeForce RTX 3090. There is an odd result with low minimum framerates at 1440p High using the Stock profile, though these results were very repeatable. We expect prospective buyers might be replicating our OC profile for use at any rate. 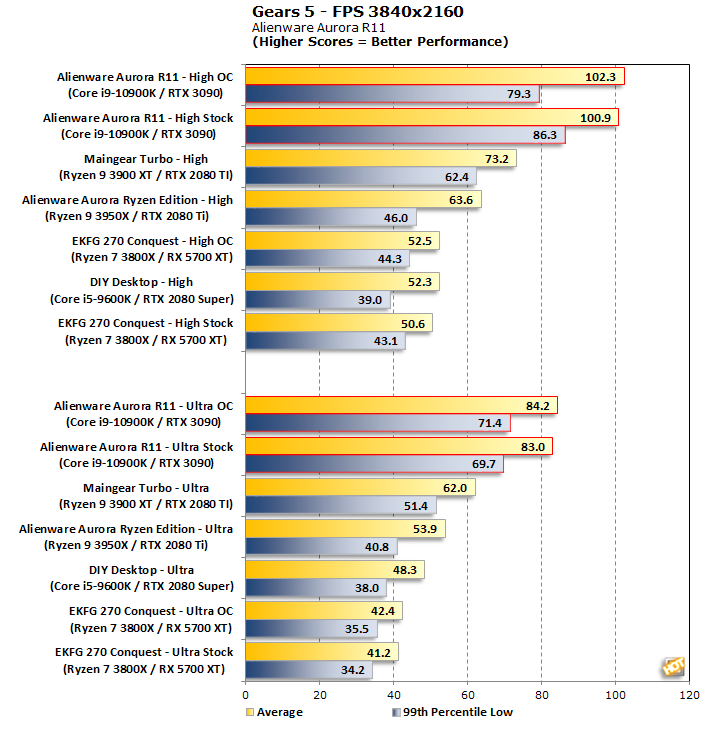 Moving up to 4K, we see the Aurora R11 maintain its framerates above 60 FPS in all cases. This is a first for systems we have tested in Gears 5, only previously attainable by the Maingear Turbo at High settings. The Aurora R11 delivers for gamers who want to immerse themselves in the intricate details of another world at the highest image fidelity. 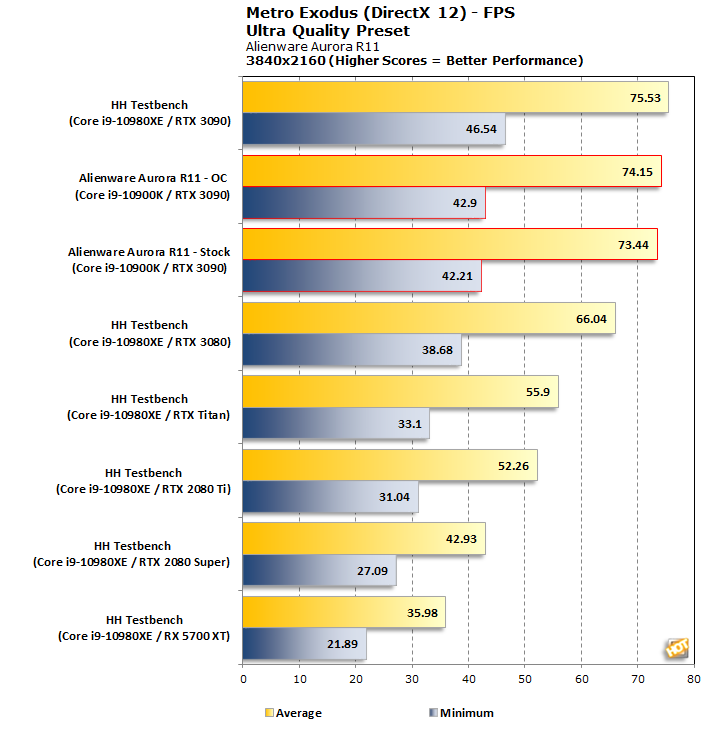 First, we ran Metro Exodus at 4K using the Ultra Quality preset. In this configuration, ray-tracing and DLSS are disabled for a "traditional" gaming experience. We only have our internal test bench numbers to compare to for this title, but it is enough to say that the Aurora R11's performance is in line with our expectations. Minimum framerates are perhaps a bit low which could be due to any number of factors. In particular, since the test bench numbers were taken, Nvidia has pushed stability fixes in their drivers that could be throttling back performance a touch. We can't forget too that the Aurora R11's RTX 3090 is much smaller in physical size than the reference Founder's Edition. 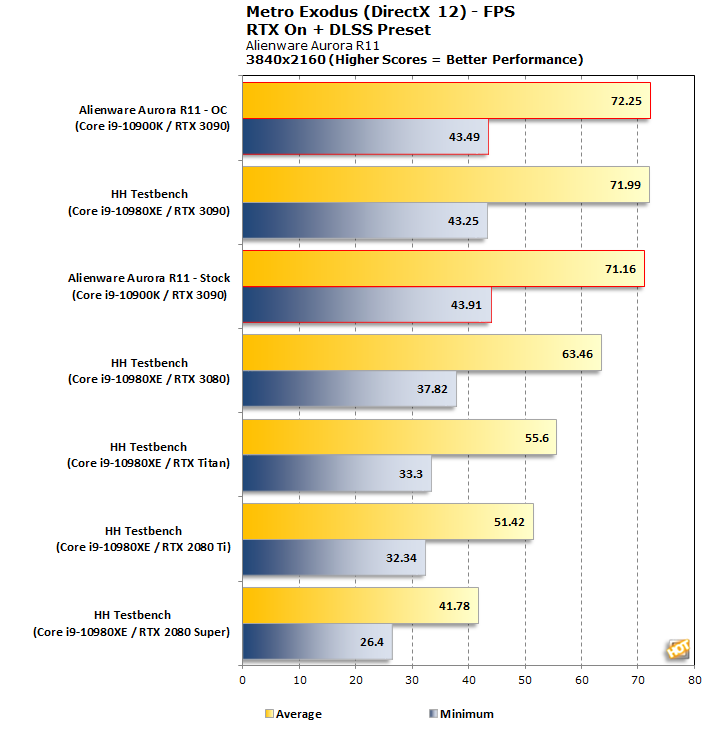 We also tested Metro using the RTX On + DLSS preset. This profile otherwise uses the same base settings from the Ultra Quality preset. Here, performance is virtually indistinguishable from the Founder's Edition RTX 3090 in our test bench. Here, DLSS 2.0, NVIDIA's latest iteration, effectively makes ray-tracing "free" compared to the RTX Off numbers. Whatever the case is, buyers will be very impressed with the Aurora R11's real-world performance in the system configuration we tested.
PREV PAGE NEXT PAGE