When we review systems, we typically stick to out of the box settings, as that is what most buyers will experience. In the case of the Aurora R11, however, these factory defaults may not reflect what you have paid for. For instance, our test system uses HyperX Fury DDR4 RAM capable of running at 3200MHz, but it arrives running at factory speeds of 2667MHz.


As a result, we will run all the benchmarks with two different performance profiles we are calling “Stock” and “OC.” Our Stock profile is exactly how the Aurora R11 was configured out of the box. This means in the Alienware Control Center (AWCC) application, any overclocking profiles are disabled and both Thermal and Power profiles are set to “Balanced.”


For our OC profile, we went into AWCC’s Fusion module and duplicated the OC1 profile. OC1 does not appear to do much on its own. It only applies to the CPU by default, but targets the same 5.3GHz single-thread max boost the Core i9-10900K is capable of regardless. We customize this profile by also applying the RAM2 profile to hit 3200MHz and adjusting the GPU Thermal Limit from 83°C to its maximum of 91°C. Finally, we set the Power profile to “High Performance” and Thermal profile to “Performance.”

AWCC offers additional options for users who really want to dial in their performance options. This can include GPU core clock and memory clock offsets. We did not adjust these because they can vary from unit to unit. Our review figures represent numbers that all buyers should expect to achieve and some may be able to dial in additional performance over and above what we did here.

To measure idle power consumption, we let the Alienware Aurora R11 boot to the Windows desktop and settle for a few minutes. Once the value on the Kill-A-Watt stabilized, we recorded that value as the idle consumption. The loaded figure represents perhaps a slightly unrealistic scenario in which the Aurora R11 was tasked with running both Prime95's Small FFT test and a 2560x1440 Furmark stress test simultaneously for 30 minutes. This desktop PC was plugged directly into our Kill-A-Watt for all measurements, so only its power draw is being measured here. 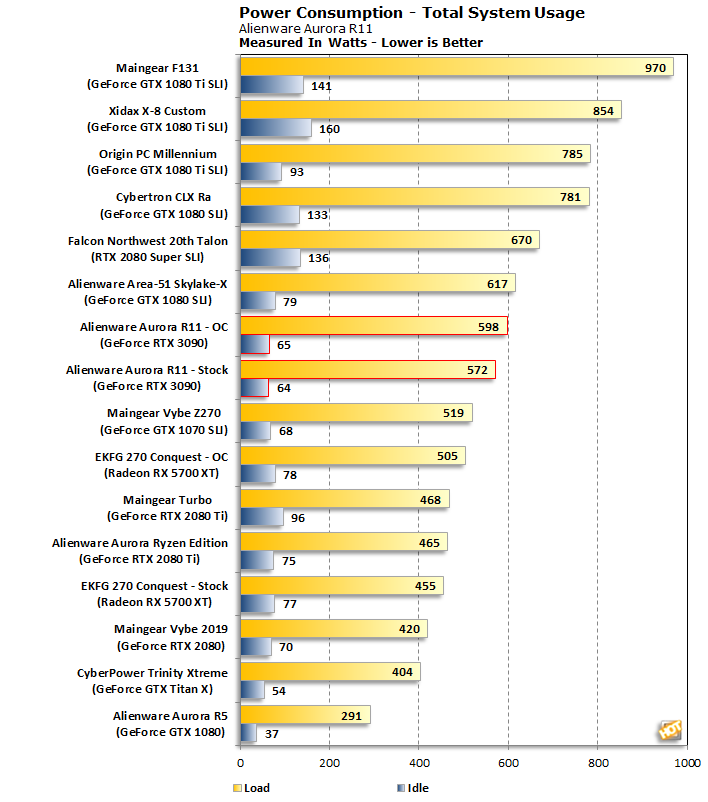 The Alienware Aurora R11 idles at a surprisingly reasonable 64-65 watts. Once under load, however, the system draws more power than any other single-card machine in our database. That is not surprising as the RTX 3090 Founder's Edition clocked a peak 430W of power draw as measured with Nvidia's PCAT device. Any way you slice it, an RTX 3090 equipped Aurora R11 has quite an appetite for electricity.

While under load, we also tracked the system’s thermals and acoustics. Below are the results for the system while stock and overclocked, per the configuration details mentioned above...


Temperatures are virtually identical between our Stock and OC profiles. The Core i9-10900K peaks at around 85°C and the GeForce RTX 3090 does not exceed 70°C. Temperatures are not the full story here, however. The CPU and GPU clock speeds both differ in the screenshots. In truth, the GPU clock frequency fluctuated enough throughout the test that we cannot really distinguish them. However, the OC profile's CPU frequency does steadily hold a couple hundred MHz edge over the stock state. This is likely due to the ramped up cooling with the Performance Thermal profile more than anything else. Most telling is the OC profile's higher average framerate at 192 FPS to the Stock profile's 186 FPS.


How much does the ramped up cooling affect acoustics? Well, using the Stock configuration, the Aurora R11 measured right around 47dB using our sound pressure level meter. The OC configuration generated moderately more noise, measuring in closer to 50dB. While noticeably louder, neither result is particularly offensive in regular use. Users can opt to reign in fan speeds as well with custom curves. Some long-duration intensive workloads may see throttling, but most typical usage should be unaffected.
PREV PAGE NEXT PAGE