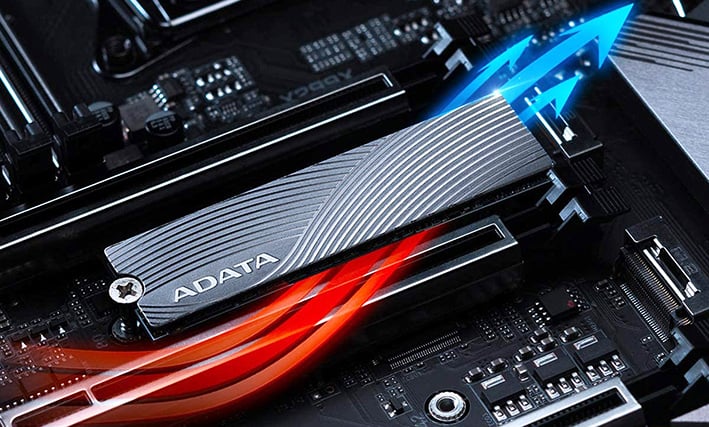 By now, everyone with even the vaguest of interest in PC technology can tell you how much snappier solid state drives are than even the fastest of spinning disks of yesteryear. There have been some interesting wrinkles recently, like ultra-high speed drives that ride the PCI Express 4.0 bus, but in test after test, regardless of drive type, just having a modern SSD offers enough of a boost to make an older PC feel new again. Similarly, it's basically a necessity to slap an SSD like one of the ADATA drives we'll be showing you here, into a new system build to not make any big sacrifices in responsiveness.

Today, we're going to look at a pair of 1 TB SSDs from ADATA: the Swordfish and the Falcon. Both of these drives are 2280 M.2 gumsticks that use four lanes of PCI Express 3.0 connectivity. ADATA's Swordfish is priced for the mainstream, roughly on par with similarly-sized SATA SSDs, but with specs that leave those 2.5" drives in its wake. The Falcon is a slightly pricier drive that -- again, in terms of its specifications -- will leave budget SSDs behind. Without further ado, let's take a look at our two contenders. 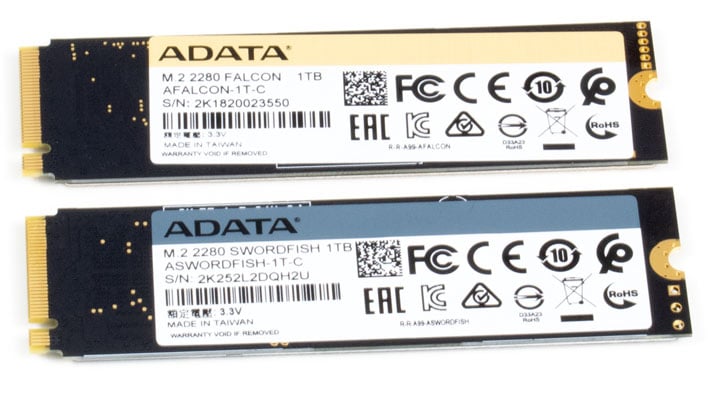 ADATA's Swordfish and Falcon are a pair of M.2 2280 NVMe SSDs with controllers we haven't experienced before. Both drives are powered by Realtek NVMe controllers. The Swordfish features the RTS5766DL, which is a quad-channel controller with no DRAM cache. This is about as budget as NVMe SSD controllers get, and the low starting price of the drive reflects that. Despite its entry-level status the RTS5766DL, and by extension the Swordfish, supports native hardware-accelerated AES-256 encryption and SLC caching for writes.

The Swordfish comes in three capacities: 250 GB, 500 GB, or 1,000 GB (listed as 1 TB), though their formatted capacities are somewhat smaller. Our 1 TB model had 931 GB free after formatting, which is typical for drives in this capacity. The drive is pretty budget-conscious, too—the 250 GB model will set you back just $40 on Amazon, while the 500 GB is $65 and the 1 TB drive is just $115. This is right in line with some of the best premium SATA drives like the recently-reviewed Samsung SSD 870 QVO, but it should enjoy a nice performance advantage over any SATA drive due to the inherent advantages of the NVMe interface.

As we mentioned, ADATA's Falcon also has a Realtek controller, but this drive features the somewhat more upscale RTS5762DL. This controller supports eight channels and should therefore have much faster throughput, as the Falcon's specifications table states. Again there's no DRAM cache, but just like the lower-priced drive, the Falcon supports AES-256 and SLC write cache. The same Micron 3D TLC NAND is found on this drive, too. 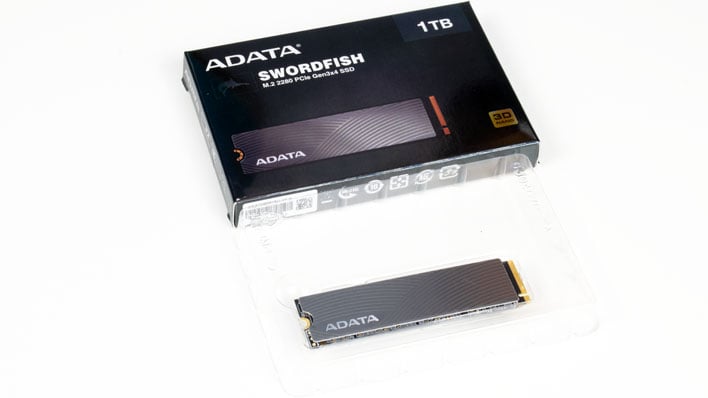 The Falcon comes in slightly higher capacities than the Swordfish: 256 GB, 512 GB, 1,024 GB (a full 1 TB), and 2 TB. Despite this difference, our 1 TB model also has 931 GB free when formatted, with a slightly larger over-provisioning reserve for cells as they wear out. That's partially why this drive has a higher total bytes written spec, 1.2 petabytes to the Swordfish's 960 terabytes. Despite its much faster speed ratings, the Falcon won't break the bank, running $69.99 for 512 GB, $129.99 for a 1 TB drive, or $239.99 for the 2 TB model. All of these prices are a few bucks under what the Addlink S70 normally commands, and that drive has very similar specs. For example, the 1 TB S70 typically goes for $140 online, or $10 more than the Falcon. 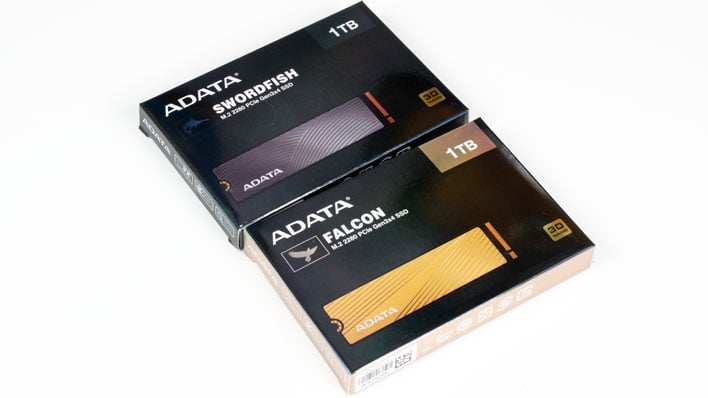 Both of these ADATA drives also feature thin metal heat spreaders, and they're not just for show. The Swordfish and Falcon both get pretty warm to the touch after being stressed, and the metal shield definitely helps dissipate heat. There's also a thin cellophane sheet on the heat spreader, which definitely needs to come off before installing the drive. Many mid-range or high-end motherboards, such as the ASUS motherboard in our test system, have integrated heat spreaders for NVMe drives, which seems redundant in this case, but should further aid in managing excess heat in the drives. 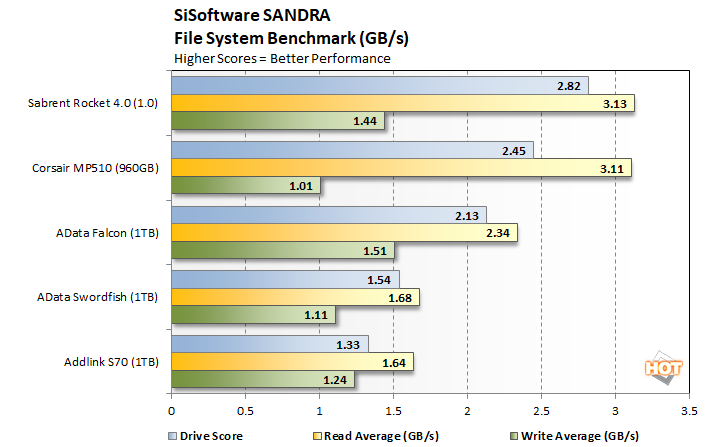 SANDRA reports three scores: read, write, and an overall value represented as GB per second. In our write tests, the Swordfish finds itself as expected towards the bottom of the pack but still above the Addlink S70. A single test in, however, and the value of an NVMe drive already proves itself with transfer speeds twice that of SATA drives. For a mere $15 more, however, the Falcon acquits itself nicely with an average performance boost of around one third in both the read and write averages versus its lower-priced sibling. 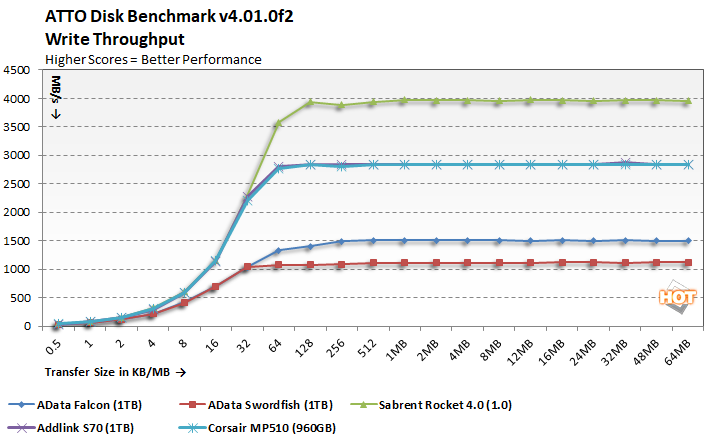 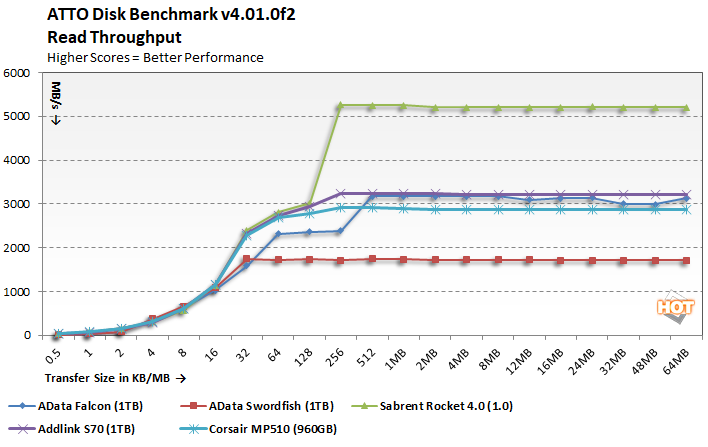 ATTO shows how each drive copes with transfers of varying sizes all the way up to 64 MB, where at this point the drive should pretty well be maxed out in terms of read and write speeds. If we ignore the premium-priced PCIe 4.0 Sabrent Rocket 4.0, we see that the speedy Falcon hits, and even slightly exceeds, its theoretical read and write specifications once the transfer size hits 512 kB and hangs in with the similarly priced Corsair and Addlink drives. It doesn't really set itself apart, but it's certainly a viable option. The Swordfish also hits its performance targets, but those targets are much lower so it brings up the rear. It also reaches its peak much more quickly, at a file size of 32 kB. At that low file size and smaller, the two ADATA drives perform equally, and just a touch behind the others in our test. 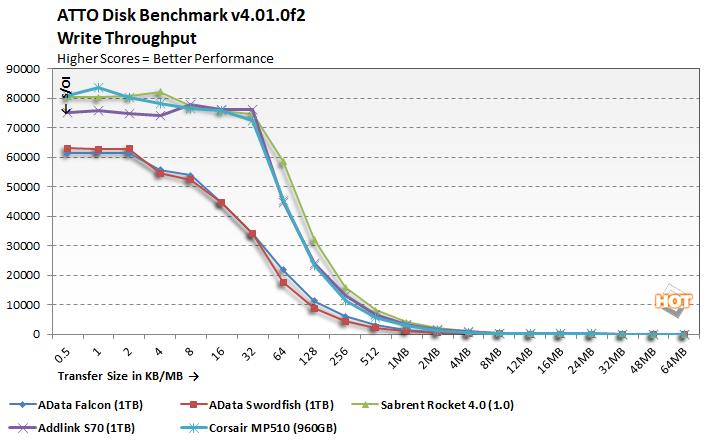 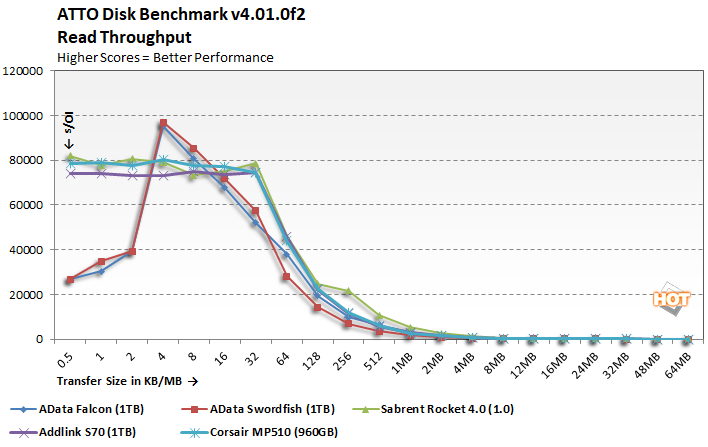 The bigger an input or output operation is, the longer it takes and therefore the entire right side of each I/O graph is completely expected. By the time we hit 8 MB, all of our drives have dropped low enough in I/O count to make it appear they've flatlined when in fact they are still transferring bigger blocks of data more infrequently. On the Write graph, the other unexpected behavior is that these drives from ADATA struggle mightily to keep up. If you flip back to our Samsung SSD 870 QVO review, those write figures more closely align to SATA drives than NVMe storage.

On the other hand, the very slow start both drives get off to is very unusual, but they do abnormally well at 4 kB transactions, too. The good news is that 4 kB is the cluster size on an NTFS-formatted drive. It seems that ADATA has tuned these drives for the best performance at the 4 kB block size, another behavior shared with SATA SSDs rather than other NVMe devices. 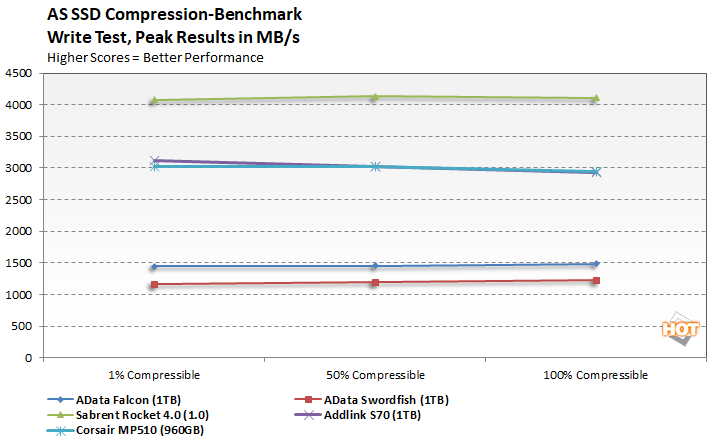 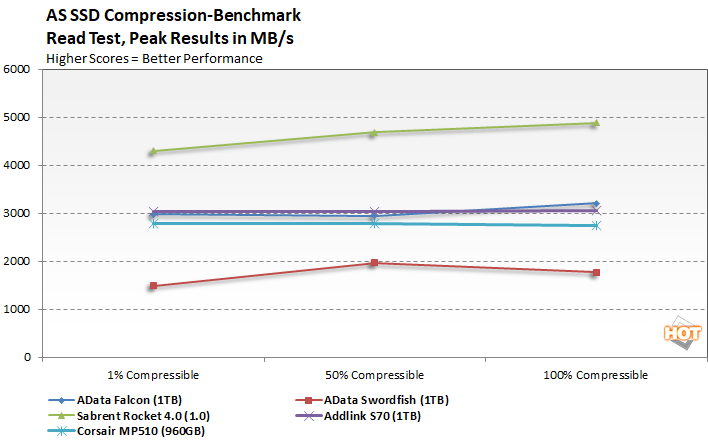 We see very subtle shifts throughout this test with most of our drives. In the write tests, all of our drives performed roughly the same across the duration of the test. How compressible the data is didn't seem to affect how quickly the drive reads it. The read tests were a little more interesting for the Swordfish, though. The Falcon didn't seem to be fazed, and held very closely to the Corsair MP510 and Addlink S70, as it has done in every test so far. On the other hand, the Swordfish seems to get a performance boost with moderately compressible data. As we mentioned above, the drive basically followed the curve here, too. We don't read too much into it on this budget drive, though; even the slowest performance the Swordfish put up is twice as fast as the best SATA drives around, and the cost is roughly equal.

If you haven't seen your favorite benchmark yet, stay tuned. Our testing continues on the next page...
NEXT PAGE