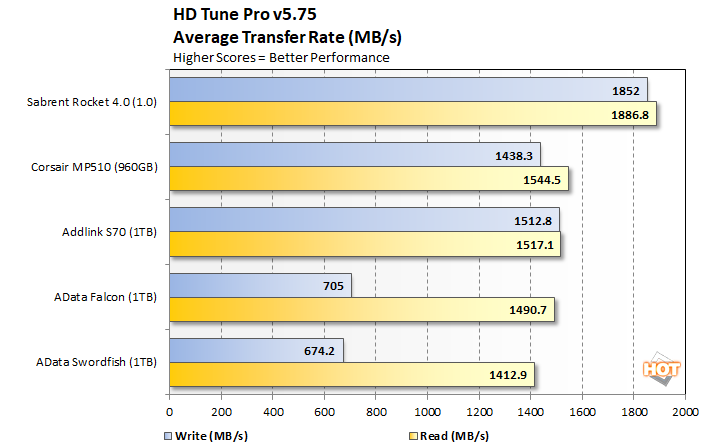 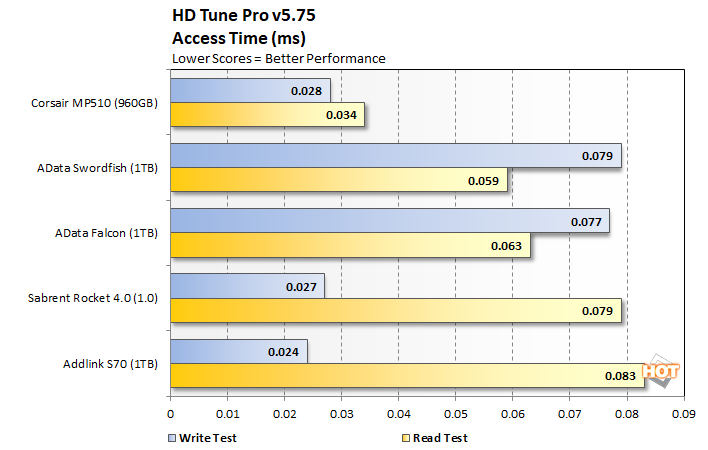 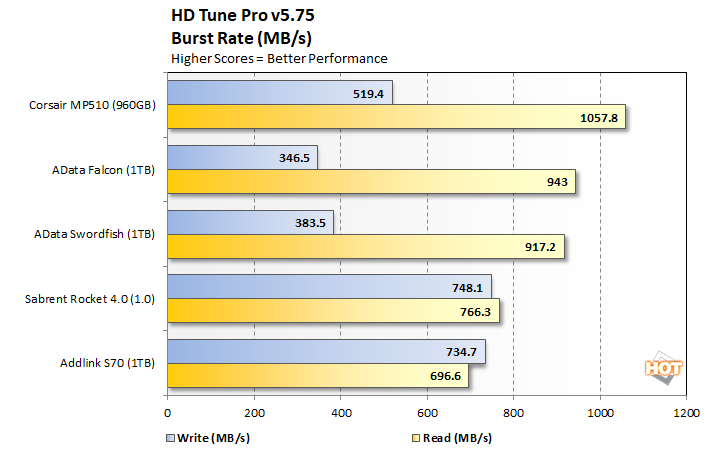 HD Tune Pro's read tests gave us roughly what we expect. The Falcon is bunched tightly together with the Force MP510 and S70, and the Swordfish is still fairly close behind. Their read latency figures were right in line with their bandwidth. Even the burst rate results were right in the middle of the pack, where the premium Sabrent Rocket 4.0 turns in an unusually poor result.

The writes tests, on the other hand, were all over the map. The Falcon and Swordfish turned in questionable write throughput results that were less than half as fast as their contemporaries. When we get to the write latency results, we can see why. Both drives had access times nearly three times as long as any other drive on this test. We're talking about fractions of a millisecond, but over the course of several thousand—or even millions—of operations, that turns into really big blocks of time. We can see the direct result of that in the burst test, which returns write figures half of the other drives. 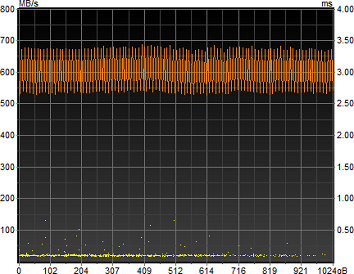 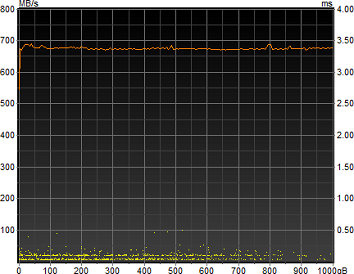 Both the Swordfish and the Falcon advertise SLC caching for improved write performance. We're not sure what the Falcon is doing, but it kept this kind of sawtooth performance throughout multiple runs, even after a Secure Erase in the ADATA SSD Toolbox and letting the system sit idle for 90 minutes. HD Tune uses the full capacity of a drive and requires the drive not be partitioned to run, so it's not a file system problem. ADATA told us that a firmware update for both drives would appear soon in the SSD Toolkit to address some performance oddities we've seen, but as of this publication, that hasn't happened yet. 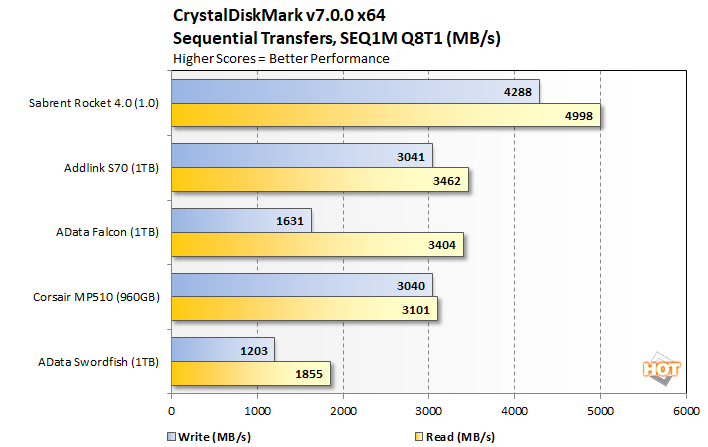 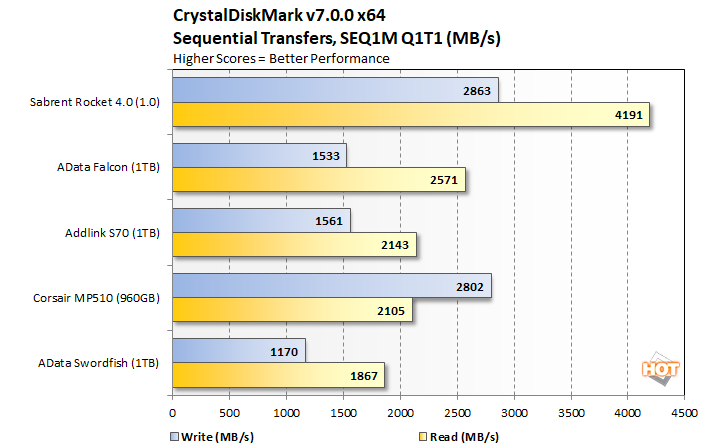 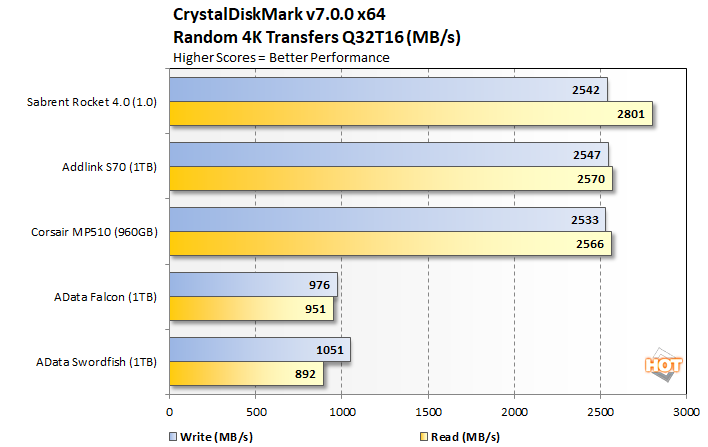 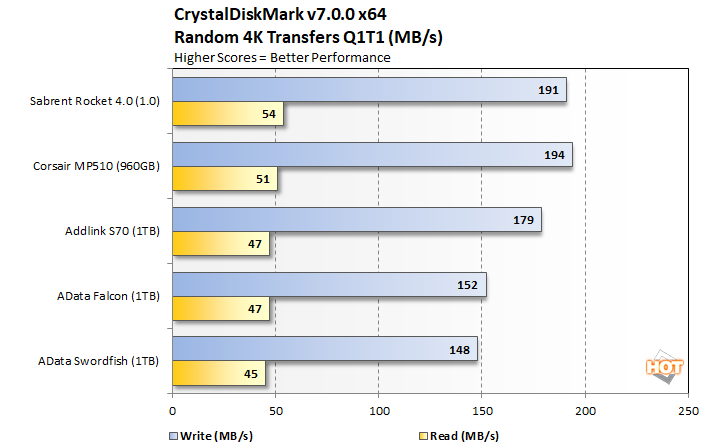 The sequential tests went quite nicely for all of the drives involved, including our ADATA test subjects. Both the Falcon and the Swordfish performed up to their theoretical maximum performance on the heavily threaded Q32 test. The Q1 test is much closer to the behavior of a typical client desktop scenario, though, and the drives still performed pretty much up to expectations.

In that test, the ADATA drives not only took a performance hit compared to their rated specifications, but could only muster performance of roughly one-third of their competition. This could be a result of the higher seek times we saw in HDTune Pro. Whatever the cause, we feel we can somewhat forgive the Swordfish considering its budget-level price and the relative performance of similarly-priced SATA drives, which is much lower still. It's disappointing for the Falcon, however, since its more premium pricing should exclude it from this kind of uneven performance. Even when all of the drives are handicapped by a low queue depth, the ADATA drives fall behind. 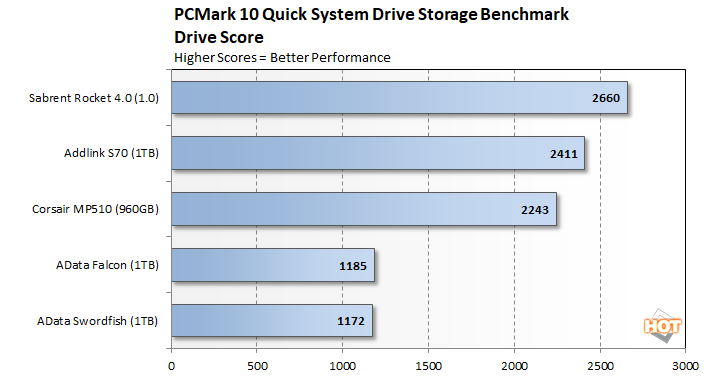 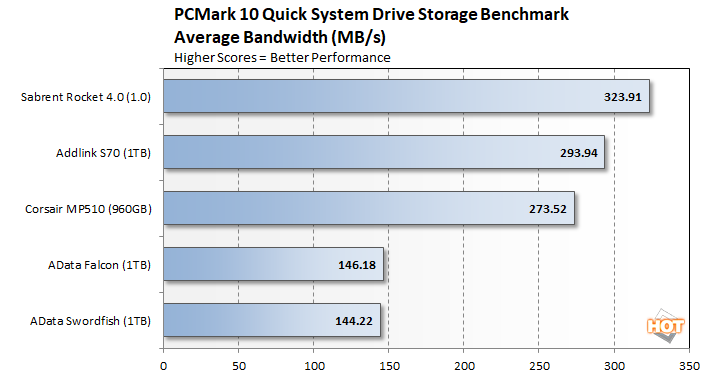 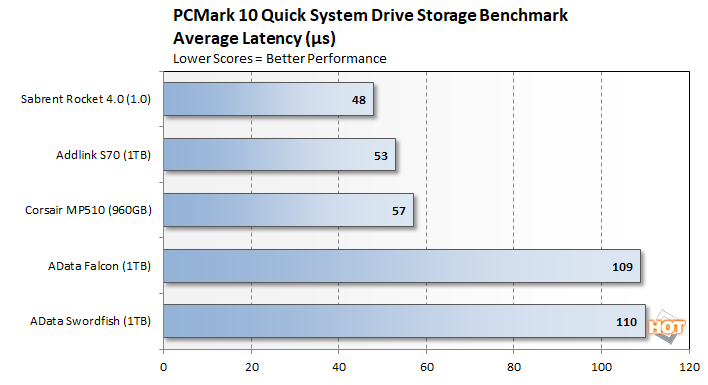 Once again, much higher latencies are the Swordfish and Falcon's Achilles' Heel. There appears to be a direct correlation between a latency nearly twice as high as any other drive and calculated bandwidth that's half as fast as the rest. These drives are definitely sufficient for a secondary drive for our Steam libraries or other game installs, but in this test of real-world system performance, they couldn't quite pass muster as boot volumes.

The performance delivered by ADATA's Falcon was, for the most part, in line with other drives in its performance and price class. There were some surprises, however, that pushed the drive down to the lower end of the performance spectrum. When everything went well for the Falcon, it soared as expected, but when it faltered things didn't go quite as well. That's particularly true of the most real-world test in our suite, PCMark's Quick System Drive test. It turned in half the performance of the rest of the field due to its much higher latency.

There might be some performance relief on the way, though. We asked ADATA about our test results, and the company's rep mentioned that a firmware update would be coming "soon" via the ADATA SSD Toolbox. As of publication time, however, that hasn't happened yet. We'll keep an eye on the situation, however, and follow up when there's more information. This is the first time we've tested a drive powered by Realtek, and although the controllers aren't exactly new, there could be some teething pains that need to be sorted out. ADATA was already aware of the issue when we asked, so we were glad to hear that a solution is in the works. 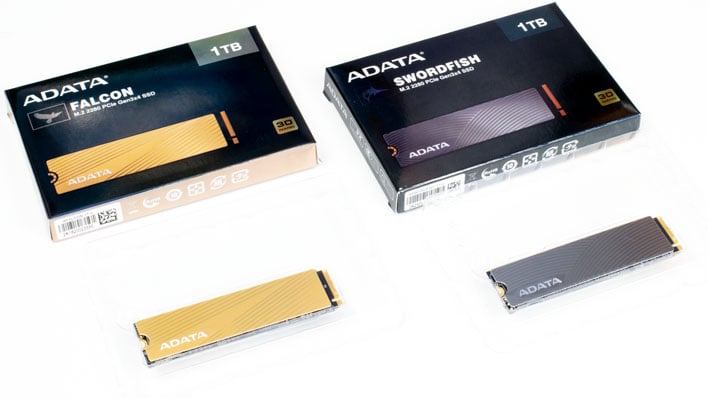 
Overall, ADATA's Swordfish and Falcon represent pretty good values in NVMe solid state drives. From a cost per gigabyte perspective, the 1 TB Swordfish's $115 street price puts it at 11.5 cents per GB, so that drive in particular is one of the lowest-priced NVMe SSDs around. More importantly, this drive's performance places it ahead of similarly-priced SATA drives. In a vacuum, the Swordfish looks like a great evolutionary step down the chain towards NVMe price parity with SATA disks.

The Falcon is generally no slouch, either, and its $129.99 street price means the 1,024 GB version costs just 12.7 cents per GB. It's not all that much more expensive than the Swordfish, yet it consistently delivered much better performance than the slightly cheaper drive. Its asking price is still a bit less than the competition, but only by a smidge. WD's 1 TB Black SN750 retails for $135 on Amazon and the Addlink S70 on display in this review goes for $140. Midrange NVMe storage is a hotly contested market to say the least and the performance stumbles we encountered with the Falcon hurt its position.

We imagine the Swordfish will be popular with system integrators that need baseline performance to check that important NVMe SSD checkbox on their spec sheets. DIY builders might be better off putting a few extra bucks into a faster drive, and that's exactly what the Falcon represents, but only if the promised firmware update corrects the performance pitfalls we observed in our tests. The latency issues we saw mostly happened in synthetic benchmarks. However, that kind of lag issue will affect real-world system responsiveness, and that's exactly what PCMark saw in its tests.

In the end, ADATA's drives mix solid, if unremarkable, performance with a solid endurance rating and a five-year warranty. Add on top of that the lower than usual asking prices, and you've got a recipe for success. If you have a hard budget when building a PC, ADATA's drives—the Falcon, in particular—are worth checking out. On the other hand, if you're just looking for a big NVMe drive to host your favorite Steam games where system performance isn't on the line, the sequential read performance makes these a serious contender.