Will Virtual CES 2021 Be Even Remotely The Same? Here's What To Expect

Last year's Consumer Electronics Show was full of great new tech gear, most of which made its way into retail channels throughout the challenging year that was 2020. We saw AMD launch a two-pronged strike into the notebook and desktop CPU markets that, if not fully in the performance lead, at the very least brought the fight to Intel. There were also tons of notebooks, foldable PCs, and incredible 8K TVs. Unfortunately, due to COVID-19, it was also the last time there'd be any sort of in-person tech conference anywhere in the world, as Mobile World Congress in Barcelona in February was canceled, along with every other major conference scheduled to take place.

This year, CES is a wholly virtual event where vendors from around the world will have to be content with showing off their wares in streaming videos and a cavalcade of press releases. COVID-19 may have made it impossible to gather in Las Vegas in person, causing a shift in the way consumers get to see what's on the horizon, but obviously technological progress has not stopped. There's bound to be a boatload of hardware on display on YouTube, Twitch, and just about any other streaming platform where companies can show off their goods. Virtual CES 2021 officially runs January 11th through the 14th, and here's a look at what should be on display. 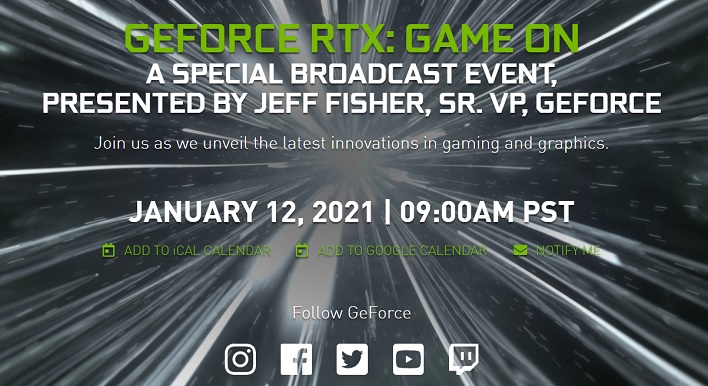 NVIDIA, Intel And AMD Gear Up For Virtual Showstoppers

In the PC space, NVIDIA has a GeForce RTX: Game On event planned for Tuesday the 12th at 9 AM PST -- that's 12 PM EST. While we don't know exactly what will be on display, we expect that some of those GeForce RTX 3000-equipped notebooks that have peeked out of hiding will get official introductions.

Intel is also expected to announce its Rocket Lake-S processor family and accompanying Z590 motherboards. These processors have been rumored to boast big IPC gains on the desktop without the benefit of moving to Intel's 10-nanometer fabrication process thanks to a back-port of sorts of the Ice Lake architecture to 14 nanometers. We figure that all the motherboard manufacturers will have no models on display, too.

AMD has announced that CEO Dr. Lisa Su will have a presentation on Tuesday the 12th at 8 AM PST, or 11 AM EST. The company says Dr. Su will be talking about AMD's processor and graphics portfolio and outline what its plans for the future of education, research, work, and entertainment will be. As far as notebooks go, many vendors have already taken the lids off the 2021 Pandora's Box and announced many models. Lenovo has already shown off a big pile of IdeaPads, ThinkPads, and Yogas. For business users, Dell showed off its planned Latitude and Precision mobile workstations with Tiger Lake CPUs. ASUS has also teased some Ryzen 5000 gaming notebooks under the ROG label, too. We expect to see a lot more where that came from, though, considering that there's still Alienware, HP, and a lot more to hear from.

For TVs and home theaters, we expect 8K displays to really cement their place as the Next Big Thing. LG has already showcased its next-gen QNED Mini LED TVs, for example. We have no doubt that Samsung, Sony, and many other manufacturers will have a lot more to show off, as well. This coming week wlll bring all the goods, so stay tuned to HotHardware for the latest from the virtual showroom floors and event venues.