Who's ready for another round of 14-nanometer desktop CPUs from Intel? What if those CPUs have a refreshed Cypress Cove architecture with better IPC? Ah, now I see a few more hands. Get ready, because it seems that the 11th generation of Core processors is on track to launch in January at CES 2021. Fortunately, it doesn't look like the CPUs will be all that's new, since Intel has big plans for additional expandability like PCI Express 4.0 and Thunderbolt 4 on the table to go alongside Rocket Lake. Unfortunately those platforms might be waiting a little longer.

According to the sleuths at WCCFTech, Intel's (virtual) CES 2021 keynote is scheduled for January 11, 2021. The company is expected to announce both the Rocket Lake 11th-gen CPUs and the PCH for those chips. Rumor has it that motherboards based on the upcoming Z590 chipset should be available starting the 11th, and will be backwards-compatible with existing 10th-gen Core CPUs from the Comet Lake family. The CPUs, based on Intel's Cypress Cove CPU architecture, won't be available until March. That means there's a two-month wait for those who want to build an Intel-based rig unless they want to jump onto the 10th generation.

The CPU clocks don't look all that great, but when we remember that Cypress Cove is basically a back-port of Willow Cove to the 14-nanometer process, they do start to look a little more attractive. According to WCCFTech, the top-end Core i9-11900K will not be a 10-core CPU as the previous-gen Core i9-10900K is. Rather, Intel's top desktop CPU will fall back to just eight cores with 16 threads via Hyper Threading. The payoff is in the form of higher boost clocks, which unfortunately aren't much to write home about. The Core i9-11900K will max out at 5.3 GHz on the turbo clock with an all-core Turbo of 4.8 GHz. That's basically no different from what the Core i9-10900K does at the top end, but with two fewer cores. Hopefully the 11th gen CPU will be able to keep it up for longer, or else this generation is off to a rocky start. 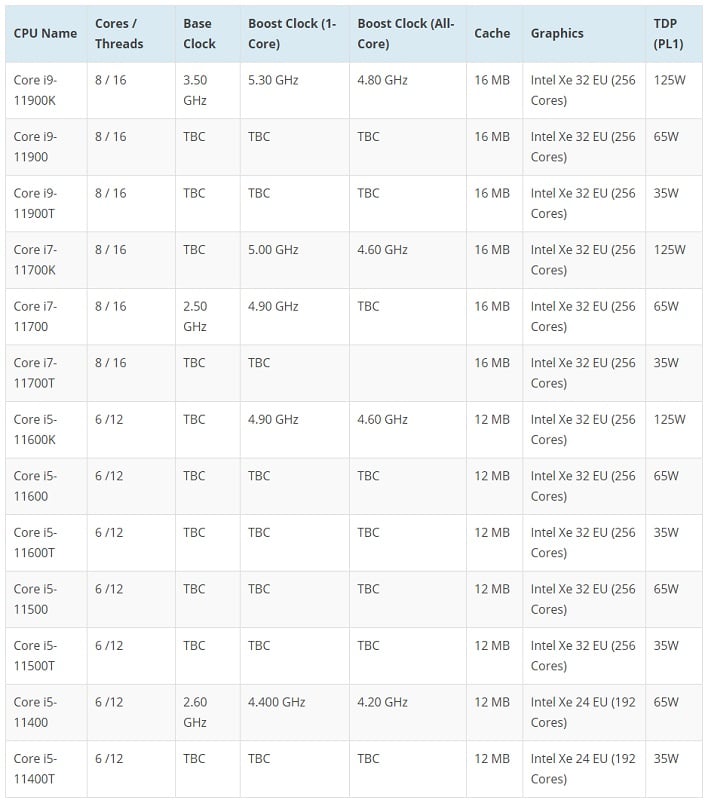 Intel seems to be betting on its improved processor architecture, because from a spec table standpoint, all these CPUs have very similar (or even slightly lower) clock speeds, and have the same L3 cache configurations as their predecessors. However, because Cypress Cove purports to have a higher rate of instruction execution per clock (IPC) much like Willow Cove in Tiger Lake, these things should fly. We've seen in our own Tiger Lake performance reviews that Intel's 28 Watt configuration for the Core i7-1185G7 is quite potent, so these desktop CPUs with twice the cores should also be much more efficient than Comet Lake.

Beyond the CPUs, the Z590 PCH looks to bring some new exciting expansion options, too. First and possibly most important is PCI Express 4.0. AMD's X570 and B550 platforms have enjoyed faster PCIe speeds thanks to the newer spec, and lots of vendors have either already shipped or have announced new NVMe solid-state drives that use the newer spec's increased bandwidth. Even Microsoft's new Xbox Series X and S, and Sony's PlayStation 5 consoles have PCIe 4.0, so Intel is quite late to this party. There are apparently more PCIe lanes built into the CPUs, too, with 20 instead of 16. That's just enough for an x16 graphics card with a PCIe 4.0 NVMe SSD.

There's more than just PCIe 4.0, too. Of course, these CPUs support Intel's latest Thunderbolt 4 spec and have 2.5 Gigabit Ethernet. They're also outfitted with Intel's latest Xe graphics tech, though these CPUs don't get nearly as many execution units (EUs) as the Iris Xe in Tiger Lake notebooks like Dell's XPS 13 2-in-1. Still, there's enough for basic workstation usage, and most gamers will want to pair these up with fast graphics cards anyway. We're interested to see what Intel has up its sleeves, and January 11 isn't all that far away, so stay tuned.