Over the last few weeks, we've seen plenty of leaks for ASUS' upcoming gaming laptops that will be unveiled next week at CES 2021. Unlike in years past, the CES 2021 will be held virtually due to COVID-19, which means that tech journalists won't be mingling by the thousands in Las Vegas, hopping from the LVCC to various hotels along The Strip. ASUS is telegraphing its plans a bit ahead of schedule with teasers for both its incoming ROG Strix and ROG TUF Gaming laptop families.

ASUS posted short video teasers for both its ROG Strix and TUF Gaming lineups, which you can view below. Both will be unveiled next week on January 12th.

ASUS's new ROG gaming laptops will feature both Intel 11th generation Core Tiger Lake-H and AMD Ryzen 5000 Zen 3 mobile processors, and will be available with NVIDIA's latest GeForce RTX 30 Series mobile Ampere GPUs. Back in early December, we got our first insight into the TUF Gaming FX516PM. That laptop is expected to feature an Intel Core i7-11370H CPU, 16GB of RAM, a 512GB SSD, and a GeForce RTX 3060 GPU. The Core i7-11370H is expected to be a performance-minded SKU (hence the "H") with a turbo clock of 4.8GHz. 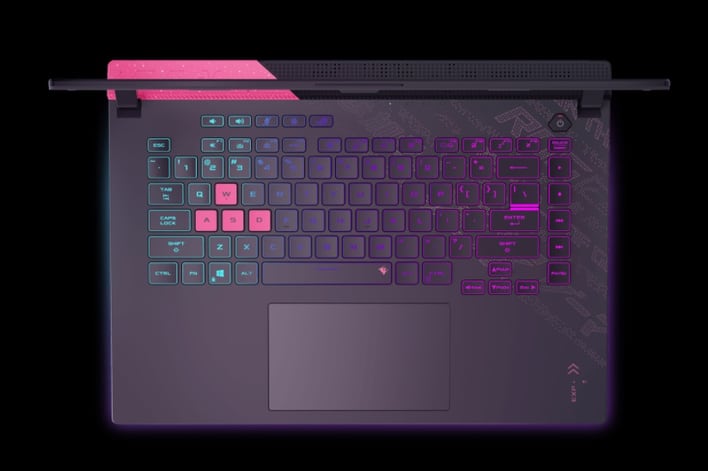 In late December, most of the beans were spilled concerning the ROG Strix family. These laptops will feature a variety of Ryzen 5000 processors onboard, up to a Ryzen 9 5900H. The Ryzen 9 5900H is an 8-core/16-thread processor with a base clock of 3.3GHz and a boost clock of 4.64GHz. ASUS is planning to configure its ROG Strix laptop with up to 32GB of RAM, up to a 1TB SSD, and up to a GeForce RTX 3080 GPU. There will also be a variety of display options available including 300Hz 1080p, 165Hz 2K, and 60Hz 4K displays.

Given how much information on ASUS's upcoming laptop lineup has already leaked over the past month, we have the feeling that more specs and images will make their way to the internet over the next week. So, stay tuned to HotHardware in the coming days for more details as they become available.