Inside companies like AMD, Intel, and NVIDIA, hardware and software engineers often work far removed from the marketing teams that determine the final product names. You've got to have a name for what you're working on while you're working on it, though. That's where all these wacky code names that we frequently report on originate.


For some time now, AMD's Radeon division has been using some pretty fishy names for its pre-release GPUs. No, we mean that literally—the names combine a color and a type of fish. For the RDNA 2 GPUs comprising the Navi 2x series, we had Sienna Cichlid, Navy Flounder, Dimgrey Cavefish, and Beige Goby.


The latest leaks suggest that the company is continuing that trend with its upcoming graphics processors, both the RDNA 3-based Navi 3x family as well as its integrated graphics based on the same architecture. Over at Angstronomics, leaker SkyJuice has posted up an extensive breakdown of the Navi 3x family that includes a few new details. 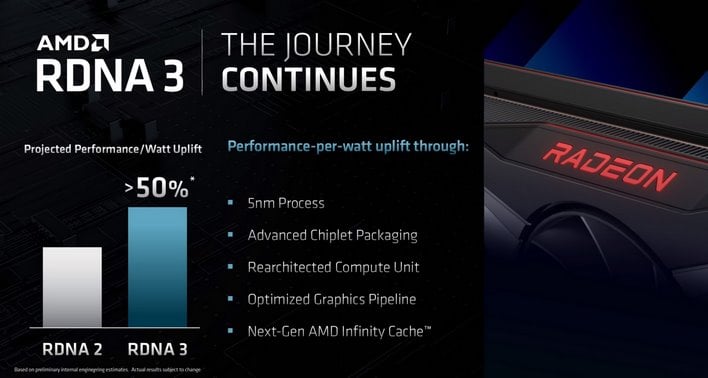 
The most interesting part of Angstronomics' new information is that, apparently, RDNA 3 actually has less Infinity Cache than RDNA 2. This is surprising, as it goes against what we thought was the case before. According to SkyJuice, RDNA 3 will have just 16MB of cache on each MCD, instead of 32MB as presumed before. 32MB per MCD would have given the RDNA 3 parts the same cache allotment as RDNA 2, and obviously, 16MB per MCD is half of that.


The leak goes on to say that there are indeed versions that include an additional 16MB of Infinity Cache via a stacked cache die (ala 3D V-Cache), but that "the performance benefit is limited given the cost increase." This seems odd to us, as the tendency of higher-end Radeon 6000-series parts to lose more performance than expected at high resolutions is well-documented, and it has long been assumed that this was due to overrunning the Infinity Cache. If that is indeed the case, then that means that next-gen Radeons will still struggle with this issue.


Fascinatingly, the post on Angstronomics explains that an RDNA3 Workgroup Processor (WGP) is actually slightly smaller in area than an RDNA2 WGP due to the removal of legacy cruft and some changes to the architecture. That's particularly impressive because RDNA3 WGPs are twice as wide as RDNA 2 WGPs. That means they have twice as much FP32 compute power due to a doubling of the number of ALUs in the WGP. This detail helps to explain why the Navi 31 and Navi 32 Graphics Compute Dice (GCDs) appeared surprisingly small in the renders we saw before.


It's mostly of academic interest, but Angstronomics gives code names of "Plum Bonito" for Navi 31, "Wheat Nas" for Navi 32, and "Hotpink Bonefish" for Navi 33. Apparently, the latter chip will be primarily utilized in AMD Advantage laptops. SkyJuice says that the processor was originally envisioned as a chiplet design, but that it was changed to monolithic after AMD decided the chiplet design "could not meet the volume and cost structure of this class of GPU." In other words, it's too small to benefit from chiplets.
Over at Japanese hardware blog Coelacanth's Dream, the Coelacanth points out a patch to the Linux ALSA project that adds support for AMD's "Pink Sardine" platform. What in the world is that? Well, that's the name for the red team's forthcoming Phoenix APUs. Savvy AMD fans could probably deduce this, as the company's Cezanne APUs were code named "Green Sardine," while the AMD Ryzen 6000 mobile processors code named Rembrandt are also known as "Yellow Carp."

The Coelacanth also points out that another APU code name was revealed recently, and that was "Sabrina." Sabrina seems to be the code name for AMD's low-power Mendocino APUs. That one's not a color-and-fish code name because it's the moniker for the APU product itself, not strictly for its graphics portion.

The Navi 3x family of RDNA 3-based graphics processors is expected to launch later this year, possibly in October or November. While the desktop Ryzen 7000 processors will likely release relatively soon (in mid-September), the APUs based on Phoenix are not expected until early next year.