Recent rumors have implied that top brass at Intel were considering the cancellation of Arc's entire product line. While Intel has been known to do such a thing—that was the eventual fate of Larrabee—it seems unlikely to us given that the AXG (Accelerated Computing Systems and Graphics) division cost the company some $500 million over the last year. That's a lot of money to just throw away, even for Intel. Well, a tweet from Raja Koduri and a new leak from contentious-but-reliable leaker Igor Wallossek would seem to put a damper on that idea.

In case you're new around here, Raja is the head of Intel's Accelerated Computing Systems and Graphics, or "AXG" division. He tweeted a reply to analyst Anshel Sag late yesterday saying that AXG is "very much committed to [its] roadmap" and that the group is "on track to ramp 4 new product lines by the end of the year." 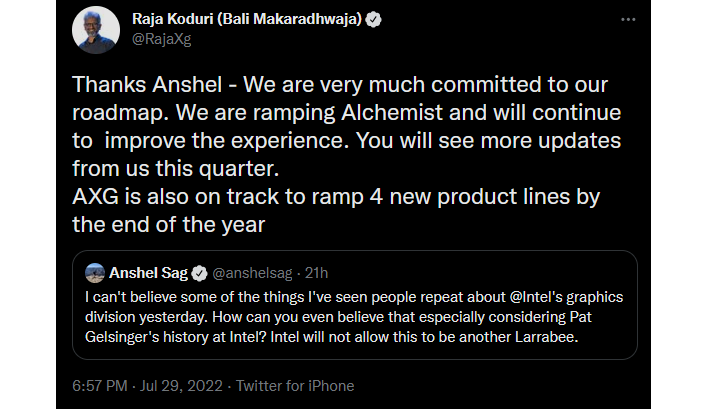 For Igor's part, he posted up a blog entry today sharing a possible launch date for Intel's higher-end Arc products. According to him, Intel's internal documents have indeed abandoned the idea of a "large-scale, joint launch event" but are instead focused on what could be a "silent" launch, where products are simply pushed onto store shelves and into OEM machines without a lot of fanfare. 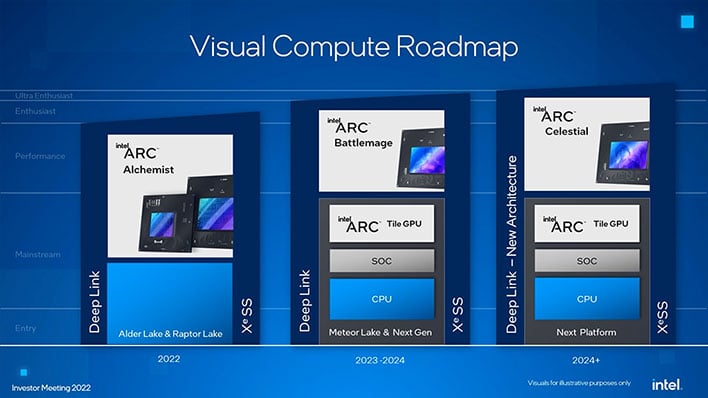 As Igor points out, this is not exactly unheard-of, but usually it is what manufacturers do with their less-exciting or less-glamorous products. Interestingly, it actually matches up with what Intel itself has said. Over on The Full Nerd livestream with PC World, Intel's Tom and Ryan, whom we also spoke with, stated that Arc cards won't be formally announced until they are shipping to customers.

The Intel Arc A380 discrete GPU has only officially launched as a discrete card in China, but naturally, wily Western reviewers got their hands on the parts and tested them anyway. The reviews have come away with mixed impressions. Certain outlets were savage and said quite strong things about Arc, while other outlets were more measured and hopeful for future updates.

The A380 is in a weird place, and arguably a strange thing to launch first. Folks who just want a graphics card will likely be targeting even lower-end models like the rumored A350 or even the A310. Meanwhile, enthusiasts and gamers are more interested in the higher-end A500 and A700 models.

Igor says that we can expect all of the faster Arc cards to hit the market by September 29th. That's admittedly a far cry from Intel's original stated release window, but if the A750 or A770 perform as well as Intel claims in AAA games, they could still present a reasonable value proposition. After all, AMD and NVIDIA are likely both focused on going head-to-head in the high-end market. That might give Intel room to slip under the radar and capture some marketshare in the mid-range and lower-end space over the next two months.