Regular readers are surely well aware that Intel's released Arc as a desktop product over in China. The entry-level Arc A380 Photon card from new vendor Gunnir looks pretty snazzy. A few of those cards have made their way over to the US, first in the hands of one Mr. Ryan Shrout, and now in the mitts of Gamers Nexus.


The popular hardware YouTube channel has put up a review of the A380, but that's not the only part that diehard enthusiasts are going to eager to check out. After all, the A380 falls into entry-level territory, competing with AMD's Radeon RX 6500 XT in some titles. Respectable, especially if it ends up priced under $150, but not directly relevant if you're wanting to see what Intel's higher end GPUs can do. 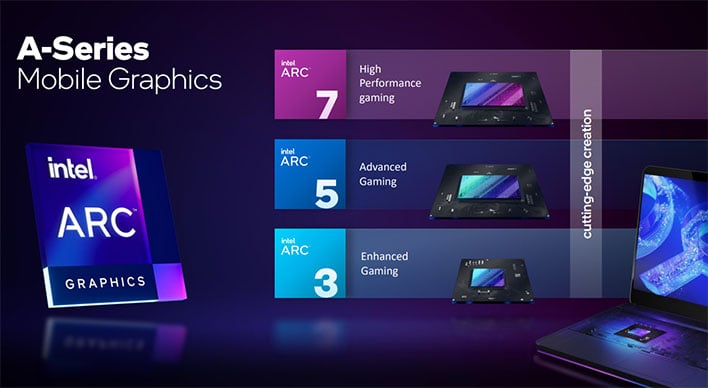 This is for mobile chips, but the naming scheme is the same.


Indeed, the cards enthusiasts are all looking forward to are the Arc A7 series GPUs. Intel laid it out clearly for everyone back in March when it paper launched the Arc mobile GPUs: Arc 3 is entry-level, Arc 5 is mid-range, and Arc 7 is high-performance—at least relative to other Arc GPUs.


Well, as it happens, Gamers Nexus also seems to have acquired (or at least laid hands on) an Arc A750 discrete GPU. This is the first we've seen of this card in the flesh, although we knew of its existence way back in April. It looks extremely similar to the Limited Edition card that we saw in March, which could imply that, as we surmised, "Limited Edition" is less of a statement of availability and more of a brand, like Founders Edition.

It would be all too easy to assume that the site is planning a review of the A750 to follow up its A380 review. However, while Steve says that they've run some benchmarks on the card, they are not currently in the process of reviewing it. Not yet, anyway.