Intel Larrabee Prototype GPU Scores Over $5,200 On Ebay And Yes It Still Works

If everything goes to plan, Intel this year will launch Arc Alchemist and finally have a dog in the discrete GPU fight, battling AMD (Radeon) and NVIDIA (GeForce) for gaming dollars. In the meantime, someone has sold a blast from past from Intel's last attempt to make a discrete GPU, with a Larrabee prototype fetching around 4,650 euros (around $5,230) on eBay.
Larrabee is ancient history at this point, though Intel had originally intended for it to make a splash in the consumer space with a 2010 release. Instead, Intel shelved its Larrabee plans that year, at the time saying it will "not bring a discrete graphics product to market, at least in the short term." Then as the years went by, it appear as though Intel had no long term discrete GPU plans, either.
That is, until Intel persuaded AMD's former graphics boss Raja Koduri to join the Santa Clara chip maker and lead its own revitalized discrete GPU efforts.That was a little over four years ago, and now Intel is on the cusp of finally competing in the discrete GPU space—Arc Alchemist is right around the corner, and there's a roadmap for several future generation follow-ups. 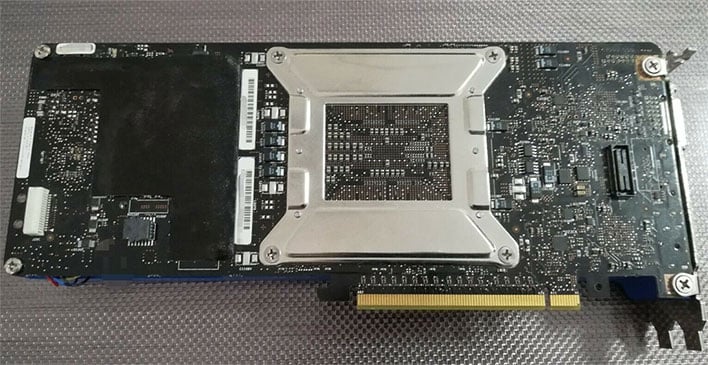 As for Larrabee, a purported "WORKING PROTOTYPE!!!" recently sold on eBay France for around twice the amount that NVIDIA's GeForce RTX 3090 cards are fetching on the auction site (the going rate is around $2,500).
There are a handful of pictures on the now-ended auction listing. A closeup shot of the single fan carries an "Engineering Sample" label. The card even comes in a cushioned (foam) metal brief case, though hopefully the collector who purchased this card ends up putting it on display (cue the "it belongs in a museum!" clip from Indiana Jones). 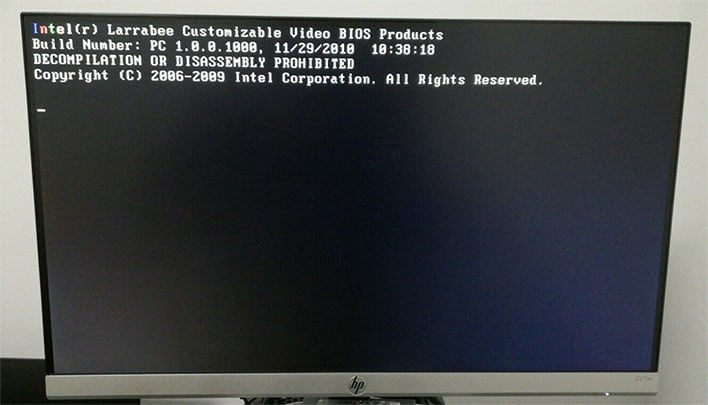 "Intel Larrabee Knights Ferry WORKING PROTOTYPE !!!. The one and only working Larrabee prototype in the world. If you are a serious collector this is going to be probably your only chance to get this piece of history. It gives video from every conector so totally functional. Sadly i have no drivers for it," the description reads.
A screenshot of the video BIOS serves as apparent prove that it does indeed work as advertised, though as the seller alludes to in the description, finding drivers for the card is the tricky part. However, we presume the buyer didn't snatch this card up with the hopes of actually using it (even amid a GPU shortage), but as a neat collection piece.
We can't say for sure, but it's certainly possible this is the last working Larrabee prototype that exists. Even if not, there can't be a too many of them. For anyone curious, underneath that blue shroud is a chip architecture derived from a dual-issue Pentium processor with a short execution pipeline and fully coherent cache structure.
Images courtesy of eBay/leodanmarjod