Intel Arc will be fully out in the open very soon. However you qualify it, we now know the cards will be available a week from now, on October 12th, though reviews will begin popping up tomorrow, 10/5/22. On the eve of this event, Intel’s Tom “TAP” Petersen and Ryan Shrout sat down with Raja Koduri, the Vice President of Accelerated Computing Systems and Graphics (AXG), to reflect on their experiences and the road traveled leading up to Intel's Arc launch.

Shrout kicked off the conversation by asking Raja about how he thinks the Intel Graphics team ended up. “It’s a lot of mixed emotions,” replied the graphics chief, “first, gratitude. Lots of teams have worked very hard for a long period of time.” In particular, Koduri recounted the difficulty of bringing up new silicon during the COVID pandemic, “How do you get people to the labs?” Koduri also pointed out that these new teams did not have experience working with one another yet, in many cases.


TAP then brought the conversation around to the performance of the newly launched GPU’s themselves, specifically the shortcomings like DirectX 11 competitiveness that are not yet completely solved. Raja explains that Arc does well with DX11 applications in GPU bound scenarios and excels with tasks like pixel shading. However, Arc A700 series issues in games crop up when the CPU has to make excessive amounts of draw calls, a problem which Raja assures can be mitigated as drivers mature.

Intel is no stranger to graphics, of course, as the company has shipped integrated GPUs on board CPU packages since Clarkdale. Much of this particular driver teeth-cutting is only coming to the surface now because the iGPUs were never powerful enough to be CPU bound and expose these specific inefficiencies. This has yielded what the trio says is an efficient GPU-bound pipeline, but more work needs to be done for the CPU-limited cases that Arc faces now. 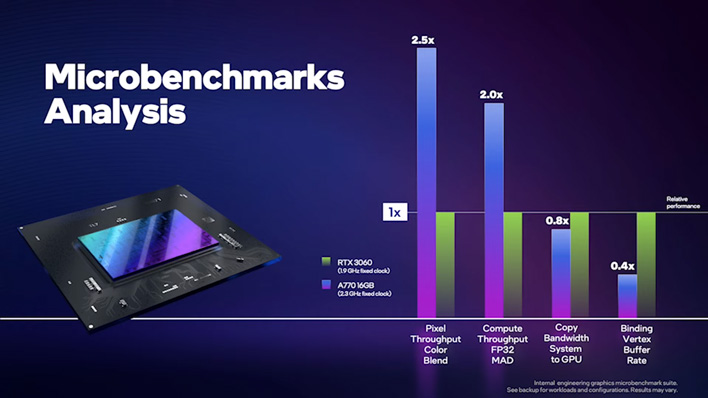 Koduri says that he approaches these issues as an architect. Instead of examining end-results, like gaming benchmarks, he focuses on “microbenchmarks.” These are focused on simplified workloads that stress singular aspects of the GPU. Through this granularity, strengths and bottlenecks alike can be identified so they can be focused on. As examples, Koduri shows the Arc A770 LE provides 2.5x the pixel throughput color blend of the NVIDIA GeForce RTX 3060, its price competitor. It similarly offers 2x the compute throughput in 32-bit floating point operations.

However, a system is only as strong as its weakest links. To that end, Raja shows that the Arc card is only delivering 0.8x the bandwidth of its NVIDIA foil when copying data from the CPU to GPU. He remarks that copying data in this way was just not necessary with integrated GPUs, and as such they are learning how to do it more efficiently with Arc. He goes on to show that the binding vertex buffer rate is an even bigger pain point with 0.4x the competition. These deficiencies do not show in every workload but do help explain some of the perceived inconsistencies experienced by end users.

“Before we get to Battlemage, I see our software stack getting better,” continued Koduri, “And we do need that. Remember I said, as the engine gets bigger and bigger and faster, your bottlenecks shift to the CPU.” As a result, he says Battlemage will require even more performance from the drivers.


As the conversation turned to Battlemage, the trio discussed how it currently fares relative to Alchemist at the same point in development. The biggest difference is now having reference points: bug trackers, performance goals, pre-silicon verification and emulation, etc. Raja says that Battlemage is “substantially better” than where Alchemist was at this point in the development cycle.

The talk did not shy away from the fate of Intel Graphics in the future. Raja assured that Intel CEO Pat Gelsinger wants the company to be involved in high performance discrete graphics products. “He definitely sees that in general purpose computing—for computer graphics, for gaming, for visualization, for simulation, for AI—its an essential product plane, tool, and architecture that Intel needs to have,” elaborated Koduri, who then predicted that this technology will be necessary “in every socket” by 2025. 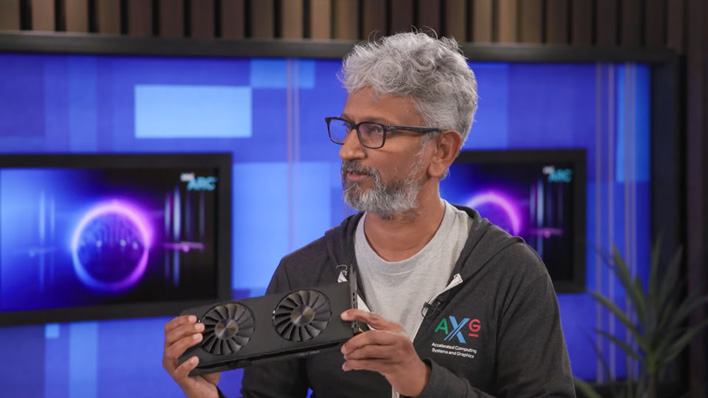 “If you look at what this [card] enables for Intel, it enables a ton of software ecosystems to be running on Intel hardware, Intel software, with features like Ray Tracing, XeSS, AV1 encoding—premium content,” closed Koduri, “Deliver as much performance as you can in every formfactor.”

The discussion was a refreshing look into the thought processes that drove a major player and a major launch in the silicon space. Regardless of what the fates may hold for Arc Alchemist as review embargos lift and the cards reach market, we hope the Intel Graphics team will continue to embrace transparency. These organic roundtable discussions, which do not shy away from Intel's shortcomings, are far more palatable than many types of traditional marketing.