Along with its Arc Alchemist GPUs, Intel is launching an AI-powered smart upscaler most similar in form to NVIDIA's DLSS. It's known as XeSS, and just like DLSS, it requires game integration. Even though the higher-end Arc cards are not yet publicly available, Digital Foundry was given early access to do one of its trademark pixel-peeping image quality comparisons, and the results look pretty good for Intel.


Not flawless, mind you—for one thing, the tests only covered one game, and that's Shadow of the Tomb Raider. Despite being showcased only in a single released game so far, XeSS seems to comport itself pretty well. As that site's Alex Battaglia points out, it's largely inferior to DLSS, but that method has had years of refinement. Meanwhile, XeSS isn't even technically out yet.
With those caveats in place, the comparison is a lot more even than you'd likely expect from a pre-release upscaling solution. Most of the time, it looks pretty good, and usually better than simply layering on TAA to smooth out the imperfections. That's more than we can say for AMD's first attempt, anyway.
In some ways, XeSS is better than AMD's second attempt, too. FSR 2.0 struggled with "disocclusion" artifacts when rapidly moving objects revealed previously unseen parts of the scene. XeSS doesn't suffer any of these problems, at least in Alex's testing. However, it does still have some noticeable image quality problems.
The majority of XeSS issues come down to problems dealing with fine details in the scene. The AI powering XeSS doesn't seem able to handle objects that contain repeating details when there's insufficient resolution, resulting in powerful shimmering artifacts or moiré patterns. DLSS struggled with artifacts like this in its 1.0 revision, too, so we expect Intel can get these problems resolved. 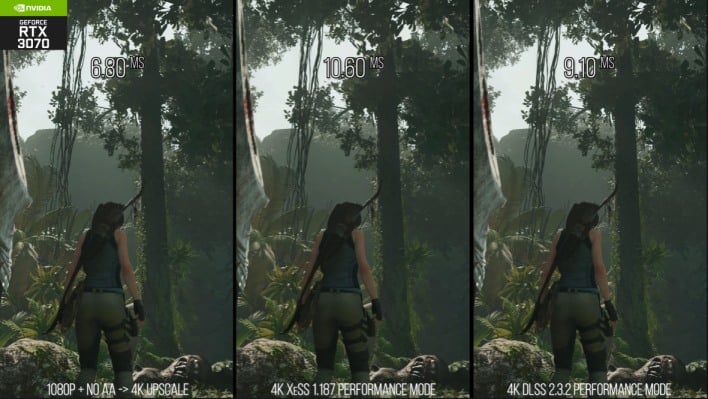 One major advantage that XeSS has over DLSS is that it runs on competitors' hardware, albeit using a less efficient algorithm. Sadly, Battaglia didn't do an image-quality comparison between XeSS on the Arc GPU and XeSS on a GeForce GPU, but he did briefly take a look at performance. The cost of XeSS was about 1.5 ms higher versus DLSS on an RTX 3070, which is not bad at all.
However, Intel has already admitted that XeSS on competitor GPUs won't achieve the same level of quality as when running on an Arc card. In that case, without image quality comparisons between the two, it's hard to say how the technique compares to AMD's similarly open FSR 2, especially since that method just got a big improvement to the specific area that XeSS struggles with in its 2.1 revision. 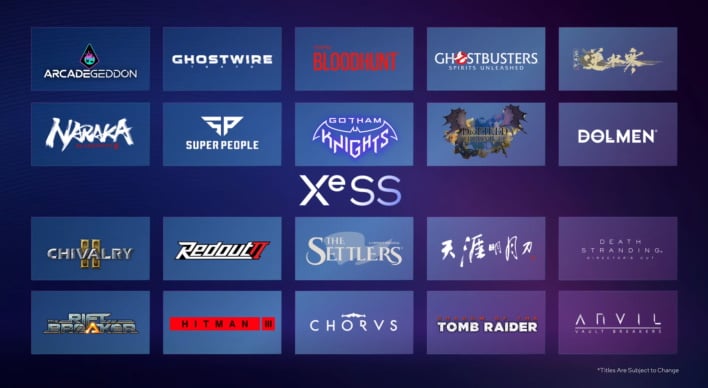 Intel says that XeSS is coming to more than twenty games, including big-name titles like Call of Duty: Modern Warfare II and Death Stranding: Director's Cut. The technology will be unveiled on or before the launch of the high-end XeSS cards, which should be any day now.