Intel's "soon" for launching its Arc Alchemist desktop GPUs may actually be sooner rather than later. Contestants of the Xe HPG Scavenger Hunt were emailed late Friday, asking for their shipping address to be confirmed.

The Intel Xe HPG Scavenger Hunt began nearly one year ago on October 27, 2021. Winners of the contest have been waiting since it ended in January of 2022 for some sort of confirmation that their prizes were in fact being shipped. The top 100 are set to receive an A770 LE GPU with swag, while 101-300 are expecting an A750 LE with swag. 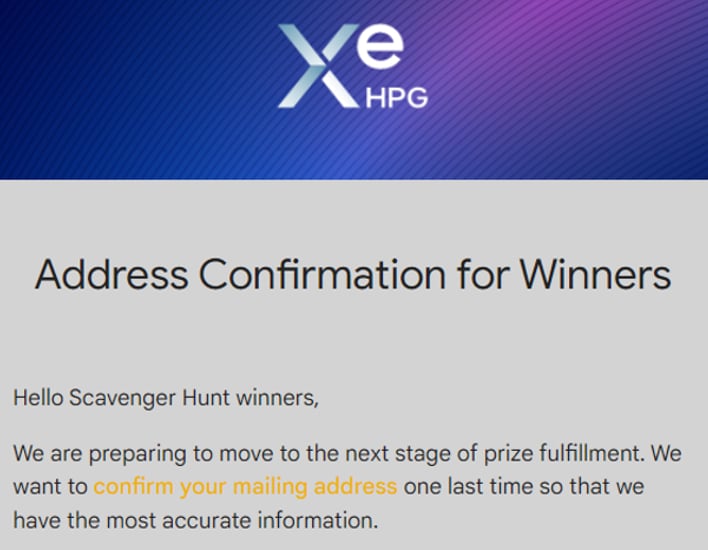 The launch of Arc GPUs has been a bit of a rough go for Intel, with several delays and the best time frame given for launch of its higher end desktop GPUs being "soon," or "very soon," over the last month or so. For those that participated in the Scavenger Hunt, that wait has been perhaps a bit more excruciating than for others.

But there seems to be a light at the end of the tunnel with the last email sent to winners who placed in the top 300. The fact that Intel is asking for shipping address confirmation and saying that winners will be notified with shipping details and tracking information once their prizes ship, came as a great comfort to those who have been waiting, impatiently at times, for the prizes they won at the turn of this year. Unfortunately, there is still no update for those outside the top 300 who won a voucher for money off an Arc GPU at launch. 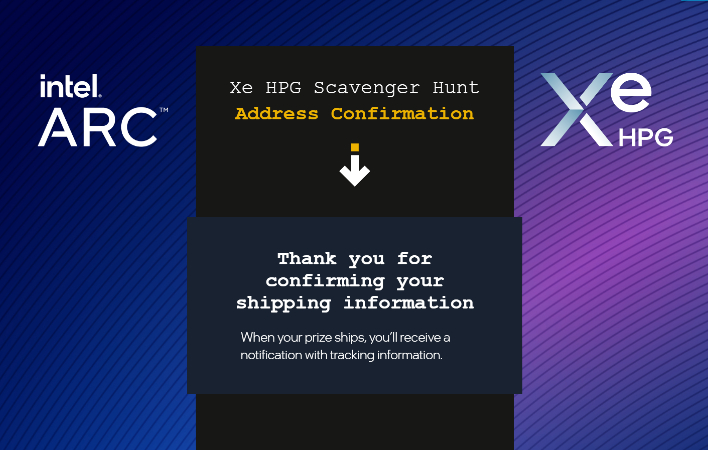 It is possible that Intel is intending to make an official announcement this coming week. Its Innovation event is scheduled to begin on September 27th, so it could during the event, or perhaps beforehand. At this time, nothing has been confirmed by the tech giant, but many of us are hopeful this will in fact be the case.

With tweets from the likes of Pat Gelsinger and Raja Koduri concerning Arc desktop cards this past week, it is not a far stretch to think the announcement is very close. Now that the company has asked for shipping address confirmations from the Scavenger Hunt winners, it is simply another indicator that the launch is hopefully indeed "very soon" after all.