Intel Graphics' Tom "TAP" Petersen confirmed on our Two and a Half Geeks livestream last night, that a 'random' Arc A770 graphics card was easily overclocked to 2.7GHz, and stable enough at this blistering clock speed for AAA gaming sessions. TAP also noted that the graphics card, which would normally run at up to 2.1GHz stock, wasn't cherry-picked either.

In some other tasty morsels from Thursday's livestream AMA (ask-me-anything) session, TAP answered questions about Arc graphics card cancellation rumors, ray tracing performance, DirectX APIs, specs of the A750 and A770, the Arc generations ahead (Battlemage, Celestial, Druid…), and much more.


HotHardware Editor In Chief, Dave Altavilla and Managing Editor, Marco Chiappetta sat down for an hour with the ebullient Tom "TAP" Petersen from Intel Graphics for a reader-driven livestream fireside chat of sorts.

Probably the biggest news to slip from TAP's lips was that the upcoming Arc A770 is a monster overclocker, with a 'random' sample being able to game at 2.7GHz. The graphics card up to this feat was the Intel Arc A770 Limited Edition model, and it didn't push past the 80 to 90 degrees Celsius zone or 228W (just 3W more than advertised TBP). All it needed was some minor voltage and fan tweaking with the standard air cooler for the purported overclock: nearly 30% faster than stock. TAP says the card was used for some Hitman 3 gaming fun.

You will have seen the Arc A770 before, probably multiple times, in Intel videos and our reports. It is a cleanly designed graphics card but with ample RGB lighting zones for those that prefer to show off their PC hardware. TAP gave us another look at this GPU and hand measured the twin fan design at roughly 10-inches in length (approx 254mm).

TAP shared a new slide with full specifications for the Arc A770 and A750 Limited Edition cards for the first time. Information gleaned from this slide solidifies the card length at 10.5-inches (approx 266mm) which should probably be trusted over TAP's earnest attempt to measure on stream. Likewise, this is the first disclosure that these cards will carry 3-year warranties and that popular Linux distribution Ubuntu will be officially supported. 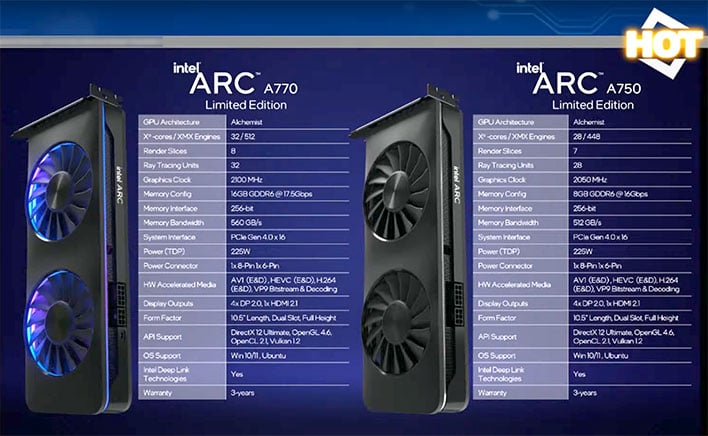 We managed to extract deeper specs than ever previously shared, from TAP.

When asked about using Arc Alchemist cards for primarily DirectX 9 based games, TAP candidly reiterated that he wouldn't recommend it. There aren't many DX9 games that are still very popular, except for the eSports phenomenon, which is CS:GO. Others running older games for fun (rather than competitively) will still probably be well served by Arc Alchemist hardware with triple digit framerates, even if the framerates do not reach quite as high as competing solutions. 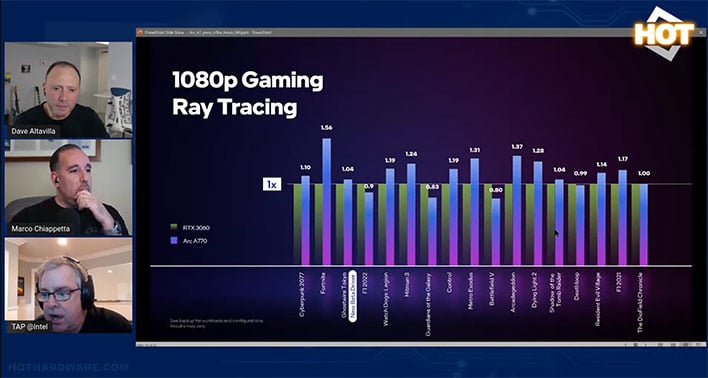 On the topic of ray tracing performance, TAP was very confident about Intel's standing. Its architecture meant that adding ray tracing frills to modern games caused only a modest dip in frame rates compared to competitors. This was an aspect of the Arc Alchemist graphics series that was also well-served by Intel's XeSS—its upscaling tech designed to rival NVIDIA DLSS and AMD FSR. TAP shared a lot of technical information about ray tracing and the underlying graphics hardware. To learn more, please sit back and enjoy the above embedded video.

We think it is worth highlighting the way TAP addressed the rumors of Intel Arc's demise. It has been put forward by a popular tech YouTuber that Arc graphics cards are almost at the end of the road, and that if we do see Battlemage it will be just a handful of low-end SKUs. TAP told Dave and Marco that the bulk of Intel's Arc team are busy working on Battlemage right now, with "excellent progress" on both hardware and software sides of the equation. "The rumors that [Battlemage is] cancelled are completely false," TAP underlined verbally, and later added the next generation would be a full stack.

He went on to stress how important GPUs are to Intel's forward-looking accelerated computing vision, across the full spectrum of its customers, with synergies between the diverse GPU products. Last but not least, TAP kind-of put his reputation with listeners on the line by asking for viewer suggestions for the code names of GPUs beyond the Druid generation.

Pricing of the Arc A770 is going to be very competitive against the NVIDIA GPU it has been repeatedly compared with—the GeForce RTX 3060. Thus, we interpret this to mean PC DIYers should expect a price similar, if not better than the RTX 3060 MSRP ($329). Lastly, we know Intel's remaining Arc Alchemist graphics cards are due "soon," but we couldn't get a launch date pinned down. The most logical time and place for a launch given where we are in the calendar is at the Intel Innovation event on Sept 27, where Raptor Lake is expected to emerge.

Intel has just published a new video outlining the best practice for overclocking the Arc A750 and has also treated us with an Arc A770 teardown for those that are interested about what is under the cooling shroud.