Early reviews of the Intel Arc graphics cards have not been bursting with praise. We only have reputable third-party reviews of the entry level Arc A380 thus far, but even with suitably lowered expectations, no one is recommending these Intel discrete GPUs for general use. A video published by Intel Graphics today might help explain a lot of the reported terrible performance reports, and we think it is a reasonable spin – basically, Intel Arc GPUs are only really optimized for modern workloads.


Intel Fellow Tom Petersen and Intel Arc Graphics Marketing exec Ryan Shrout took to YouTube today to deliver a Q&A focused on Arc performance using legacy and newer graphics APIs. While it is good to see Intel cover this ground, officially, it was already well understood by anyone keeping up with Intel Arc rollout news that one of Arc’s Achilles' heels was older graphics APIs.

Peterson took the lead in answering the question for Intel. To sum up his spiel, he said Microsoft worked on DX11 and looked after memory management for devs, but it kind of took the view that Nvidia GPUs would be the default. Remember, Peterson spent a long stretch of his career at Nvidia.

After DX11, DX12 and Vulkan “changed the paradigm,” asserted Peterson, and much more memory management and optimization work was shifted to developers to get right on multiple platforms. Thus, the DX12 memory management layer was much thinner and doesn’t ‘prefer’ any particular GPU architecture. 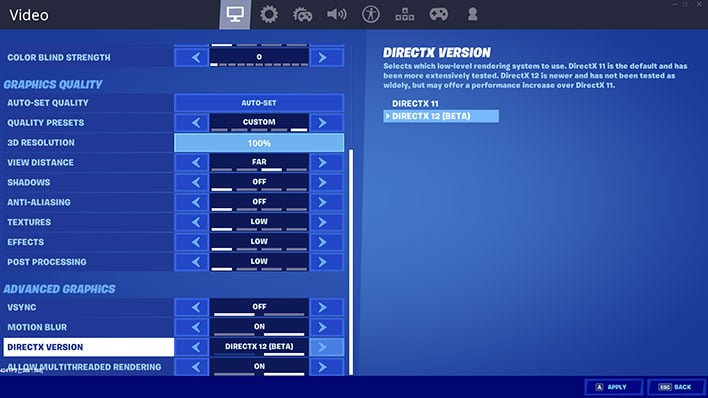 It must be noted that not all DX11 games, or DX9 for that matter, perform poorly on Intel, but if there is going to be a slow game on Arc in your collection it will probably be with one of these legacy APIs. In the Q&A Intel said it would continue to go back and make optimizations for the badly performing older titles, but thankfully newer games more often than not offer a DX12 or Vulcan rendering path. Shrout chipped in to highlight the fact that some developers have both DX11 and DX12 options in their games, and others have revamped older legacy titles with updates enabling DX12 (or Vulkan) rendering options, as per the example of Fortnite, above.

Intel ended the video by saying that it will be back soon with more Q&A highlights, so please stay tuned.