Hot Hardware Picks For The Best Of CES 2021

This year's Consumer Electronics Show (CES) was a different sort of animal than all previous ones, as the Coronavirus pandemic took away the feasibility of big crowds congregating in Las Vegas. In light of the situation, CES went completely virtual this year. What did not change, however, was the excitement and barrage of product releases and announcements that have become a staple of the annual tech event. This year did not disappoint in that regard. And as in previous years, there were some standouts among the bunch.
What exactly stood out the most? Quite a few products, actually, which we have taken the liberty of highlighting. From next-gen laptops sporting brand new CPU and GPU hardware, to a bendable 48-inch OLED display, there was a lot of interesting stuff shown off this year.

So without further ado, here is a collection of our favorite product unveils at the show—Hot Hardware's Best of CES 2021... 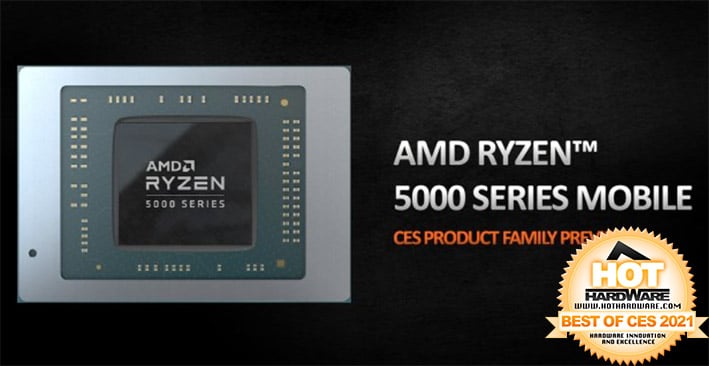 One of the most exciting product unveils was not the least bit surprising, because there was a barrage of leaks leading up to the announcement. We're of course talking about AMD's Ryzen 5000 series of mobile processors. While completely expected, the porting of Zen 3 over to mobile is a big deal, with AMD announcing lineups for both thin and light laptops (U-series) and high-performance notebooks (H-series). AMD unveiled a total of 13 mobile chips, three of which are actually based on Zen 2, while the rest sport the company's latest architecture. These give a new generation of laptops added firepower and, as it applies to the Zen 3 SKUs, double the amount of L3 cache over the previous generation.
Speaking of which... 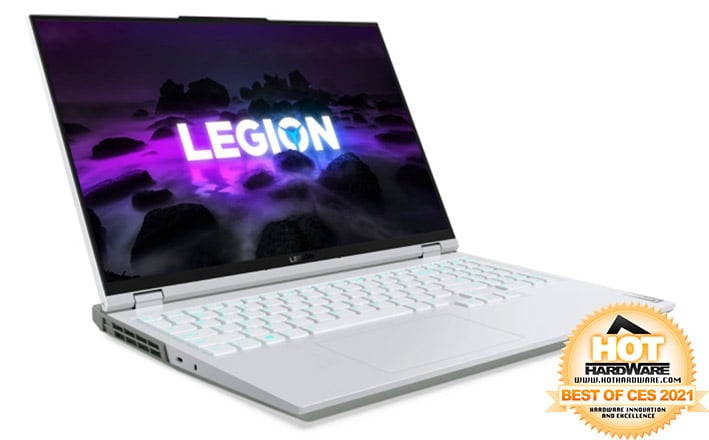 Lenovo wasted no time injecting AMD's Ryzen 5000 series of mobile processors into its laptop lineup, and its Legion 5 Pro is certainly an eye-catching addition. Lenovo seems to have taken a page out of Alienware's design book here, but it's not a clone—the Legion 5 Pro sports a cleaner look. That said, it is the guts of this laptop that have us salivating. It is powered by up to a Ryzen 7 mobile processor based on Zen 3, and paired with the latest NVIDIA GeForce RTX 30 series GPUs. That's right, Zen 3 and Ampere working in tandem, alongside up to 16GB of RAM and 2TB of NVMe SSD storage. And to cap it off, it sports a 16-inch IPS display with a 2560x1600 resolution and G-Sync support (as well as HDR).

Lenovo gets a second nod from us because its Legion Slim 7 laptop is also infused with the latest CPU and GPU hardware, while also purportedly being the "thinnest and lightest gaming laptop in Lenovo Legion" history. Buyers will be able to choose between a 4K resolution display running at 60Hz, or a faster 1080p screen capable of up to 144Hz. Game or create, in other words. All of this skinny laptop goodness comes in a package that weighs just 4.2 pounds. 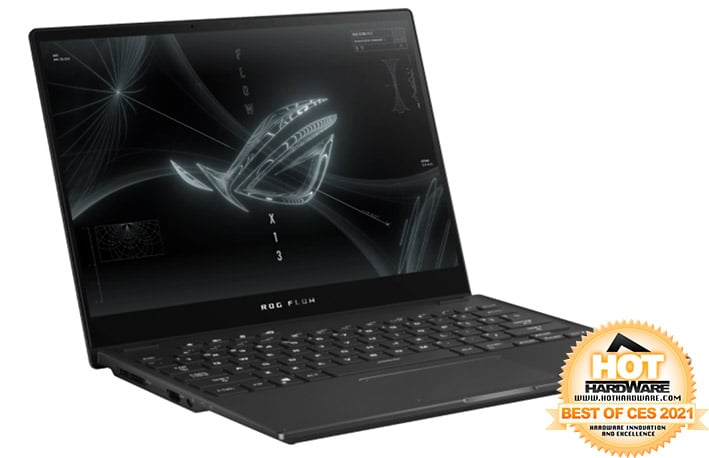 Enthusiasts are well acquainted with ASUS and its Republic of Gamers (ROG) division, because the ROG badge is a tell-tale sign of a performance oriented product. However, the ROG Flow X13 catches our attention because it has the potential to change the way people work and game. Obviously it has a gaming edge, but as a 13-inch 2-in-1 convertible weighing just 2.9 pounds, this could easily pull double duty as a workhorse too. And to that end, it pairs up to an 8-core Ryzen 9 5980HS with a GeForce GTX 1650 GPU. For those who want a bigger graphics punch, this system can be hooked up to an optional (and rather svelte) external XG Mobile eGPU enclosure with up to a GeForce RTX 3080 inside. 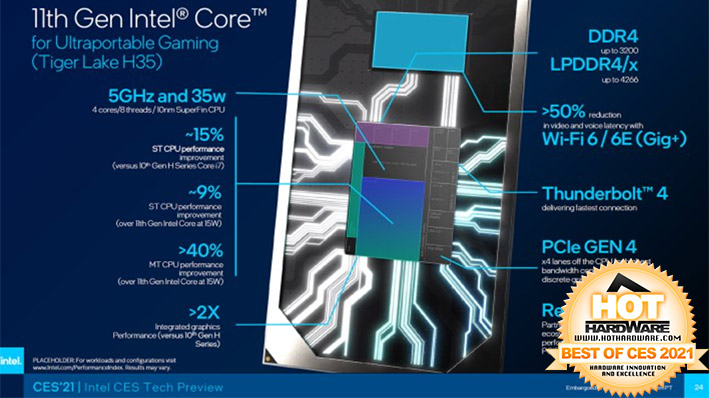 As things currently stand, most high-end gaming laptops currently on the market sport Intel's 10th Gen H-series mobile processors inside. Intel is going to see even more competition from AMD this year, but the company is not standing pat. Just the opposite, it came out swinging at CES 2021 with its 11th Gen H-series based on its 10-nanometer Tiger Lake architecture. The new chips will not only find their way into traditional gaming laptops, but also high performance gaming laptops as thin as 16mm, with NVIDIA's next-gen discrete GPUs inside as well. These will feature the latest technologies too, such as PCI Express 4.0, Thunderbolt 4, Wi-Fi 6/6E, and support for Resizable BAR. Simply put, this is going to be a great year to buy a laptop. 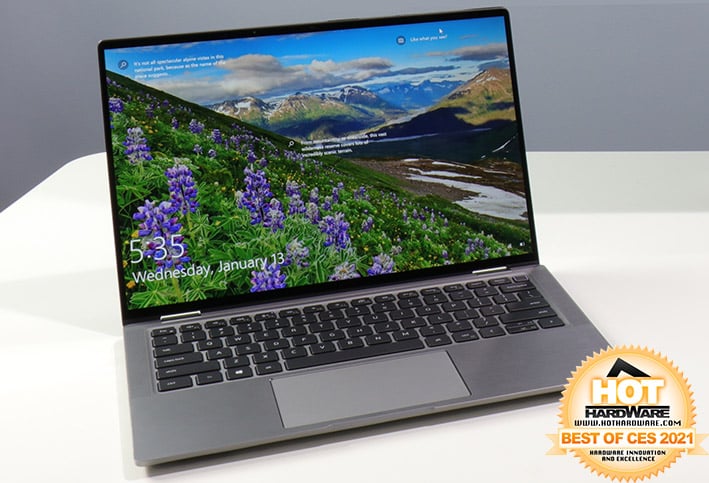 Dell's Latitude 9420 figures to be the OEM's most premium, business-class 14-inch offering, and will sport Intel's brand-spanking-new 11th Gen Core processors (up to a Core i7 vPro CPU) with Iris Xe graphics. There are two panel options—QHD+ (2560x1600) and FHD (1920x1080)—along with 32GB of fast LPDDR4x-4266 RAM and 1TB of NVMe SSD storage. It's a fine collection of hardware, but what sets the Latitude 9420 apart is that it is one of the first OEM systems to feature Intel Visual Sensing Technology. This is powered by an additional companion chip that allows the laptop to detect a person's presence to wake the display automatically, as well as authenticate the user and auto-dim the screen for privacy. 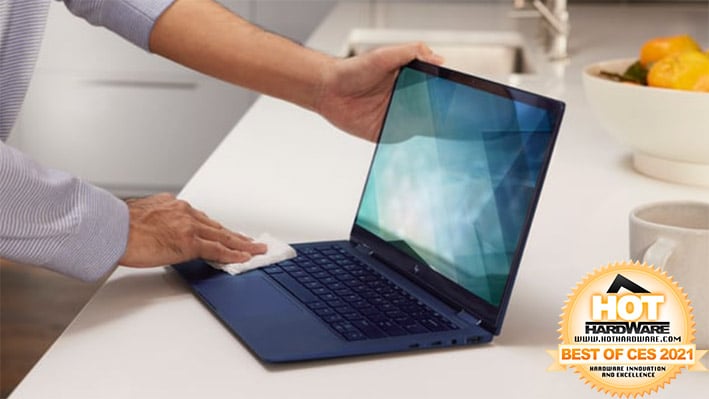 HP has updated its super stylish Dragonfly laptop with new hardware and features. As with the original version, the new Dragonfly G2 takes aim at the business market, serving as a premium 2-in-1 device running Windows 10. However, this is another laptop option built around Intel's newly minted 11th Gen Core Tiger Lake U-series processors (Core i3, Core i5, and Core i7) with Xe graphics in tow. It features a 13.2-inch display, offered in 4K and Full HD variants. The Dragonfly G2 also offers generous connectivity options, including Wi-Fi 6, Bluetooth 5.0, and optional 4G LTE (Intel XM 7360) or 5G (Qualcomm Snapdragon X55) cellular. 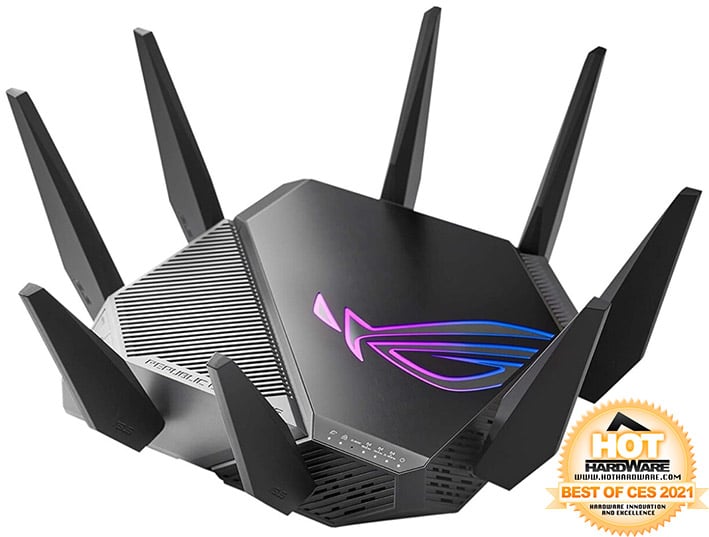 ASUS makes our list for a second time with its ROG Rapture GT-AXE 11000 wireless router. Not only does it look menacing, it takes advantage of the latest Wi-Fi 6E standard, which throws a 6GHz band into the mix (in addition to 5GHz and 2.4GHz). The benefit of another frequency to work with is it makes things less crowded across the board, so all of your fancy wireless devices can hum along in harmony rather than fighting each other for bandwidth. It also offers multi-gig wired networking (2.5Gbps), WAN aggregation, faster processing, more memory, and custom QoS controls to accelerate game traffic. 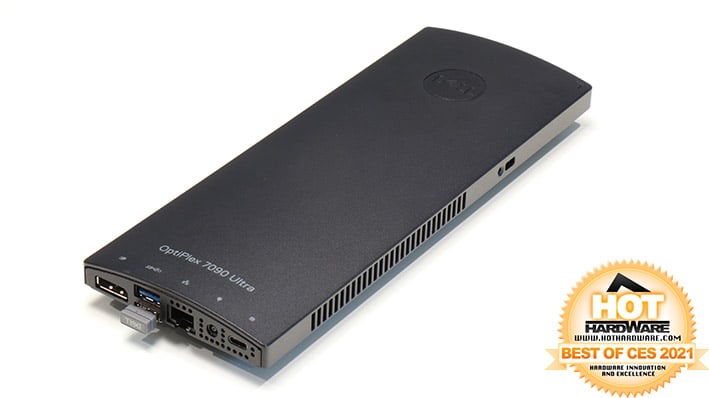 We are completely infatuated with the idea of cramming an entire PC into a module that slips seamlessly into a monitor stand, creating the illusion that it does not even exist at all. 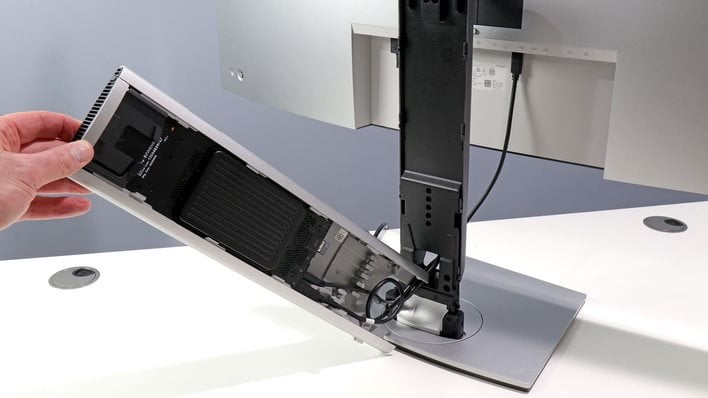 And that is what Dell delivers with its OptiPlex 7090 Ultra. This is essentially an upgraded version of the OptiPlex 7070 Ultra we reviewed last year. For this year's model, Dell gutted the inside and built it back up with Intel's 11th Gen Core Tiger Lake CPUs and Xe graphics, while retaining the same nifty form factor that makes this so intriguing. Good stuff. 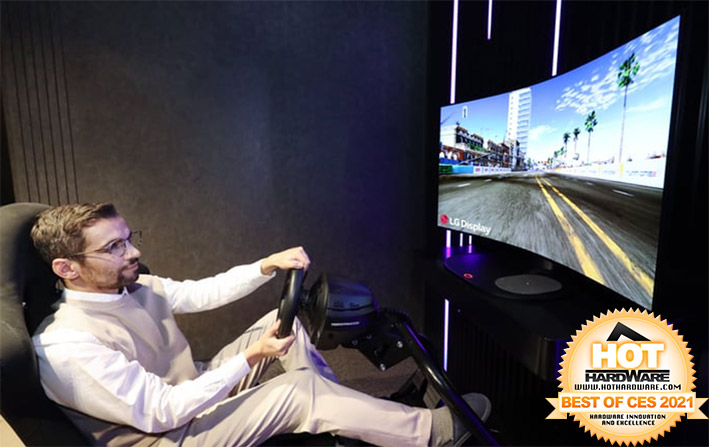 Sure, LG's 48-inch Bendable Cinematic Sound OLED (CSO) does not exactly roll off the tongue, but that's okay, we're excited about this one all the same. Why so? This is anything but just another OLED display. For one, it's an OLED gaming monitor, and those are few and far between. But it also renders the argument of which is better, a curved or flat screen, completely moot. That's because it functions as both. If you want, you can orient it flat when watching a movie or TV show, and then bend it while gaming, if you find that a curved screen offers a more immersive experience. It also supports an adaptive refresh rate (40Hz to 120Hz), making this a potentially excellent fit for the latest generation game consoles and PC GPUs alike. Oh, and did we mention it functions as a speaker, too?The entire panel can vibrate to produce sound (without shaking the screen, presumably), so it sounds like speech and other audio effects are coming right from the screen (because they are). Nifty! 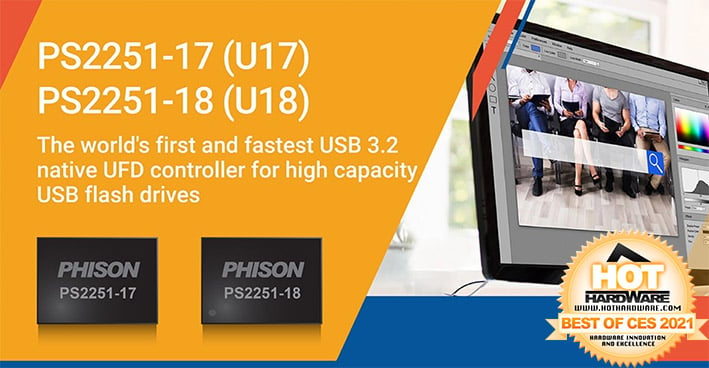 Look, we're geeks of the highest order, and so don't be surprised that we are highlighting a pair of USB controller chips as standouts among CES 2021. Phison's new PS2251-17 (U17) and PS2251-18 (U18) deserve kudos as "the world's first and fastest USB 3.2 native UFD controllers for high capacity USB flash drives." Beyond the marketing hype, these are devices that will enable tiny thumbstick-sized external drives in capacities of up to 4TB hit blazing fast speeds—up to 1,900MB/s for reads and 1,700MB/s for writes. Yes, please! 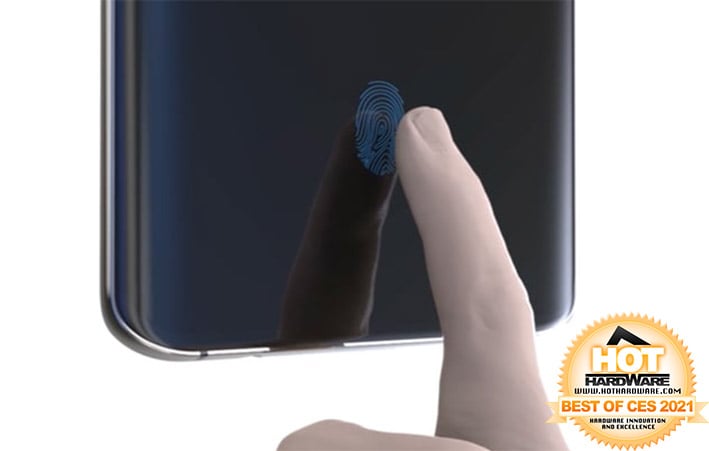 One of the more low-key announcements at CES is deserving of a louder shout out, that being Qualcomm's second-generation 3D Sonic Sensor. It's an upgraded version of the in-display fingerprint reader that is one of the best and perhaps most underrated developments in the smartphone space. The Gen 2 sensor introduced at CES 2021 is 50 percent faster and captures 1.7x more biometric data that the first-gen version. It also boasts a surface area that is 77 percent larger. Qualcomm says its Gen 2 sensor will make its way to smartphones early this year. The entire Galaxy S21 family will feature this technology, for example.
That does it for our Best of CES 2021. We are eager to test as many of these products as we can throughout the year, so be sure to check back often if you're thirsty for more.