Qualcomm made waves last month when it announced its new Snapdragon 888 5G Mobile Platform, which will power 2021's best flagship smartphones. However, this week at CES 2021, the company made a more low-key announcement related to biometric authentication. The company says that its 3D Sonic Sensor Gen 2 is now readily available for customers to incorporate into their smartphone designs. 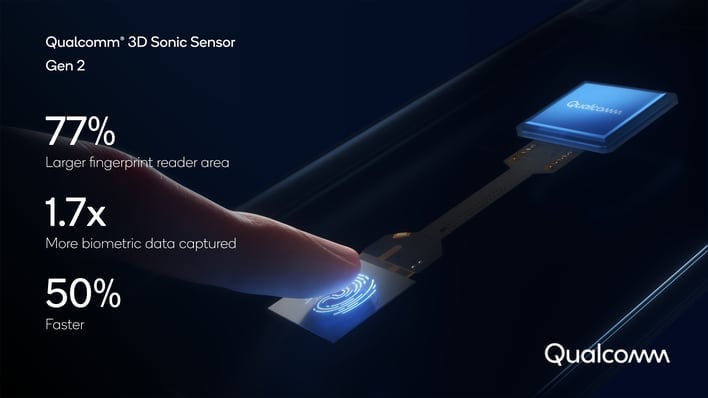 The Gen 2 sensor improves upon its first-generation counterpart -- which was used in both the Galaxy S10/Note 10 and Galaxy S20/Note 20 families – with a surface area that is 77 percent larger. The Gen 1 sensor measures 4x9mm, while the Gen 2 sensor measures 8x8mm. The larger surface area of the sensor means that it should be easier for you finger to be properly scanned on the first try, instead of the multiple attempts that can sometimes occur with the current-generation sensor.

In addition, Qualcomm says that the sensor is 50 percent faster, which should speed up the process of unlocking your smartphone or authorizing secure wireless payments (among other things). The sensor itself is only 0.2mm thick, which gives it an advantage over optical sensors typically used on competitive offerings from Synaptics and Goodix.

Qualcomm says that the 3D Sonic Sensor Gen 2 will makes its first appearance in smartphones in "early 2021", but given that Samsung was the primary client for Gen 1 sensor, we have the feeling that the Galaxy S21 family will take advantage of the Gen 2 sensor. The Galaxy S21, Galaxy S21+, and Galaxy S21 Ultra will be the first smartphones available in the United States with the Snapdragon 888 when they are announced this Thursday at Galaxy Unpacked 2021.