AMD CEO Dr. Lisa kicked off the company’s highly-anticipated CES 2021 keynote with some discussion about the importance of high-performance computing and the gaming industry in general. She talked about the latest AMD-powered game consoles and the recent launch of the Radeon RX 6000 series, otherwise known as “Big Navi”. Dr. Su also used the big stage to chat with a number of key AMD partners, like Panos Panay, Microsoft Chief Product Officer; HP’s President and CEO Enrique Lores, François Chardavoine; the head of technology for Lucasfilm and ILM; Lewis Hamilton and Toto Wolff from Mercedes; and Lenovo Chairman and CEO Yang “YY” Yuanqing.

Over the course of her initial talk, Dr. Su also hinted at a few upcoming products. She revealed that RDNA 2-equipped gaming laptops and mainstream Radeon RX 6000 series cards (presumably the Radeon RX 6700 series), were coming at some point during the first half of this year. She even showed off an RDNA 2 gaming laptop running Codemaster’s Dirt 5 at 1440p, with high-quality image settings, at over 50 FPS. 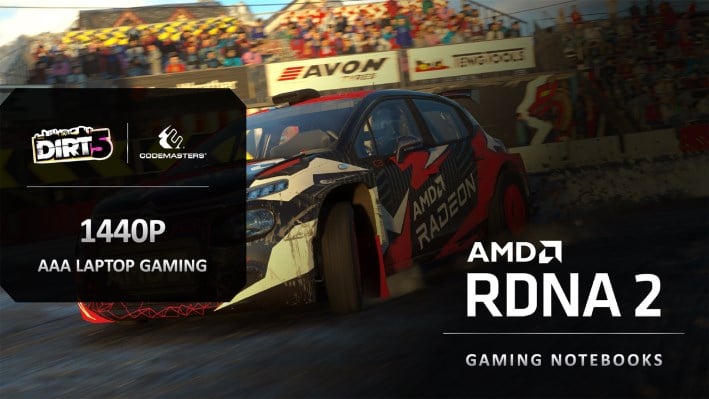 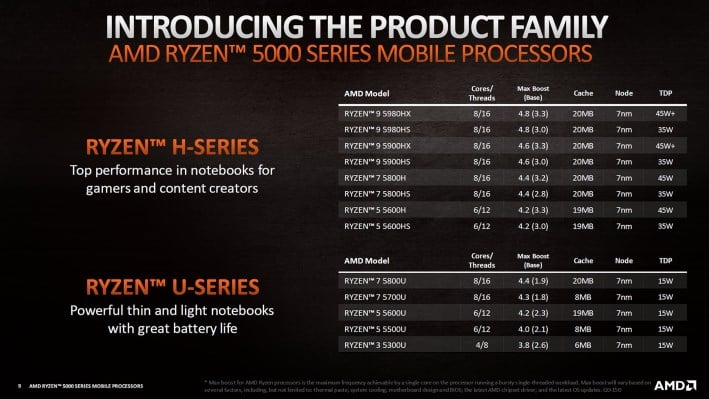 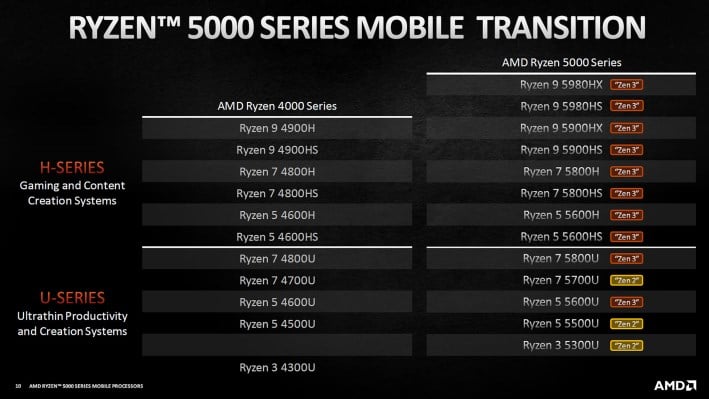 In total, there are 13 processors in the initial Ryzen 5000 Series Mobile processor lineup, most of which are Zen 3-based -- a trio of Zen 2 processors remain in the mix. All of the processors are manufactured at 7nm and the top SKUs continue to have a maximum of 8-cores (16-threads). The inherent benefits of the Zen 3 architecture, in addition to further power and frequency optimizations, and higher typical frequencies significantly boost performance, however, and AMD’s making some bold battery life claims as well.

Like the 4000-series, Ryzen 5000-series Mobile Processors are split into H- and U-series parts. The H-series are the higher-performance processors destined for gaming notebooks and mobile workstations, while the lower-power U-series targets thin-and-light form factors and extended battery life. 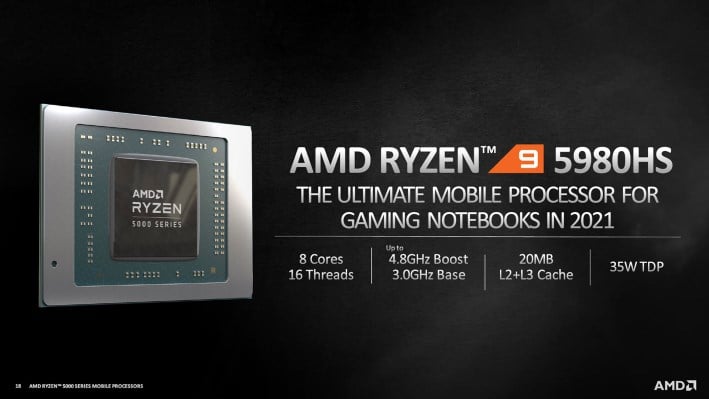 At the very top of the stack is the Ryzen 9 5980HX. The Ryzen 9 5980HX is an 8-core / 16-thread processor, with 20MB of cache, a 4.8GHz max boost clock, and a >45W TDP. The 5980HS is essentially the same processor, scaled back slightly to hit a 35W TDP. You’ll see a similar trend through the rest of the stack with HS (35W) and H (45W) processors having similar configurations, but different frequencies. The top-end HX 45W+ processors are also completely unlocked for desktop-like overclocking. AMD claims that these processors will be in the lion’s share of high-end gaming notebooks in 2021.

The Ryzen 5000 H-series consists solely of 6-core/12-thread and 8-core/16-thread processors. The Ryzen 5000 U-series, however, scales from 4-cores/8-threads on up to 8-cores/16-threads. The U-series is also more varied, because three of the processors in the stack are based on the older Zen 2 architecture, and as such, have different cache and CCX configurations, and different features. 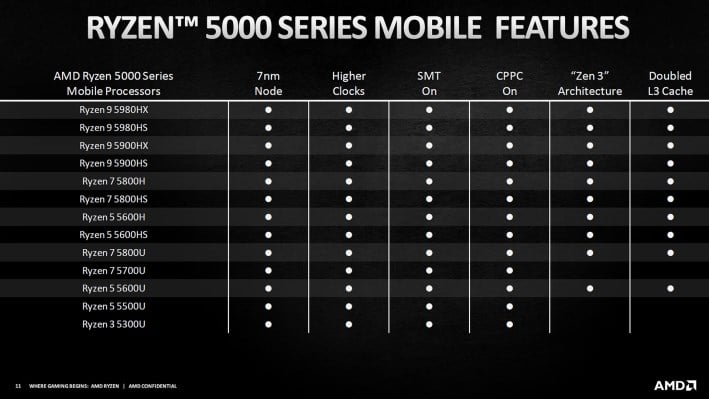 In terms of their feature set, all of the processors in the Ryzen 5000 Mobile series keep the same Vega-based iGPU as the 4000-series, but these new processors have higher-clocks. The faster CPU cores and increased cache, in addition to better power state management and more precise frequency selection, should result in somewhat improved graphics performance, however. All of the processors also have SMT enabled, and Collaborative Processor Performance Control (CPPC) for is now enabled on mobile as well. The processors based on Zen 3, however, also have double the L3 cache vs. Zen 2 and the unified 8-core CCX config, versus a dual 4-core CCX. 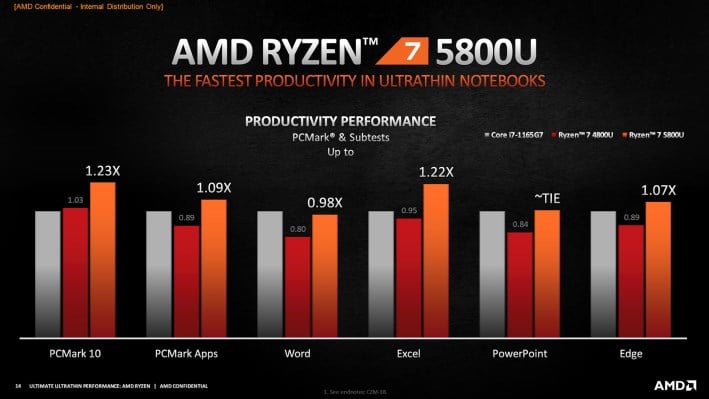 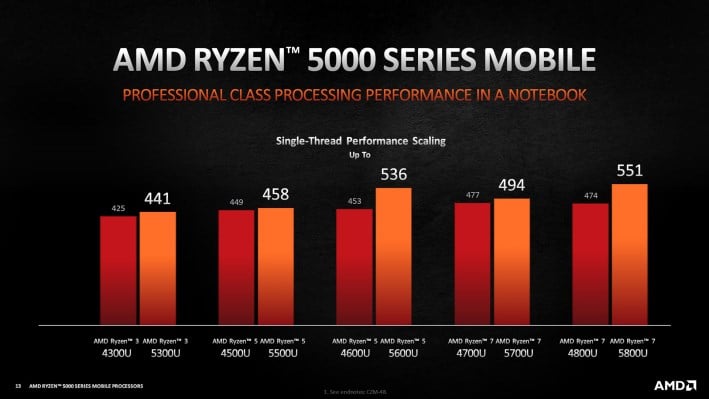 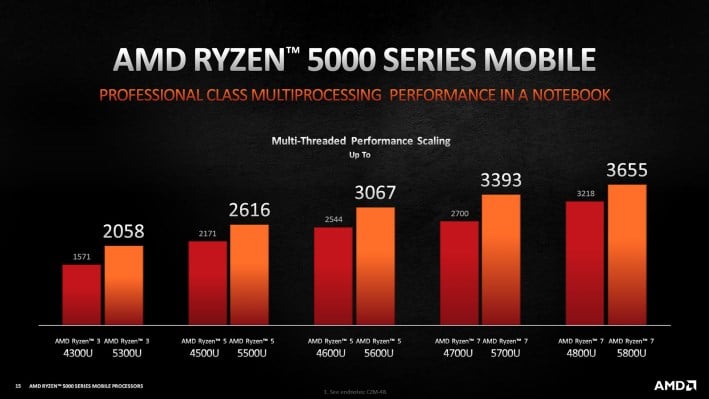 AMD is claiming big performance gains across the board. Ryzen 5000 Series Mobile processors offer significantly better single-and multi-thread performance versus their predecessors. And AMD is claiming U-series supremacy in productivity workloads with ultrathin notebooks versus Tiger Lake as well. 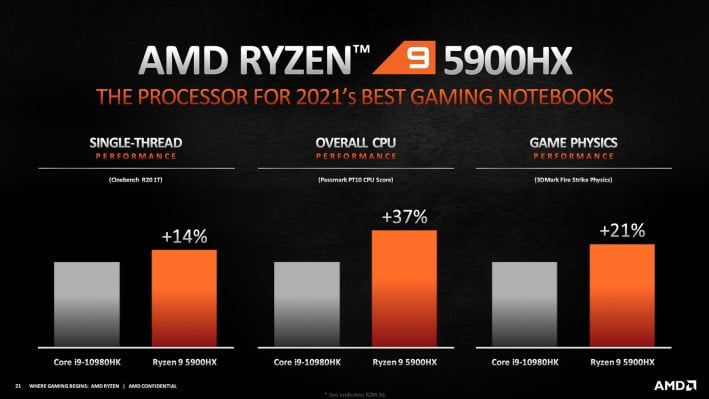 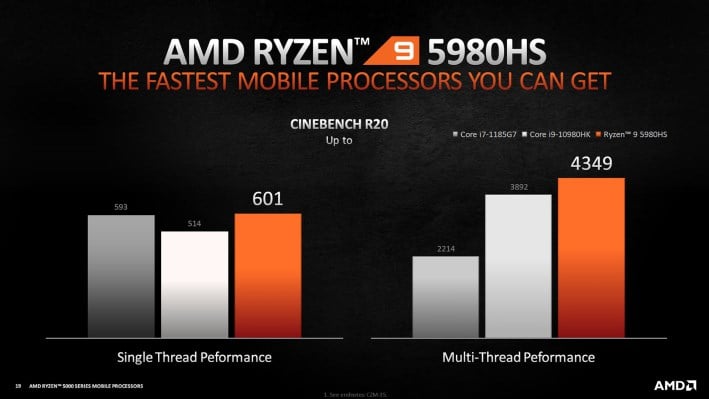 AMD is making bold performance claims with HX- and HS-Series Ryzen 5000 Mobile processors too. Versus Tiger Lake and Comet Lake, AMD’s data shows the Ryzen 9 5980HS and/or the Ryzen 9 5900HX outpacing Intel’s current best in both single and multi-threaded workloads. 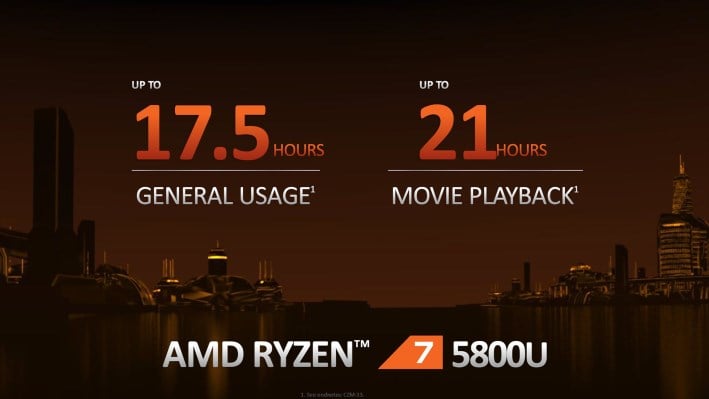 And all of that performance doesn’t come at the expense of battery life, apparently. AMD is claiming Ryzen 7 5800U-based notebooks will offer up to 17.5 hours of battery life during general use and up to 21 hours during movie playback. Those numbers were captured on a Ryzen 7 5800U-based machine, with a 53WHr battery and 1080P display, during video playback or running MobileMark 2018. 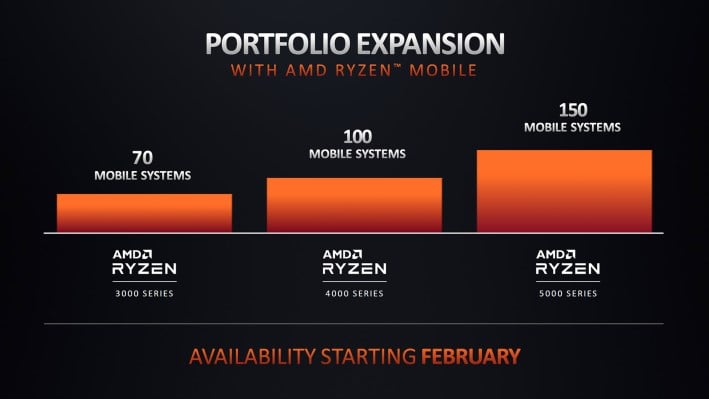 All of the goodness coming with Ryzen 5000 Series Mobile processors has also resulted in a significant uptick in design wins according to AMD. The company is claiming a 50% expansion of its mobile portfolio, with 150 Ryzen 5000 Series mobile systems on the way, with availability starting next month. 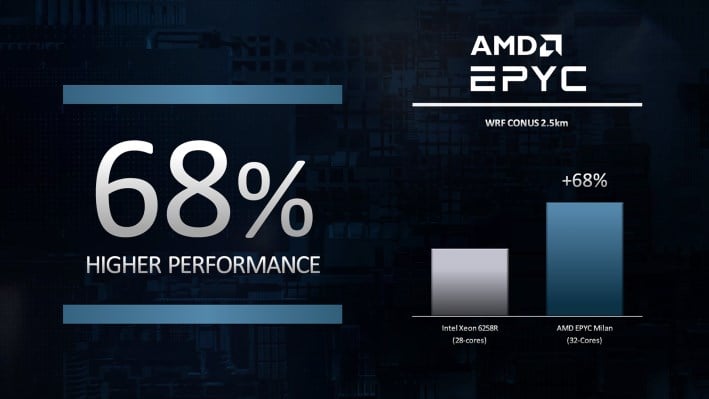 Milan-based 3rd Gen EPYC processors are due to arrive later this quarter.

All told, AMD seems positioned well to make significant gains in the mobile space with the new Ryzen 5000 Series Mobile processors and Milan appears to be strong as well. Though Intel is making some big moves this year in virtually all market segments as well, AMD seems to be keeping its promises and shows no signs of slowing down in 2021.