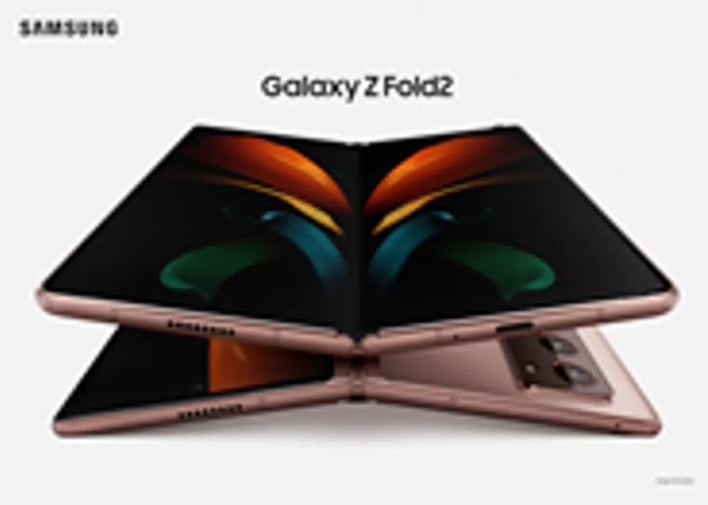 Samsung’s 2020 “Galaxy Unpacked” event will soon be upon us, and the word on the street is that the Galaxy Z Fold 2will be making an appearance after all, following reports that it had been delayed. Confirmation of the device’s appearance at the online event comes from Samsung itself via a leaked render.

One other thing that catches our eye is the Cover Display, which looks much larger this time around and takes up much of the “folded” section of the smartphone (unlike its predecessor, which looked awkwardly small when folded). This time around, the Cover Display is rumored to measure in at a more generous 6.23 inches with a resolution of 2267x819 versus 4.6 inches on the original Galaxy Fold.

As for the primary folding display, it’s rumored to increase in size from 7.3 inches to 7.7 inches with a resolution of 2213x1689. In addition, the panel is reportedly getting an upgrade from 60Hz to a 120Hz refresh rate. The display panel is said to be protected by the same type of Ultra-Thin Glass introduced initially on the Galaxy Z Flip for added durability.

Given its “flagship” status, it’s likely that the Galaxy Z Flip 2 will use either the Qualcomm Snapdragon 865 or recently introduced Snapdragon 865+ SoC with boosted CPU/GPU clocks. Whichever SoC Samsung chooses, a Snapdragon X55 5G modem will be along for the ride with at least 12GB of RAM onboard. We also hope that this second-generation model will be priced somewhat below its predecessor, which debuted at $1,980

Samsung’s Galaxy Unpacked event will take place virtually on August 5th, and other devices on tap for the show include the Galaxy Z Flip 5G and Galaxy Watch 3.