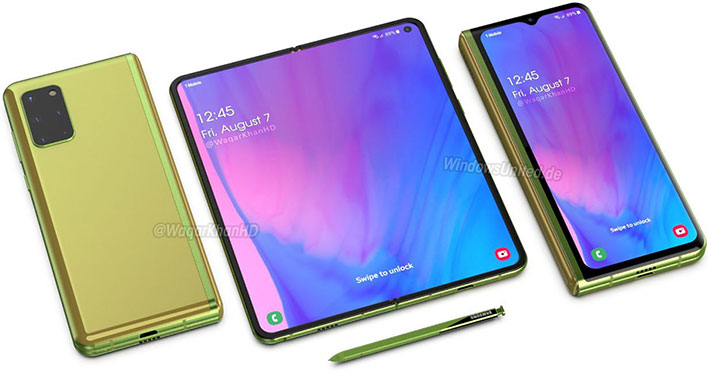 Rumors have been swirling about a second generation Galaxy Fold 2 device for several months now. Unless it has all been a bunch of hogwash up to this point, the Galaxy Fold 2 will sport a bigger display than the first generation model. Hopefully it will arrive without the design hiccups as well, but either way, it is looking like the handset will bring a massive 7.7-inch screen to the table.
For reference, the first (current) generation Galaxy Fold features a 4.6-inch display with a 1680x720 resolution when folded, and a 7.3.-inch screen with a 2152x1536 resolution when opened up. It also touts a Qualcomm Snapdragon 855 processors, 12GB of RAM, 512GB of onboard storage, and either a 4,380 mAh (LTE) or 4,235 mAh (5G) battery.

The persistent rumor has been that the Galaxy Fold 2 will arrive with a larger display, and according to prominent tipster Ice Universe, it will check in at 7.7 inches. The tipster also says the bezel will be a scant 3.8mm, so it could actually be a smaller, more nimble device. And for the camera, the Galaxy Fold 2 is said to arrive with a 4.8mm punch hole.
Hearing this from Ice Universe is as close to a confirmation as we can get, short of an actual announcement from Samsung. As to what it might look like, the folks at Windows United created some renders (shown up top) based on "previous patent documents, rumors, and inside information," all of which also point to a 7.7-inch display when unfolded.
According to the site (via Google Translate), the Galaxy Fold 2 will "completely eliminate first generation errors." In other words, Samsung is said to have a handle on the design of the Galaxy Fold 2. This is opposed to the first Galaxy Fold, which stumbled out of the gate with a number of glaring design flaws, before being re-released.
Samsung is expected to formally introduce the Galaxy Fold 2 (and its upcoming Galaxy Note 20 series) during an event in August.