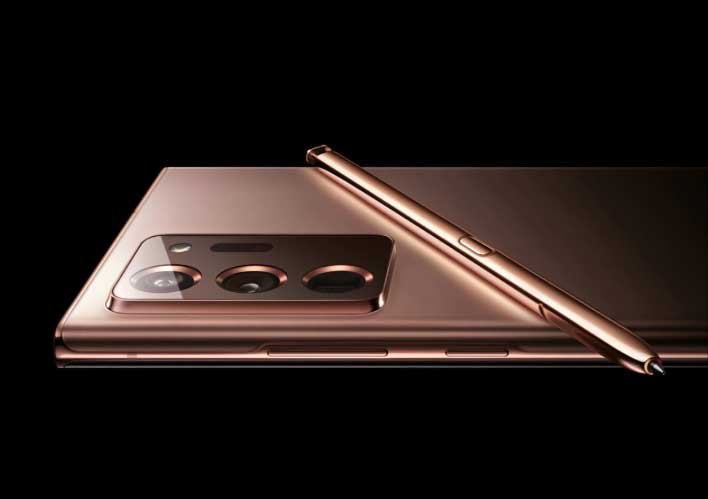 Samsung has taken to Twitter to confirm the date for its Unpacked event that will undoubtedly bring new smartphones (and more) for fans to enjoy. The teaser event shows a copper-colored stylus with a bit of liquid dripping off the tip and splattering on a white surface. The only text reads "Power - a new form for a new norm. Unpacked on August 5, 2020." The tweet also carries the hashtag #SamsungEvent.

As for what device Samsung may be teasing with the copper-color dripping off the stylus, if we had to bet we'd say it's the Galaxy Note 20 Ultra that leaked at the beginning of the month. The device that turned up in that leaked image, which can be seen above, has what appears to be the same exact stylus (and coloring). =

Power – a new form for a new norm. Unpacked on August 5, 2020. #SamsungEvent pic.twitter.com/DtwxXXurNP

The Galaxy Note 20 Ultra leak happened on July 1 and shows a device with a different form factor that's larger and has square corners. While no hardware details leaked with the image, we can glean a little from looking at the picture. It appears to have a pair of standard camera sensors on the back and a periscope sensor stacked at the bottom of a triple sensor camera array. One of those main camera sensors is expected to feature 108-megapixel resolution.

Rumors have suggested that hardware will include a Snapdragon 865 or 865+ SoC, and at least 16 GB of RAM. The screen is expected to have a 120 Hz refresh rate and QHD+ resolution using LTPO technology. August 5 was rumored to be the date for the Unpacked event, which has now been confirmed. Also expected to debut at the event are the Galaxy Watch 3, Galaxy Z Flip 5G, and the Galaxy Z Fold 2.