Judging by the performance of the Radeon RX 7900 XTX, AMD's RDNA 3 architecture is a strong step up over its previous-generation RDNA 2 GPUs. It offers a huge leap in ray-tracing performance as well as improved power efficiency.

Improved efficiency is a huge boon in mobile applications, so it's no surprise that AMD is being aggressive about bringing the new architecture to bear in the laptop market. As part of its CES 2023 announcements, AMD unveiled the first RDNA 3-based Radeon GPU for laptops. There's four separate models, but all four are based on the same silicon base, code-named Navi 33. 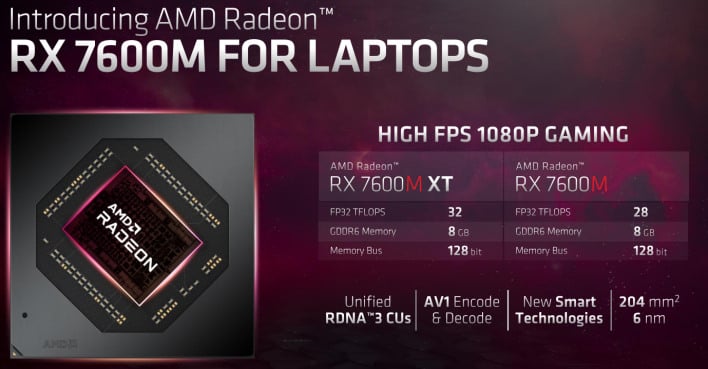 First up we have the Radeon RX 7600M and its "XT" form. These are RDNA 3 GPUs with 28 and 32 compute units, respectively, which gives them shader counts of 1,792 and 2,048. AMD doesn't disclose clock rates, but says that the GPUs can produce 28 and 32 TFLOPs of FP32 compute. With those specifications, these GPUs aren't adding up for us math-wise versus performance, so we've asked AMD for further clarification.

AMD's specifications table (reproduced at the end of this post) shows that these GPUs are using 16 Gbps (for the RX 6700M) or 18 Gbps (for the "XT") GDDR6 memory. 8GB is a great amount for mid-range GPUs like these, and the relatively high transfer rate gives them 256GB/sec and 288GB/sec of memory bandwidth—solid specs for the 1080p gaming these engines are meant to crunch on. 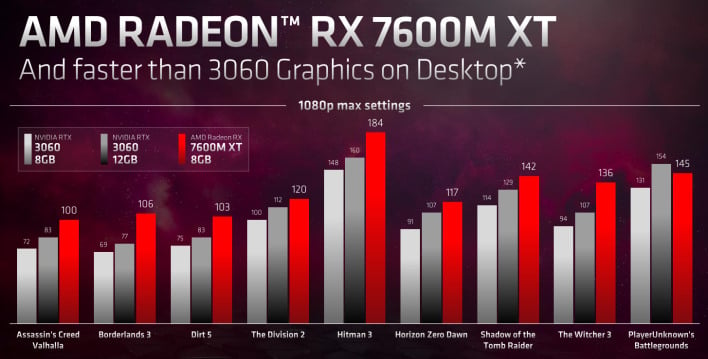 Representatives from the company told us that the Radeon RX 7600M XT can approach the performance of a mobile Geforce RTX 3080 in some tests. While that may be true, the company's own numbers pit the new GPU against the laptop-borne 8GB version of the GeForce RTX 3060 as well as the 12GB desktop version.

AMD's new part generally comes out ahead in these numbers, but laptop GPU performance is often as much about power budget and cooling as it is about processor configuration. Without knowing the power budgets or testing environments, we'll stop short of drawing any specific conclusions until we get retail machines in for testing. 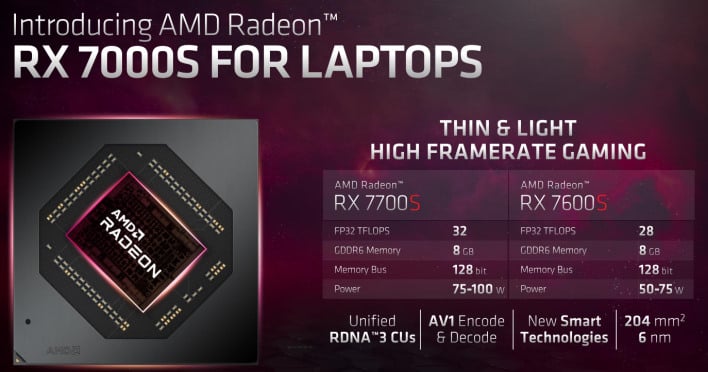 In a somewhat strange product naming decision, the other two products based on Navi 33 are the Radeon RX 7700S and RX 7600S. These appear to simply be the RX 7600M XT and RX 7600M with slightly tighter power limits applied.


AMD already uses the "S" suffix to indicate GPUs with optimized performance for low-power, low-thermal budget configurations. In that sense, it's sort of like the way NVIDIA used to use the Max-Q branding. 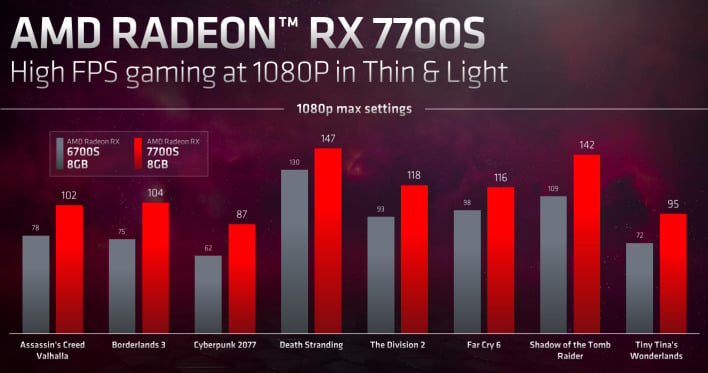 AMD promises "high-FPS gaming in 1080p in Thin & Light", which sounds like a promising prospect. After all, while your hardcore PC gamers sneer at 1080p resolution, it looks a lot nicer on a smaller laptop display. The Radeon RX 7700S' performance numbers in the benchmarks presented are nearly identical to the ones for the RX 7600M above, which probably shouldn't be surprising in light of the fact that they are fundamentally the same GPU. 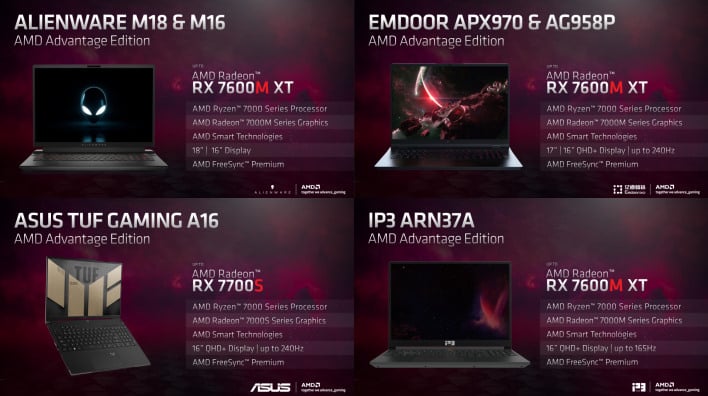 AMD showed forthcoming laptops from four vendors, which we've reproduced in this barely-legible collage that you can click to view in full-resolution. It's encouraging to see AMD finding more market partners, because the last-generation Radeon mobile GPU offerings could be hard to find.

All four of these are "AMD Advantage" models, which means they come with AMD hardware for both CPU and GPU duties. That also means that they can enjoy all of AMD's "smart" technologies, like Smartshift and SmartAccess. 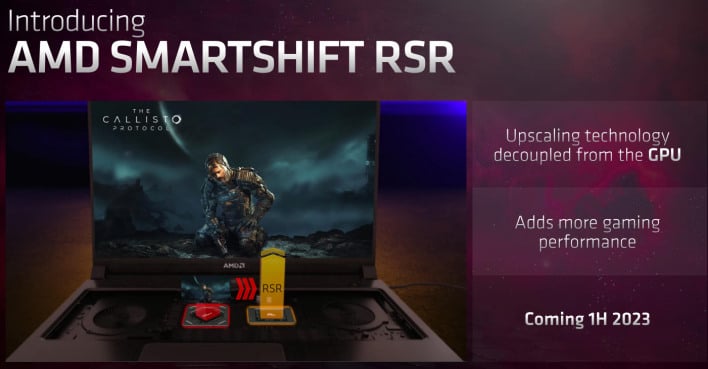 Speaking of Smartshift, there's a new mode on the way known as Smartshift RSR. RSR is presumably "Radeon Super Resolution," a fancy name for GPU upscaling done using FidelityFX Super Resolution (FSR) at the driver level. In essence, you run a game at a lower resolution and the GPU upscales it with FSR to the display resolution for improved performance at similar visual fidelity.

Smartshift RSR, then, is a new hybrid graphics mode that does all of the rendering on your fast discrete GPU, then sends it to the integrated GPU to be upscaled before presentation on the screen. This takes the load of upscaling off of the discrete GPU, theoretically improving game performance, but we have to wonder how it works if your laptop includes a MUX that directly connects the GPU and its display. It will be interesting to see how this works in practice but it sounds promising to be sure. 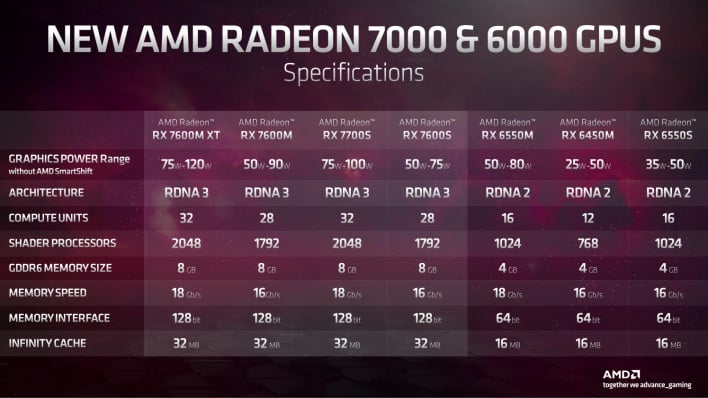 Finally, here's the full specifications table for AMD's mobile GPUs this year. The new chip solutions are in the white box, obviously. As AMD notes, the power limits here don't take into account the extra 25 watts that GPUs can gain in AMD Advantage laptops by using Smartshift to siphon power from the system's CPU. That means that the Radeon RX 7600M XT is potentially a 145W GPU.

We asked AMD when Navi 33 would be coming to desktops and the company declined to answer. That's unfortunate, because a GPU like this, reasonably-priced, is exactly what the desktop GPU market needs right now. Hopefully the company can start slapping these GPUs on PC graphics cards sooner than later. 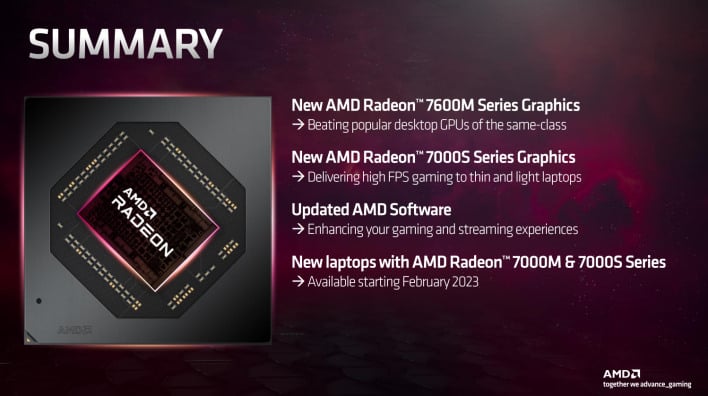 If you like what you see from Navi 33, you don't have long to wait. AMD says that laptops sporting these GPUs should start showing up in February, alongside its Dragon Range mobile processors.