2021 was a big year for graphics, despite all the shortages, in large part thanks to dueling upscaling technologies. While NVIDIA's Deep Learning Super Sampling gets a lot of attention, Fidelity FX Super Resolution knocked our socks off thanks to its vendor-agnostic approach and open source license. The company is looking to push that advantage into 2022 with a boatload of new driver features. Right alongside all the new hardware that AMD has announced at CES is an updated version of its driver software, Radeon Adrenaline Edition 2022.

AMD says great hardware needs great software, and touted its past achievements over 2021 where the company points out no fewer than 22 new features were introduced to its drivers. We might have lost count on that for ourselves, but there was certainly an awful lot. The company also says that in many games, performance has been pushed as high as 15% higher than it was at launch, something that Radeon owners no doubt appreciate. Over the course of 2021, AMD published day-one drivers for more than 40 high-profile titles, and says that for 2022 it wants to do even more. 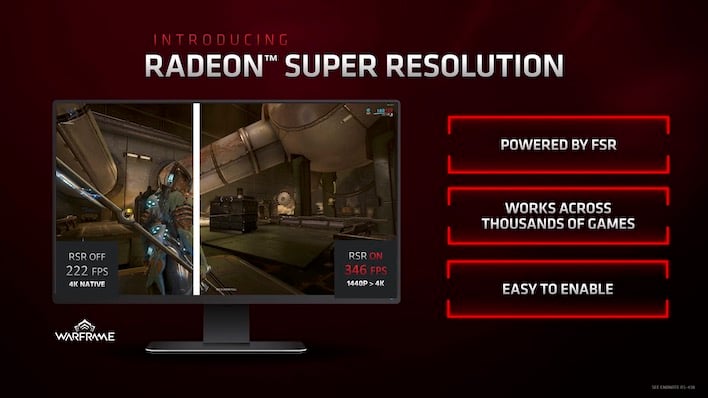 No doubt the biggest feature of the bunch from 2021 is FSR, which AMD released as an open-source, vendor-agnostic answer to NVIDIA's DLSS that can be quickly added to games with a simple shader library that gets injected before drawing the HUD. At its launch, gamers clamored for a global toggle, but AMD couldn't provide it at the time because of where it sits in the rendering pipeline. A couple months later, the green team fired back with NVIDIA Image Scaling, which can be toggled in the driver instead of requiring game support, with the caveat that the HUD would be upscaled as well. Since all that takes is checking a box and setting a lower resolution in a game, it doesn't get much easier.


And now in 2022, just as it was rumored a few days ago, AMD announced it is releasing Radeon Super Resolution later in the first quarter to bring parity to the shader-based upscaling arms race. RSR is FSR at the driver level. Powered by the FSR shader library, RSR will work with "thousands of games," according to AMD, thanks to a toggle and quality selector in the driver control panel.
No additional work is required from game devs to support RSR, but the same caveat that applies to global NIS applies here: RSR is applied to the whole image before it's drawn to the screen, so the HUD will be sharpened and scaled just like the rest of the image. FSR looks great in games that support it, and we're hoping that RSR can follow in its footsteps. 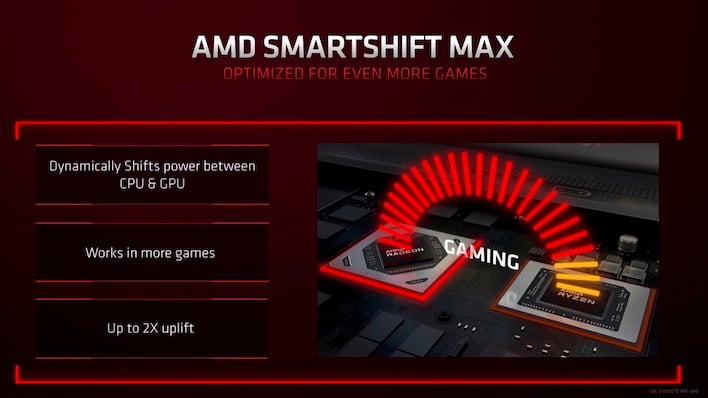 The software component needed to drive the performance and power-saving gains seen in the latest mobile GPUs will also appear in the Adrenaline driver. SmartShift isn't new, as it appeared in the 2020 Dell G5 15 SE; AMD's unique position supplying both CPUs and GPUs allow its drivers to re-balance thermal budgets to graphics or processor power based on the performance need. This is being expanded to many more games, and AMD says it can double the performance gains through a revised version dubbed SmartShift Max, which is a feature baked into both the newest Radeon 6000S and 6000M GPUs as well as the new Ryzen 6000 series CPUs the company announced at CES 2022. 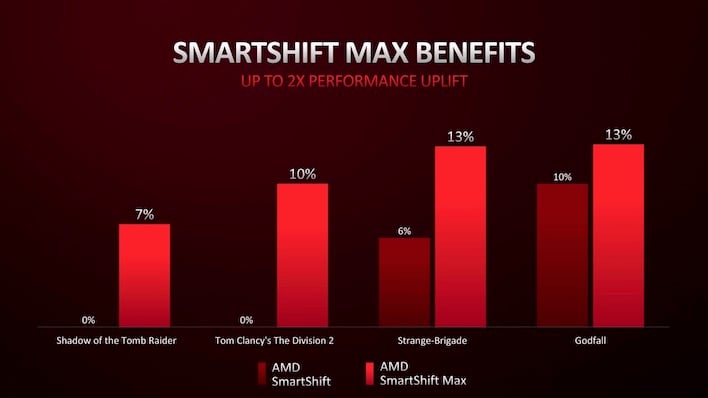 AMD showed off what SmartShift Max can do in its own internal benchmarks. In a few cases, like Shadow of the Tomb Raider, the original version of SmartShift didn't really seem to do as much as it could, where SmartShift Max can boost performance by shifting the thermal budget to where the bottleneck is. Often times the CPU is sitting idle waiting for a thermally constrained GPU to catch up, and now AMD's software is smarter about giving the side that needs it some breathing room. 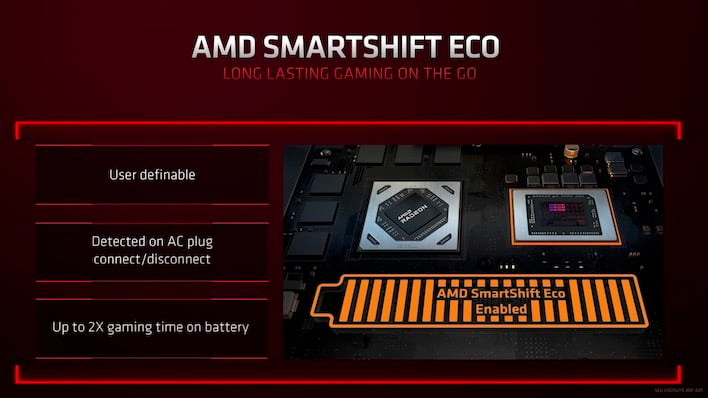 On the other end of the power spectrum, AMD's SmartShift Eco will automatically save power consumption when it's needed most. A user-configurable performance and power threshold can be set in the drivers, and AMD says this can double the endurance of a typical gaming notebook battery while unplugged. SmartShift Eco detects when the system is disconnected from power and thoughtfully kicks on and off automatically. 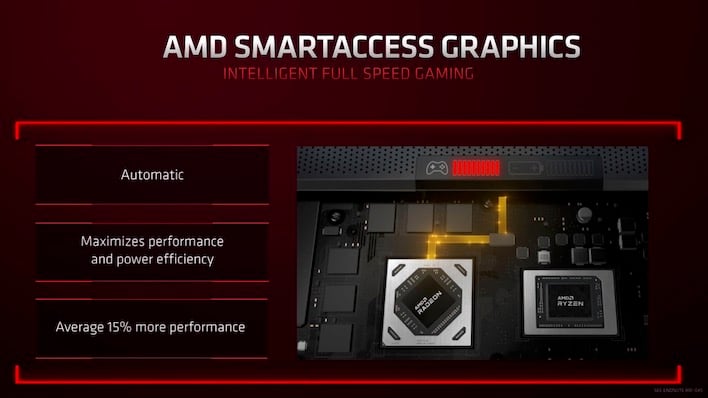 Last up is AMD SmartAccess Graphics, which seeks to address overhead caused by routing discrete GPU output through the CPU's built-in graphics processor. AMD says that not only does this incur a performance penalty, it also introduces latency since the integrated GPU has to process whatever is coming from the discrete graphics processor. SmartAccess Graphics will give discrete GPUs a direct line to the display via an intelligent switch. If the discrete GPU is in use, it will output to the laptop's display and built-in outputs directly, and can provide as much as a 15% performance uplift.

Some PCs have features that detect when your eyes are on the screen or looking elsewhere. For example, several laptops with infrared cameras used for Windows Hello, including the Dell Latitude 7320 Detachable, have the ability to detect if your eyes are looking at the screen, and get aggressive about power saving if they're not. AMD has taken that a step further by baking Privacy Guard into the driver control panel.
Going a step farther than just detecting whether you're looking at the screen, AMD Privacy View knows where you're looking, and can blur out other areas of the screen. This makes working in a coffee shop, other public areas, or on an airplane less of a security risk, since it's harder for someone to look over your shoulder and read the entire screen. All that's un-blurred is where your focus is. 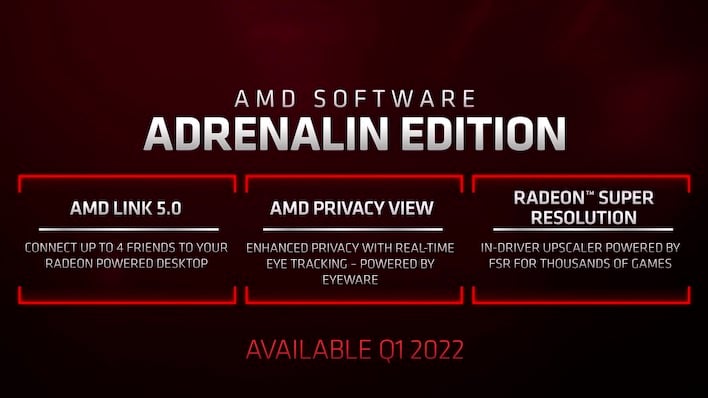 AMD Privacy View might seem kind of dull compared to more exciting performance enhancement technologies, but AMD is banking on this sort of thing being a differentiator to set their products apart not just from NVIDIA but also Intel, which ships loads of notebook graphics processors just embedded into its CPUs. Just like Radeon Super Resolution, AMD plans to ship Privacy View in its drivers sometime in the first quarter. One last feature that AMD mentioned is AMD Link 5.0, a new version of its in-home streaming software, which will ship later this year.

It's an exciting time to be an AMD fan, with new CPUs, GPUs, and loads of software features coming in the early part of this year. Stay tuned to Hot Hardware for the latest as these new products and features start shipping to a PC near you.